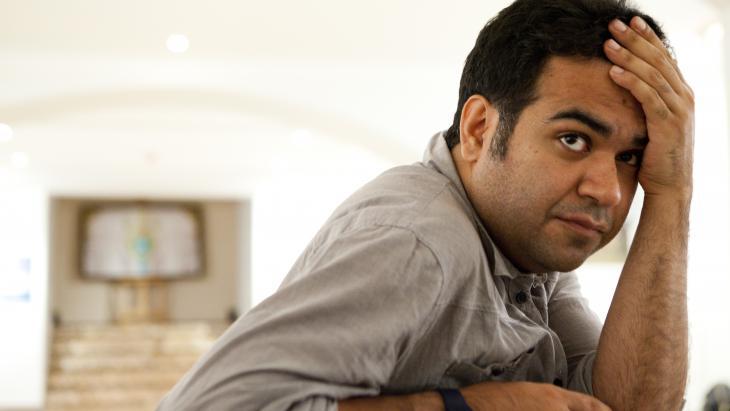 "In Iran, art fills a void"

Amir Reza Kohestani is currently the most sought-after theatre director in Iran. David Siebert talked to him about censorship, the enthusiasm for theatre among young Iranians and the new cultural freedom under President Rouhani

You began studying in Manchester in 2007. When the Green Movement emerged in Iran two years later and tens of thousands of Iranians began protesting against suspected fraud in the re-election of President Ahmadinejad, you immediately returned home. Why?

Amir Reza Kohestani: I had the feeling that this was a historic moment not to be missed and that I couldn't just sit around idly. When I returned to Iran in July 2009, the government and the authorities had already quashed the Green Movement. The whole country was suffering under a massive depression. Everyone had lost hope, especially artists and intellectuals. I made reference to these events in my stage play "Where were you on 8 January?" and shortly thereafter encountered problems with the authorities. But only indirectly – public funds for my theatre company "More" suddenly dried up.

In 2011, you staged Chekhov's drama "Ivanov" in Tehran. Iranian critics named it "best stage play of the year". Why did you decide to stage one of the classics of European theatre?

Kohestani: The censors were watching me. It was clear that I couldn't stage any of my own works anymore. So I chose Chekhov's "Ivanov" in order to hide behind it, so to speak. The play initially comes across as a simple, harmless love story.

Chekhov's tragedy from 1887 tells the story of Ivanov, a depressive Russian landowner, who falls in love with the much younger Sasha. On the surface, it is a play about a mid-life crisis, but what it really does is satirise the apathy and stagnation of Tsarist Russia at the end of the nineteenth century. You adapted the play to mirror the current situation in Iran. Was this an attempt to describe the lethargy and hopelessness in Iran after the failure of the Green Movement?

Kohestani: Exactly. By transferring Chekhov's plot and his characters to Iran, I built a bridge between the political situation in Russia at that time and the current state of affairs in Iran. 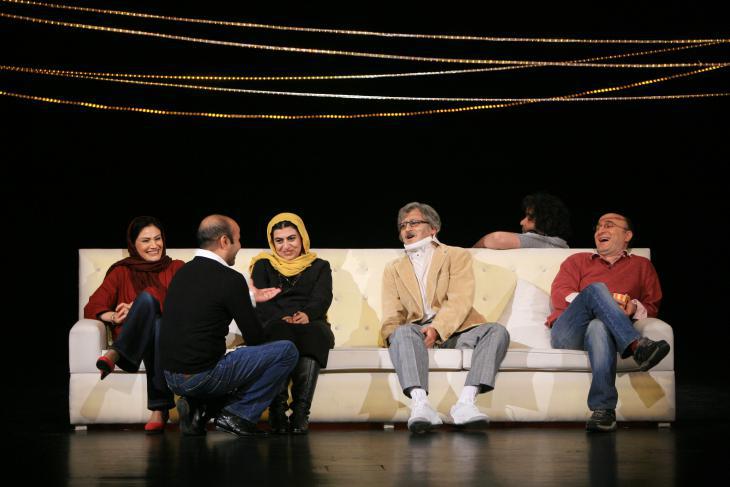 In Iran, theatre is popular, especially with young people. Says director Kohestani: "There are no discos or cinemas, so they go to the theatre! In Iran, we have a huge audience that is interested in art, including cinema, the performing arts, etc. [...] There are currently around 20 theatre companies in Tehran that can be confident of finding an audience"

The script and plot remained tightly bound to the original. Yet the actors spoke Farsi and wore Iranian clothing. Much of the dialogue between Chekhov's characters seems like a critique of Iranian politics and society. How did the Iranian censors react?

Kohestani: They came to see the play five times, and every time, they rather arbitrarily picked out a scene to criticise. For the most part, they were displeased with the tone of the play. There were endless discussions. In the end, we managed to circumvent most of the requested changes. We assumed responsibility for revising changes and justified our actions by pointing out that we were merely staging Chekhov's original script! The censors, however, are not always the baddies. Many of them are themselves former theatre professionals who support the theatre community and are attempting to remove the obstacles in its path.

In Chekhov's tragedy, the play concludes with Ivanov's suicide. You rewrote the ending. Why?

Kohestani: In Chekhov's original plot, Ivanov's suicide is a final act of self-assertion. I wasn't able to picture the "modern-day Ivanov" as brave and proud. Besides, I didn't like the role played by Sasha. Chekhov has her firmly entrenched in passivity. I couldn't see an "Iranian Sasha" in this character. I had to think of the Green Movement, in which Iranian women were at the forefront of the protests; they were the most radical of all the demonstrators. This is why Sasha is courageous and self-confident in my production; she leaves Ivanov. The Iranian public found the ending highly controversial. Should a woman simply be allowed to leave a man?

The play was a great success...

Kohestani: ... The première was delayed for two weeks because of the censors. They threatened to drop it from the programme and replace it with another play. We were only able to stage around 20 performances. But the public understood that we had problems with the system and supported us. In the last week of the production, all seats were sold out and the reviews were very good. The play was even released on DVD. I still receive reactions to it every week.

After the première, one young Iranian woman posted the comment "We are all Ivanov!" on Facebook. It seems as if young people in Iran are enthusiastic about theatre.

Kohestani: Young people don't have anywhere else to go. There are no discos or cinemas, so they go to the theatre! In Iran, we have a huge audience that is interested in art, including cinema, the performing arts, etc. This is fantastic for creative artists like myself! In Iran, art fills a void; art serves as a replacement for the lack of media and it can even influence society. There are currently around 20 theatre companies in Tehran that can be confident of finding an audience. 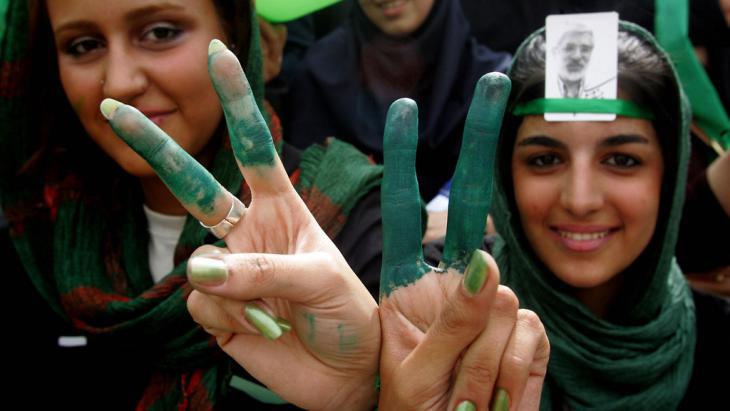 Director Kohestani changed certain aspects of the production, including making the character of Sasha less passive, and much more courageous and self-confident: "I couldn't see an "Iranian Sasha" in this character. I had to think of the Green Movement, in which Iranian women were at the forefront of the protests; they were the most radical of all the demonstrators"

Is the theatre scene primarily limited to the capital?

Kohestani: Yes, but that is changing. We are the first theatre company to establish a network that allows us to perform in other places. It began with "Ivanov", which we also performed in my native city of Shiraz. In the beginning, it wasn't at all clear whether things would work. After all, this was the first professional theatre production to take place in Shiraz in 30 years! Otherwise, the city is home only to amateur theatre groups, although they are often very good.

We staged Ivanov there without any state support, and the performances were sold out every evening. Now, other theatre companies have also begun to perform in Shiraz. There is a positive side-effect to the cuts made in the cultural sector. Due to a lack of state subsidies, we have been forced to search for our own possible performance venues. Now it appears as if Shiraz has established itself as Iran's "second city" for theatre!

Hassan Rouhani has been president of Iran for a year now. What is your impression of him?

Kohestani: Very positive! I think that he wants to introduce real change to this country. Nevertheless, I do not have high expectations, because I know my country. Change takes a long time in Iran. Sanctions have led to a very difficult economic situation and this is reflected in the lack of funding available to the arts.

Despite this, there is clearly a new sense of freedom in Iran. For example, I did not face the slightest problem with censorship for "Timeloss", my most recent theatre production! Since the Green Movement, only two or three theatre directors have been brought to court, mostly in connection with the portrayal of sexuality. Often, problems have nothing to do with the play itself, but with internal conflicts within the power apparatus.

A new wind is blowing through the universities as well. I teach at the University of Tehran. The students there are politically very active and involved. They also enjoy more freedoms. Some of the theatre students have, for example, received permission to visit prisons and set up projects with the prisoners.

Home
Print
Newsletter
More on this topic
Interview with the Egyptian theatre director Ahmed el-Attar: "Art changes thought in the long term"Interview with Iranian filmmaker Reza Dormishian: The rage of an entire generation on screenIranian cinema: Shining a light on inner conflictsThe Kurdish theatre company Teatra Si: Out of the cellars and onto the stageInterview with Thomas Ostermeier: "An Enemy of the People" in Istanbul
Related Topics
Hassan Rouhani, Iran's Green movement, Iranian theatre, Media in Iran, Performing arts
All Topics

Napoleon Bonaparte’s 1798 invasion of Egypt represented the first modern attempt to incorporate an Islamic society into the European fold. Although the expedition was a military ... END_OF_DOCUMENT_TOKEN_TO_BE_REPLACED

Five years after the Joint Comprehensive Plan of Action was concluded, it is on life support, following the US's reinstatement of sanctions and Iran's return to enrichment ... END_OF_DOCUMENT_TOKEN_TO_BE_REPLACED

The outpouring of solidarity worldwide following the violent death of George Floyd should prompt us to step back and fundamentally question racist structures and privileges based ... END_OF_DOCUMENT_TOKEN_TO_BE_REPLACED

For decades, lovers of literature would gather at the house of writer Amir Hassan Cheheltan's family to debate classical Persian works – until politics forced its way into the ... END_OF_DOCUMENT_TOKEN_TO_BE_REPLACED

The new Iraqi Prime Minister, Mustafa al-Kadhimi, has great plans. As he moves to realise those plans, he's fighting on many fronts. As the Americans pull out of Iraq, militias ... END_OF_DOCUMENT_TOKEN_TO_BE_REPLACED

Comments for this article: "In Iran, art fills a void"

there is a mistake in the text (there are no cinemas in Iran ). Cinemas do exhist in Iran aand are well attended

END_OF_DOCUMENT_TOKEN_TO_BE_REPLACED
Social media
and networks
Subscribe to our
newsletter