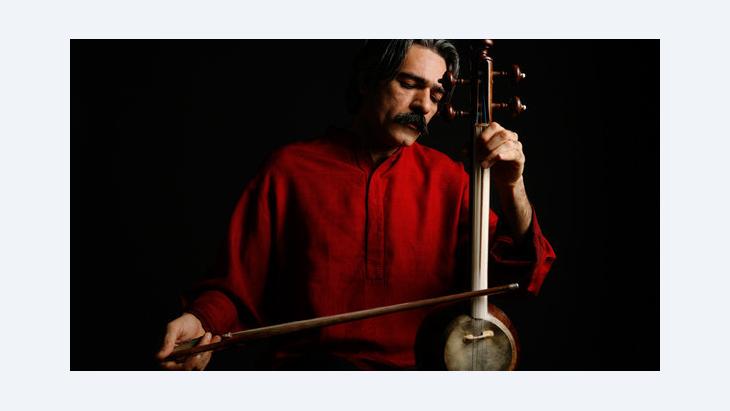 The Iranian Kayhan Kalhor is one of the great virtuosos of the kamancheh, a Persian string instrument. In an interview with Shahram Ahadi, the composer talks about the art of improvisation and how he became a young soloist in Iran

Kalhor: Yes, at the age of 12 I worked at the radio station in Kermanshah. I played in the radio and television orchestra and it was during this time that I learned a great deal from friends and virtuosos, for example Esmail Masqati, Abu-l Qasem Parandiyan and Mahmood Mer'ati, who taught me for a while, but also from Masoud Zangeneh and many others. In any case I was able to pursue my musical education there, while at the same time attending school during the day, just like all the other children. 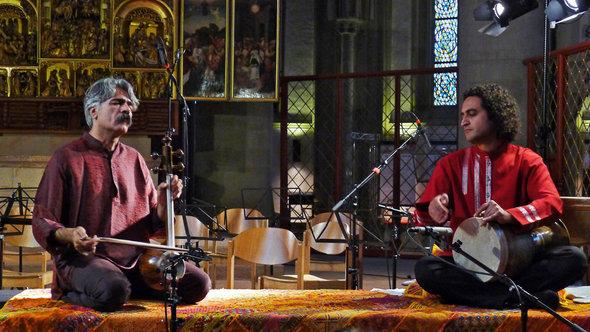 Closely bound up with traditional, classical Persian music: A master of Kurdish and Persian music and member of the "Silk Road Project" by Yo Yo Ma, the composer and virtuoso Kayhan Kalhor has held audiences around the world in thrall for many years

​​So while to describe myself as professional meant that I had my own income, at that age it wasn't professionalism in a musical sense. Things became serious for me at the age of 15 or 16, when I knew that music would be my vocational future.

What role did your family play in your musical education?

Kalhor: A very large one. There may not have been any musicians in my family, but everyone was passionate about music. In our house, you could always hear good quality, sophisticated music: the voice of the singer Banan, the voice of Dardashti and what used to be Radio Golha as well as other radio programmes. My father loved music. My mother had an excellent voice – I learned all the Kurdish songs from her. My brother was also very keen on music. He started to make instruments, and later pursued the craft as a profession. I was born into a family that not only allowed me to flourish in a musical respect, but also continually supported me and in this way smoothed the course of my professional life.

Did you start playing the kamancheh straightaway as a child?

Kalhor: No, at the age of five I played the santur for a short while. We lived in Teheran at the time and I took lessons with Ahmed Mohajer, one of the virtuoso Abolhasan Saba's best students. I was very lucky. I only came to him by chance. I have this unforgettable master to thank for my basic instruction. He was already very elderly at the time. When I went to him for lessons, he was in his early 70s. He was older than Ali Tajvidi and Faramarz Paywar, but he had attended Saba's classes with them.

When someone begins to learn an instrument, he always starts out by playing with others. When did you first contemplate the idea of becoming a soloist?

Kalhor: In my view, the basis and the quintessence of our music is solo playing. Playing in a group is a relatively new development that took root around 100 years ago. If you look at what was happening before that, there used to be a voice in combination with one instrument, a tar (long-necked lute) and kamancheh, two instruments together or a single instrument. Improvisation and solo playing are hallmarks of original Iranian music. This tradition was continued and there are to this day elderly virtuosos who are masters of improvisation. Jalil Shahnaz, who will hopefully be with us for a long time to come, and the late Hassan Kasai, are well-known for their improvisational playing.

There are unfortunately not many members of this generation of improvisational players left, and playing from sheet music in a group is gaining increasing significance. I wanted to return to the original tradition and preserve this as far as possible. I also pay great attention to this as far as my students are concerned. All those who enjoy solo playing can continue their musical development with me. If they pursue another goal we go separate ways – whether for a short time or a long time. I really hope I manage to yield a generation of soloists, even if it's only two, three, four or five people, if one day I stop playing, so that this music is not lost.

You devote part of your work to a fusion of various musical styles. There can be many reasons for joining forces with musicians from other countries: to introduce Iranian music to a non-Iranian audience, to discover new things and gather new experiences…what was your biggest motivation?

Kalhor: I think it is all of these things. Traditional music never left me with a sense of emptiness. If I was living in Iran, I would certainly only play traditional Iranian music and would feel stronger links to the genre.

But because I haven't lived in Iran for many years, it's quite normal that my horizons have been expanded – and of course those of my audience. After all, when you play a particular kind of music, you're also dealing with a particular kind of audience. The association with Indian and Turkish music, as well as classical western genres makes it possible to reach a larger public. Some things were unavoidable, and others I really wanted to do myself, so that Iranian music reaches a larger audience – although I've never pursued this goal to serve my own interests.

Has your own playing benefited from these style fusions?

Kalhor: Of course. Look, I've never worked with people who are very far removed from Iranian culture, or who do something bizarre that I don't understand. Sometimes it's possible to experience for example how four or five totally different instruments from five different cultures are combined with each other. I've abstained from that. If for example I'm working with northern Indian musicians, I've made sure that we are playing two musical styles that belong to the same family. I always say that Iranian and northern Indian music are like twin siblings who've grown up in two different families. They are very close and look very similar, but they each have a different accent and character.

The same goes for Turkish music. Improvisation enjoys the same status as it does in Iran, and the two styles have many other aspects in common, which in turn lends itself to cooperation. I have myself learned a great deal from Ardal Arzanjan and Shujaat Husain Khan and other Indian musicians with whom I've worked. I've also worked with musicians from the classical western musical tradition. After all, I live in the West and I've studied western music. This was necessary, because western musical language defines the common musical language of the world – you have to heed it and know it.

You've mentioned the instruction of young musicians who have embraced improvisation and committed themselves to tradition. It's interesting to note in this context that the Persian word "amuzesh" means both "to teach" and "to learn". What is it like for you? When you teach, are there things that you yourself discover for the first time?

Kalhor: Yes, absolutely. You know, when you teach, you return to your own beginnings. You re-live that time – and that's an important experience. Many musicians don't teach. And it's not that I'm teaching beginners, but I think the most wonderful thing about this work is that you're being perpetually transported back in time – to a period five or ten years ago, or right back to the beginning. You look back from a different perspective, with more experience, after more than 40 years of playing on your instrument. Of course you remember the mistakes you made and that you have in the meantime corrected, and this can be passed on to the students. That's why I think teaching is such a valuable and appealing activity.

Fariduddin Attar’s "The Conference of the Birds", one of the seminal works of Islamic mysticism, has recently been published in sumptuously illustrated German translation. It ... END_OF_DOCUMENT_TOKEN_TO_BE_REPLACED

In "Iran. Die Freiheit ist weiblich", journalist Golineh Atai describes the dogged resistance of courageous Iranian women against the Islamic Republic and the mullahs who have ... END_OF_DOCUMENT_TOKEN_TO_BE_REPLACED

The violent death of 22-year-old Mahsa Amini has achieved something the entire opposition has failed to do during the 43-year rule of the ayatollahs in Iran: almost the entire ... END_OF_DOCUMENT_TOKEN_TO_BE_REPLACED

Like Christianity, Europe's history is one of migration. Both have strong roots in the Orient and in cultures thousands of years old. Cultural historian Bernhard Braun invites us ... END_OF_DOCUMENT_TOKEN_TO_BE_REPLACED

A lot is happening in Syria’s Sweida Governorate – foreign intervention there is unprecedented both in terms of scale and number of actors – yet Damascus remains the dominant ... END_OF_DOCUMENT_TOKEN_TO_BE_REPLACED

Russia is leaving no stone unturned in its attempts to make the Islamic Republic an ally in the war against Ukraine. Fortunately for Vladimir Putin, the mullahs in Tehran are ... END_OF_DOCUMENT_TOKEN_TO_BE_REPLACED
Author:
Shahram Ahadi
Date:
Mail:
Send via mail

END_OF_DOCUMENT_TOKEN_TO_BE_REPLACED
Social media
and networks
Subscribe to our
newsletter