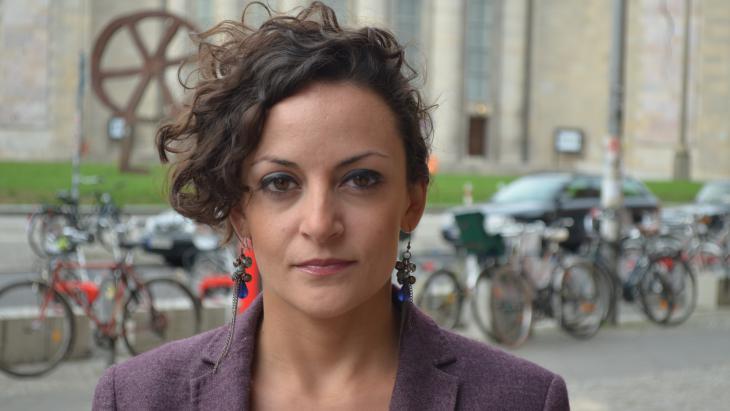 Sara Ishaq is one of Yemen's foremost young filmmakers. Her film "Karama Has No Walls" documented the 2011 massacre on Change Square in Sanaa and was nominated for an Academy Award in March 2014. Nader Alsarras met the Yemeni director and spoke to her about the situation in Yemen and the fate of the country after the revolution of 2011

How would you gauge the present situation in Yemen in view of the new war that is shaking the country?

Sara Ishaq: The situation is very difficult. The people are tired, depressed and exhausted by all this violence. The country is divided, and some of the media are trying to make the division even deeper. There is much hatred, and that is sad. The problem is that the people are no longer putting up a united front. During the revolution, people came together behind a common goal: to overthrow the government of Ali Abdullah Saleh. But they had no vision of what should come next. What makes me sad is that the young people who triggered the revolution and were united at the beginning are now fighting each other.

The problem is that the ex-dictator enjoyed immunity after he was toppled, and the Gulf Cooperation Council even supported him. Saleh was therefore still pulling the strings behind the scenes. By contrast, the Houthis and the southern separatists were marginalised during the "National Dialogue". In general, many groups of people were excluded from political participation after the revolution, and their demands fell on deaf ears. And that is exactly what led to the complex situation we are facing today in Yemen.

Saudi Arabia, which is leading the military strikes against the Houthis, regards Yemen as its backyard and has no desire to see a Shia minority rise to power there. But, as so often in wars, the civilian population is paying the price and suffering the most from the air strikes and the fighting on the ground. 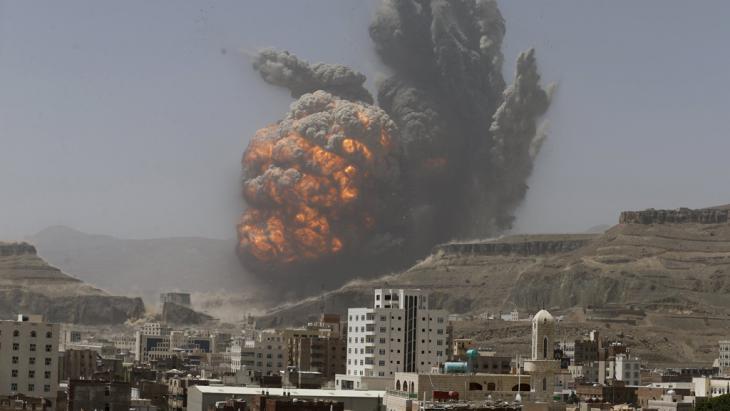 A Saudi aerial attack on Houthi positions in Yemen: "Saudi Arabia, which is leading the military strikes against the Houthis, regards Yemen as its backyard and has no desire to see a Shia minority rise to power there. But, as so often in wars, the civilian population is paying the price and suffering the most from the air strikes and the fighting on the ground," says Yemeni director Sara Ishaq

The revolution in Yemen plays a major role in your two documentaries "Karama Has No Walls" and "The Mulberry House". Looking back from today's perspective, how would you assess the outcome of the revolution?

Ishaq: The revolution was ultimately unsuccessful. We failed to thoroughly uproot the regime, because no one was prosecuted for corruption. But perhaps the revolution was successful in one respect: it brought a few Yemeni activists to prominence who were previously unknown. In general, however, the revolutionary youth were marginalised. Some of those who are striving for power and influence have even been abused for political ends.

We young people want to build a modern, democratic state based on the rule of law. But this is being prevented by various players in Yemen who are trying to seize power and gain control over the nation's resources. Yemen is like a garden that was full of weeds – with a few flowers scattered in between. The Arab Spring came, but only trimmed these weeds on the surface without pulling them up by the roots, and then planted beautiful flowers among them. These bloomed for a short while, but then the weeds grew back again and choked and killed the flowers of the revolution. The soil in this garden and its foundations are simply poisoned. Yemen needs new soil.

You left Yemen to study film directing in Britain, returning again after an absence of many years. What was it like to return home as a young filmmaker?

Ishaq: When I returned to Yemen in early 2011, no one expected a revolution to erupt there soon. I came back from the UK to do a final project for my degree – a documentary about my grandfather's life. It wasn't easy at first. People in the Middle East in general have a fear of cameras. They think they are out to spy on them and do them wrong. This is why my family initially viewed my plans with great scepticism. Shooting a film in Yemen is difficult, particularly if you want to include women. A veil is usually drawn over their identity, which should not be revealed in images. Men don't normally talk about their daughters or sisters and do not mention their names in front of strangers. They only talk in very general terms about the "family".

How did you deal with these challenges?

Ishaq: What helped me was the fact that I wasn't planning to make a film for a wide audience – which is what happened with my film "Karama Has No Walls". I just wanted to make a small final project film for my university course. I was thus able to persuade my family to take part. I told them that the world knows too little about Yemen and the Yemenis, that people don't know we're a civilised nation that is culturally and socially very heterogeneous. Instead, many perceive Yemen as a backward tribal society.

I convinced my family that we need to do something to change this stereotype, by conveying a different image of Yemen through films. They then finally agreed and also allowed me to shoot on Change Square in Sanaa when the revolution broke out. I worked with numerous activists during the shoot. The footage was unplanned and more or less intuitive, because I didn't know at the time that I would later use the interviews for my documentary "Karama Has No Walls". The film is about the massacres in Sanaa on the "Friday of Dignity". It certainly never entered my head that the film would later be nominated for an Oscar.

What can cinema and art set in motion in Yemen?

Ishaq: Films, in particular documentaries, can enlighten people. Many Yemenis are rather gullible and kind-hearted. That's the problem. A large number of people there are poor and uneducated, making them easy prey for others out to abuse their kindness and convince them of false notions. Nowadays, this can be done very easily and quickly using smartphones and social networks. This was the case, for example, when rumours began to circulate about Change Square, one of the central locations of Yemen's youth revolution. People believed the myth that women were being raped and men killed in the square, and that it was taken over by gangs of thugs. Furthermore, many Yemenis have religious, social and tribal prejudices. Such bias is of course present in any society, but Yemenis in particular need to be enlightened. While I was in Yemen during the revolution, I tried to enlighten people about what was actually going on there. 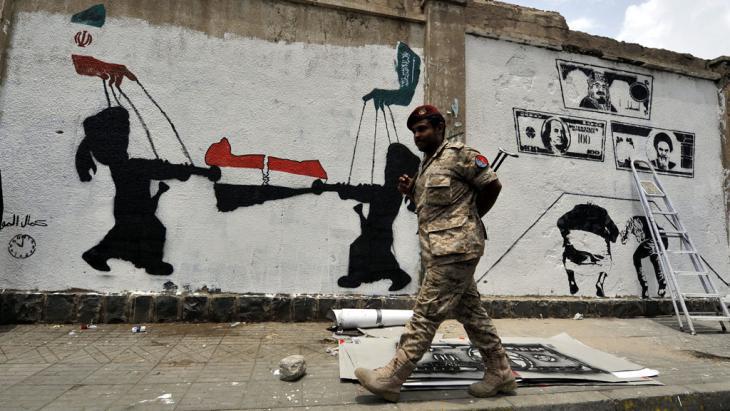 Yemen is now being put to the test: many feel that the Arab country is increasingly becoming a pawn in a proxy war between Iran and Saudi Arabia. Saudi Arabia accuses Iran of supporting the Houthi rebels with weapons and fighters, which the leadership in Tehran denies

But can art really change anything under such circumstances and in today's situation?

Ishaq: Yes, most definitely. Before the revolution, there was no real art, no film industry in Yemen; there were no blogs or video blogs, no street art such as singing or music. There was also no public space for such activities, where people could meet and interact, or where their talents could be fostered. The revolution gave young people the opportunity to discover these things, and also to network. They began to meet in coffee shops to make music, to write blogs and to talk with their peers about the events of the revolution. This strengthened the spirit of cohesion amongst them. Before, there were no youth or cultural centres where young people could come together. The few coffee shops in Sanaa thus became meeting places for the revolutionary youth.

In your second film, "The Mulberry House", which you made in Yemen, you concentrate on the history of your family.

Ishaq: In this film, I wanted to focus on my family's life in Sanaa. The film is a kind of rediscovery of my Yemeni roots. I went abroad to study. During my time abroad, I lost my inner connection with my family and the Yemeni culture. I didn't travel to Yemen for five years. When I came back, I started to film my family and it was then that I understood how much the family dynamics had changed. For me, the change in my family was like a revolution. It also reflected the transformation of society – a transformation that ultimately led to the revolution. Most people had changed and wanted things around them to change. That is why I think a film like "The Mulberry House" helps people to understand the situation in Yemen and to see the Yemenis as ordinary human beings, who are now being bombarded and exposed to violence.

At the end of every year, the team at Qantara.de gives you a run-down of the ten most-read articles on the site over the past 12 months. Here is a quick overview of the stories ... END_OF_DOCUMENT_TOKEN_TO_BE_REPLACED

Since Russia invaded Ukraine, Europe has been trying to find alternatives to Russian gas, inevitably zeroing in on the Arab Gulf states. In his commentary, Yemeni politician ... END_OF_DOCUMENT_TOKEN_TO_BE_REPLACED

Thanks to climate change, the Middle East is heating up faster than any other part of the world, putting the region's ancient pyramids, castles, holy and other heritage sites at ... END_OF_DOCUMENT_TOKEN_TO_BE_REPLACED

After a two-year hiatus, the Arab League re-convened at the beginning of November in Algiers against a backdrop of uncertainty and discord. By Pierre Boussel END_OF_DOCUMENT_TOKEN_TO_BE_REPLACED

Germany needs a strategy when brokering deals with countries like Qatar, Saudi Arabia or the United Arab Emirates that allows it to maintain its own moral compass. By Sebastian ... END_OF_DOCUMENT_TOKEN_TO_BE_REPLACED

END_OF_DOCUMENT_TOKEN_TO_BE_REPLACED
Social media
and networks
Subscribe to our
newsletter