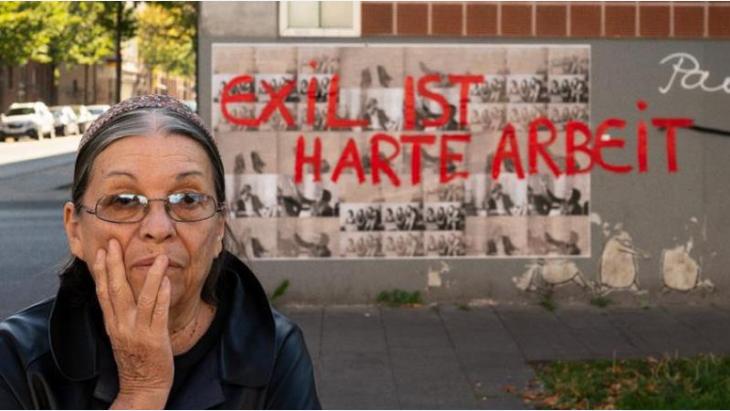 "Exile Is a Hard Job" is a spot-on title for the retrospective of Turkish artist Nil Yalter's oeuvre at Museum Ludwig in Cologne. For over 40 years, she has been exploring the situation of migrant workers. By Sabine Oelze

You were the first female artist in France in the early 1970's to take a video camera in your hand; the first feminist to document the repression in women's prisons; and you were the first activist to focus in your art on the living situation of migrant workers. Why is your name known only to insiders?

Nil Yalter: Yes, that's right. For the first time, I have a big retrospective in such a wonderful and significant museum. And I am now 81 years old.

In the 1970s you joined the Femmes/Art ("Women/Art") and Femmes en lutte ("Fighting Women") in Paris, two associations of female artists who insisted on the recognition of women in a sexist art world. How at this time did you become the first artist in France to utilise the emerging video medium?

Yalter: At that time I discovered the Portapak, the first portable video machine. In 1973 I had an important exhibition at the Museum of Modern Art where I exhibited a replica of a nomad yurt. Someone brought me this Portapak and I began filming and taping. I was immediately fascinated by the possibilities. I did the first shots around the yurt and filmed children who came in and out of the tent, even babies. So I made a documentary video. And so that's how I started.

In your first video performance, you film your hand writing text on your stomach: it's a work dealing with the hatred of the clitoris in male Muslim culture.

Yalter: The excerpt is from a publication by the historian Rene Nelli. It is a very political text. He talks about how women are physically and morally castrated from their pleasure and their sexuality. It is a very important text. I wouldn't call it a performance; I performed for a video art piece.

From the mid-70s your work enters a new phase and you start interviewing migrant workers in France.

Yalter: Not only in France, but in Belgium, the USA and Germany as well. But, yes, also in the Parisian banlieues.

That sounds more like a sociological approach. Have you always wanted to make art out of this material?

Yalter: Yes, always. I always wanted to make art. The initial spark was an encounter with nomads in Anatolia who live in those roundhouse tents. They told me that every woman has a husband or a brother or a son or an uncle who went to the city and settled in the favelas or in the slums. And some of them went straight to Germany.

I got interested in the economic refugees, wondering what became of them. Why did they come to Germany or France? I worked a lot with the social workers, Turkish social workers who live in France and helped the immigrants. In Germany it was better organised. The immigrants learnt German language while working in the factories, but in France it was not like that. So they ended up with little mastery of the language. Even those who attempted to acquire some French through their contact with the social workers.

What did you learn about the female immigrants' situation?

Yalter: For them, it's like being doubly imprisoned. The men go out to cafes and meet up with each other; or they are working so at least they're getting some notion of the language. But the women are cooped up in social housing – huge buildings like cages. The children go to school, so they speak better French than Turkish. As a result, the women rely on their children to take them out and translate when they go shopping once a week. Otherwise their lives are spent sitting at home and staring at the walls.

Nil Yalter films, draws and describes the fate of people who, like her, have left their home countries and have to search for a place in a foreign land. Today her work is especially poignant. By Sabine Oelze 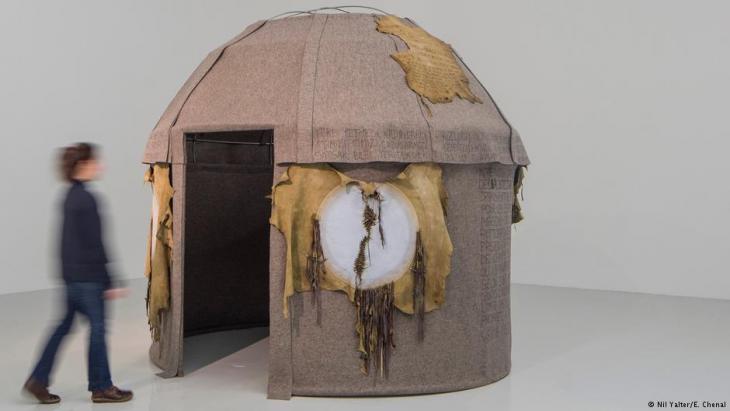 Invisible in prison: in the early 1970s, Nil Yalter lived with nomads in Anatolia. She learned about the fate of women there. Their lives as young girls involve erecting and decorating the tent. They decide when the man can go inside. But the price is high. They are not allowed to leave the yurt. With their men and their animals they move across the steppe, invisible to outside eyes 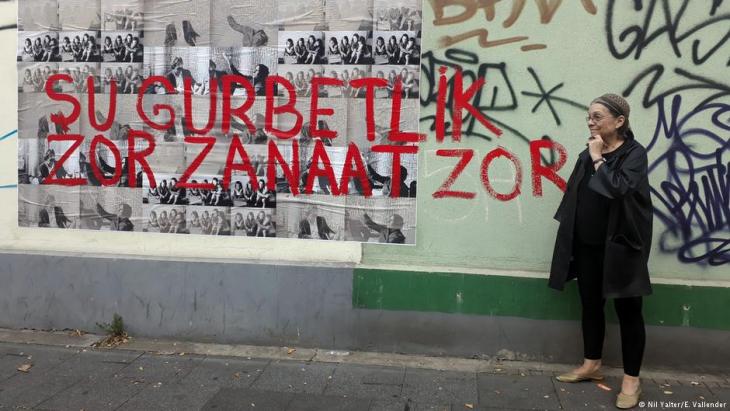 Being in public: Nil Yalter's poster campaign aims to sensitise the public to the situation of people in exile. She hangs her large red-lettered posters around the world. In Vienna, she was attacked for it, in Mumbai, however, the posters were left hanging unscathed for weeks. In Cologne, too, she hangs up her posters. It says in Turkish: exile is hard work 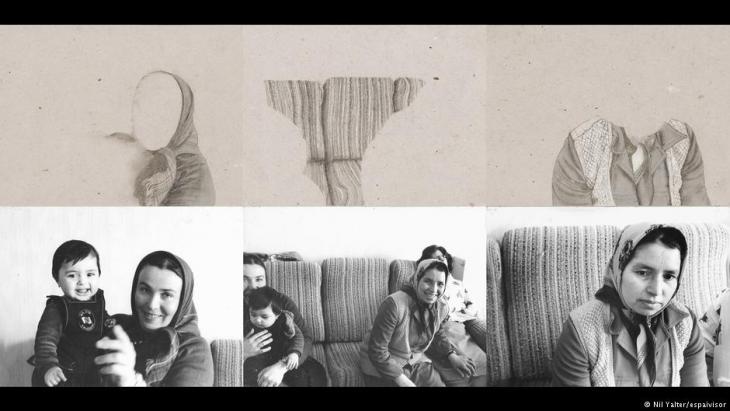 Turkish immigrant women: in 1977, photos were taken of Turkish women living in exile. They are representative of many other women in the same isolated situation: they've lost country and language. Nil Yalter draws her silhouettes, but without the face. Thus, the individual is made unrecognisable – to emphasise the universal fate of migrants 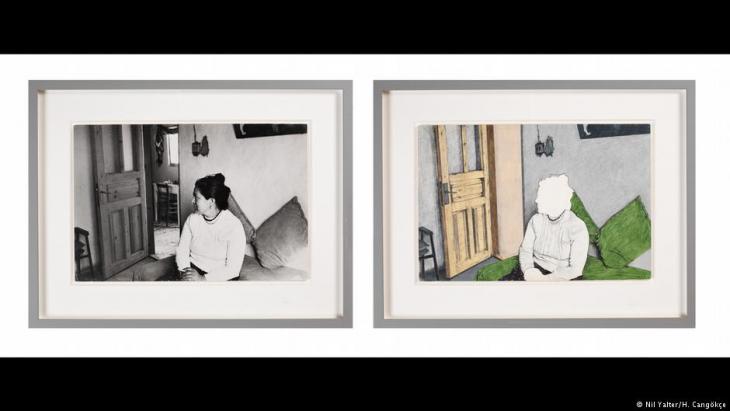 Kurdish women from Turkey: "Rahime" is a multimedia installation that uses video, photographs and drawings to highlight the lives of Kurdish women in Turkey. Again she erases the individual in her drawings. In the video interviews, the women tell how difficult it is for them to lead an independent life, without the possibility to learn the language 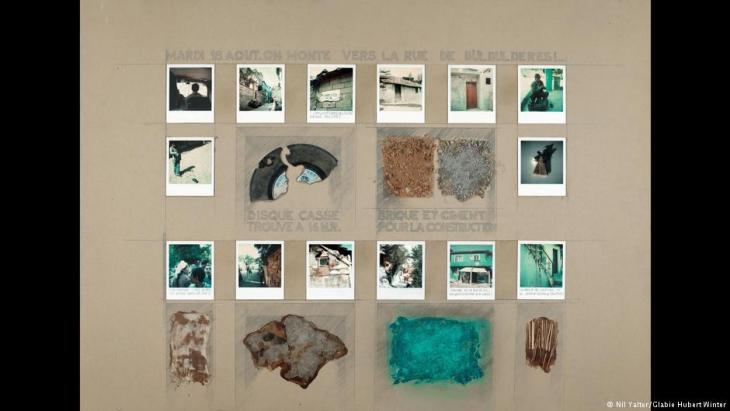 Temporary accommodation: Nil Yalter has often walked through neighbourhoods where guest workers first settled in the 1970s. In photos and with the help of found objects she captures the lives of these people. The Polaroids show the often rundown dwellings, in the slums or suburbs of the big cities

We are currently going through radical political changes in Europe and the world. But in contrast with the enthusiasm of the revolutionary movements of 1968, we are seeing a new aggressive form of de-democratisation. How do you view these changes?

Yalter: I find the atmosphere very threatening. Last year my exhibition was being shown in the centre of Vienna and someone complained about the poster, with its photos of migrants and the title – "Exile is a hard job". He didn't want to see photos of immigrants and he started shouting at the gallery owner.

You have been living in Paris for a long time. How do you interpret the yellow vest protests?

Yalter: It's an interesting movement. It doesn't have a head, there is no structure – it started out very spontaneously. Some, maybe half of them, are very sincere. However, the other half is very right-wing, so all it is doing is helping Le Pen's party. I must say I'm worried. Italy's prime minister is very interested in the yellow vests — and very friendly with Marine Le Pen [the Front National]. All this is of great concern to me. I no longer feel at ease in Paris. I love Paris. I've been there for such a long time. But I feel menaced. How am I going to go on living in the city when Marine Le Pen says that to be French, you have to have lived in France for five generations? It reminds one of certain things.

Home
Print
Newsletter
More on this topic
Egyptian photographer Heba Khalifa in interview: "A space for confronting our fears"Suspended Territories exhibition: Beyond the veilPortrait of the Israeli performance artist Adi Liraz: Provocation as a search for identity
Related Topics
Art, Islamophobia, Migration, Muslim women, Policy on refugees and migration, Right-wing populism, Sexism and violence against women, Visual arts
All Topics

In his controversial book published in 2020, French author Pascal Bruckner describes anti-Muslim sentiment as a fiction, claiming that the term "Islamophobia" is being used to ... END_OF_DOCUMENT_TOKEN_TO_BE_REPLACED

Several media reports in recent weeks have focused on the potential threat presented by Islamist groups in Germany. The discourse is fraught with generalisations, both sides ... END_OF_DOCUMENT_TOKEN_TO_BE_REPLACED

Critics of France's draft law to combat "radical Islamism" say the proposed measures are inefficient and will further stigmatise Muslims. They assert that involving Muslims in the ... END_OF_DOCUMENT_TOKEN_TO_BE_REPLACED

Sanctions against Ankara are being considered at the EU summit. The number of those in favour has risen. It remains unclear how Germany will behave. But would such measures have ... END_OF_DOCUMENT_TOKEN_TO_BE_REPLACED

Prominent Islamic scholar Muhammed Abu Zaid has urged Muslims in France to cooperate with the government. At the same time, he emphasised the need for the French authorities to ... END_OF_DOCUMENT_TOKEN_TO_BE_REPLACED
Author:
Sabine Oelze
Date:
Mail:
Send via mail

END_OF_DOCUMENT_TOKEN_TO_BE_REPLACED
Social media
and networks
Subscribe to our
newsletter