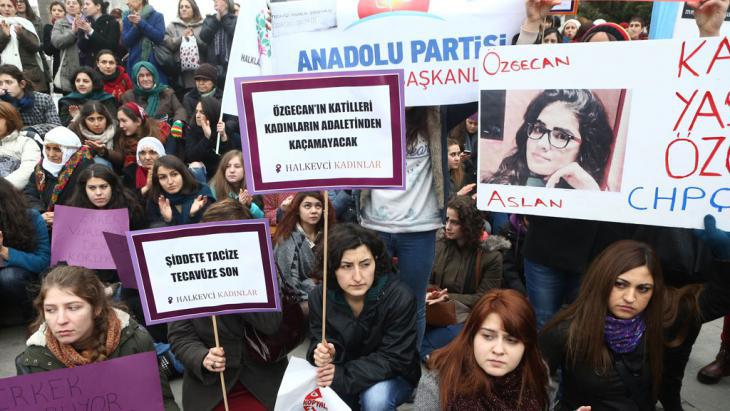 A history of resistance

The attempted rape and subsequent murder of the student Ozgecan Aslan alerted the world to violence against women in Turkey. Ceyda Nurtsch spoke with Selime Buyukgoze from the women's rights organisation Mor Cati about women's struggle for self-determination

The murder of the 20-year-old student Ozgecan Aslan last February shocked many people in Turkey and elsewhere, drawing renewed attention to violent crimes against women. What was the outcome of the debate?

Selime Buyukgoze: The media portrayed the murder of Ozgecan Aslan as an isolated incident. Public reactions also focused on the crime as an exceptional case rather than recognising the extent of the underlying problem. Violent abuse of women by men is systematic, and Ozgecan Aslan was not the only woman to be affected. People condemned the murder in particular because it involved a young woman and because it happened in broad daylight. If the situation had been different, it would not have provoked the same reactions. It would have been different, for example, if a woman in a miniskirt had suffered violence at night from a man she knows: her husband, boyfriend, brother or father.

That is one aspect. Another is that these men are often portrayed as almost mentally ill. In this way, the act of violence is to a certain extent marginalised. But in fact it is just one type of the male violence we experience every day. The perpetrators are normal men we meet on the street. They are our fathers, brothers, boyfriends.

Another point that repeatedly came up in the discussion, and which we disagree with, is the death penalty. For us, the death penalty is not a form of prevention, but at most a threat to the criminals. What we expect from society and the government instead is that they take steps to abolish the inequality between men and women and to protect women against violent acts. 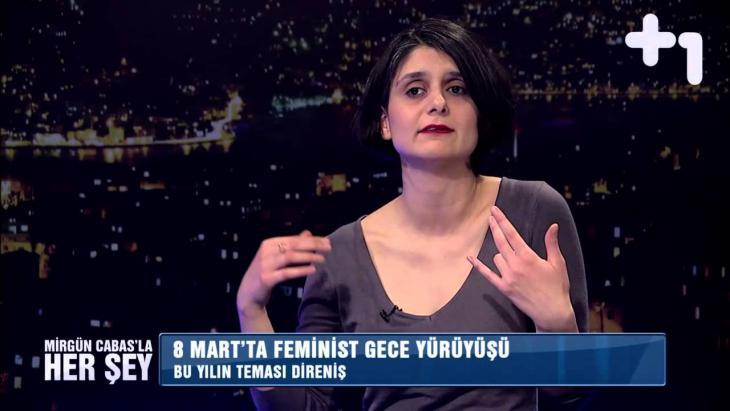 "But we can also clearly say that the AKP government makes no secret of its hostility to women. Almost every month, a member of government comes forward with statements directed against women: for example, about how a woman is supposed to behave and to live, that she should have at least three children, not laugh out loud on the street, and should not be permitted to have an abortion. Policy-makers try to stop abortion by making it as difficult as possible," says Selime Buyukgoze (pictured here)

What problems do women bring to your attention most often?

Buyukgoze: Our work focuses on domestic violence. Most of the over 500 women who have turned to us for help over the last six months experienced psychological abuse, followed by physical violence. The line between them is often fluid.

A woman who has experienced physical violence was probably also put under psychological pressure beforehand. The aspect of psychological violence is especially important because people often think of violence primarily in terms of a black eye, violence that leaves a trace that one can see.

Another very important detail is that 66 per cent of violent acts against women are committed by their husbands, partners, fathers or ex-husbands. There are different categories of violence. It ranges from a slap in the face, to kicking, to a woman being prevented from seeing her own family or from working. And within these categories, there are also different forms of violence.

Sometimes a woman is deliberately hit in a way that leaves no visible trace. This shows us that men's violence is often premeditated and does not just happen in a fit of rage. Women contact us by e-mail or telephone, and our social counsellors talk to them, giving them moral support and informing them of their rights, after which they draw up a plan together. We have also established a women's shelter for 19 women.

What do you see as the cause of such widespread violence against women?

Buyukgoze: The main cause is male hegemony. This is the case not only in Turkey but also in Europe and the USA, as shown by UN reports. Every country also has its own unique dynamic that encourages the phenomenon, such as religion, for example, or political power.

In the case of Turkey, there was already violence against women 10 or 15 years ago. But we can also clearly say that the AKP government makes no secret of its hostility to women. Almost every month, a member of government comes forward with statements directed against women: for example, about how a woman is supposed to behave and to live, that she should have at least three children, not laugh out loud on the street, and should not be permitted to have an abortion. Policy-makers try to stop abortion by making it as difficult as possible.

People try to ascribe certain roles to women and men, as if they were part of the natural order of things. From this attitude comes the idea that women's role in society is to take care of the home and to have children. It is then virtually impossible to break out of this stereotype. The reasoning is that this is simply your nature and if you don't behave accordingly, then it is only legitimate that violence is used against you.

Another example is Law No. 6284 against violence. The name of the law is in itself problematic because it is the "Law for the protection of the family". For the AKP, women are only of significance within the family. The "Ministry for Women" was also renamed "Ministry for Family Affairs".

We think that violence against women can only be prevented if we fight against male hegemony, against inequality. But the AKP always emphasises the family and does not view inequality as a problem. For Recep Tayyip Erdogan, it is also a matter of course to repeatedly stress that in his opinion, men and women are not equal. This has resulted in laws being formulated in a way that is detrimental to women. While women are not completely withdrawn from the working world, they are encouraged to be more flexible on the labour market, so that they can still do all the work at home. This includes not only having children but also taking care of the disabled and the elderly. In other words, taking on tasks that are actually the responsibility of the state. 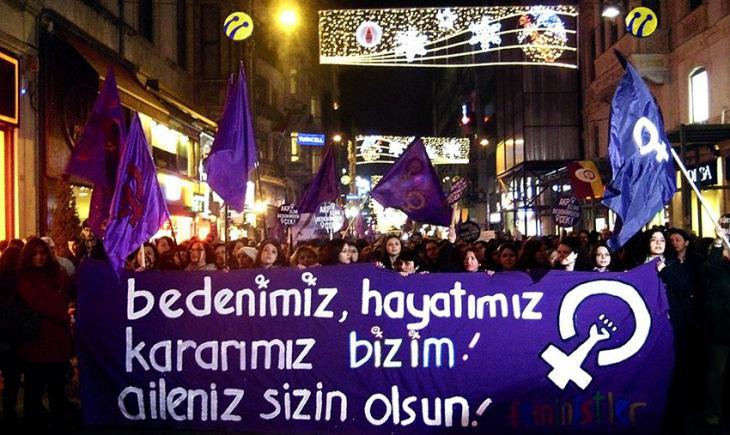 Resistance to sexism, oppression and male violence: the attempted rape and the brutal murder of the Turkish student Ozgecan Aslan triggered protests across Turkey. Crowds gathered in mid-February in Ankara, Istanbul, Izmir and elsewhere to protest against violence against women. On 13 February 2015, the Turkish police found the body of 20-year-old Ozgecan Aslan in a riverbed in the southern Turkish province of Mersin

Since the young student's murder in particular, many women, as well as men, have taken to the streets to protest against violence against women. Is a new social awareness emerging; can we speak here of a new social movement?

Buyukgoze: The fact that men are taking to the streets is something I personally find hypocritical, because, as I said, the problem is a global one. If I get bullied at work, for example, if someone disrespectfully interrupts me when I'm speaking because I'm a woman, if I get slapped, or if my father doesn't allow me to go out at night – in short, if others tell me what I can and can't do, then it's because we live in a society where there is solidarity among men on these points. Portraying the situation as if men did not benefit in daily life from this imbalance is something I personally consider to be extremely problematic.

Men should above all question their masculinity. Of course, they can go out and protest, but it would be much better if they were to stay at home and take care of the children so their wives are free to go out onto the streets and stand up for their rights.

Turkey has had a very strong feminist movement since 1987. The campaign "Scream so everyone can hear you" is only one of many with which women have managed to be heard. Recently, women who do not belong to any organisation have been sharing their experiences of male violence via social media through the #Sendeanlat (Tell your story) movement. Women who live in this environment of male violence obviously have a major battle to wage. It is not just a story of oppression but also of resistance.

The USA and NATO plan to withdraw from Afghanistan by September. The operation is risky, the outcome uncertain. Many Afghans fear civil war. The quake on the Hindu Kush will also ... END_OF_DOCUMENT_TOKEN_TO_BE_REPLACED

The neo-Ottomanism propagated by Erdogan has long been more than rhetoric and symbolic politics. This can be seen from recent developments in parts of northern Syria, where Turkey ... END_OF_DOCUMENT_TOKEN_TO_BE_REPLACED

Televised Turkish dramas are all the rage in the Middle East. A young Ottoman TV Empire has been expanding its soft power by harnessing regional dialects, Arabic names and viewers ... END_OF_DOCUMENT_TOKEN_TO_BE_REPLACED

Researchers agree that climate change alone cannot be blamed for the outbreak of war in Syria in 2011. However, neither can it be ignored as a reason this once blossoming country ... END_OF_DOCUMENT_TOKEN_TO_BE_REPLACED

The Sufi Trail is a long-distance hiking route from Istanbul to Konya that seeks to revive the ancient tracks used by foot pilgrims on their way to Mecca. Marian Brehmer spoke to ... END_OF_DOCUMENT_TOKEN_TO_BE_REPLACED
Author:
Ceyda Nurtsch
Date:
Mail:
Send via mail

END_OF_DOCUMENT_TOKEN_TO_BE_REPLACED
Social media
and networks
Subscribe to our
newsletter