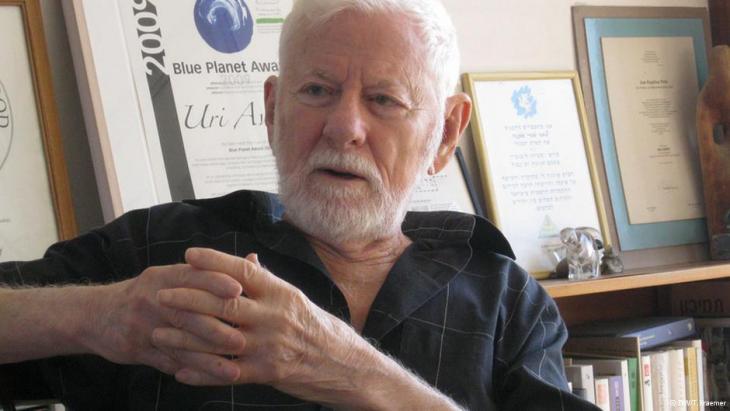 "Pessimism Means Nothing to Me"

Israeli peace activist Uri Avnery is celebrating his 90th birthday. In this interview with Tania Krämer, he offers his perspective on the recent Middle East peace talks and the many questions arising from the Syrian conflict

Mr. Avnery, you are celebrating your 90th birthday. How do you feel?

Uri Avnery: I don't at all feel like I'm 90! It feels like I'm just putting on a show for people. I would say I feel like I'm 45, 50 at the most, these days. A few people view me today as a 90-year-old. Even my enemies have also developed a kind of tolerance toward me. A 90-year-old, you've got to have a bit of tolerance there…

Palestinians and Israelis re-entered negotiations a few weeks ago. As a political gesture, Israel released 26 Palestinian prisoners. How do you view the prospects for these negotiations?

Uri Avnery: The discussion about releasing prisoners a few weeks ago showed how far we are from peace. As long as the terminology of the war remains, it won't work. You can't talk about peace as though you were still in the middle of a war. It was generals back then who drew the maps that we see today. The difference between the Oslo Accord (Ed. Note: A 1993 framework, signed by Israel's then-Prime Minister Yitzhak Rabin and the former PLO head Yasser Arafat, with the long-term goal of ending the conflict between Israel and Palestine) and today is that Oslo was done behind the Americans' backs.

It's always good when Israelis and Palestinians sit down across from each other and negotiate together. When a third party is there, an American, or the UN, or whoever else, then nothing good comes of it – because every third party has its own interests and keeps them in consideration. Unfortunately, there's now no alternative. If the Americans aren't involved, then nothing at all happens. 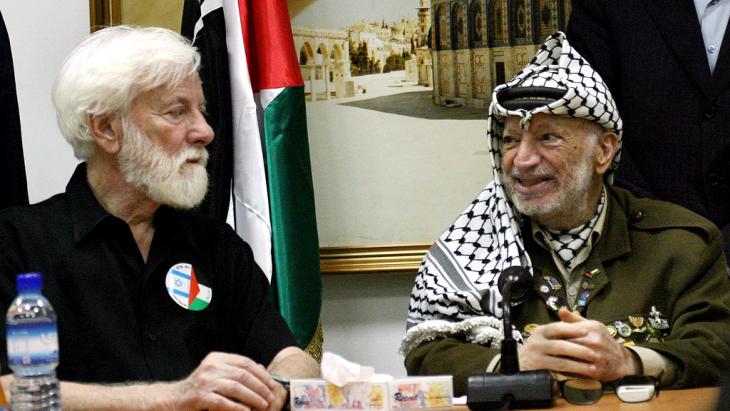 "Pessimism means nothing to me. I am never pessimistic. I only look to see whether the situation is getting better or worse." Uri Avnery became well-known for being the first Israeli to meet with the Palestinian PLO head Yasser Arafat in Beirut during the 1982 Lebanon War

Nevertheless, it seems that a Palestinian state is a very distant thing. In recent years, both peoples have drifted even further apart. Isn't there plenty of reason to be pessimistic?

Uri Avnery: Pessimism means nothing to me. I am never pessimistic. I only look to see whether the situation is getting better or worse. People keep fighting when it gets better or when the situation gets worse. When the conditions grow worse, the contact between the Israeli and Palestinian sides diminishes, including among those in the peace movement.

Here in Israel, people like to comfort themselves by saying: Peace isn't possible because 'the Arabs' don't want it. That's very comfortable because then you don't have to think about or discuss things. And no one talks about peace anymore. The word peace has vanished from the lexicon.

It doesn't look like the region more generally is headed for peace. The US may pursue military strikes in Syria.

Uri Avnery: US President Barack Obama held a speech about red lines that tied his own hands. And now he's sitting in the corner and can't get out of the bind he got himself into. Bashar al-Assad is a disgusting man, and it's a disgusting regime. I'd like to see it go. But you have to ask yourself what happens once it's gone. Will something better come, or something worse – along the lines of al Qaeda? It could result in an endless civil war, or to the breakup of Syria. And who has an interest in that?

Israel certainly doesn't have an interest in Assad being toppled. There hasn't been a single shot fired at the Israeli-Syrian border since the Yom Kippur War in 1973. It's Israel's most peaceful border in decades. If Assad goes, we'll have an Islamist regime in Syria. I'm almost sure of that, since the secular powers are all abroad. And because the US won't conquer Syria, what's going to come out of it?

Israeli officials stress that the chances are small that Israel would be attacked. How do you view this development?

Uri Avnery: War is war. If you start one, you never know how it will turn out. Imagine it this way. The Americans throw their bombs, and Assad decides it's a wonderful opportunity to say: 'I'll go after Israel and show the entire world I'm the only one who's fighting against Israel. If you're against me then you're protecting Israel. That will change the whole image of the war.' That could happen. Everyone will react. The US, Russia and Iran. And what a mess that would be.

That's how it was with World War I. I've thought about that often in recent days. We don't have enough gas masks. And that's why all of the media spokespeople are saying the chances are low that Assad will attack Israel. How do they know that? What kind of concept do we have at all of what Assad is thinking? Israelis have never been able to imagine themselves in others' situations. And that wasn't any different during the Yom Kippur War. So there was much surprise when the attack didn't fit with the Israeli concept.

Uri Avnery was born in Germany. His family fled in 1933 from the Nazi regime to Palestine. As a 15-year-old there, he initially joined the radical underground group Irgun to fight against the British administered Mandatory Palestine entity. In 1948, he was severely injured during Israel's War of Independence. The journalist and peace activist served for decades as the publisher of the news magazine HaOlam HaZeh and served as a member of the Knesset for three legislative periods.

He became well-known for being the first Israeli to meet with the Palestinian PLO head Yasser Arafat in Beirut during the 1982 Lebanon War. His decades-long efforts at reconciliation have earned the founder of the Gush Shalom peace movement a plethora of international awards and honors, including the Alternative Nobel Prize. He turned 90 on September 10.

Arab women played a leading role in the protest movement of 2011. Since then, ongoing social transformation has had a considerable impact on their lives. What is their assessment ... END_OF_DOCUMENT_TOKEN_TO_BE_REPLACED

Turkey's parliamentary and presidential elections are scheduled for June 2023. But they are already casting a shadow. While the opposition is calling for early elections, ... END_OF_DOCUMENT_TOKEN_TO_BE_REPLACED

Jewish voices are much more diverse than the public often sees. Jewish men and women who oppose the injustice of Israeli occupation in the West Bank deserve our respect and ... END_OF_DOCUMENT_TOKEN_TO_BE_REPLACED

By stage-managing his re-election in a poll widely dismissed as a farce, Syria's President Bashar al-Assad has killed two birds with one stone: he has forced his compatriots to ... END_OF_DOCUMENT_TOKEN_TO_BE_REPLACED

The Germans have a fragmented perception of the conflict between Israel and the Palestinians, and their discourse is dominated by certain catchphrases. All the while, there is a ... END_OF_DOCUMENT_TOKEN_TO_BE_REPLACED

An unusual organisation brings Jews and Muslims together to fight hate and promote dialogue. In the small central German city of Marburg they have been jointly calling for an end ... END_OF_DOCUMENT_TOKEN_TO_BE_REPLACED
Author:
Tania Krämer
Date:
Mail:
Send via mail

END_OF_DOCUMENT_TOKEN_TO_BE_REPLACED
Social media
and networks
Subscribe to our
newsletter