According to Yasser Hareb, vice president of the Al Maktoum Foundation, cultural exchange plays a key role in the fostering of international understanding and the institutionalisation of a fruitful cultural dialogue between the West and the Arab world. Loay Mudhoon spoke to him about the importance of culture in international relations

"Our objective is to familiarize the West with Arab culture and Arab thought," says Yasser Hareb

​​ At this year's Frankfurt Book Fair, the Mohammed bin Rashid Al Maktoum Foundation announced that it will be commissioning the translation of 50 Arabic classics into German. What does the foundation hope to achieve with this ambitious translation project?

Yasser Hareb: This new initiative is an integral part of a series of translation projects that our foundation is managing and funding. Our objective is to familiarise the West with Arab culture and Arab thought. We are focussing in particular on the German-speaking world because to date hardly any Arabic books have been translated into German. We would like to show the Germans and the Europeans the richness and variety of Arab culture.

What has been the reaction of your German partners to your activities in the field of cultural exchange?

Hareb: We began co-operating with our partners in Germany in April of last year and we were impressed with how professionally our German colleagues and partners deal with cultural initiatives; we are particularly impressed by German culture management.

On 13 March 2008, our foundation signed an agreement with the Berlin-based German-Arabic cultural association "West-Östlicher Diwan" (West-Eastern Divan), which was founded by the well-known Iraqi poet Amal al-Jubouri and is also managed by her. Together with the West-Eastern Divan, we would like to help promote co-operation between Germany and the Arab world in the field of culture and knowledge development.

Were you able to present any specific fruits of this co-operation at the Frankfurt Book Fair?

Hareb: This year's Frankfurt Book Fair offered us a fantastic opportunity to present recently published Arabic translations of German works. We were also able to present the first fruits of our co-operation with the West-Eastern Divan, for example the translation of Martin Walser's novel Ein liebender Mann (A loving man) and the book Alexandria Fata Morgana published by Joachim Sartorius. 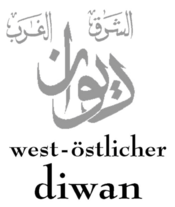 The objective of the West-Eastern Divan Association in Berlin is to promote dialogue between Germany and the Arab world, most particularly at cultural level

​​ Can culture correct the mistakes of politics? What significance do you attach to culture?

Hareb: I am convinced that cultural exchange can clear up a lot of misunderstandings and can even correct political errors in the long run. Culture is the expression of what people have achieved during their lives, the aesthetics of their lives; it brings people together by highlighting common ground and helps to dissolve hardened prejudices and to expose distorted images. Culture can heal political wounds.

Could you give us an example, especially regarding the relationship between Europe and the Arab world?

Hareb: Cultural exchange can become the motor of international understanding and the institutionalisation of a fruitful cultural dialogue between the West and the Arab world because it can overcome barriers. Moreover, the Mohammed bin Rashid Al Maktoum Foundation is convinced that this fruitful exchange can help advance knowledge and human resources in the Arab world.

In your opinion, what should a fruitful cultural dialogue achieve?

Hareb: In my opinion, in order to make a fruitful dialogue possible in the first place, the most important thing is to win over people for the things that bind them, for the humane. After all, a successful dialogue should lead to a greater understanding of the other party. The Mohammed bin Rashid Al Maktoum Foundation will focus more in the future on this task with the help of numerous cultural programmes.

The Mohammed bin Rashid Al Maktoum Foundation was founded with US$ 10 billion start-up capital on the personal initiative of His Highness Sheikh Mohammed bin Rashid Al Maktoum. Sheikh Mohammed is the vice-president and prime minister of the United Arab Emirates and the ruler of Dubai. The objective of the foundation is to enhance the knowledge and human resources of the Arab world and to train a generation of future regional managers. It hopes to reach these objectives by implementing a package of unique projects. The main focus of the initiative is on three strategic areas: knowledge, culture, and corporate activities. The wide variety of programmes supported by the foundation includes the provision of funding for research institutes, programmes that support young managers, and scholarships for study and research.

Dialogue with the Arab World
German-Arab Divan
The magazine "Divan" started life in the Yemeni capital of Sanaa. A German-Arabic poets meeting was held there in autumn 2000, initiated by the Iraqi poet Amal Al-Jubouri who is also the current publisher of the magazine.

END_OF_DOCUMENT_TOKEN_TO_BE_REPLACED
Social media
and networks
Subscribe to our
newsletter