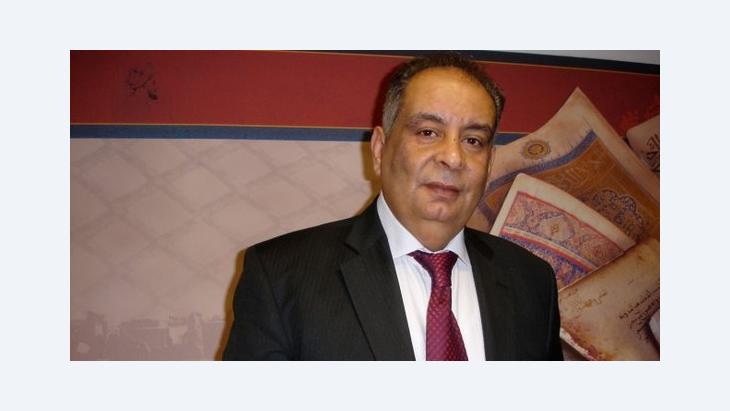 ﻿Youssef Ziedan is a bestselling Egyptian author, philosopher and scholar of history. He is also director of the Manuscript Division of the Bibliotheca Alexandrina, the New Library of Alexandria. In this interview with Susanne Schanda, he says that being revolutionary is also about asking questions of authority

Here we are in your office in the Bibliotheca Alexandrina, close to the site where the famous ancient Library of Alexandria once stood. What does it mean to you to work in such a historical place?

Youssef Ziedan: Discussions on the construction of a new library on the site of its ancient predecessor were getting underway at the time I was writing my dissertation here in Alexandria. I could see the site of the new building from the roof of the university. The importance of this library goes far beyond its collections of books. It is an intellectual centre, a centre of philosophy and scholarship. During the early stages of the building work, I was already working as an advisor on cultural heritage and manuscripts for the new library and, at the same time, I was realising a dream. Because this is not just a job, not just a building or a library, this is about the dream of reviving the free cosmopolitan spirit of Alexandria.

Ziedan: When I was a child, there were lots of Greeks and Italians here. They spoke Arabic and were part of the community. Some of my friends later married Greek or Italian women. That was no problem at all.

Then the revolution of 1952 came along. It was a disaster. The only thing that the military understands is war; their mentality is geared towards defending the borders against enemies. A country that is governed by the military is always a recipe for disaster. 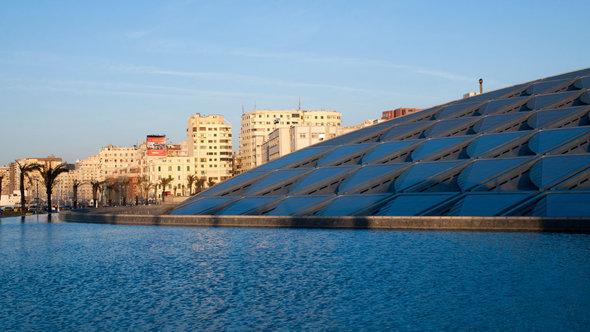 The Bibliotheca Alexandrina in Alexandria: for Youssef Ziedan, working here is a dream come true: "this is about the dream of reviving the free cosmopolitan spirit of Alexandria"

Ziedan: This is the first real revolution in Egypt. What happened in 1952 was a military coup, not a revolution. The situation we have now is something completely new in our history. It began as a social revolution. A great deal has happened in Egypt since January 2011. The revolution has impacted on us at every level of our everyday lives; in relationships, on the streets. Every area of our lives has been affected. A revolution is not a minor thing. But there is still a great deal that needs to be done. The army still has a lot of power and many members of the old regime are still around.

How would you assess the current situation in the country?

Ziedan: It is extremely critical, but much depends now on what we decide to do, on our work and on the next steps we take. The Egyptian people are actively committed to the country's future. My weekly columns, discussions on Facebook, talks, novels and academic books are my contribution.

Which party did you vote for?

Ziedan: For the Liberals. I should add, however, that I do not have a problem with the Islamists. I work with the cultural heritage after all. The particular approach I have does not suit the Islamists, but we are not enemies. The liberal approach is not the only one, but it is the best way for us to make progress more quickly.

In my book Arab Theology, I show how Islamic theology is based on Christian theology and also how it is related to Jewish thought and ideas. According to the prevailing view, Islam is a revealed religion. But the theology was not revealed; it is the work of Arab intellectuals. Islamic theology is not as pure as many Muslims believe. 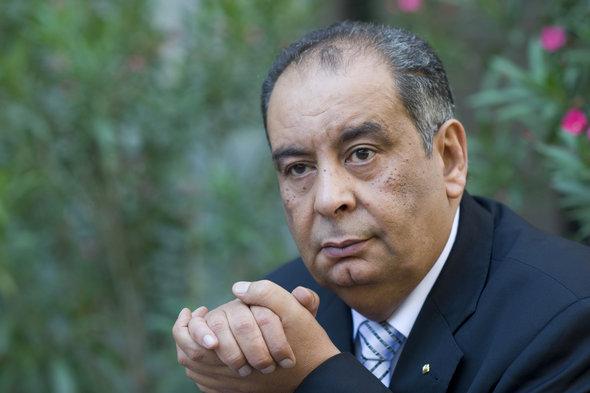 Youssef Ziedan is very aware of the significance of reading for the Egyptian population in these times of change and uncertainty: "People are seeking a way out of the misery. In this situation they need to become more aware, that is why they turn to reading," he says.

After producing countless academic books, your novel Azazeel turned out to be an Arabic bestseller. Why did you decide to turn your hand to literature?

Ziedan: It was not a clear-cut decision. I have been working for a long time on tearing down the internal barriers within the Arab cultural heritage. These barriers also include the ones that exist between Sufism and scholarly history. When I was preparing to write a theory of anthropology, one of my teachers advised me to try to find a way to express my ideas artistically, to turn them into a poem, a story or a novel and invite people in that way to ponder what I was saying. The idea appealed to me and I ended up writing my first novel, The Shadow of the Serpent.

Many of my friends and colleagues were shocked and appalled by this and asked me what I thought I was doing. I had written so many successful research studies, so why was I writing a novel of all things. It became a bestseller. When it came to my next book Azazeel, I couldn't do anything else but write it in the form of a novel. I needed my imagination and the power of imagery. It allowed me to address a wider audience rather than just the academics who read my other works.

The novel is about questioning authority. This is something that wasn't really done in Egypt until quite recently. Has the revolution also revolutionised the people and their mentality?

Ziedan: There's no doubt about it. People have broken away from the old ways of thinking and behaving, after all the years with the answers, instructions and attitudes of the authorities, who made people believe that they could do their thinking for them, politically as well as religiously. All my books deal with questions. Questions are the source of knowledge and awareness. We must ask profound and meaningful questions, about ourselves and about our existence. Fundamental questions. 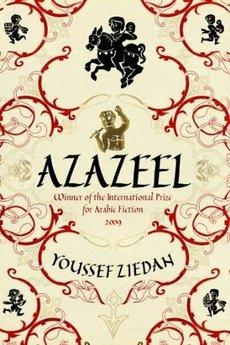 The novel "Azazeel" by Youssef Ziedan is about questioning authority. The book's success in Egypt shows that there has been a change in the way people there think and act: people are beginning to ask questions, and "Questions are the source of knowledge and awareness" says Youssef Ziedan

​​The novel Azazeel tries to teach us something ...

Ziedan: ... and it is very successful, that is, it represents a hidden side of Egypt. Authors have long been complaining that nobody in our country reads books. That has now changed.

Reading has become popular. Why is that?

Ziedan: There are many reasons. The literary and political debates on the Internet have helped a lot. Political authority has been getting weaker and weaker recently. People are seeking a way out of the misery. In this situation they need to become more aware, that is why they turn to reading. And not only novels. The biggest sellers in Egypt are sociological journals and books about our cultural heritage; then there are the books read for entertainment, such as Taxi by Khaled Al Khamissi, or novels such as Azazeel. The biography of Egyptian chemistry Nobel Laureate Ahmed Zuwel is also a bestseller here.

Would you say that writers paved the way for the revolution?

Ziedan: Blogging is very successful. People want to know everything. But the kind of insights it provides tend to be superficial and not very long-lasting. I believe, however, that any kind of reading helps to educate people, about themselves and about others. It is wonderful to be able to motivate someone to read. I organise literary salons in Alexandria and in Cairo, both are very popular, especially with young people. It makes me very happy, because they are our future.

Youssef Ziedan was born in 1958. He is a professor of Islamic philosophy. His main field of interest is Sufism. He is also director of the Manuscript Division of the Library of Alexandria. In addition to his numerous scholarly publications, Ziedan is also the writer of several novels. Azazeel has been published in eleven languages and was awarded the International Prize for Arabic Literature, also known as the Arabic Booker Prize, in 2009.

Alaa Abd el-Fattah, arguably Egypt’s most prominent democracy activist, has just been handed another lengthy prison sentence. Despite this, a book of his writing has recently been ... END_OF_DOCUMENT_TOKEN_TO_BE_REPLACED

People in Arab countries have been talking more openly about sex and sexuality for some time now, especially on social media. And for the first time ever, they have the vocabulary ... END_OF_DOCUMENT_TOKEN_TO_BE_REPLACED

A prominent rights group in Egypt, the Arabic Network for Human Rights, is ending operations just as the country braces for a controversial NGO law. Is this the beginning of the ... END_OF_DOCUMENT_TOKEN_TO_BE_REPLACED

Moncef Marzouki was Tunisia's first democratically elected president after the fall of dictator Ben Ali. Today he is the most prominent critic of increasingly counter- ... END_OF_DOCUMENT_TOKEN_TO_BE_REPLACED

Asef Bayat, professor of Sociology at the University of Illinois, Urbana-Champaign, has been studying revolutions and how they affect people since 1979. In his recent book, " ... END_OF_DOCUMENT_TOKEN_TO_BE_REPLACED

Every year in December, the team at Qantara.de takes a look back at the articles that proved most popular with our readers. This year is no different. Here is a run-down of the ... END_OF_DOCUMENT_TOKEN_TO_BE_REPLACED
Author:
Susanne Schanda
Date:
Mail:
Send via mail

END_OF_DOCUMENT_TOKEN_TO_BE_REPLACED
Social media
and networks
Subscribe to our
newsletter