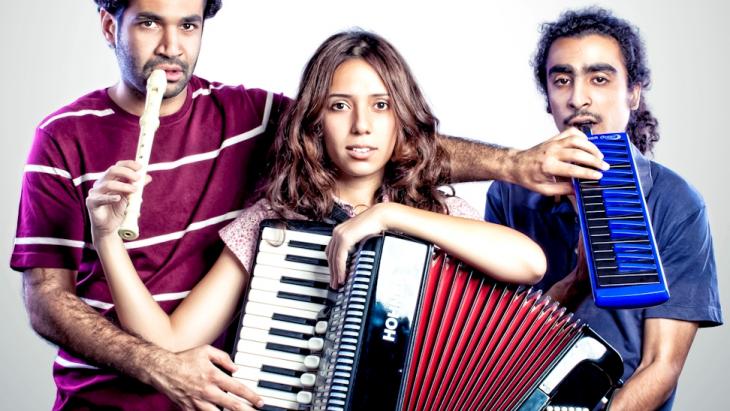 Interview with Youssra El Hawary
Music of a Quiet Revolution

In the wake of Egypt's Revolution, Youssra El Hawary suddenly came to fame with her song about a wall, "El Soor". Despite her insistence that she is non-political, her music is – in a quiet and unobtrusive way – unique and revolutionary. Marian Brehmer met the artist in Berlin

What does the music scene in Cairo look like now?

Youssra El Hawary: There's this new thing in Cairo that people call "Mahrajen". "Mahrajen" means "festival" and it's usually a kind of spontaneous party. People use old computers to create electronic sounds, which they mix with their voices. A "mahrajen" usually takes place in deserted buildings, sometimes in a minibus or a van. Music has always been spontaneous in Egypt and it is very much rooted in our culture – just look at our weddings, for instance. Apart from all the music that has evolved during the revolution, this spontaneous music is very important to us.

How did you experience the revolution in your country?

Youssra El Hawary: I was completely taken aback. When people sent out the first protest appeals on Facebook, we just made fun of them. Then a few days later, everybody was suddenly out on the streets. We were all very excited, thinking, "Oh my God, can it really happen?" It was magical. I guess we discovered some feelings inside us that we didn't know existed, such as a sense of how much we love our country. It's this hidden power inside of you, an immense belief in yourself, that was triggered by the events.

What is happening in Egypt right now?

Youssra El Hawary: I feel very restless sitting here in Berlin while my country is in turmoil. I have to check my mobile every few minutes to see if there's any news. But I've always been optimistic about the situation. 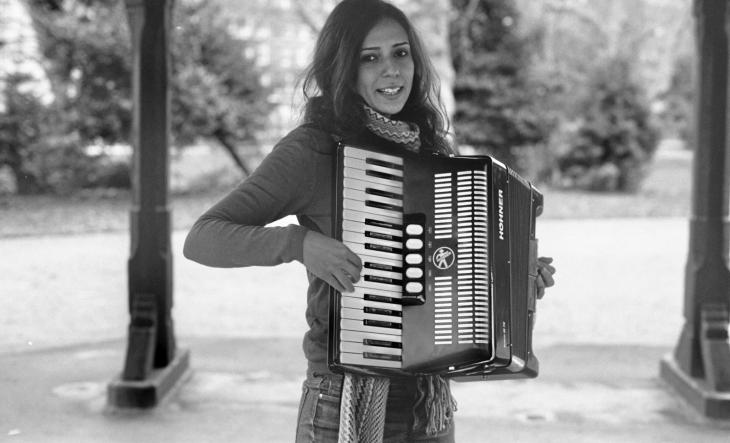 Born in 1983, Youssra El Hawary is part of a new generation of Egyptian musicians. "Before, famous singers used to produce songs from texts by our writers. But now young girls express what is really on their minds," she says

And I always said that change was going to take a long time. What makes me very optimistic about Egypt's future is that people now know how to say “no”. When you walk around Cairo now, everyone is talking about politics. The old generation was very negative, but young people now are generally more optimistic. I've always been optimistic about my country.

Nevertheless, you often sing about the little annoyances of day-to-day-life in Egypt, like being stuck in Cairo's traffic. What's the most irksome thing about living in Egypt?

Youssra El Hawary: We're still very much controlled by too many traditions. There are rules and we don't really know why they exist. Just take families, for instance, and what they say about each other. But I can definitely say that the revolution has brought about some change. People have started thinking about the term "freedom" in a serious manner. Now everybody is wondering what it really means when people say: "the street is yours".

Have you always lived in Cairo?

Youssra El Hawary: Well, actually I was born in Kuwait. Like many Egyptians my parents went to the Gulf for work. But now I feel at home in Cairo. I travel a lot and I've noticed that I can't live anywhere else anymore. But actually living in Cairo is really bad. The city never sleeps and it sucks energy out of you. But at the same time it's so dynamic. It really has become a cultural hub, and new venues are being opened all the time.

What motivated you to pick up the accordion?

Youssra El Hawary: I am part of a choir project called the "complaint choir". They needed a new instrument. Then I noticed I still had an accordion at home. I had played it in my school days. So I tried playing it again and refreshed my skills. I like this instrument because it can be used for both western and oriental sounds. The accordion often appears in our Arabic folk songs.

Your first song "El Soor" became an instant success after you uploaded it on YouTube. What's the idea behind it?

Youssra El Hawary: It all happened quite spontaneously. I found the poem "El Soor" (The Wall) by the Egyptian caricaturist Walid Taher and liked it. The poem is a kind of satire on the walls people build to separate each other: "In front of the wall/In front of those who built it/In front of those who made it high/Stood a poor man/Who peed/On the wall, and on those who built it and those who made it high." The poem does not relate to any specific wall, but more to the idea of walls confining people in general. When I turned it into a song and it became associated with the walls in Tahrir, it took on another meaning.

How did these walls come about?

Youssra El Hawary: At that time, the military had put walls up in the streets leading to Tahrir Square. Traffic became very bad in the area. Whenever something happened, they built a new wall. I composed my song during the course of one night. I called a friend who is a photographer to shoot the video in front of one of these walls – it was her first shoot. We made the video in the early hours of the morning. All the people who appear in the clip just happened to have been passing by. That is what's special about the clip.

Why do you think "El Soor" was such a hit?

Youssra El Hawary: Because the song is about the revolution. It speaks of something everyone can relate to. Everyone is annoyed about the walls. And although the song deals with a serious matter its language and melody are funny. But some people criticized me for using the word "to pee" in my song. I am a girl and this word has never been used in a song before. Still, I didn't really expect a reaction like this.

Do you consider yourself to be a voice of protest?

So what are your plans now?

Youssra El Hawary: I never dreamed about becoming a singer. It was all by chance. I guess that's what makes my music pure and honest in a way. I don't accept any offers from studios to publish my music. But something that intrigues me about the change in Egypt is that a lot of girls now have their own musical projects. Before, famous singers used to produce songs from texts by our writers. But now young girls express what is really on their minds.

Tourists have been returning to Tunisia, Egypt and Morocco. But, given the global uncertainty caused by the Ukraine war, will the comeback be enough to save a struggling sector, ... END_OF_DOCUMENT_TOKEN_TO_BE_REPLACED

In this essay, renowned Lebanese journalist and writer Hazem Saghieh asks whether the Arab Levant, which stretches from Iraq in the east to Egypt in the west, will remain an ... END_OF_DOCUMENT_TOKEN_TO_BE_REPLACED

By 2050, the Middle East and North Africa could be dealing with many more elderly people suffering from dementia. A lack of facilities, specialists and local knowledge means the ... END_OF_DOCUMENT_TOKEN_TO_BE_REPLACED

With his fist bump greeting for a man he previously called a pariah, US President Biden has paved the way for Saudi Crown Prince Mohammed bin Salman's return to the international ... END_OF_DOCUMENT_TOKEN_TO_BE_REPLACED
Author:
Marian Brehmer
Date:
Mail:
Send via mail

END_OF_DOCUMENT_TOKEN_TO_BE_REPLACED
Social media
and networks
Subscribe to our
newsletter