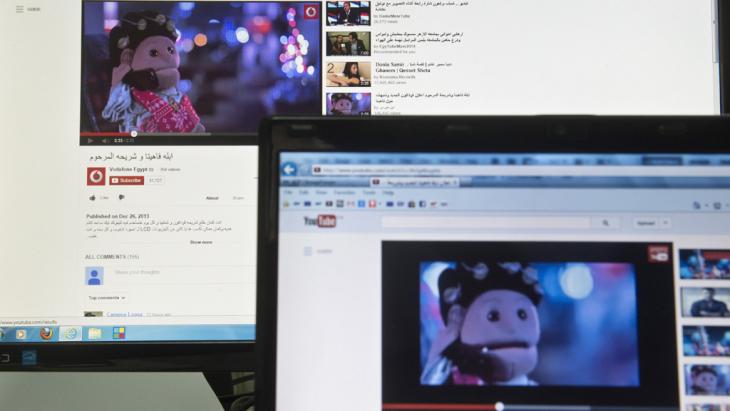 Investigations against a cloth puppet in Egypt

Theatre of the absurd

Egypt is currently hooked on a real-life satire playing out before its eyes: the country's public prosecutors are investigating a TV puppet on suspicion of terrorism. Karim El-Gawhary reports from Cairo

We may only be one week into 2014, but Egypt already seems to have a contender for political comedy highlight of the year. At the moment, the Egyptian public prosecutor's office is conducting an official investigation into Abla Fahita, a popular Egyptian television puppet modelled on the Muppet characters.

The proceedings have been triggered by accusations made by a self-proclaimed terrorist hunter and conspiracy theorist named Ahmed Zbaydar (Spider), a pro-Mubarak youth activist, who has gone on Egyptian television, accusing the puppet of providing terrorists with coded information about future attacks.

Coded messages for the Muslim Brotherhood

The messages are supposedly embedded in an advertising film made by telecommunications giant Vodafone, which has been airing on the company's YouTube channel for the past few days. Ahmad Spider's accusations centre on a four-branched cactus in one scene. He claims that the cactus is a reference to the "four-finger campaign", a movement that was against the military coup and is sympathetic to the Muslim Brotherhood, and that one of the Christmas decoration balls hanging from the cactus is meant to symbolise a bomb.

In a television show on New Year's day, Ahmad Spider claimed that Mama Toutou, another puppet appearing in the advertising clip, is a code for the Muslim Brotherhood, which was recently declared a terrorist organisation by Egyptian authorities. In addition, he claims that the video clip contains a hidden reference to a planned terrorist attack on a shopping centre.

The whole story could simply have been filed away under the heading "bizarre" were it not for the fact that the public prosecutor's office have since demanded that representatives of Vodafone appear in court as part of investigations into the case. Vodafone has commented that the uproar over the puppet is completely "irrational".

Vodafone was at pains to explain that the video clip featuring the puppet is merely an attempt to explain how to reactivate a lost SIM card and to advertise the product. "I don't really know what to say. I am sad that our thinking has now sunk to such a level," said Khaled Hegazy, a spokesman for Vodafone.

The story reached another ridiculous high point when the Egyptian television station CBC broadcast a two-way Skype interview with Ahmad Spider, who filed the charges, and the puppet Abla Fahita. Spider repeated his allegations and also claimed that the puppet was in reality a creation of the British intelligence services. Meanwhile, Abla Fahita remained completely calm at the other end of the Skype connection and explained, "When a person doesn't understand something, if they are clever, they try to understand it and learn something; if they are feeble-minded, they claim it is the devil's work."

At one point in the conversation, Ahmad Spider actually said to the puppet, "I will put you behind bars before the week is out." The fact that accusations made by conspiracy theorists are being taken seriously by the public prosecutor shows how tense the atmosphere in Egypt has become.

Egyptian social media, such as Facebook and Twitter, have experienced a virtual explosion of malicious glee resulting from the story. There is even a #FreeFahita hashtag on Twitter.

The change in U.S. president is also having an impact on the conflict between Turkey and Greece. Since the USA has started to play the Greek card, the strategic situation in the ... END_OF_DOCUMENT_TOKEN_TO_BE_REPLACED

Arab women played a leading role in the protest movement of 2011. Since then, ongoing social transformation has had a considerable impact on their lives. What is their assessment ... END_OF_DOCUMENT_TOKEN_TO_BE_REPLACED

They’ve already got the Louvre; they’ll soon have a Guggenheim Museum as well – and now the Emirates have added literature to their quest for cultural supremacy in the Arab world ... END_OF_DOCUMENT_TOKEN_TO_BE_REPLACED

Years in the making, Sisi's elite New Administrative Capital will isolate most Egyptians from their centres of government in an effort to fortify the regime against any social ... END_OF_DOCUMENT_TOKEN_TO_BE_REPLACED

Professor Timothy Brennan's "Places of Mind: A Life of Edward Said" is a detailed biography of one of the most important intellectuals of the twentieth century, taking us on a ... END_OF_DOCUMENT_TOKEN_TO_BE_REPLACED

China has long portrayed itself as a strong supporter of the Palestinian cause. It has also claimed that in sharp contrast to the stance of the USA, its position is based on ... END_OF_DOCUMENT_TOKEN_TO_BE_REPLACED
Author:
Karim El-Gawhary
Date:
Mail:
Send via mail

END_OF_DOCUMENT_TOKEN_TO_BE_REPLACED
Social media
and networks
Subscribe to our
newsletter