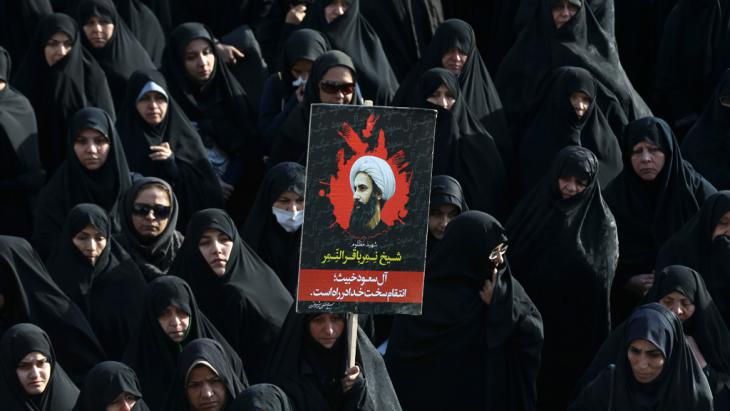 The rivalry between Iran and Saudi Arabia is not confessional in nature. Both lay claim to regional supremacy and also to the leading role in the Islamic world – maximalist positions that naturally provoke confrontation. An essay by Ali Fathollah-Nejad, political scientist with the German Council on Foreign Relations

The year 2016 has begun with an escalation in the regional rivalry between Saudi Arabia and Iran. The execution by Saudi Arabia of the Shia cleric Nimr al-Nimr together with 46 other dissidents came across, in the difficult current domestic and foreign policy climate, as an act of provocation.

The ensuing attacks by a mob of ultra-hardliners on the Saudi embassy in Tehran and the consulate in Mashhad were the straw that finally broke the camel's back. These propelled the power rivalry afflicting the entire region to an ominous level. Riyadh broke off diplomatic relations with Iran and urged Bahrain and Sudan to do the same.

Iran′s Supreme Leader, Ayatollah Ali Khamenei, has meanwhile published a caricature on his website equating Saudi and IS executioners and predicted "divine vengeance". At a meeting with the Danish foreign minister in Tehran, President Hassan Rouhani expressed the hope "that European countries, which can be counted on to react to issues of human rights will also fulfil their human rights responsibilities in this case."

Tehran's harsh criticism of the despicable mass executions is, however, anything but credible: after all, it is not Saudi Arabia, but Iran itself that recorded the highest global execution rate in 2015. So there could hardly be a greater irony than a theocracy that executes its opponents accusing another of doing the same.

Meanwhile Iran's centrist president was quick to condemn the attacks on Saudi Arabia's diplomatic premises and blamed these on "extremist individuals". After all, for his process of rapprochement with the West, set to bear fruit this year, the attacks represent an own goal – with unforeseeable foreign policy consequences. In an attempt at damage limitation, the Iranian police arrested more than 40 people in connection with the attacks. 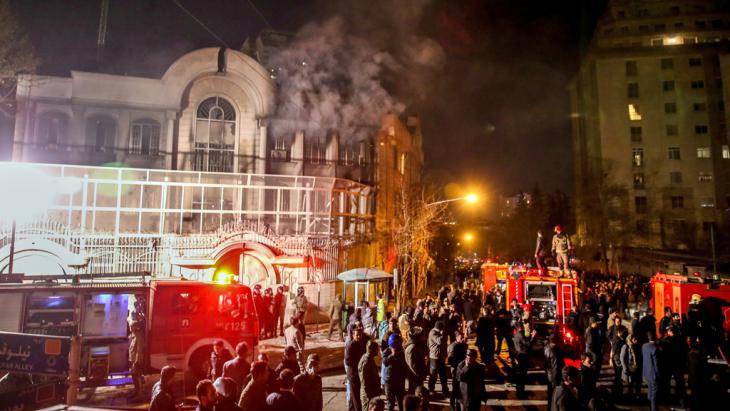 The latest escalation in the Iran Saudi conflict: for years, Shia Iran and Sunni Saudi Arabia have been competing for supremacy in the Gulf region. Riyadh is concerned that the atomic agreement could strengthen Tehran′s position. The recent tension was triggered by the execution of the Shia cleric Sheikh Nimr Baqir al-Nimr in Saudi Arabia. Demonstrators attacked the Saudi embassy in Iran. On Sunday (03.01.2016) the Saudi government announced in Riyadh that it was breaking off diplomatic relations with Iran

This new escalation undoubtedly plays into the hands of hardliners on both sides. Those in the Islamic Republic who fear for their political, ideological and economic sinecures as a result of their country's detente with the West, may now sense an opportunity to knock this off course to a significant degree.

But the frustration felt at the attacks on the diplomatic premises goes beyond the governmental camp. For example, critical voices were also heard from the supreme commander of the Tehran Revolutionary Guard as well as from the paramilitary Basij militia. Moreover, the Friday Prayer Imam Ahmad Khatami – otherwise known for statements of a martial nature – said that such acts "achieve nothing" – an argument that could also come from the government.

Just as in Saudi Arabia, several domestic policy issues are simmering in Iran: the reformist daily Bahar was recently banned and Ayatollah Khamenei is warning that elections scheduled for February could be used by the US to effect change in the Islamic Republic – a thinly veiled warning to those power circles allied with the government.

It should be noted that this Iranian-Saudi rivalry is not confessional in nature, the continuation of an "age-old enmity" (Sueddeutsche Zeitung) between the Sunni and Shia branches of Islam. Instead, this interpretation has played an integral role in an imperial policy of divide and rule, one that flourished in particular most recently in the first decade of the 21st century. The violent US-led removal of the Saddam Hussein regime in 2003 and the destruction of the Iraqi state prepared the ground for Iran's rise in power and influence, a process that reached its climax in the mid-2000s. Saudi Arabia reacted to this with an increasingly aggressive anti-Iranian, anti-Shia discourse, which has polluted the regional climate ever since. Riyadh has also failed to exert political influence in Iraq – its embassy in Baghdad only just reopened this January after 25 years. 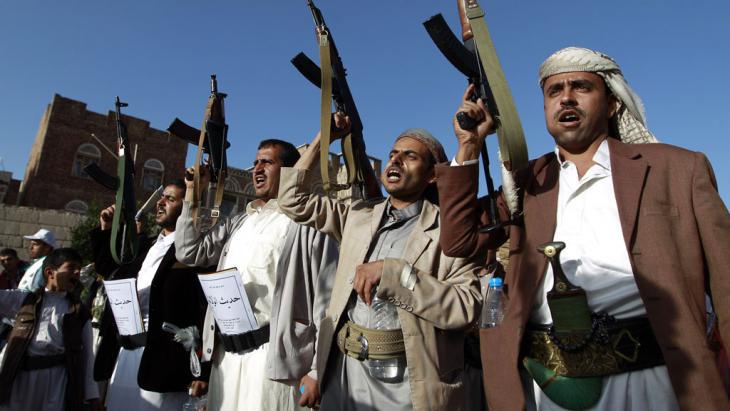 Civil populations bear the cost of proxy wars: "Nevertheless, the biggest losers in this new escalation are the long-suffering people of the region. Any glimmer of hope for political solutions in Syria and Yemen, which essentially depend upon an understanding between Riyadh and Tehran, is now as good as extinguished," writes Ali Fathollah-Nejad

The problem, on the other hand, is that Iran and Saudi Arabia are pursuing geopolitical targets that are incompatible with each other. Both lay claim to regional supremacy and also to the leading role in the Islamic world – maximalist positions that naturally provoke a confrontation.

American-led regime change in Iraq and recently, the process of rapprochement with regional arch rival Iran has whipped up a huge Saudi furore against the US. Riyadh accused Washington of having handed the region to Tehran on a silver platter and trampling the interests of its Saudi ally underfoot in the process. The lesson Saudi Arabia learned was to impose its claim on power itself and not always in co-operation with Washington, for example in Syria through the support of radical-Islamist groups. The Iranian government now faces tremendous challenges. The regional geopolitical omens for the detente process with the West are now extremely bleak.

Nevertheless, the biggest losers in this new escalation are the long-suffering people of the region. Any glimmer of hope for political solutions in the region's multiple theatres of conflict, especially Syria, many of which essentially depend upon an understanding between Riyadh and Tehran, is now as good as extinguished. Both sides are now more likely to deepen their engagement on opposing sides of said crises. 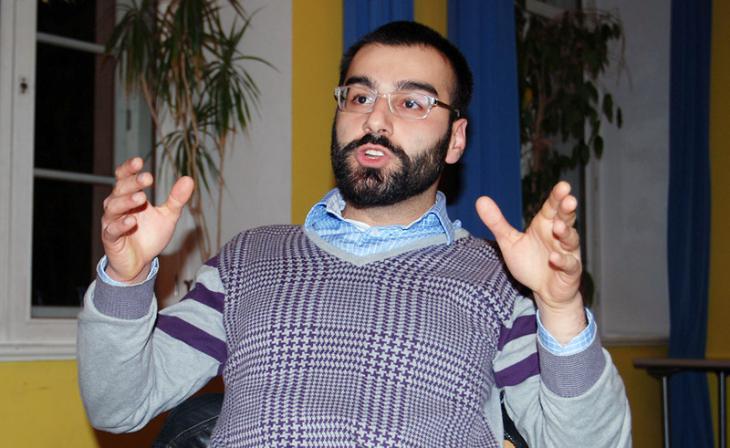 Ali Fathollah-Nejad became a fellow of the German Council on Foreign Relations (DGAP) in June. The German-Iranian political scientist studied in France, Germany and the Netherlands and received his doctorate in International Relations from the School of Oriental and African Studies (SOAS, University of London). He is also a research associate with the Deutsches Orient-Institut (DOI) and at the Centre of International Cooperation and Development Research (CECID) of the Universite libre de Bruxelles

As far as the West is concerned, all this means that the balancing act between rapprochement with Iran and business as usual with the Saudis as the main partner in the Gulf – one that is in any case highly complex and not underpinned by any strategy whatsoever – will be even less successful. It has for a long time failed to pursue a pan-regional strategy that would, through pressure if necessary, accelerate the establishment of inclusive security architecture from outside – and the effects of this are now being felt.

All in all, the role of the West remains ambivalent. The lucrative weapons trade with the sheikhdoms in the Gulf, a kind of recycling of the petrodollars there, cannot be sustained without a betrayal of democratic values. Then there is a further massive credibility problem: recent history and lately the rapprochement with the Islamic Republic has made it obvious that the West will remain silent over human rights abuses if the authoritarian regimes concerned act as partners. This is also currently the case in its relations with Cairo and Ankara.

For sure, realpolitik has never hinged on moral standards, but the West's obvious use of double standards has not escaped the attention of both regional states and civil societies – and this is not without consequence. It is therefore not enough to maintain, as the German Foreign Office has, that the "Middle East owes the world something" – a statement that reveals the extent of helplessness and perplexity more than anything else.

The task is now to help de-escalate the situation, while at the same time thinking seriously about how to involve regional and non-regional actors in an essential process of pacification. The West does have the means to exert influence on the Saudi dynasty – all be they at best symbolic. Reversing its weapons export policy would be one step, if overdue, in a region that can aptly be described as a powder keg.

Abolhassan Banisadr, who has died aged 88, was a thoughtful, French-educated, Islamic intellectual who accepted the presidency of Iran in 1980 despite his opposition to Ayatollah ... END_OF_DOCUMENT_TOKEN_TO_BE_REPLACED

The streaming festival "Female Voice of Afghanistan" by the Zeitgenössische Oper Berlin gives Afghan female musicians a global platform – at a time when their situation has ... END_OF_DOCUMENT_TOKEN_TO_BE_REPLACED

While Bashar al-Assad is still shunned by the West, which blames him for a decade of brutal war in Syria, a shift is under way in the Middle East, where Arab allies of the United ... END_OF_DOCUMENT_TOKEN_TO_BE_REPLACED

Iranian-German author and filmmaker Siba Shakib was born in Tehran. Her best-selling novels deal with themes of heritage and the past. She speaks to Qantara.de about her new novel ... END_OF_DOCUMENT_TOKEN_TO_BE_REPLACED

How did the Islamic revolutionaries deal with prostitution and sex workers in Iran, and how does the business of sex work in Iran today? Have supply and demand changed four ... END_OF_DOCUMENT_TOKEN_TO_BE_REPLACED

END_OF_DOCUMENT_TOKEN_TO_BE_REPLACED
Social media
and networks
Subscribe to our
newsletter