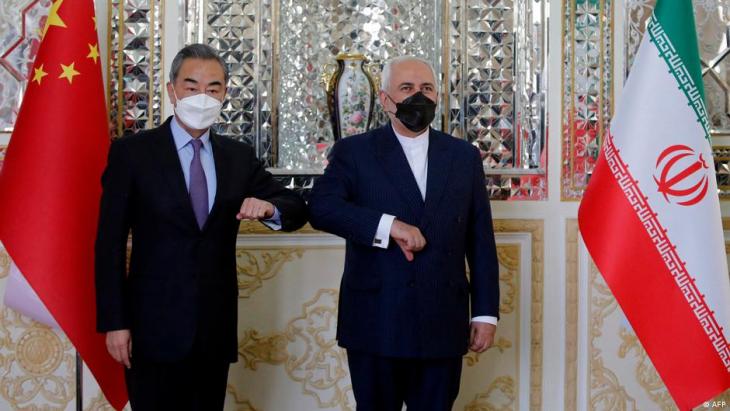 On 27 March, Iran and China signed a 25-year accord intended to foster "strategic co-operation". Despite ongoing uncertainty over the deal's actual scope, content and chances of realisation, the agreement has been hailed by Iranian officials as nothing less than a game-changer when it comes to securing the interests of the Islamic Republic. By Ali Fathollah-Nejad and Amin Naeni

While most countries these days are seeking supplies of COVID-19 vaccines to get rid of quarantine restrictions and re-open their economies, Iranian politicians seem to regard the recent 25-year accord with China as a vaccine against Western pressure, particularly U.S. sanctions. According to their narrative, the deal will not only boost Iran's much-plagued economy, it will also create a stable alliance between Iran and "the East" to counter U.S. hegemony and threats.

In fact, the agreement has been vaunted as a part of Iran's "Look to the East" foreign-policy orientation, through which Tehran tries to align with China and Russia to form a bloc against U.S. unilateralism. Although this eastward geopolitical outlook became an Iranian foreign policy preference under the Mahmoud Ahmadinejad administration in the 2000s, it has now resurfaced under the presidency of Hassan Rouhani.

The Rouhani administration claims the 25-year agreement is the result of the United States' withdrawal from the JCPOA and the EU's unwillingness to honour its economic obligations under that agreement. However, for a more accurate portrayal, we need to glance back to January 2016 when, during a visit by China's President Xi Jinping to Tehran, both sides announced their willingness to negotiate a quarter-century bilateral co-operation deal – an announcement that coincided precisely with the JCPOA's implementation. Although the pact is therefore part of Tehran's long-standing desire for economic growth without dependence on the West, it goes beyond the economy per se and reveals a bigger picture. 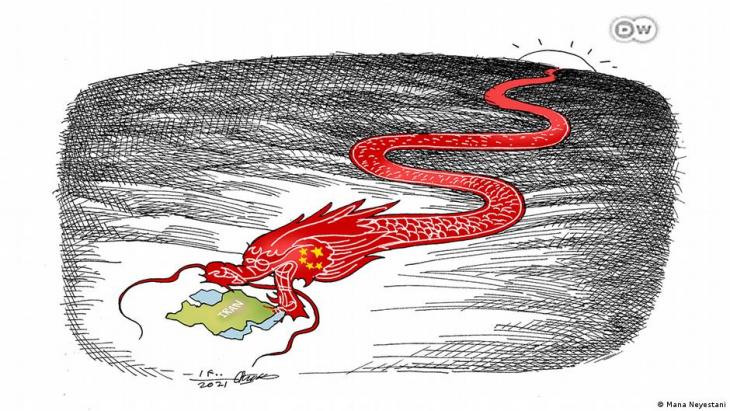 In summer 2020, when the prospect of an agreement with China became a topic of hot domestic debate in Iran, Tasnim, a hardliner-affiliated news agency, published a piece stressing that Iran's "Look to the East" strategy and the 25-year accord could play a major role in securing the interests of the Islamic Republic: "An important part of the challenges between the Islamic Republic of Iran and the West is related to identity and cultural issues, yet in the case of developing relations with China, there is less cultural concern as Chinese culture is not aggressive and currently cannot pose a threat".

Fars News, another hard-line news agency, also supported the deal, highlighting that China would thereby acknowledge Iranian power in the Middle East and reject U.S. "maximum pressure". IRNA, the state broadcaster viewed to be close to the so-called moderate Rouhani administration, wrote: "Undoubtedly, China's presence in the Middle East and, consequently, its active role in Iran can herald a new chapter in Iran's balanced co-operation regarding scientific, economic, industrial, commercial and technological development."

Over the past week, Iranian officials have attempted to promote the 25-year accord as a breakthrough, while emphasising that it is of huge benefit to Tehran. Ali Shamkhani, the secretary of the Supreme National Security Council (SNSC), tweeted: "The signing of the Iran-China Strategic Partnership Roadmap is part of the policy of active resistance. The world not only comprises the West, and the West is also not only composed of rules-breaking America and the promises-breaking three European countries."

U.S. President Joe Biden's brusque reaction to the Sino–Iranian deal, i.e. that the issue had been on his mind for a year now, elicited this response from Shamkhani: "Biden's concern [regarding the Iran-China deal] is entirely correct; the flourishing of strategic cooperation with the East is accelerating the decline of the United States." For his part, Mohammad-Bagher Ghalibaf, speaker of the hard-line-dominated Iranian parliament, took to Twitter to write: "The signing of a strategic document with China is a major factor behind generating power within the framework of a look to Asia and Eurasia with a balanced and economy-driven foreign policy approach." 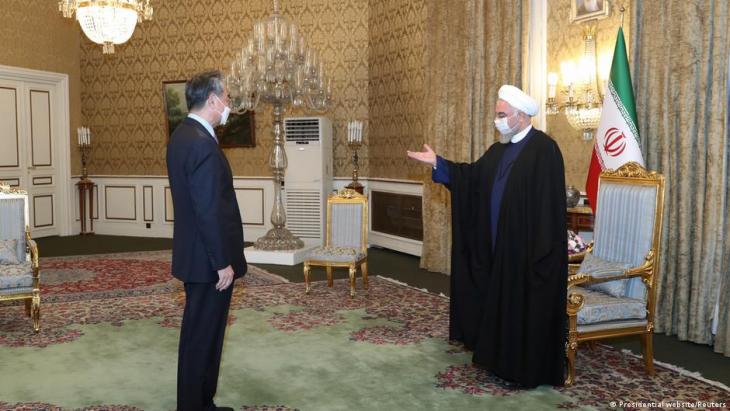 The Rouhani administration claims that the 25-year agreement with China is the result of the United States' withdrawal from the JCPOA and the EU's unwillingness to honour its economic obligations under that agreement. But, write Ali Fathollah-Nejad and Amin Naeni, "it goes beyond the economy per se and reveals a bigger picture." Pictured here: Chinese Foreign Minister Wang Yi (left) meets Iranian President Hassan Rouhani during his recent visit to Tehran

Hesamodin Ashna, adviser to President Rouhani, went one step further, describing the deal as signalling the failure of the U.S. "maximum pressure" policy, warning that "from now on, time is not in their [the West's] favour." For Mojtaba Zonnour, chairman of Iran's parliamentary national security and foreign policy committee, since China will become "the world's largest economy in the near future", it can "undo [the effects of U.S.] sanctions." He added that "we would like to sign the same agreement with Russia" because "we have not seen a 'regime change' view [negâh-e barandâzâneh] from China and Russia toward the Islamic Republic over the past decades." Next to China, Russia is another pillar of Iran's "Look to the East" outlook.

Officials from other establishment camps have also defended the 25-year pact. For instance, Mohammad-Hossein Malâ'ek, former Iranian ambassador to China (December 1997–November 2001) under reformist President Mohammad Khatami, rejected any criticism of the deal, hailing it as a "turning point in Iran's foreign policy" that would have "significant impacts on regional and international relations structures."

Open questions and an uncertain future

To sum up, based on the narrative provided by the Islamic Republic's officials as well as its media, the agreement with China seems certain to vaccinate Iran's economy against undue Western pressures. Those peddling the official line tend, however, to overlook the role of the West, particularly that of the U.S., in this equation. For instance, it remains largely unclear how this 25-year deal will develop its full potential and satisfy Iranian desires, particularly given past and current experiences in Sino-Iranian relations, when depth and scope have often been subjected to U.S. policy.

In this vein, Majid-Reza Hariri, chairman of the Iran–China Joint Chamber of Commerce and Industries, recently highlighted Iranian frustrations as "bilateral trade had fallen from nearly $52 billion in 2014 to around $20 billion in 2020, including unofficial oil sales, the lowest over 16 years." In this vein, Arman-e Melli, an Iranian daily, in an article entitled "25-year ambiguities?", raised the question that as "China has not completed its commitments under U.S. sanctions, will there be any mechanism in the deal to avoid such behaviour [in the future]?" 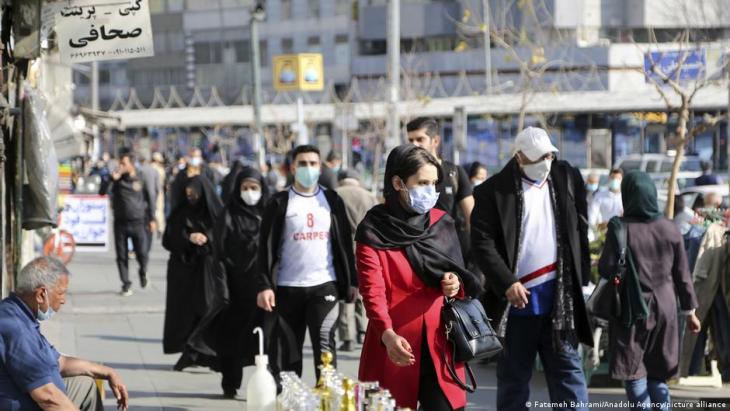 Tehran, February 2021: Iranians struggling with economic problems and the cost of living in the country are hoping that U.S. President Joe Biden will lift sanctions soon. Ali Shamkhani, the secretary of the Supreme National Security Council (SNSC), on the other hand, says that "the flourishing of strategic cooperation with the East is accelerating the decline of the United States"

Against this background of the triangular dynamics between Iran, China and the U.S., Ghassem Moheb-Ali, a retired Iranian diplomat, says "the [China] agreement will benefit Tehran if we improve our ties with the West and create bargaining leverage towards both the East and West." This echoes earlier calls for Iran to have "a 'diverse basket of relations' with different countries". Moreover, even if U.S. sanctions were to be lifted, Irano-Chinese commercial relations are likely to be prevented from reaching their full potential as long as Iran's banking system remains blacklisted by the global money-laundering and terrorism-financing watchdog, the Financial Action Task Force (FATF). As a result, as Mohsen Abdollahi, Associate Professor of International and Environmental Law at Tehran's Shahid Beheshti University, cautions, "due to the sanctions and disapproval of FATF bills, there can be little hope for the future of this co-operation document."

By and large, it remains to be seen how Tehran and Beijing will fill the gap between the official Iranian narrative on one side and recent experiences in their bilateral ties within the realities of the international system. The unresolved enmity between Iran and the West is therefore likely to continue to cast a shadow over Iran's prospects for fulfilling its economic desires vis-à-vis China.

In conclusion, while Iranian officials have been quick to proclaim that the 25-year accord with Beijing will work as a vaccine for Tehran, it seems more likely that the Iran-China deal will merely be a first dose. The considerably more important second dose would be for Iran to find pragmatic solutions in its conflict with the West, thus removing those extraterritorial U.S. sanctions and its FATF blacklisting otherwise guaranteed to hamstring realisation of the 25-year deal with China.

Amin Naeni, project researcher at the University of Tehran's Department of Regional Studies.

Analyst Iyad El-Baghdadi examines the ongoing tensions between the United States and the two Gulf states – Saudi Arabia and the UAE – and their geopolitical implications in ... END_OF_DOCUMENT_TOKEN_TO_BE_REPLACED

From the Euphrates to the Mekong, dams that ensure one country's water supply risk leaving others parched. But shared water resources can be a source of peace as well as conflict ... END_OF_DOCUMENT_TOKEN_TO_BE_REPLACED

For over fifty years, British photographer Peter Sanders travelled across the Middle East and further afield, seeking out the saints of Islam. His work uncovers a little-known ... END_OF_DOCUMENT_TOKEN_TO_BE_REPLACED

Europe's double standard on refugees, exposed yet again by the war in Ukraine, is morally deaf and geopolitically dumb. Europe can only defend itself by persuading developing and ... END_OF_DOCUMENT_TOKEN_TO_BE_REPLACED
Author:
Ali Fathollah-Nejad and Amin Naeni
Date:
Mail:
Send via mail

END_OF_DOCUMENT_TOKEN_TO_BE_REPLACED
Social media
and networks
Subscribe to our
newsletter