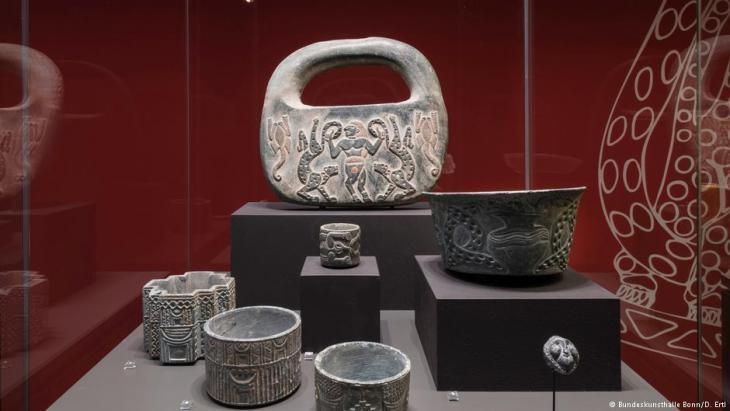 Iran exhibition: "Ancient Culture between Water and Desert "
The cradle of civilisation

Ancient Persians were visually oriented and close to nature. Artefacts that only narrowly escaped theft are now on show for the first time outside Iran. The German exhibition reveals the origins of present-day Iran. By Sabine Oelze

Jiroft, a fertile plain located 230 kilometres south of the city of Kerman, is now reminiscent of a large piece of Swiss cheese or a gigantic molehill after thieves looted the ancient tombs there.

A photograph in the exhibition "Iran. Ancient Culture Between Water and Desert" in Bonn's Bundeskunsthalle museum shows the extent of the devastation. The thieves planned to sell their valuable plunder at auctions in the West. At the last minute, however, police succeeded in arresting them and securing the cultural relics.

They are now making their debut outside Iran for the very first time. The part of the collection on show in Bonn includes clay statues of praying men and women, terracotta figurines, gold jewellery, jars, vases and other vessels made of chlorite, alabaster and soapstone.

The richly decorated artefacts provide a great deal of information about the daily life of the inhabitants of southeastern Iran during the Bronze Age, as well as their beliefs and myths. Scenes of combat and mythical heroes wrestling with animals of prey are recurring motifs on the vessels. On one of them, a muscular man is holding two leopards in the air by their tails. On another, a river seems to be flowing out of the foreheads of water buffalos, while another arises out of the coils of a snake. 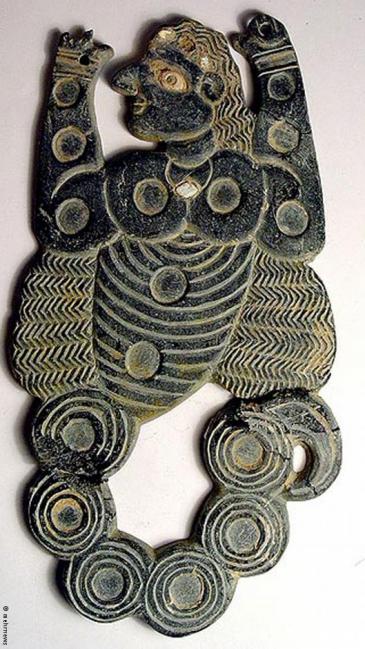 Curator Barbara Helwing explains the figures of mystical muscular men, "These are divine beings doing superhuman things. It's all about subjugating nature's wild forces," She adds with a chuckle, "Nowadays, Iranians promote their gyms with this muscle man."

"These are divine beings doing superhuman things. It's all about subjugating nature's wild forces," explains curator Barbara Helwing, who worked for the German Archaeological Institute in Iran until 2007. She adds with a chuckle, "Nowadays, Iranians use the image of this muscle man to promote their fitness studios."

In 2003, Iran made an effort to retrieve the objects stolen from the plain of Jiroft, recounts Helwing. "What we're exhibiting comes from the first confiscated collection of objects found in Jiroft. They were recovered from Sothebys and other auction houses."

How the region was settled

Numerous multimedia stations provide visitors with all kinds of information about Iran. The region's geography is determined by the meeting of several tectonic plates: their collision resulted in the formation of huge mountains.

Around 7000 BC, richly vegetated oases flourished in the fertile valleys, on the fringes of deserts and on the shores of the Caspian Sea - perfect locations for people to settle down. Additional settlements also developed in remote valleys in the mountains that offered protection against attacks carried out from the Mesopotamian lowlands.

Around 3800 BC, the first city-state with a centralised administration was established in Iran. Animated films in the exhibition show that the people were quite capable of complex city planning. Cylinder seals imprinted with architectural drafts prove that even multi-storey buildings were constructed.

After a devastating fire destroyed the city of Chogha Mish, the already densely populated city of Susa became a significant trade centre. Donkeys, camels and ships served as means of transport for the sale of copper and silver.

The influence of nature

The exhibition's 400 items enable the visitors to travel back to the very beginnings of civilisation and a culture that was both visually oriented and close to nature. "These cultures drew their visual inspiration from their surroundings. Back then, wild goats roamed the Zagros Mountains where people founded the first settlements. They can be found decorating the jars and pots," says Susanne Annen, co-curator of the exhibition.

In approximately 3000 BC, Iran splintered into fiefdoms. Military leaders were buried together with their daggers, as a finding from the Caspian Sea shows. Animal-inspired relics found in the tombs once served in drinking rituals that were celebrated at graves. People drank from gold goblets decorated with vultures, ibexes and goats. 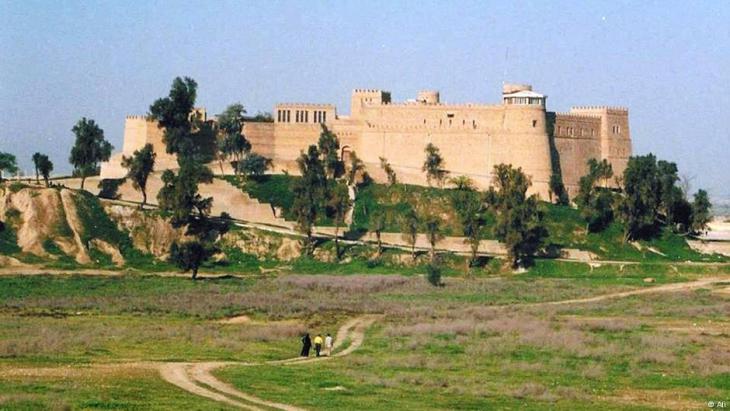 Shush castle is located in the ancient ruins of the old town Susa in the province Khuzestan, Iran. It was build by the French archaeologist Jean-Marie Jaques de Morgan in the late 1890s to serve as a secure base for archaeological research and excavations.

Jewellery from the tomb of two princesses

The relics found in Jiroft aren't the only archaeological treasures to be leaving Iran for the first time. Also on display are the luxurious objects, mainly gold jewellery and bracelets, found in the tomb of two Elamite princesses. The Elamite tomb containing two female skeletons in two bronze sarcophagi from the sixth century B.C. was discovered by construction workers in 2007 near the village of Jubaji close to the Persian Gulf. The princesses had been provided with objects for their journey to the next world.

"It was great that these rings were inscribed. They allowed us to decipher the names of their ancestors, which is how we have a direct reference to the royal Elamite family," said Helwing. The Elamites mostly settled in the lowlands located in the southwestern region of present-day Iran.

The exhibition ends in a green area. A Persian paradise garden stretching over 400 square metres has been reconstructed in the inner courtyard of the Bundeskunsthalle based on the existing garden of a huge house in Iran. Exotic flowers, fountains and a balcony decorate the garden where visitors can relax while absorbing an ancient civilisation marked by its great love for fantastical decoration.

Mourad al-Marouai was just nine when a landmine killed him on a beach in war-torn Yemen, a tragedy that will haunt his family forever. After a swim, the little boy "suddenly ... END_OF_DOCUMENT_TOKEN_TO_BE_REPLACED

This year’s Morgenland Festival opened with the premiere of Kinan Azmeh’s musical theatre piece, “Songs for Days to Come”, based on fifteen poems by contemporary Syrian poets. ... END_OF_DOCUMENT_TOKEN_TO_BE_REPLACED

Rumi's poems, though generally stripped of their Islamic symbolism, are hugely popular around the world. Yet Islamic mysticism is still very much at the heart of these verses. ... END_OF_DOCUMENT_TOKEN_TO_BE_REPLACED

The Ukraine war is changing the global geopolitical landscape. Ali Khamenei, Iran's most powerful man, is already cosying up to Russia in anticipation of a harsh post-war reality ... END_OF_DOCUMENT_TOKEN_TO_BE_REPLACED

Analyst Iyad El-Baghdadi examines the ongoing tensions between the United States and the two Gulf states – Saudi Arabia and the UAE – and their geopolitical implications in ... END_OF_DOCUMENT_TOKEN_TO_BE_REPLACED

The Ukraine war has seen energy prices spike with oil producers in the Middle East making more money than ever. But will it put the brakes on long-planned reforms to diversify oil ... END_OF_DOCUMENT_TOKEN_TO_BE_REPLACED
Author:
Sabine Oelze
Date:
Mail:
Send via mail

END_OF_DOCUMENT_TOKEN_TO_BE_REPLACED
Social media
and networks
Subscribe to our
newsletter