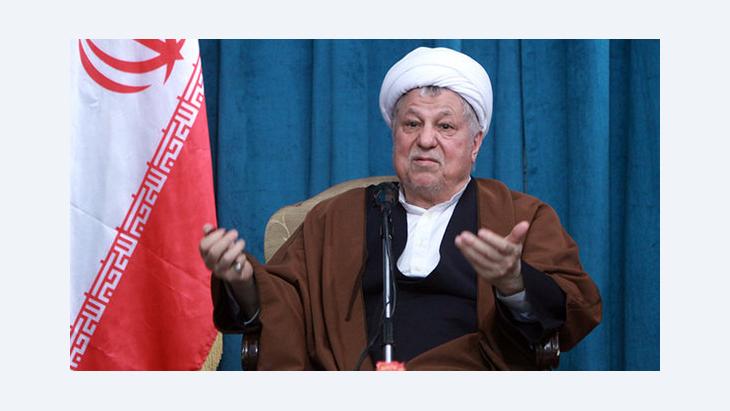 For Ali Akbar Hashemi Rafsanjani, a man viewed as the architect of the Islamic Republic who was the nation's most powerful figure for two decades, the outcome of presidential elections this coming June has already been decided: The reformers don't stand a chance, as Supreme Leader Khamenei will in any eventuality install his chosen candidate. By Ali Sadrzadeh

"I meet the revolutionary leader every Tuesday, and we talk openly about everything. We're like brothers and have known each other for 50 years!" This remark was for a long time part of ex-president Ali Akbar Hashemi Rafsanjani's standard repertoire, so that no one would doubt his loyalty to Ayatollah Khamenei.

But it was on a Tuesday, on 9 April to be precise, that the provisional end of this enduring friendship between two men became public, a friendship that has had such a decisive influence on the history of the Islamic Republic.

Just a few hours before setting off for his weekly meeting on this particular day, the 79-year-old gave an audience to several dozen ex-provincial governors who – according to a report by the Iranian news agency Saham News – asked him to reconsider standing for election in the upcoming presidential poll. The agency quoted one participant, who requested anonymity, as saying that only Rafsanjani can pull Iran out of this hopeless mess.

But Rafsanjani, reverentially referred to by his supporters as the "man for a crisis", rejected the request. Rafsanjani began his speech by saying that he would not be standing for election; that the Supreme Leader wouldn't like it. He then issued the astonishing explanation: "He no longer has any faith in me!"

With this sentence, not only did the once-mighty Rafsanjani concede his own powerlessness, at the same time he also destroyed the hopes of his supporters, who know that without Khamenei's blessing, a candidacy appears impossible. Two days later, after this admission had long entered the public domain on websites, in newspapers and on all manner of television broadcasts from the BBC right through to Al-Arabiya, Rafsanjani finally issued a lukewarm disclaimer. While this did not call into the question the meeting with the former governors, it homed in on reporting of the event and the "choice of words", which he described as questionable. 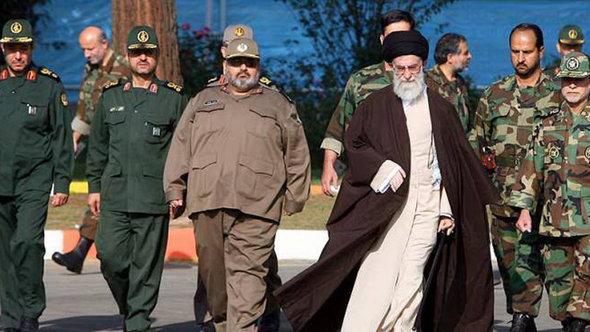 Circle of power: Rafsanjani not only criticised revolutionary leader Ali Khamenei (third from right) but also the omnipotence of Iran's Revolutionary Guard which in recent years has taken an ever more assertive role in virtually every aspect of Iranian society

Regardless of the inflection of Rafsanjani's comments, it does not detract from the alarming nature of his gloomy, indeed frightening analysis of the political and economic future of the theocracy. Rafsanjani said that Khamenei disputed the fact that Iran is in deep crisis, both at home and in its foreign relations.

Rafsanjani told the ex-governors that the Supreme Leader does not believe that the nation needs a national unity government. And as far as the issue of the future president is concerned, Khamenei plans to pursue his own agenda, or in other words to push his own candidate.

Rafsanjani's speech shattered the reformers' cautiously budding hopes of being granted some involvement in the imminent presidential poll. Several attendees at the meeting implored former president Rafsanjani to at least campaign for Mohammed Khatami, if he has no plans to stand himself. The response was swift and negative: "Ask Mr Khatami yourselves!"

After Rafsanjani's carefully-expressed complaints about Supreme Leader Khamenei, his unilateral stance and his resistance to counsel, Rafsanjani also took a heavy swipe at the Revolutionary Guard, which he said effectively rules the nation controlling everything and everybody. This despite the fact that the former president is himself said to have paved the way for the involvement of the Revolutionary Guard in the state-run economy.

The omnipotence of the Revolutionary Guard

There was no other option in the end, Rafsanjani told his audience by way of apology. After the eight-year war with Iraq, they had to be occupied in some way – for example in road construction and other major projects, particularly as they had the technical equipment at their disposal. But at the time, there was no way of knowing where all this would lead in the future – and the measures had certainly not been part of any grand plan.

And just where has it all lead to now? – Rafsanjani summed it up thus: At present, the Revolutionary Guard controls the nation's entire economy and political life; its power is unlimited in every respect. Rafsanjani, who is viewed as the architect of the Islamic Republic and who will soon be 80 years old, also summarised his statements on the omnipotent Revolutionary Guard in a pregnant and telling sentence: "They'll only be happy when they own the entire country!"

Home
Print
Newsletter
More on this topic
State Surveillance in Iran: ''There's No Such Thing as Your Own Four Walls''Parliamentary Elections in Iran: A Well-staged ShowPower Struggle in Iran: The Might of Oil
Related Topics
Islamism | Political Islam, Shia Islam | Shiite Muslims
All Topics

A sci-fi film lampooning the Islamic Republic and all that its regime holds sacred premiered quietly at a nondescript venue in Los Angeles in July. The title, “Velayatnameh”, is a ... END_OF_DOCUMENT_TOKEN_TO_BE_REPLACED

The Palestinian militant organisation Hamas, with Hezbollah's help, is building up a military presence in Lebanon, the ultimate consequences of which could be devastating, writes ... END_OF_DOCUMENT_TOKEN_TO_BE_REPLACED

With his fist bump greeting for a man he previously called a pariah, US President Biden has paved the way for Saudi Crown Prince Mohammed bin Salman's return to the international ... END_OF_DOCUMENT_TOKEN_TO_BE_REPLACED

Days of protests across Iran followed the collapse of a high-rise building in the city of Abadan in May 2022. But why has the disaster become such a political issue? Rahman ... END_OF_DOCUMENT_TOKEN_TO_BE_REPLACED

Millions in Idlib depend on aid coming through a northern border crossing. On 10 July, the UN Security Council votes whether to keep it open. The decision may hinge not only on ... END_OF_DOCUMENT_TOKEN_TO_BE_REPLACED

Mourad al-Marouai was just nine when a landmine killed him on a beach in war-torn Yemen, a tragedy that will haunt his family forever. After a swim, the little boy "suddenly ... END_OF_DOCUMENT_TOKEN_TO_BE_REPLACED
Author:
Ali Sadrzadeh
Date:
Mail:
Send via mail

END_OF_DOCUMENT_TOKEN_TO_BE_REPLACED
Social media
and networks
Subscribe to our
newsletter