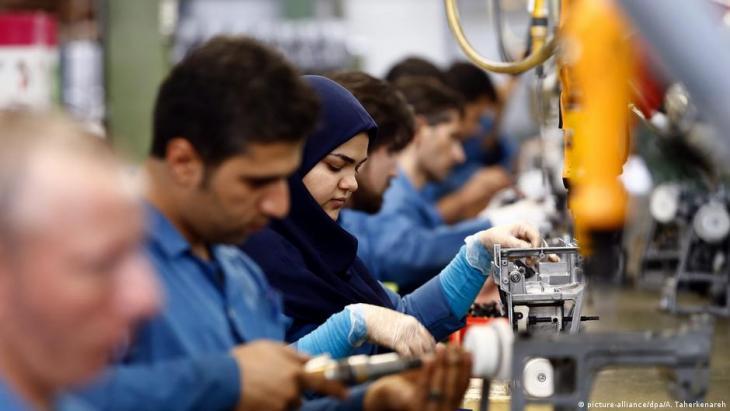 Talks to salvage the 2015 Iranian nuclear deal have entered their eighth round in Vienna. Even if a deal is struck and some of the sanctions are lifted, the state of the Iranian economy is such that there can be little hope that any relief provided by a revived agreement will trickle down to the general population. By Ali Fathollah-Nejad

In the Islamic Republic of Iran, politics and the economy are inextricably linked. This is because the country's post-revolutionary elite holds the reins of both political and economic power in its hands. This elite originally intended to replace the Shah regime in order to help the poorest members of society (referred to as the mostazafin, or downtrodden). In reality, however, the Islamic Republic became an oligarchy, thereby reproducing the class-based antagonisms that existed under the monarchy, albeit with a completely new line-up of players. To say that the throne of the monarch was simply replaced with the turban of the ayatollahs would be an apt symbolic illustration.

The groundwork for this was laid as far back as the 1979 revolution, when a considerable portion of the Shah elite's wealth was confiscated by the new rulers, who also used these assets to create the religious foundations known as bonyâd. These foundations were officially set up to support the aforementioned mostazafin (and were in some cases even named after them), but as time went on, they developed into commercial-clerical complexes that mainly served to line the pockets of the new ruling elite.

At the same time, the Islamic Republic set the political economy on an ideological foundation. A societal division implemented by the Khomeinists separated regime insiders (khodi) from regime outsiders (qeyr-e khodi), i.e. into members of the ruling apparatus and pro-regime clans or at least those that are loyal to them – a status that grants privileged access to power and resources – on the one hand and those who do not belong to these groups and are therefore barred from those same advantages on the other. To this day, this invisible wall of a "theocratic apartheid state" (Mohssen Massarrat) has lost little of its potency.

Because the career prospects for many regime outsiders are minimal, many well-educated young Iranians have to choose between accepting jobs for which they are over-qualified and that are often precarious (helping to create a new social stratum of "middle-class poor") or emigrating. 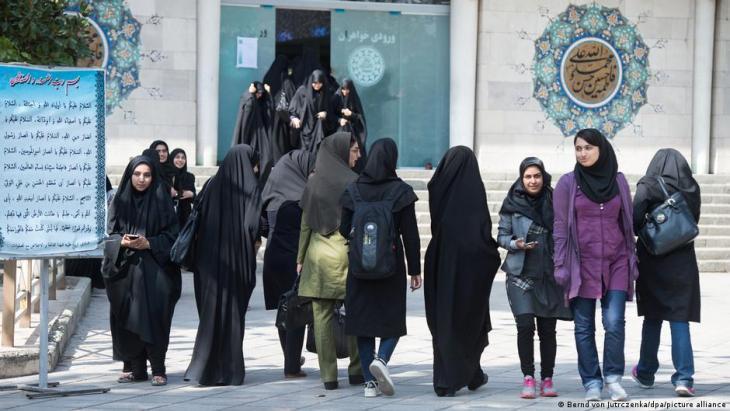 "According to official figures, up to 40,000 educated Iranians have left the country per annum in recent years. This brain drain is costing the country an estimated US$150 billion every year – a sum that exceeds national annual oil revenues. Iranian authorities themselves recently sounded the alarm over what they describe as this 'intellectual haemorrhaging'," writes Ali Fathollah-Nejad. Pictured here: female students on the campus of the University of Tehran

According to official figures, up to 40,000 educated Iranians have left the country per annum in recent years. This brain drain is costing the country an estimated US$150 billion every year – a sum that exceeds national annual oil revenues. Iranian authorities themselves recently sounded the alarm over what they describe as this "intellectual haemorrhaging".

The figures reveal that in the last three years alone, just under 4,000 medical doctors and around 300,000 academics with masters' or doctorate degrees have left the country, including 900 "well educated" university lecturers in the year 2020. Despite Western assumptions to the contrary, this brain drain continued during the era of sanctions-easing that followed the 2015 nuclear deal under President Hassan Rouhani, who was misconceived as a moderate.

After the post-revolutionary decade of the 1980s, which was characterised by a planned economy and eight years of war with Iraq, a process of economic neo-liberalisation began in the 1990s. But the Iranian take on neoliberalism was different to that of the West, because it was always illiberal and perverted into what one may call clientalistic privatisation. A new class of nouveaux riches – once described by Forbes as "mullah millionaires" – emerged.

Just as in pre-revolutionary Iran, income from the sale of oil and gas is the engine of the economy. Even though oil revenue's share of the annual budget has decreased, it still accounts for most of Iran's  crucial foreign currency revenues, despite the country's multi-faceted industrial infrastructure. The largest economic entities in the Islamic Republic are all state-owned or semi-state-owned and function as quasi mono-capitalist units. The largest of these is the state-owned National Iranian Oil Company (NIOC) followed by the economic empire of the Islamic Revolutionary Guards (IRGC), which is estimated to account for up to two-thirds of GDP and is assigned continually increasing funds by the government.

In third place is a clerical-commercial complex consisting of a network of bonyâds, with no public accountability or tax obligations. It accounts for an estimated one-fifth of GDP. The wealthiest of these religious foundations is the Bonyâd-e Âstân-e Qods-e Razavi, which was led by Iran's new president, Ebrahim Raisi, from March 2016 until April 2019. He was appointed to the post by the Supreme Leader Ali Khamenei, who later named him Chief Justice. 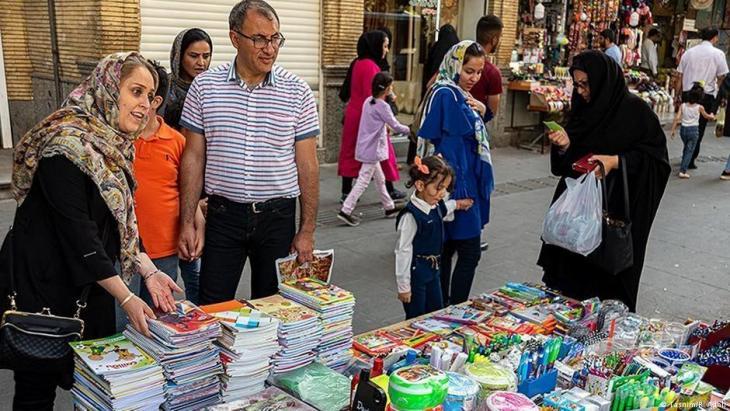 It was largely state and semi-state entities that profited from the economic upswing that followed the 2015 nuclear deal. Yet despite GDP growth, the income gap actually widened. "It is important to keep this in mind with respect to a rekindling of trade with Iran after the currently-envisaged revitalisation of the nuclear agreement, especially if the aim is to foster – through economic cooperation – a sustainable development that doesn't just enrich the ruling classes and further widen social inequalities," writes Ali Fathollah-Nejad. Pictured here: people shop at a market in Tehran

The private sector is highly marginalised in the economy of the Islamic Republic, even though it is this sector that creates jobs and not the state oil industry, which is capital-rich but not labour-intensive.

International comparisons reveal that cronyism, corruption and bad governance are rampant in Iran. Moreover, all of this is closely linked to incompetence, especially as appointments are often made on the basis of ideological-political motivations rather than actual qualifications.

It is precisely the Islamic Republic's political economy that is closely bound up with the nation's increasing socio-economic woes. For the most part, it was the above-mentioned state and semi-state entities that profited from the economic upswing that followed the 2015 nuclear deal. However, despite that GDP growth, the income gap actually widened. It is important to keep this in mind with respect to a rekindling of trade with Iran after the currently-envisaged revitalisation of the nuclear agreement, especially if the aim is to foster – through economic cooperation – a sustainable development that doesn't just enrich the ruling classes and further widen social inequalities.

This gap has already led to huge social frustration in Iran – a frustration that spilled over into nationwide anti-regime protests in late 2017/early 2018. This was the first time that the lower classes – today's mostazafin, so to speak – took to the streets en masse to voice their anger at the entire regime, chanting radical revolutionary slogans that took equal aim at all elements of the country's ruling elite – clerical, military, reformist and hardliner alike. 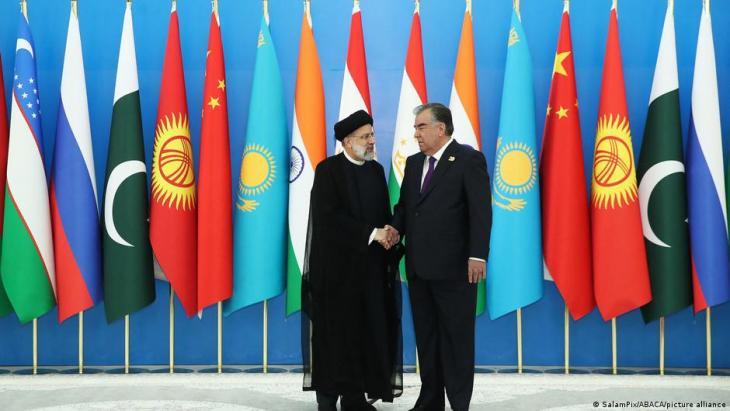 It was a shock for the elite, especially as the lower classes were routinely viewed as the regime's social base and at least loyal to it. This historic, altered dynamic between the poor and the now oligarchic rulers of the Islamic Republic also emerged in the protests of November 2019. Official figures say that 200,000 people took part in these protests – four times as many as in the rallies just under two years previously. The frequency of national revolts is increasing – and there is much to suggest that this development should  be understood as the start of a "long-term revolutionary process" similar to that experienced by Arab Spring nations.

Meanwhile, the social disparities continue to grow. About half of Iranians live below the poverty line (the official figure is 30 percent) and the middle class has shrunk dramatically in recent years – two developments with hugely explosive political potential.

Moreover, despite the Covid-19 pandemic and crippling US sanctions, the number of Iranian dollar millionaires grew by 21.6 percent to 250,000 in 2020. Worldwide, this figure grew by just 6.3 percent. The Forbes report from mid-2021 coincided with the expansion of an unprecedented strike by contract workers in the oil industry. The average monthly wage of an Iranian worker is less than US$200.

The way economists in Europe and Iran view the links between US sanctions and Iran's economic crisis could hardly be more divergent. While the former blame most of Iran's economic woes on foreign sanctions, domestic experts view the impact of sanctions as marginal and hold up the aforementioned problems at home as the single most important factor for the country's almost chronic economic crisis.

In summary, it can be said that the largely structural economic crisis gripping the Islamic Republic is unlikely to be sufficiently relieved through an economic recovery if sanctions are eased as a result of a revived nuclear deal. Nor is it probable that any emergent economic growth after such a deal would trickle down to average Iranians. As a result, the socio-economic crisis will continue to hammer the country, with little hope that the elite will come up with any effective policy response to defuse the explosive social situation. After all, the economic populism of President Raisi has thus far yielded no material fruits whatsoever for the population despite the new hardline elite's unprecedented access to the country's wealth and resources.

Ali Fathollah-Nejad is author of Iran in an Emerging New World Order and a non-resident senior research fellow with the Afro–Middle East Centre (AMEC), Johannesburg. He was formerly Iran expert with the Brookings Institution in Doha (BDC) & the German Council on Foreign Relations (DGAP).

Iranian author Fariba Vafi is adept at describing everyday scenes and concealing within them something ambiguous, in parts strange and grotesque. She writes novels – which have ... END_OF_DOCUMENT_TOKEN_TO_BE_REPLACED

In her latest exhibition in Japan, Farzaneh Khademian depicts figures who seem detached from their surroundings. In interview with Qantara.de, the Iranian photographer and painter ... END_OF_DOCUMENT_TOKEN_TO_BE_REPLACED

The catastrophic human rights situation in Bahrain is being largely ignored by the rest of the world. Despite all the damning evidence, which includes a Human Rights Watch report ... END_OF_DOCUMENT_TOKEN_TO_BE_REPLACED

Every year in December, the team at Qantara.de takes a look back at the articles that proved most popular with our readers. This year is no different. Here is a run-down of the ... END_OF_DOCUMENT_TOKEN_TO_BE_REPLACED

Four musicians – two Iranian, two Indian – have created an album of music inspired by the poetry of Rumi. Like the poet's works, the album advocates tolerance, inclusivity and ... END_OF_DOCUMENT_TOKEN_TO_BE_REPLACED

END_OF_DOCUMENT_TOKEN_TO_BE_REPLACED
Social media
and networks
Subscribe to our
newsletter