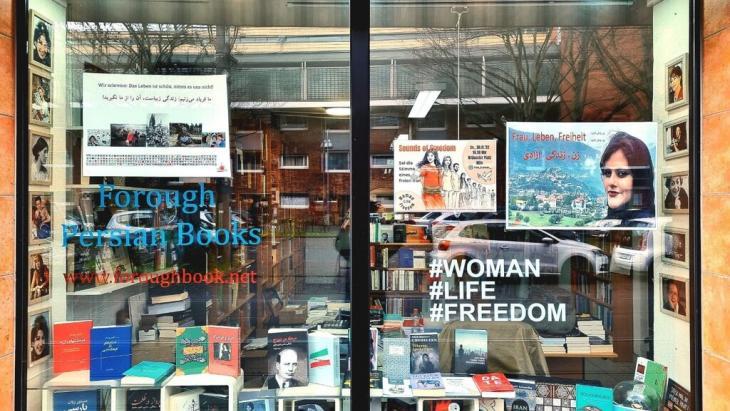 Iranian literature in exile
"A great demand for Persian books"

Cologne-based publisher Anahita Redisiu sells Persian books that have been banned or censored in Iran. She regards the situation in Iran with concern and has harsh words for Germany's stance towards the Iranian regime. Gerrit Wustmann spoke to her about politics and literature

Ms Redisiu, alongside Nakojaa in France, Forough is one of a handful of publishers releasing Persian-language literature that has been banned in Iran. The publishing house and the Cologne bookshop were founded by your parents in the 1990s. What led them to take this step?

Anahita Redisiu: My parents established the Forough bookshop on International Women's Day 1998, although neither of them were booksellers. My mother had studied social work, my father civil engineering. For them it was about a link to the homeland, and literature had always been important to them. Books had always played a crucial role in our house.

What's more, they themselves had fled the country for political reasons and wanted to remain politically active. They never gave up hope of a free Iran. Also, even back then there was a great demand for Persian books. Many Iranians were living in Cologne in the 1990s, people like us who couldn't visit their homeland because it would've been too dangerous.

The shop and publishing house are named after the poet Forough Farrokhzad...

Anahita Redisiu: Yes, she was one of the most influential Iranian women writers of the twentieth century. For me, as a woman, she's a role model because despite huge obstacles – within society and even within her own family – she wrote about her innermost emotions. It was unprecedented. Courageous women like her paved the way for later generations. 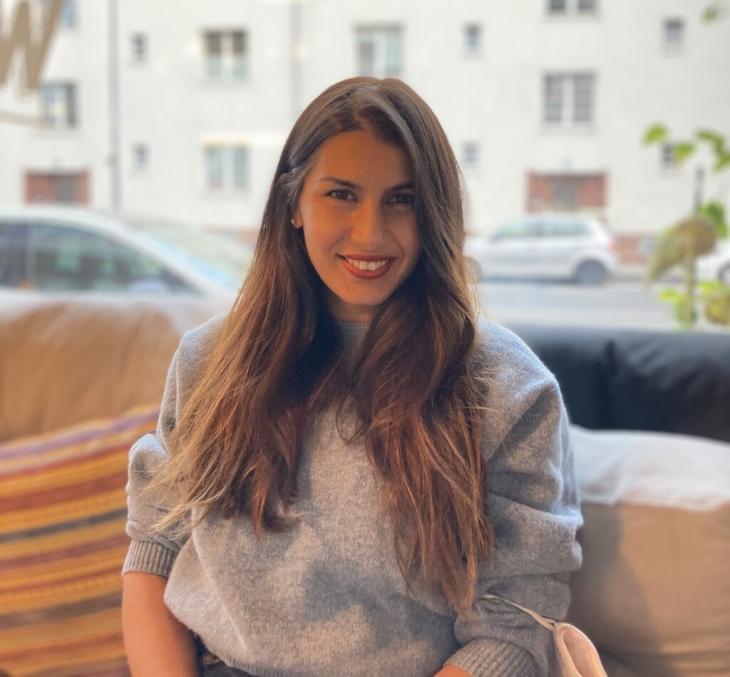 Publisher and bookseller Anahita Redisiu refers to the protests in Iran as "a revolution – a feminist revolution supported by almost all sections of society" and goes on to say that she suspects that the people venting their anger on the streets feel that they no longer have a choice: "Either they free themselves from the regime or they continue to vegetate in a life shaped by constraints that they reject"

How do you find the books you publish?

Anahita Redisiu: The main criterion is that a book is either banned in Iran or can only appear in a censored version. Our books are available worldwide, just not in Iran. This aspect is more important than economic considerations. And of course, we consider whether the book will be of interest to Iranian readers. This also includes translations from other languages into Persian and books by Iranian writers in exile as well as uncensored editions of works only available in abridged form in Iran.

Can you give an example of a book published by Forough and banned in Iran that is of particular importance to the people in the country and in exile?

Anahita Redisiu: Yes, for example Monireh Baradaran's book Erwachen aus dem Albtraum (Waking from the Nightmare), which was published in German. In it, she writes about the nine years she spent in Iranian detention. Unfortunately, the book has lost nothing of its relevance, although it deals with the 1980s.

Then there are books by Manouchehr Bachtiary and Mahmoud Sabahy about the Baha'i religious minority, which is persecuted in Iran. Bachtiary, for example, sees Tahirih as a pioneer of the contemporary women's movement, tracing it back to the moment she removed her veil at an event in the year 1848 as an initial act of protest for female emancipation and gender quality.

In the past you've said you'd be happy if pirate copies of your books were to appear in Iran – why?

Anahita Redisiu: Iran is one of the few countries not to have ratified the international copyright agreement. That means anyone wanting to publish a book in Iran doesn't have to engage with whoever owns the rights. That's also why most translations of foreign literature in Iran are, to a certain extent, pirated. Of course, this is a problem for writers and publishers, which is why many are trying to change that in Iran.

But for us at Forough, our priority is that the books are read, in particular by those who aren't allowed to read them. That's why I'm pleased when I see these books are finding their way to Iran. I think the young generation there is much further on than you or I when it comes to assessing the situation, but it's the older, conservative-religious generation that would really benefit from exposure to banned texts. And at the moment, pirate copies or digitally shared texts are the only option. 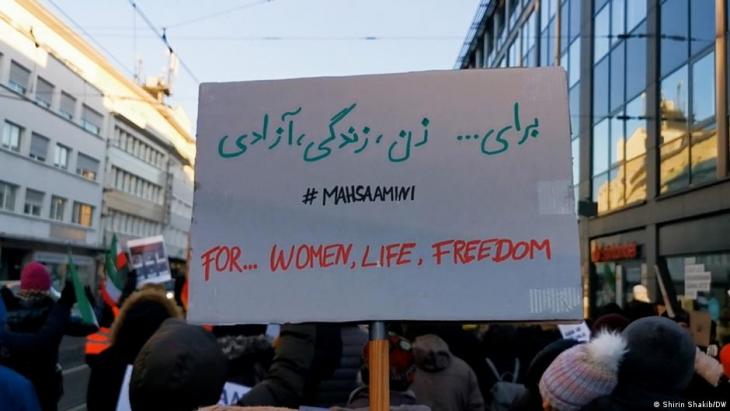 People in Bonn, Germany, demonstrate their support for the protesters in Iran on 17 December 2022. Anahita Redisiu is adamant that the German government could do more to support the protesters: "What purpose does it serve if the foreign minister only expresses her sympathy under pressure, or if half-hearted sanctions are imposed, while Iran continues to be a key trading partner for German businesses?" she asks.

The regime even views minors as a threat

More than 1,000 people have been arrested in Iran since September. Among them are also many writers, artists and journalists – how does their situation look right now?

Anahita Redisiu: At present we're seeing that the regime obviously views children as a such a threat that it is killing them at demonstrations, so we can imagine the predicament of people who are standing up for free speech and democracy. The regime is afraid and realises it is no longer wanted by the vast majority of society. Confessions are extorted under duress and torture or by threatening relatives. Everyone knows these are not genuine confessions.

There have been repeated protests against the regime since the 1990s. In 1999, it was the students who protested. They were joined in 2009 by sections of the country's middle class, and in recent years many of the demonstrators were labourers, teachers, trade unionists. The protests were brutally crushed every time. What's different this time round?

Anahita Redisiu: I wouldn't call them protests anymore, but a revolution – a feminist revolution supported by almost all sections of society. I can't speak for them, but I suspect that people see that they no longer have any choice. Either they free themselves from the regime or they continue to vegetate in a life shaped by constraints that they reject. If young people – girls in particular – live at home and online like other young people in Europe, for example, but are then trapped in all these religious rules in public, it creates huge psychological pressure.

They have to promise their parents to wear their head coverings and not to meet boys – not because their parents are against it, but because their parents are afraid for their children. There are parties and underground cafés, but you never know if the person standing next to you might be from the regime, or whether the authorities will just show up and take everyone away. The young generation in Iran is very self-assured and doesn't correspond to the clichéd image that many people in Germany have of it.

Some Iranians benefit from the status quo

More than two-thirds of Iranians boycotted the last election to de-legitimise the regime. Who is the minority that continues to support the administration?

During the Arab Spring, many regimes were toppled, but truly democratic ideas were only implemented in Tunisia – albeit only for a limited length of time. Do you think the outlook is better in Iran?

Anahita Redisiu: The problem is that there's no clear opposition. Many members of the opposition were murdered or are in exile or in prison. Others are under house arrest, which means that they can no longer rally their supporters. There are a number of streams within the opposition in exile, for example those who support the son of the shah, but like me, they don't exactly know what the people there really want.

I think it could work as long as there's no Western interference, like there is in other countries in the region. That's often misunderstood: the Iranians aren't calling for military intervention by the West, they simply want the West to stop handing power to the regime by continuing to maintain close economic ties, for example.

Is the German government doing enough to support the Iranian opposition?

Anahita Redisiu: No. What purpose does it serve if the foreign minister only expresses her sympathy under pressure, or if half-hearted sanctions are imposed, while Iran continues to be a key trading partner for German businesses? The means are there: there's the EU terror list, sanctions that haven't even come close to being exhausted, trade with the regime can be halted. Germany must understand that the regime isn't a partner and that there's no advantage to retaining the status quo. Quite the opposite, in fact. A democratic Iran, on the other hand, could be a partner.

Giessen, Eichsfeld, Kusel, Berlin – cars bearing old German number plates are the latest trend on the streets of Cairo. Many Egyptians regard the discarded plates as chic. What ... END_OF_DOCUMENT_TOKEN_TO_BE_REPLACED

Tunisia has been going through a severe economic and political crisis in recent years. More than one in three young people there are unemployed. For many skilled, qualified and ... END_OF_DOCUMENT_TOKEN_TO_BE_REPLACED

German imams have publicly expressed their solidarity with the women of Afghanistan. In a letter of protest, the clerics say that the Taliban regime's decree barring women from ... END_OF_DOCUMENT_TOKEN_TO_BE_REPLACED

At the end of every year, the team at Qantara.de gives you a run-down of the ten most-read articles on the site over the past 12 months. Here is a quick overview of the stories ... END_OF_DOCUMENT_TOKEN_TO_BE_REPLACED

Social engagement is often motivated by religious factors. A new book explores the background to these community efforts and appraises how effective they are in helping to ... END_OF_DOCUMENT_TOKEN_TO_BE_REPLACED

The government in the Netherlands, one of the last European nations to abolish slavery, has made an historic apology. But some feel that there is still a long way to go. By Ella ... END_OF_DOCUMENT_TOKEN_TO_BE_REPLACED
Author:
Gerrit Wustmann
Date:
Mail:
Send via mail

END_OF_DOCUMENT_TOKEN_TO_BE_REPLACED
Social media
and networks
Subscribe to our
newsletter