Off the Political Radar

One year after the protests against Ahmadinejad's disputed election victory, the green movement still does not have a coherent political strategy for fighting the regime, writes Karim Sadjadpour, expert on Iran at the Carnegie Endowment for International Peace in Washington

Poor organisation and no political concept: if the green movement really wants to challenge the government, it has to secure the support of the people and the clerics, writes Karim Sadjadpour

​​ This month marks the one-year anniversary of the contested re-election of hard-line Iranian President Mahmoud Ahmadinejad, which spurred the country's largest popular uprisings since the 1979 Islamic revolution. While the regime gradually succeeded in violently quelling the momentum of the opposition Green Movement, the country's deep internal rifts – both among political elites as well as between government and society – are far from being reconciled.

Among the numerous post-election casualties was the notion of Iran as an "Islamic Republic." As the late Grand Ayatollah Ali Montazeri put it, the regime's brutality towards its own people has rendered it "neither Islamic nor a Republic."

Another casualty was the legitimacy of Supreme Leader Ayatollah Ali Khamenei. For two decades, Khamenei deceptively cultivated an image of an impartial and magnanimous guide, but his defiant public support for Ahmadinejad exposed him as a petty, partisan autocrat. Among the unprecedented slogans of last summer's street protests were thunderous chants of "Khamenei is a murderer, his leadership is void!"

Under political pressure: seven months after the presidential election and after being the targeted by armed supporters of the regime on a number of occasions, Mehdi Karroubi had to accept the re-election of Ahmadinejad

Despite the government's crisis of legitimacy and endemic mismanagement, the Green Movement – nominally led by opposition presidential candidates Mir Hossein Mousavi and Mehdi Karroubi – faces major obstacles. Their brain trust is either in prison, under virtual house arrest, or unable to communicate freely. They lack organization and strategy.

As protests began last year, the grass-roots nature of the Green Movement was initially thought to be advantageous, given that it could not be easily decapitated. "Thirty years ago people were sheep and Khomeini was their shepherd," a prominent Iranian democratic activist told me. "Today we don't have a shepherd, but the people are no longer sheep."

Despite their strength in numbers however, Mousavi and Karroubi's excessive reliance on street protests is misguided. While their courageous supporters espouse tolerance and practice non-violence, they are overwhelmed by armed government forces who are willing to kill and die to retain power. 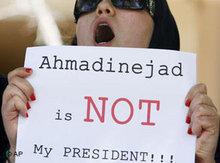 Outcry against despotism: the re-election of President Ahmadinejad in June 2009 triggered the most vehement unrest in Iran since the Islamic Revolution 30 years ago

​​ If the Green Movement is to mount a serious challenge to the government it must incorporate support from bazaar merchants, workers in major industries, transportation unions, and government workers. Sustained strikes by these groups would bring the country's economy to a halt. This is a tall order, however, given that Iran's labor groups, while deeply discontented, are just as amorphous as the Green Movement itself.

What's more, Mousavi and Karroubi, perhaps chastened in part by the unfulfilled promises and excesses of the Islamic Revolution, are seemingly in no hurry to see abrupt change. Instead, they have pursued a gradualist approach that aims to co-opt and recruit disaffected members of the traditional classes, including clergy and Revolutionary Guardsmen, to the Green Movement.

Iran needs the US as an adversary

The Green Movement's deliberate approach is complicated by the sense of urgency that the United States, Europe, and especially Israel, feel about the Iranian government's nuclear ambitions. While the role that outside powers like the US can play in affecting political reform in Iran is limited, the Obama administration faces two fundamental challenges in its Iran policy. 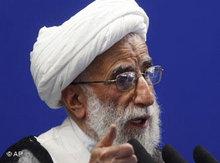 Strategy of polarization: "Anti-Americanism is among the main features of our Islamic state," says Ayatollah Ahmad Jannati

​​ First, how do you reach an accommodation with a regime that seemingly needs you as an adversary? While a large majority of Iranians want to make amends with the US, for Iran's hardliners, enmity toward the US has become a central part of the Islamic Republic's identity. "If pro-American tendencies come to power in Iran, we have to say goodbye to everything," conceded Ayatollah Ahmad Jannati, head of the powerful Guardian Council. "After all, anti-Americanism is among the main features of our Islamic state."

The second challenge for the US is to champion human rights and democracy in Iran without compromising the independence of opposition forces. Given the diversity of the Green Movement, there is no clear consensus as to which US policies are most constructive. There is a seemingly universal belief that America should absolutely refrain from military action, condemn the Islamic Republic's human rights abuses, and express moral solidarity with the Iranian people. There is little agreement, however, when it comes to more contentious questions, such as the potential efficacy of targeted sanctions.

The real leader of the revolution 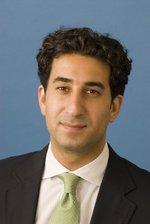 If the Green Movement is to mount a serious challenge to the government it must incorporate support from the traditional populace, says Karim Sadjadpour

​​ Iran's first post-revolution prime minister, Mehdi Bazargan, reportedly once said that the real leader of the 1979 revolution was not Ayatollah Khomeini but rather the Shah, who united diverse groups of people against him. Today, a somewhat similar dynamic exists: the two individuals arguably most responsible for the opposition's resilience are not Mousavi and Karroubi, but Ahmadinejad and Khamenei.

Governmental brutality and intimidation can withstand the march of history for years, but not indefinitely. Whatever becomes of the Green Movement in the short term, millions of courageous Iranian protestors made clear to the world last summer that their country's centennial quest for a democracy is an idea whose time has come.

Interview with Karim Sadjadpour
"The Iranian Regime Is Now More Vulnerable Than Ever Before"
Karim Sadjadpour is an Iran expert and associate at the Carnegie Endowment for International Peace. Birgit Kaspar has talked to him about the situation in Iran and perspectives in the nuclear crisis with the West

On the Death of Hossein Ali Montazeri
From Revolutionary to Reformer
Grand Ayatollah Montazeri was regarded as the spiritual authority behind the "green movement" in Iran. And yet the erstwhile friend of Khomeini once played a major role as architect of the Islamic Republic. His metamorphosis from revolutionary to reformer is exemplary for the evolution of Iran's opposition. By Urs Sartowicz