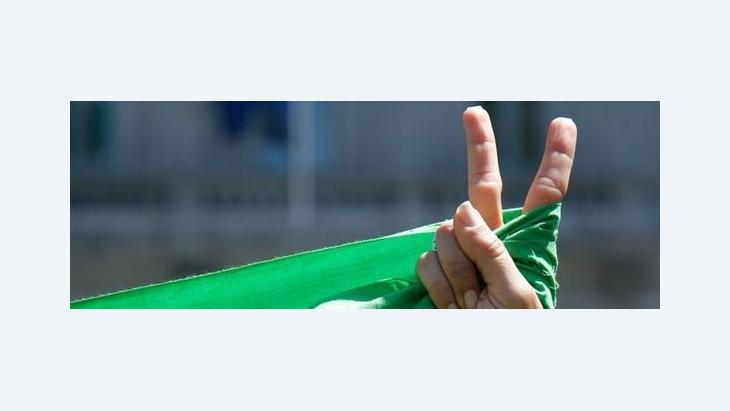 Simmering beneath the Surface

While Iran's revolutionary leader Ali Khamenei reinterpreted the toppling of the Mubarak regime as an Islamic rebellion, the protagonists in the Green Movement of 2009 looked to Cairo in frustration. Some of them may well have asked themselves the question: Why was there no Tahrir Square phenomenon in Tehran? By Marian Brehmer

Back then, all eyes were on Tehran. On 29 June 2009, in the midst of the "green" protest summer in Iran, Egyptian opposition activists wanted to show their solidarity with the demonstrators in Iran on the streets of downtown Cairo. But no sooner had the crowds begun to gather, the rally was quickly broken up by a barrage of security personnel.

There had also been plans last Monday in Cairo to honour Neda Agha-Soltan, shot on 20 June at an election protest rally in Tehran. Neda had not only become a symbol of the Iranian protest movement, she was also an inspiration for disaffected youngsters in Cairo. 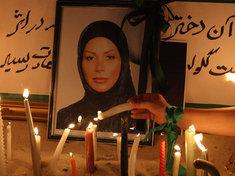 Iconic status for the Green Movement in Iran – and for the protestors of the Arab Spring: The 26-year-old student Neda Agha Soltan was shot dead in Tehran in June 2009

​​No one could have guessed how the tide would turn. On a Monday more than one-and-a-half years later, on 14 February 2011, thousands of people took to the streets of Tehran again for the first time since 2009. Now they were looking to Cairo, where Hosni Mubarak had resigned his post three days earlier, and wanted to demonstrate their solidarity with young Egyptians.

Iran's reformist leaders Mousavi and Karroubi had declared a "day of anger", inspired by the events on Tahrir Square. They were placed under house arrest to prevent them from taking part in the protests. Proceedings were kept under control by a massive police presence, and at a subsequent rally on 20 February, the number of police officers and Basij militia even exceeded the number of demonstrators on some Tehran squares.

Iran's Green Movement represented a pioneer among the new democratic movements that have now toppled Ben Ali and Mubarak, and which are sawing away at the thrones of Gaddhafi, Saleh and Assad. The Green Movement enjoyed large-scale support, and it was unpredictable and spontaneous in its dynamic, carried by young people and with social media as its catalyst.

Its greatest success was not only the unparalleled, rapid politicisation of millions of young people, but also how it changed in the way western observers perceived Iran. But the power base of the Islamic Republic could not be overthrown.

In Iran, it all began with the assumed electoral fraud of President Mahmud Ahmadinejad. The Iranians' only democratic instrument, voting in elections, had become a farce in the eyes of many. Dozens of people were shot dead in June two years ago, and thousands detained to be interrogated and tortured during the months that followed. 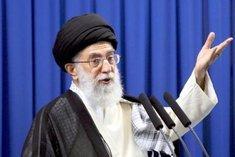 The protest adopts a new tone: On 27 December 2009, demonstrators for the first time openly express their displeasure at Ali Khamenei, denouncing him as a "dictator"

​​The resistance movement diminished, and was reignited following the death of the reformist Grand Ayatollah Hossein Ali Montazeri in December.

On the Shiite Day of Ashura, on 27 December 2009, protests were for the first time openly aimed at the supreme spiritual leader Ali Khamenei, whom demonstrators publicly denounced as a "dictator".

Iranian political scientist Peyman Jafari believes this radicalisation explains why the protests died down. The year 2010 was for the most part peaceful, and the government confidently declared that the Green Movement was dead.

Fundamental political and social freedoms have moved to the fore

The protests that took place in February this year have shown two things. Firstly, that the Green Movement is not dead, it has at most been undermined. And secondly, while the elections were previously the dominant issue, now more fundamental political and social freedoms have moved to the fore – just as they were being demanded in Egypt.

While Ali Khamenei welcomed the Egyptian uprising and reinterpreted it as an Islamic rebellion, the protagonists of 2009 looked to Cairo in frustration. Some of them may well have asked themselves the question: Why didn't we spend the night on the squares? Why was there no Tahrir Square phenomenon in Tehran? 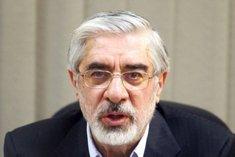 In permanent conflict with the leadership of the Islamic Republic: Mir Hossein Mussawi, leading figure of the Green Movement wants regime change, but no revolution

​​The political systems of Egypt and Iran are entirely different. In Cairo there was the almighty leader Mubarak and his power structure, in Tehran the complicated network of revolutionary leader, President, the Council of Guardians and the Revolutionary Guard.

The role of the armed forces also makes a significant difference: In Egypt, the military aligned itself with the demonstrators. In Iran, it was the professionally organised and indoctrinated Basij militia that is loyal to the system and fired shots at the protest rallies.

The Basij are mostly recruited from socially more deprived areas and placed by the government at universities as a way of detecting any resistance at an early stage. This is because in Iran, the roots of resistance can always be traced back to academic centres of learning, whether in 1979 or during the democratic revolution of Mossadegh in the year 1953. On the night of 14/15 June 2009, Basij militia stormed the dormitories of Tehran University, killing and seriously injuring several students.

What is the movement lacking?

But the nature of the regime, its repressive methods and the fear that it inspires among activists are not the only reasons why the Green Movement evidently lacked clout.

Ramin Jahanbegloo, a political scientist in Canadian exile and one of the most influential voices of the Iranian Diaspora, sees strength in the "post-charismatic" and "post-ideological" character of the movement. But this can also be perceived as a weakness: does the Green Movement lack a clear direction as well as individuals to provide this guidance? 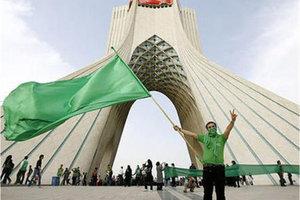 Is an "Iranian Tahrir" possible? In the medium and long term, it appears to be impossible to suppress the spirit roused in Iran in 2009, writes Brehmer

​​In June 2010, Mousavi published the "Green Charta". In it, he stated that the aims of the movement are not to dispense with the system, but to reform it in consideration of the democratic elements anchored in the Iranian constitution.

But is this what the activists of 2009 want? It is imperative to register the various different interests within this pluralist movement and involve all parties in the hammering out of an action plan.

Following the presidential poll, the leadership responded to the reformers thus: Yes, you won the elections in Tehran, but Tehran is not Iran. Rulers remained silent over the fact that many pro-reformist votes were cast in other cities such as Isfahan and Shiraz.

In two large provinces, the number of ballots counted exceeded the number of people registered to vote, and according to results published by the government, 44 percent of previously reformist voters voted for Ahmadinejad (figures calculated by the London-based think tank Chatham House). All this suggests that Ahmadinejad's support basis cannot be as large as the official election result tries to portray it.

But there is a spark of truth in the regime's reaction: Tehran really is not Iran. Western media are fond of focusing their attentions on the modern, English-speaking inhabitants of northern Tehran. It's an easy image to peddle: People in Iran wear the same clothes as we do, they listen to the same music, and now they want the same rights as we have. 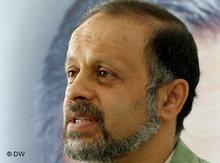 ​​But there are also the conservative sections of society and the provinces – even though Iran is a highly urbanised country. Up to now, the protest movement has not associated itself with striking bazaar traders, and far fewer workers and farmers have joined the movement than members of the middle classes, intellectuals, students and artists.

The movement can gain in strength and momentum if it broadens its appeal to wider sections of society. It must also seek closer allegiances with reform-orientated clerics, and include more economic demands on its policy agenda.

On the other hand, in an article recently published by the BBC Farsi service, the sociologist and well-known critic of the Iranian regime Akbar Ganji pointed out that growing unemployment and poverty have not resulted in an uprising, but that in actual fact concepts such as democracy and freedom have come to be regarded as "luxuries", of secondary concern in the daily battle for survival. Ganji also said that economic sanctions imposed on Iran by Europe and the US have actually exacerbated social conditions in the country.

There are a high number of educated Iranian thinkers in exile, such as Jahanbegloo and Ganji. These individuals remain an important source of ideas for the Green Movement. But they can only provide impulses.

Events in Egypt have shown that blogs can play a decisive role in the mobilisation of disparate opposition forces. But they have also shown that the key battles must take place on the streets. If the movement is to be a success, it needs staying power and clear strategies to organise itself and put up effective resistance – for example though civil disobedience, an "Iranian Tahrir".

In the medium and long-term it is impossible to suppress the spirit that was roused in Iran in 2009. If the protest regains its momentum, this time Egyptians in Cairo will be free to demonstrate their solidarity with the Iranians.

Marian Brehmer is a freelance journalist based in Germany. He has extensively travelled in Turkey, Iran, Iraq, Pakistan, and India.

Translated from German by Nina Coon

Iran is far more modern than many people realise: our view is clouded by media distortion and the overriding political narrative. The nation’s historic and cultural riches are ... END_OF_DOCUMENT_TOKEN_TO_BE_REPLACED

Saudi Arabia and its allies have agreed to set aside their differences with Qatar at a summit meeting of the Gulf Cooperation Council. The restoration of diplomatic relations ... END_OF_DOCUMENT_TOKEN_TO_BE_REPLACED

In an act of subversive diplomacy, Israeli singer and actress Liraz Charhi has recorded her latest album in secret collaboration with Iranian artists. By Carl Holm END_OF_DOCUMENT_TOKEN_TO_BE_REPLACED

In August 1978, four men set fire to the Cinema Rex in the Iranian city of Abadan, killing more than four hundred people inside. The event is said to have started the Iranian ... END_OF_DOCUMENT_TOKEN_TO_BE_REPLACED

Many in the West equate Middle Eastern music with the folklore of "A Thousand and One Nights". Tayfun Guttstadt demonstrates just how erroneous this is END_OF_DOCUMENT_TOKEN_TO_BE_REPLACED

END_OF_DOCUMENT_TOKEN_TO_BE_REPLACED
Social media
and networks
Subscribe to our
newsletter