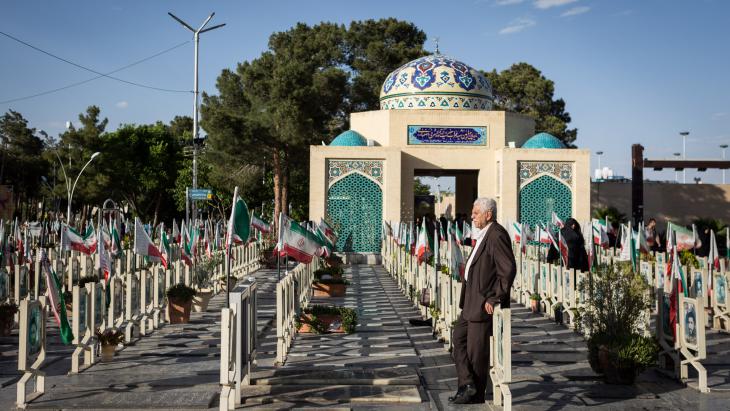 Iran has many museums dedicated to its rich history. Nevertheless, those places that focus on events during which Iranians and other prominent 'Defenders of Islam' lost their lives, enjoy special status. By Philipp Breu

It all begins with butterflies. 'Hall of the butterflies' is the name of the first room that visitors enter in Iran's largest, state-run war museum in the capital, Tehran. In the Islamic Republic, the eight-year war between Iran and its neighbour Iraq is known as the 'Holy Defence'. It is also the name given not only to the largest, but to each and every war museum in the country.

So why does the largest and most expensive museum in Iran call its first room after butterflies? ″Butterflies love the light. They are so attracted to the light of a candle that they get burned. They burn in the fire for love of the light,″ says Mr Solgi, one of the English-speaking guides for foreign visitors to the museum. In short, the butterflies are a romanticised metaphor for the deaths of over half a million people – the martyrs – who gave their often all-too-young lives for the nascent Islamic Republic.

The huge number of people killed or injured in the fight against Saddam Hussein's troops is the foundation on which Iranian identity and the country′s historical self-image rests. Honouring martyrs has been an integral part of Shia Islam since the Battle of Karbala on 10 October 680 in which Imam Hussein and 72 of his followers were killed. 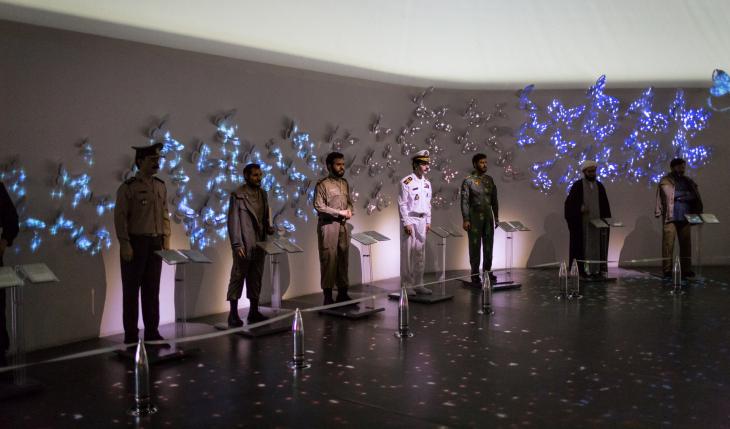 Romanticising the deaths of over half a million people: "Butterflies love the light. They are so attracted to the light of a candle that they get burned. They burn in the fire for love of the light,″ says Mr Solgi, one of the English-speaking guides in Iran's largest, state-run war museum in Tehran

From the outset of the Iran-Iraq War in September 1980, however, and in a bid to bolster the government′s image, the new Iranian leadership under Imam Khomeini was to take the instrumentalisation of political events to new heights.

The official response to an attack on the Iran Islamic Republic Party on 28 June 1981 is a case in point. War had been raging for almost a year. The bomb detonated that day killed over 70 people, including Ayatollah Mohammad Beheshti, who at the time was the second-most senior leader in the country after Ayatollah Khomeini. Ali Khamenei, the current revolutionary leader, was also present at the time of the attack. He was partially paralysed in the blast and has not been able to move his right arm since. Shortly after the attack, the official number of victims was magically fixed at 72, irrevocably linking this modern-day event to the Battle of Karbala.

Mourad al-Marouai was just nine when a landmine killed him on a beach in war-torn Yemen, a tragedy that will haunt his family forever. After a swim, the little boy "suddenly ... END_OF_DOCUMENT_TOKEN_TO_BE_REPLACED

This year’s Morgenland Festival opened with the premiere of Kinan Azmeh’s musical theatre piece, “Songs for Days to Come”, based on fifteen poems by contemporary Syrian poets. ... END_OF_DOCUMENT_TOKEN_TO_BE_REPLACED

Rumi's poems, though generally stripped of their Islamic symbolism, are hugely popular around the world. Yet Islamic mysticism is still very much at the heart of these verses. ... END_OF_DOCUMENT_TOKEN_TO_BE_REPLACED

The Ukraine war is changing the global geopolitical landscape. Ali Khamenei, Iran's most powerful man, is already cosying up to Russia in anticipation of a harsh post-war reality ... END_OF_DOCUMENT_TOKEN_TO_BE_REPLACED

Analyst Iyad El-Baghdadi examines the ongoing tensions between the United States and the two Gulf states – Saudi Arabia and the UAE – and their geopolitical implications in ... END_OF_DOCUMENT_TOKEN_TO_BE_REPLACED

The Ukraine war has seen energy prices spike with oil producers in the Middle East making more money than ever. But will it put the brakes on long-planned reforms to diversify oil ... END_OF_DOCUMENT_TOKEN_TO_BE_REPLACED
Author:
Philipp Breu
Date:
Mail:
Send via mail

END_OF_DOCUMENT_TOKEN_TO_BE_REPLACED
Social media
and networks
Subscribe to our
newsletter