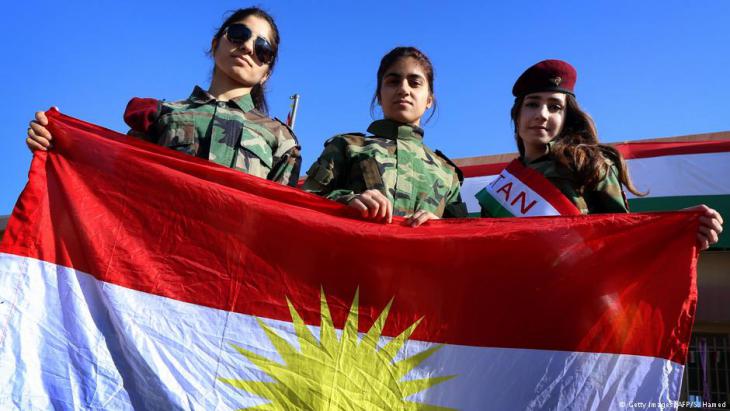 Iraq
Kurdish referendum for political relevance: Papering over the cracks

The planned independence referendum for the Iraqi region of Kurdistan, argues Denise Natali, not only reflects ongoing tension with Baghdad, but also intra-Kurdish political rivalries that could trigger further conflict

The Iraqi Kurds′ independence referendum, planned for 25 September, reflects unresolved disputes over political authority between Baghdad and Erbil. It is embedded in the ″right to self-determination″ and a salient sense of Kurdish nationalism that has deepened since the campaign against Islamic State (IS). Even if the referendum is non-binding, the Kurdistan Regional Government (KRG) will attempt to use the results to leverage the Iraqi government.

One priority is to capitalise on Kurdish territorial gains and enhance KRG influence in the disputed territories, particularly Kirkuk and the Nineveh Plains. This effort requires convincing local communities – Kurds and non-Kurds – that their future will be more promising under the KRG and not Baghdad.

Yet Kurdish self-determination – which may include the referendum exercise – is not only a contestation between Erbil and Baghdad, but among Kurdish factions as well. The first dynamic involves what the Kurds can gain from the Iraqi state. The second is about Kurdish factions′ competition for power, revenue and resources.

Intra-Kurdish competition has increased since the anti-IS campaign began and while the dominant Kurdistan Democratic Party (KDP) led by Masoud Barzani is challenged by the Kurdistan Workers′ Party (PKK) and its affiliates, as well as other Iraqi Kurdish groups. The key post-referendum issue is not whether a ″yes″ vote will alter official Iraqi borders or the status quo, but rather how Kurdish parties′ competition for political relevance can incite conflict among Kurds or other sub-state groups.

The Middle East's largest stateless minority: "governments and institutions may affirm the Kurds′ right to self-determination, like all peoples of the world and recognise the significant contributions that the Kurdish peshmerga have made to the fight against Islamic State. Yet they remain committed to Iraq′s territorial integrity and state sovereignty," writes Natali

Most astute observers, as well as Kurdish officials, know that the referendum will not lead to independence. Despite an intense lobbying campaign in Washington, DC and Europe, the KRG has failed to gain key regional and international actors′ official support for the referendum or Kurdish secession.

Governments and institutions may affirm the Kurds′ right to self-determination, like all peoples of the world and recognise the significant contributions that the Kurdish peshmerga have made to the fight against Islamic State. Yet they remain committed to Iraq′s territorial integrity and state sovereignty. Even the U.S. Congress – where Iraqi Kurds enjoy important influence – has conditioned future military support to the Kurdish peshmerga on the KRG remaining part of the Iraqi state.

A unilateral referendum lacking Iraqi and international support is unlikely to alter the status quo in Iraq. Even if the KRG secures a majority ″yes″ vote in the disputed territories, it will remain a de facto authority without official recognition or increased financial support from Baghdad. The absence of a negotiated settlement between the KRG and Baghdad approved by the Iraqi parliament, will also leave KRG claims to oil exports and revenues subject to the same legal and political constraints as they are today.

Dalia Hatuqa is an experienced journalist who has reported on the Israeli-Palestinian conflict from Ramallah, Washington DC and Amman. A writer for Time Magazine, Foreign Affairs ... END_OF_DOCUMENT_TOKEN_TO_BE_REPLACED

Since President Abdul Fattah al-Sisi seized power in Egypt in 2013, he has ruled the country with an iron fist. Civil society, opposition and free press struggle to survive. Tens ... END_OF_DOCUMENT_TOKEN_TO_BE_REPLACED

Very different Western reactions to the suffering in Ukraine and the Arab world show that there is a profound rift among cultures. Essay by Michael Young END_OF_DOCUMENT_TOKEN_TO_BE_REPLACED

Many Turks are dissatisfied with the international status of their country. At the same time, opinion polls reveal great scepticism among the Turkish population towards the USA. ... END_OF_DOCUMENT_TOKEN_TO_BE_REPLACED

Since Spain abandoned its traditional neutrality towards the conflict in Western Sahara, Morocco has announced a "new phase" in relations between the two countries. But what is ... END_OF_DOCUMENT_TOKEN_TO_BE_REPLACED
Author:
Denise Natali
Date:
Mail:
Send via mail

END_OF_DOCUMENT_TOKEN_TO_BE_REPLACED
Social media
and networks
Subscribe to our
newsletter