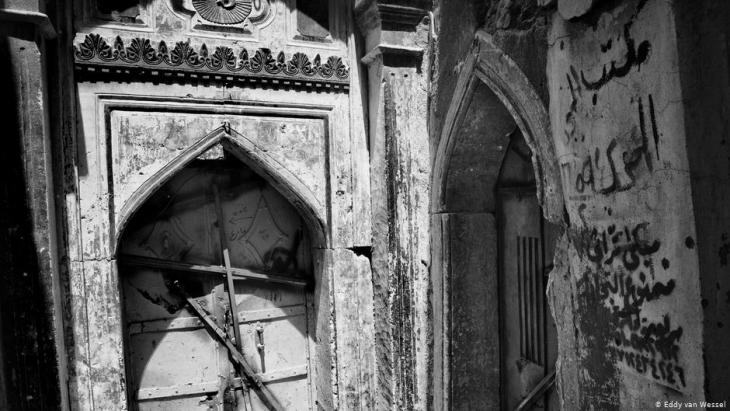 Mosul's Jewish quarter miraculously survived three years of occupation by the Islamic State terror group and the battle to evict it. Judit Neurink and Eddy van Wessel went there to find out how

When the Islamic militants of IS were finally routed from the city, most of western Mosul was left in ruins. But not the Jewish quarter. Here too, people are working to restore their houses. However, these are mostly still standing and mainly need repairs and a coat of paint to erase the traces of three years of occupation. While most residents fled the battle to free their neighbourhoods of IS, they are now back.

Seventy-two-year-old Imad Fetah, who stands in front of his freshly painted gate, wearing a spotless white dishdasha, a scarf draped over his head, never left.

As he recounts the events of the years of occupation, he points to the blackened remains of a building across the narrow street. The fire was started by IS, he says, after the inhabitants had been ordered to leave. The house, which was built around a covered courtyard in the traditional Mosul style, is badly damaged but can still be restored.

When people realised what IS intended to do to their homes, they started refusing to leave. Fetah stayed put, too. "Daesh destroys old things," he says sadly, using the local name for IS. It wasn't only this neighbourhood – every monument that did not fit with their strict version of Islam had to go: statues of poets and writers, Sufi places of worship, libraries with unique book collections.

Tunnels in the Jewish quarter

The Islamic militants would only tolerate the things they had a use for, Fetah states. "Like the tunnels in our quarter which the Jews had dug." The tunnels were built to give the residents an escape route in case of danger. Until the IS takeover, they were likely last used when anti-Jewish riots erupted after the declaration of the state of Israel in 1948.

Back then most Iraqi Jews fled the country and their neighbourhoods emptied. Their houses were popular because of the high quality of their construction. But many were neglected in the ensuing years and the areas gradually became slums. 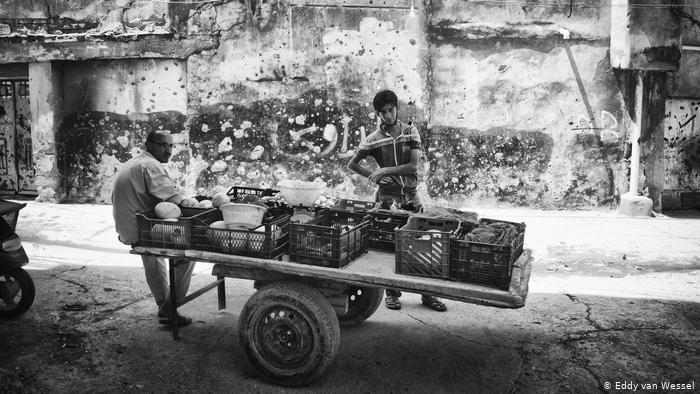 Facing a new threat: though house prices have fallen by 50 percent, owners are being forced to sell their homes for lack of money in the aftermath of IS rule. The ruined synagogue, which is arguably state property, and therefore shouldnʹt be up for sale, has been put on the market at $2 million. How to protect the quarter against speculators merely interested in re-development remains the question

Still, says Imad Fetah, he has lived here happily for many years. All his neighbours are aware of the local Jewish history and they are even proud to live here. In the small supermarket that has re-opened in the nearby bazaar street, 62-year-old Younis Abdullah confirms this. "My parents bought our home in 1948 from a Jewish family. My 90-year-old mother fondly recounts how she liked our Jewish neighbors and misses them."

In Mosul Jews are mainly remembered as 'good neighbours', says Faisal Jeber, director of the Gilgamesh Center for Antiquities and Heritage Protection, while walking through the Jewish quarter. "The negative sentiments all concern the state of Israel."

Home
Print
Newsletter
More on this topic
Islamic State′s destruction of Mosul: Razed to the ground "Baghdad, yesterday - The making of an Arab Jew": A multi-cultural and multi-ethnic societyTraces of Jewish life in Iraq
Related Topics
'Islamic State' | IS, Dialogue of Cultures | Intercultural Dialogue, Dialogue of Religions, History of the Near and Middle East, Iraq War, Jews in the Islamic world
All Topics

The "maqama", a classical Arabic form of prose-poetry, is still almost unknown in Germany – as is the name of the 11th-century Baghdad poet Ibn Naqiya. A new translation has the ... END_OF_DOCUMENT_TOKEN_TO_BE_REPLACED

Two and a half years since its liberation from the Islamic State group, large areas of Mosul still lie in rubble. Germany is contributing in a variety of ways to the ... END_OF_DOCUMENT_TOKEN_TO_BE_REPLACED

The assassination of the Iranian general Qassem Soleimani in a surprise U.S. drone strike is being used by the Islamic Republic of Iran to political ends, says Iranian journalist ... END_OF_DOCUMENT_TOKEN_TO_BE_REPLACED

The upheavals of the past year in the MENA region are arguably as momentous as those of the Arab Spring in 2011. Yet perhaps the biggest difference is that our interest seems to ... END_OF_DOCUMENT_TOKEN_TO_BE_REPLACED

For 12 years, Nihad Salim Qoja was the mayor of Erbil, capital of the autonomous Kurdish regions of Iraq. Christopher Resch spoke to the local politician in Erbil about the future ... END_OF_DOCUMENT_TOKEN_TO_BE_REPLACED

Trump’s sweet revenge could swiftly turn bitter, after all the U.S. attack is a direct declaration of war against the Iranian Revolutionary Guard and its elite Quds troops ... END_OF_DOCUMENT_TOKEN_TO_BE_REPLACED
Author:
Judit Neurink & Eddy van Wessel
Date:
Mail:
Send via mail