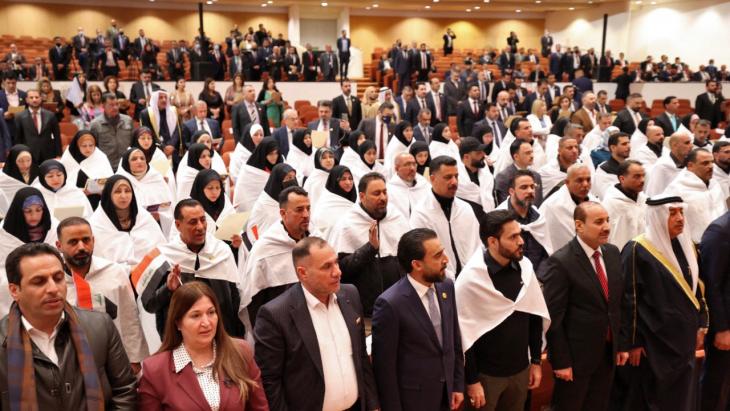 In multi-confessional and multi-ethnic Iraq, the formation of governments has involved complex negotiations ever since the 2003 U.S.-led invasion toppled dictator Saddam Hussein.

Parliament only met for the first time since the October 10 vote on Sunday, after Iraq's top court rejected a complaint of electoral irregularities filed by the Shia and pro-Iran Hashed al-Shaabi, a former paramilitary alliance.

Political analysts warn there are still several hard steps ahead before the formation of a new government.

Iraq is trying to emerge from almost two decades of conflict but is mired in corruption, economic crisis and with threats of violence lingering.

What sparked anger at opening?

The newly-elected members of parliament met for a swearing-in ceremony and to elect their speaker, but debate soon turned ugly.

Iraq's post-election period has been marred by high tensions, violence and allegations of vote fraud.

One of parliament's first tasks must be to elect the country's president, who will then name a prime minister tasked with forming a new government.

Shia cleric Muqtada al-Sadr, who once led an anti-U.S. militia and who opposes all foreign interference, has repeatedly said that the next prime minister will be chosen by his movement.

It won the largest share with 73 out of the assembly's 329 seats, more than a fifth of the total.

But the Coordination Framework, including pro-Iran groups such as the Fatah (Conquest) Alliance, the political arm of the pro-Tehran Hashed al-Shaabi, insist their coalition is bigger.

The Coordination Framework claimed they can muster the backing of 88 lawmakers to make them the largest bloc.

That prompted fury from Sadr's movement. In the ensuing chaos, MP Mahmud al-Mashhadani, the oldest member of parliament who was therefore chairing the opening session, was taken ill.

One lawmaker alleged Mashhadani was "attacked", state media said he fainted, and he was rushed to hospital where he was reportedly in a stable condition.

Who will be the next PM?

No single party holds an outright majority, so the next leader will be voted in by whichever coalition can negotiate allies to become the biggest bloc.

In previous parliaments, parties from Iraq's Shia majority have struck compromise deals to work together and form a government.

But Sadr has hinted he prefers an alliance with Sunni groups including Taqadom as well as the Kurdistan Democratic Party (KDP).

"In theory, they could push through and have their president elected and their prime minister designated," said political scientist Hamza Haddad.

One leader in the Shia Coordination Framework, speaking on condition of anonymity, admitted that if Sadr presses ahead with a coalition including Sunni parties and the KDP, they will be able to choose the government.

However, if Sadr works with Shia parties as in past parliaments, then the Coordination Framework "will have the upper hand", the leader added.

If the Coordination Framework had a choice, a leading contender would be ex-prime minister Nuri al-Maliki, a figure close to Iran whose own group won 33 seats.

Maliki would be unthinkable for Sadrists.

They, however, have not put forward any name to replace current Prime Minister Mustafa al-Kadhimi, who has not clearly said whether he wants to remain in power.

Khadimi, a former intelligence chief, is Shia like all his predecessors. He was confirmed in the last parliament by a coalition of Shia-majority lawmakers.

What are the risks of conflict?

"As long as the two Shia sides remain divided, that could lead to more violence," the political analyst Haddad said.

There has already been unrest following the election.

Kadhimi escaped unhurt when an explosive-packed drone hit the prime minister's residence in November during what his office called an "assassination attempt."

No group has claimed the attack.

"It is difficult to see either side quietly allowing the other to lead a government formation without the other," Haddad added, noting that both Sadr and the Conquest Alliance have armed backers.

END_OF_DOCUMENT_TOKEN_TO_BE_REPLACED
Social media
and networks
Subscribe to our
newsletter