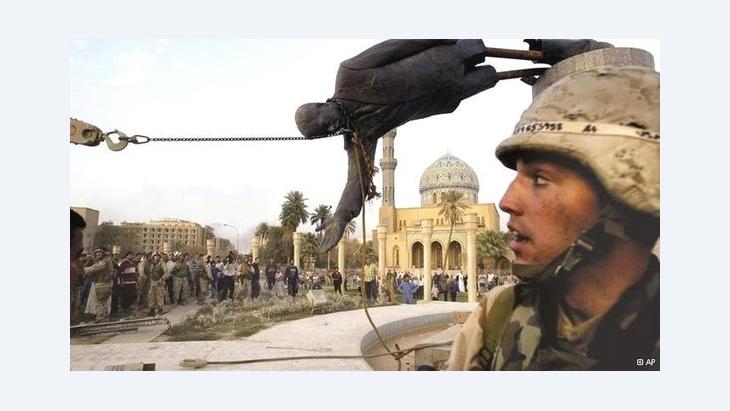 Iraq Ten Years after the Fall of Saddam Hussein
Invasion or Liberation?

﻿Saddam Hussein's reign came to an end ten years ago. Iraq lost a brutal dictator, but found itself faced with new problems – a decade later, Iraqis have a mixed reaction to the US-led invasion. Birgit Svensson reports

﻿The plinth at al-Firdous Square in Baghdad is now not much more than a concrete stump. It has been bare ever since the bronze statue of Saddam Hussein was hauled from it on April 9, 2003, symbolically ending the president's reign.

For a while a tiny, surreal sculpture by a well-know Iraqi artist took over the space, but it was heavily criticized by locals and quickly removed when insurgents bombed the square. Now it seems as though the plinth is likely to remain empty as long as Iraqis can't agree on whether the arrival of western troops that year was an invasion, a liberation, or an occupation.

"For me the invasion was well-intentioned," says Amal Ibrahim. "But it was definitely an invasion." The 43-year-old Shiite mother of four has certainly benefited from the changes that the events of 2003 ushered in. After her father, a doctor, was murdered by Saddam's henchmen for his opposition to the regime, Ibrahim was left with little chance of advancing her career. Now she holds an important civil service position in the country's legislature. 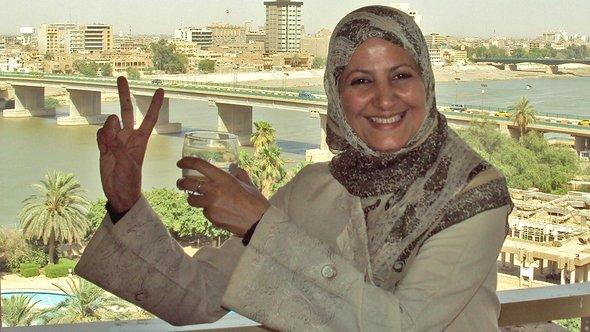 Ambiguous view of the US-led invasion: Amal Ibrahim does not see the US-led "Operation Iraqi Freedom" as a liberation. Instead, she says the invasion should be judged on its results: "A liberation would look different to me"

​​Nevertheless she does not see the US-led "Operation Iraqi Freedom" as a liberation. Instead, she says the invasion should be judged on its results: "A liberation would look different to me."

Amal Ibrahim sees the origin of the current problems in the directives and laws that US administrator Paul Bremer imposed during the occupation. One of his acts, the appointment of the first interim government, served to alienate the political class from the people by handing out generous salaries and other privileges to the politicians.

According to Ibrahim, that made them change their priorities, and they ended up serving their own interests before those of the country. "I don't know if that was intentional or if that's just how it developed." In any case, the country is now in a state of permanent political crisis since the withdrawal of the last US soldiers at the end of 2011.

Iraq has been through terrible times: a vicious dictatorship that stretched across three decades, three wars, countless revolts, plus a trade embargo that lasted nearly ten years and brought the country to its knees. 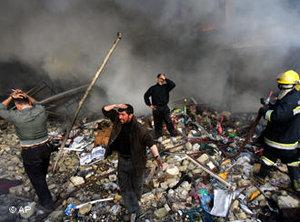 At the peak of the violence between 2006 and 2009, up to 3,000 Iraqis were being killed every month, according to UN estimates. Pictured: Iraqis grieve amid the rubble after a double car bomb attack in Baghdad, on 12 February 2007

At the peak of the violence, up to 3,000 Iraqis were being killed every month, according to United Nations estimates. Murder and displacement have sorted Sunnis and Shiites into sharply segregated communities. Countless people have moved homes within Baghdad. Previously mixed districts were separated along ethnic and religious lines before the fighting eventually ebbed and the terrorist attacks stopped.

When Ibrahim leaves Baghdad's heavily protected government district, the "Green Zone", she never knows how long her journey home will take. She has to cross the bridge over the Tigris river to get to Palestine Street, a trip that sometimes takes just a few minutes, sometimes more than an hour.

Although many checkpoints have been dismantled in the past two years, the uncertain security situation has resulted in the creation of so-called "rolling checkpoints", where cars are stopped and searched at random. It's a symptom of how nervous the state authorities currently are.

Prime Minister Nuri al-Maliki, who also runs the defence and interior ministries, is under pressure from several fronts. No one seems to want to govern with him – new resignations come almost daily, and his government appears to be falling apart. In the meantime al-Qaeda has raised its head again, launching coordinated attacks alongside the insurgency's umbrella organization Islamic State of Iraq, whose members represent at least a dozen extremist groups. Some commentators are already talking about the danger of another civil war. 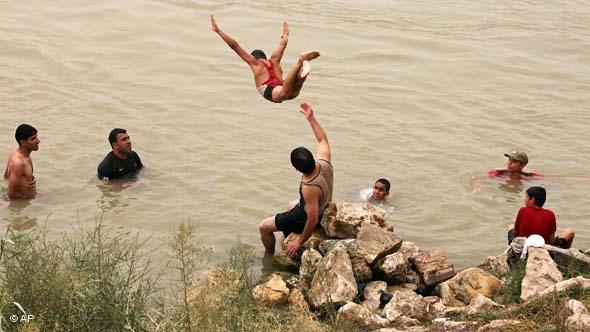 New opportunities, despite political disarray: according to a survey, albeit an unofficial one, most Iraqis under 25 see the invasion of US and British troops as a liberation. Pictured: Iraqi youths in the Tigris river

​​Local elections are to be held in Baghdad, as well as in 13 other provinces, on April 20 and the city has been named this year's cultural capital of the Islamic world – all ideal opportunities for terrorists to draw attention to their causes.

The six million Baghdad residents have taken all this in their stride. They have learned to accept traffic gridlocks, and now often cross the Tigris bridges on foot, while in the early years of the insurgency the streets would often be empty as people stayed at home fearing for their lives.

Now, until late in the night, crowds bustle through districts like Karrada, the district which includes al-Firdous Square, and families can be seen wandering along Abu Nawas Street, which lines the river. Theatres and concerts are regularly full and restaurants no longer complain of a lack of diners either.

"Yes," said Ibrahim. "You can get used to the terrorism, or at least learn to work around it." She also knows from her 22-year-old son that young Iraqis are enjoying their new freedoms more than they worry about the lack of security.

"Young people today have completely new opportunities to realize their potential," she said, pointing out how the Internet has provided a new window to the world, while under Saddam even satellite dishes for televisions were banned. "Now you can say what you want and meet who you want," says Ibrahim, while more and more people can now afford to travel. One unofficial survey found that most Iraqis under 25 do indeed see the invasion of US and British troops as a liberation.

Home
Print
Newsletter
More on this topic
Marching against al-Maliki: Has the Arab Spring Arrived in Iraq?Persecuted Emos in Iraq: No Place for EmotionsInterview with Kifah Al-Jawahiri: ''Iraq's Political Crisis Is Massive''
Related Topics
Democracy and civil society, Iraq War, U.S. policy in the Middle East
All Topics

A French artist has used photos of torture from Abu Ghraib for an oversized artwork at the Berlin Biennale. Reactions from fellow artists have been mixed, with some criticising ... END_OF_DOCUMENT_TOKEN_TO_BE_REPLACED

Since Ali Khamenei, Iran's most powerful man, has openly and unconditionally come out in support of Putin's war in Ukraine, logistical help is on its way, with an allegedly ... END_OF_DOCUMENT_TOKEN_TO_BE_REPLACED

Internet giant Google is creating a "cloud region" in Saudi Arabia. It says it will protect users there. But digital rights activists say the firm will be putting the lives of ... END_OF_DOCUMENT_TOKEN_TO_BE_REPLACED

The highly controversial Indian blockbuster "The Kashmir Files“, on the exodus of Kashmiri Hindus in the 1990s, is characterised by unilateral representations, negative ... END_OF_DOCUMENT_TOKEN_TO_BE_REPLACED

With his fist bump greeting for a man he previously called a pariah, US President Biden has paved the way for Saudi Crown Prince Mohammed bin Salman's return to the international ... END_OF_DOCUMENT_TOKEN_TO_BE_REPLACED

END_OF_DOCUMENT_TOKEN_TO_BE_REPLACED
Social media
and networks
Subscribe to our
newsletter