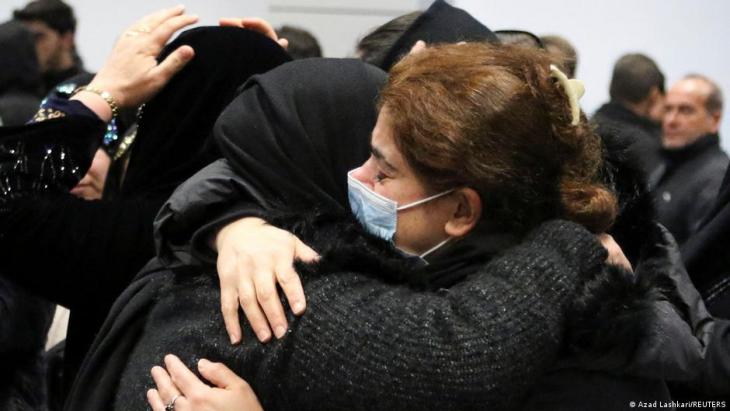 "If I don't call you back, it's because I will be in England," Shakar Ali said in his last message to his family as he attempted to cross the Channel from France to Britain. But the inflatable boat he took along with around 30 other irregular migrants would never reach British shores.

Nearly a month after at least 27 of those migrants drowned, families of 16 of them finally got some closure on Sunday as their bodies arrived in Iraqi Kurdistan. The remains arrived before dawn at the airport in the Iraqi Kurdish regional capital Erbil, where dozens of men, women and children had gathered.

Among the mourners, some embraced, and black-clad women wept while others showed pictures of their lost kin. Clutching his cane to his chest, an elderly man with a white beard showed a photo on his phone of his son Afrasia, who was just 24 years old.

The tragedy on 24 November has been described by the International Organization for Migration as the largest single loss of life in the English Channel since the UN agency started recording data in 2014.

The plain wooden coffins were placed in ambulances that transported them to their hometowns of Darbandikhan, Qadrawa, Ranya and Soran.

A woman sobbed as she pressed her face up against a window pane. Close by, two teenagers appeared similarly shaken. One of them rested his head against a casket, bidding his final farewell.

In the centre of Ranya, hundreds gathered in a mosque to honour the three victims from the Kurdish town. The bodies were washed in the traditional Muslim way. The crowd filled a large prayer hall, and in the heavy silence, the murmurs of funerary prayers could be heard.

Shakar Ali, 30, left his home two months ago, making the long trip via Turkey, Greece, then Italy, before his Mediterranean journey ended in France. "He attempted the crossing to Britain seven times," his older brother Shamal said. "Each time, he failed." Three years earlier, Shakar, who had a degree in petroleum geology, was searching for a job. "He was unemployed until his departure," his brother, a teacher, continued.

He blamed the recent tragedy on the lack of job opportunities, as well as the policies of the authorities in the autonomous Kurdistan region. "Because of this, hundreds of families have lost a child."

At the cemetery in Ranya, the young man's shrouded body was lifted on the shoulders of the men of the family. A crowd gathered as the body was lowered into the grave. The youngest of the family, Ramyar, recalled his last conversation with his brother. "He told us 'We have started the crossing. If I call you, it means the coast guard has arrested us'," the 20-year-old recounted. "'If I don't call you back, it's because I will have arrived in England'," he continued.

Initially set to arrive on Friday, the repatriation of the 16 Iraqi Kurdish victims was postponed twice.

Among the 26 bodies identified in France were 17 men and seven women aged between 19 and 46, as well as a 16-year-old and a seven-year-old child. In addition to the 16 Iraqi Kurds, the victims also included an Iranian Kurd, a Somalian, four Afghans and an Egyptian. Only two survivors were found, an Iraqi Kurd and a Sudanese national.

French investigators are still trying to establish a clearer picture of what happened during the disaster. They have been investigating reports that the passengers had telephoned both French and British emergency services, appealing for help when the vessel began sinking.

At the airport in Erbil, the family of young Baran hung a banner on the back of a moving ambulance that carried her body back to her hometown of Soran. On the banner alongside a smiling picture of the young woman it said "Bride of the sea". Maryam Nuri Hama Amin – known as "Baran" to her family, a name meaning "rain" in Kurdish – was only in her 20s when she set off on the trip. She was one of the first Kurdish victims to be identified from the disaster. She was planning on joining her fiancé, who was already in Britain, in the hope of seeking a "better life" there, her father had told AFP shortly after the tragedy.

While the tragedy was the worst recorded in the Channel, at least 30 people have died this week alone in three shipwrecks off the coasts of Greek islands. Among the survivors were Syrians, Egyptians and Iraqis. (AFP)

More on this topic
Photo essay: Amal's journey through EuropeMigrants and the EU: Is Europe ready for a post-COVID migration wave?Underage migrants stranded in Spain: The lost children of Ceuta and the "warehouses of shame"
Home
Print
Newsletter
MoreAll Topics

END_OF_DOCUMENT_TOKEN_TO_BE_REPLACED
Social media
and networks
Subscribe to our
newsletter