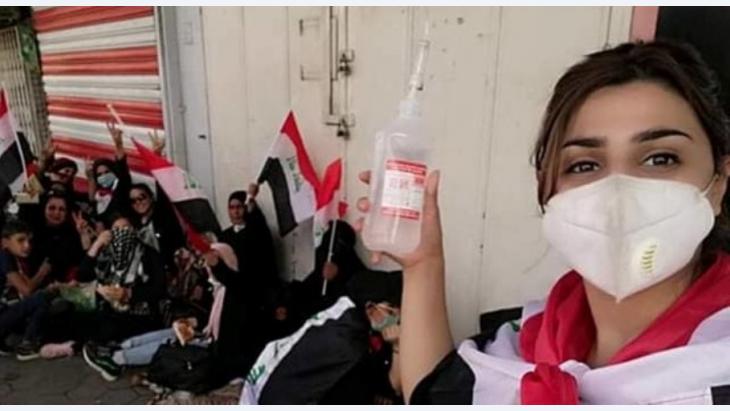 The female paramedics of Tahrir Square

During the protests against the central government in Baghdad, Iraqi women have been volunteering as nurses and learning first aid. They are also changing the status quo and promoting the rights of women in the country. By Azhar Ali Hussein

“We have come here with a goal in mind and we will not leave until we have achieved it,” says Tiba Fadel determinedly; the 18-year-old Baghdad local is one of the dozens of young women committed to nursing and providing first aid to anti-government protesters in the Iraqi capital’s Tahrir Square.

Even though she has been threatened and harassed, both online and in real life, for her nursing role, Fadel is still here. Her brother is protesting and has been injured six times. And one of her colleagues died in front of her. “Pieces of his brain and skull were splattered on the ground in front of me,” she recalls. “I cannot forget the ugly way he died and his mother, who was waiting for his return. I have already told my mother to expect the worst and the possibility that both myself and my brother might die. When the doorbell rings now, she gets scared. But,” she concluded, “we will not retreat.”

When she first came to Tahrir Square, Fadel didn’t know anything about first aid – she was in her last year of high school. But now, having learned how to help during the protests, she would like to study medicine.

Fadel is just one of many. Visiting Tahrir Square, you can see dozens of local women performing a nursing role or trying to help, often as well as demonstrating themselves. Their white coats are stained with blood and they run from one tent to another treating the injured as best they can.

When we visited, one woman dashed past to help with an injury. Another was preparing to accompany an injured protester to the hospital to treat a more serious wound – they were both scared he would be arrested there.

Another of the nurses here is Zainab Abdul Dawood al-Qaisi. She is a mother of three and actually works for a government office. She’s not a real nurse either but is committed to the cause. She was shot and had to have two operations as a result but returned to help again anyway.

“I came back two days after my operation despite the pain and the risk,” she explains. “There are people here who need my help and when I am here, my own injuries do not hurt as much.”

Her husband and her family actually don’t like her coming here and some relations have stopped visiting her at home as a result, she says. Nonetheless al-Qaisi is determined to keep working here – she’s been here since the first day of the protests and plans to stay until the last.

No bribe, no job

Israa Ibrahim brings her pre-school aged daughter and her elderly parents to Tahrir Square every day while she works as a first aid nurse. She says she has been verbally abused and humiliated by the military forces around the square but she continues to attend.

Ibrahim graduated from university with a degree in finance and banking but she still has not been able to get a decent job, despite increasing demand for her skill set. “Every time I submit my CV, I am asked to pay a bribe or else the job goes to a relation of the bank’s managers,” she complains. “There are hundreds of people here in the square who have had to deal with a similar situation – graduates who are unemployed for the same reasons.”

Meanwhile Dua al-Ali has had to block her whole family from her social media accounts. The fine arts student first came to Tahrir Square as a protester, but has since learned a lot about first aid and taken on a paramedic role, and she doesn’t want her family finding out what she is doing or worrying about her. She comes here to help every day but tells her family she is going to university.

“My parents will only know what I am doing after they receive my body, if I die here,” she proclaims. “I am here for the sake of my brothers and my family. It is my duty and my responsibility and I cannot abandon them.”

There is also another aspect to the nursing work they do here, all of the women agree. "Our presence here is another revolution against a deep-rooted social tradition about female roles,” Fadel explains. “You can see that based on the messages I used to get on Facebook. At first I would get negative comments and insults but now people are saying they are proud of what we are doing. That wouldn’t have happened if we hadn’t made the commitment to be here and help.”

In his book "Ground Zero: 9/11 und die Geburt der Gegenwart" (Ground Zero: 9/11 and the Birth of the Present) Islamic scholar Stefan Weidner analyses the consequences of the ... END_OF_DOCUMENT_TOKEN_TO_BE_REPLACED

The rollout of coronavirus vaccines in the Middle East and North Africa is already taking place on a massive scale, with the United Arab Emirates leading the way. Nevertheless, ... END_OF_DOCUMENT_TOKEN_TO_BE_REPLACED

German Middle East analyst Guido Steinberg and television journalist Ulrich Tilgner have both published new books on the conflicts in the Middle East. Their analyses and their ... END_OF_DOCUMENT_TOKEN_TO_BE_REPLACED

The Pope’s journey to the "land between the rivers": places of terror and a dialogue to promote hope and optimism. His meeting with Shia Grand Ayatollah Ali al-Sistani was a ... END_OF_DOCUMENT_TOKEN_TO_BE_REPLACED

When Pope Francis sets foot in Iraq, he will be breaking historic ground while manoeuvring religious and political minefields. So will his foremost religious counterpart, Grand ... END_OF_DOCUMENT_TOKEN_TO_BE_REPLACED
Author:
Azhar Ali Hussein
Date:
Mail:
Send via mail

END_OF_DOCUMENT_TOKEN_TO_BE_REPLACED
Social media
and networks
Subscribe to our
newsletter