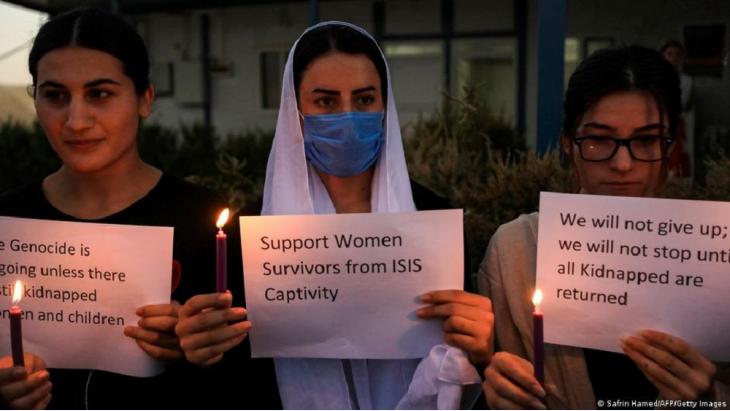 Historically Iraq's Yazidi community was isolated, under-resourced and very conservative. Seven years after the "Islamic State" tragedy, the community is more open to the world – and Yazidi women are benefitting. By Cathrin Schaer

"We really appreciate your visit," Luqman Suleiman told a group of tourists from around Iraq and Germany recently, when he met them at the entrance of the Yazidi temple, Lalish. For the ethno-religious Iraqi minority this site in northern Iraq is the equivalent of the Vatican to Catholics, or Mecca to Muslims. Every Yazidi is expected to come here at least once in their lifetime. And these days, more outsiders are coming here too.

"It is really so important that people come here and listen to the Yazidis," Suleiman, a spokesperson and guide at the temple, said. "You shouldn't listen to other people. They may speak falsely about us." Suleiman was talking about long-standing prejudices against his community in Iraq. Their highly secretive and ritualistic religion – traditions and rules are passed on orally and outsiders are prohibited from knowing most of them – has made the minority a target of the Muslim majority in the country.

The Yazidi faith has been described as "dualist" because they believe that good and evil are part of the same divinity. This is also why some Iraqis have described them as "devil worshippers" and, for example, won't eat any food prepared by Yazidi hands.

It is the same sort of prejudice that made the small religious community, which is thought to number around half a million inside Iraq, a target for the extremist group known as "Islamic State" (IS). As the extremists took over swathes of the country in 2014, the minority's marginal status was part of the reason why the IS militants felt they could kill, rape and enslave thousands of members of the community with impunity. 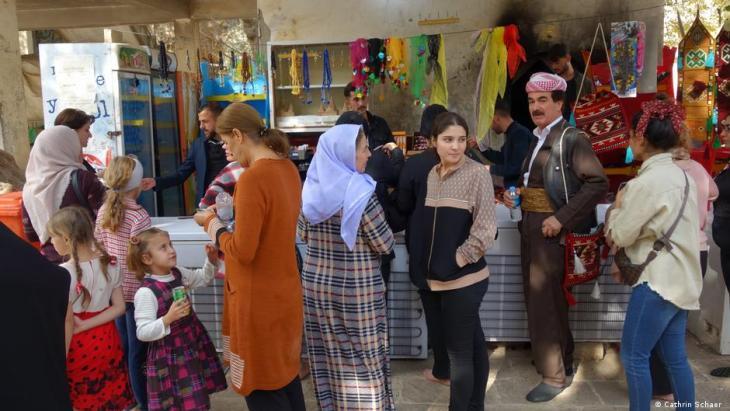 The Yazidi religious community is one of the oldest religions in the Middle East: Their highly ritualised and seemingly secretive religion – traditions and rules are passed on orally, outsiders are not supposed to know much about them – has made the Yazidis a target in a Muslim-majority country.

The Yazidi minority was forever changed by the IS group's brutal assault on them. By the time the extremists were more or less pushed out of northern Iraq in 2017, thousands of Yazidis had been killed or kidnapped. Several international bodies now classify the events as a genocide. Today, around 240,000 are still living in camps for the displaced, many in grinding poverty.

"The Yazidi community has transformed toward more openness," said Murad Ismael, head of the Sinjar Academy, an institute in northern Iraq providing education to locals in the area. "The Yazidi community has nothing to hide but I believe, in the past, many thought it was better to not discuss identity or faith. I also think the world today is more passionate and supportive to the Yazidis, which encourages them to be more open." 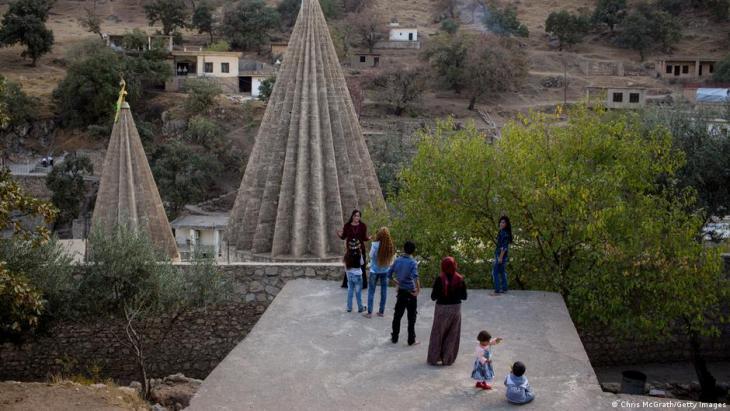 A bustling scene at the entrance to the Yazidi Lalish temple: Lalish is the most important place of pilgrimage for the Yazidis. The Kurdish Yazidi community comes here regularly to celebrate their religious festivals

One noticeable change has come in Yazidi women's rights, Suleiman told his curious visitors. "Before the IS group came, a woman was not free to leave her village without a male guardian," Suleiman said. "But after the IS time, people have more of an open mind. Women can leave their village and catch a plane to Europe, if they want to," he said, smiling and gesturing at the sky above the hills surrounding the 4,000-year-old temple.

"In the past, the community would not have accepted that," confirmed Naven Symoqi, a Yazidi activist and journalist from Sinjar, the district where many Iraqi Yazidis reside." But after many Yazidis became displaced, they ended up in different parts of Iraq and they saw different ways of doing things."

That experience, said a local in northern Iraq, who worked with Yazidis in a displaced persons' camp, has had impact. "Imagine if you come from a really isolated agricultural community without many resources, where many people were not educated beyond primary school level. And then you've been displaced, you're in a camp, and there are all these NGOs running programmes on education and women's rights," said the source. The person in question requested anonymity in order to speak candidly about the community with which they still work. 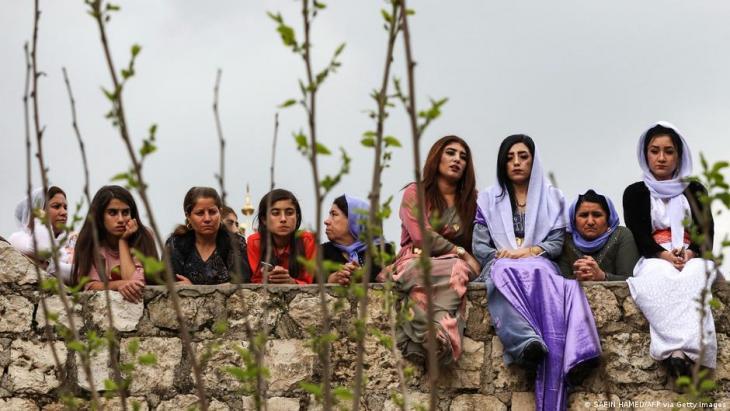 In her book "The Yezidis: The History of a Community, Culture and Religion", Orientalist Birgül Acikyildiz describes the Yazidis as a strongly patriarchal community in which women are still mainly responsible for children and the household. When the researcher wanted to eat in a restaurant in the town of Behzane in the evening, she was told that women did not do so. When she insisted anyway, she became, according to her guide, the first woman ever to eat in public in Behzane. In village communities, marriages are still arranged by parents. Education levels are low - until not long ago, reading and writing were the preserve of the clerical castes

Symoqi marvels at the fact there are now driving schools for women in town. She also knows of Yazidi women studying at universities and praises Amera Atto, a Yazidi who competed in 2021's Miss Iraq contest.

Yazidi women involved in local survivor networks are also doing things they never would have before, such as travelling to cities to meet male politicians to discuss justice and compensation.

Because of the murders of their male relatives, many Yazidi women became heads of their own households, pointed out Abid Shamdeen, executive director of Nadia's Initiative.

His non-profit organisation, founded by Nadia Murad, a Yazidi survivor and Nobel Peace Prize recipient, has been able to help Yazidi women set up their own small businesses, rebuild homes and access education. 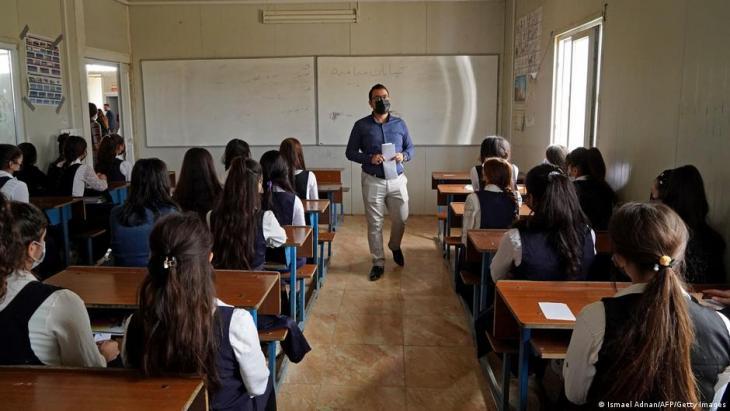 "We have seen that these kinds of projects have a profoundly positive impact on Yazidi women," admitted Shamdeen. "After IS' destruction, Yazidi women have very much taken the lead in advocating on behalf of their community, both locally and globally."

Yazidi women are also benefitting from better access to education and job opportunities, the Sinjar Academy's Ismael added. "There are more women employed and some even own small businesses or lead NGOs. This is really something new to the Yazidis of Iraq."

Despite its awful origins, this new attitude could be seen as a positive development. The Yazidi religion has strict rules. You cannot convert into it, nor can you leave it. Adherents may not even marry out of their own caste within the community, let alone outside of the religion.

In one high-profile case from 2007, Dua Khalil Aswad, a young Yazidi woman, who was thought to have converted to Islam for love was beaten to death in public, including by members of her own family. 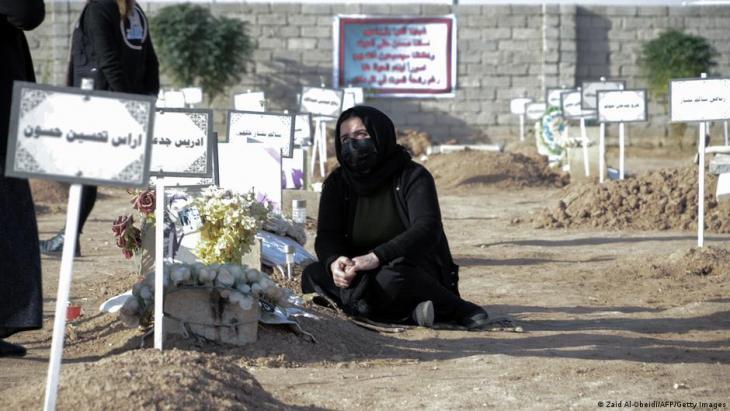 The latest genocide in history began on 3 August 2014: members of the so-called Islamic State (IS) invaded northern Iraq to wipe out the Yazidi religious minority. Tens of thousands of Yazidis had no choice but to flee. But not all of them managed to escape in time. The fighters of the IS terrorist militia committed mass murder of the men, abducting the women and children to enslave them

In 2011, after a growing number of suicides among young Yazidi females, researchers from the International Organization for Migration conducted community interviews to find out why this was happening. They concluded "the marginalisation of women and the view of the woman's role as peripheral" were to blame, alongside isolation, unhappy arranged marriages, unemployment among females and community and sectarian tensions.

Much remains to be done

Still, community members accept that, despite recent changes, much remains to be done. For one thing, the former camps worker explained, there's still a big difference between the way Yazidi survivors and other women in the community are treated.

"Some are welcomed back by their families, others are not. Although the community doesn't like to talk about it like this, it's a bit of a disaster," the source said. "And all this [the new rights Yazidi women have] is still only possible with the permission of male family members. It's still deeply patriarchal here. Then again," they concluded, " these things take time. And once people are given opportunities, it's very hard to take them away again."

Home
Print
Newsletter
More on this topic
Pursuing prosecution in Germany: Justice for Yazidi survivors of Islamic State genocide Interview with author Ronya Othmann: Fighting the obliteration of Kurdish-Yazidi identityNadia Murad: One woman's fight against Islamic StateThe abduction of women by IS: Traded like cattleThe culture and faith of the Yazidis: Demonised and eternally misunderstood
Related Topics
'Islamic State' | IS, 9/11, Arab world, Jihadism | Jihadists, Minorities in the Muslim world, Radicalisation, Women in the Islamic world, Yazidi
All Topics

The notorious U.S. prison camp is 20 years old. Over the years, several plans to close it have been rejected. For the detainees, little has changed in the last two decades. Oliver ... END_OF_DOCUMENT_TOKEN_TO_BE_REPLACED

Asef Bayat, professor of Sociology at the University of Illinois, Urbana-Champaign, has been studying revolutions and how they affect people since 1979. In his recent book, " ... END_OF_DOCUMENT_TOKEN_TO_BE_REPLACED

Young people in northern Iraq are so disillusioned that many are trying to leave the country any way they can. Some fear widespread discontent could push people toward potentially ... END_OF_DOCUMENT_TOKEN_TO_BE_REPLACED

In this new bilingual edition, translated by Humphrey Davies, al-Jawbari, one of the thirteenth century's leading experts in skullduggery reveals all there is to know about the ... END_OF_DOCUMENT_TOKEN_TO_BE_REPLACED

In Iraq, returning families of IS fighters have to turn to local initiatives for help, as there is no official path home. Judit Neurink met with families on the ground END_OF_DOCUMENT_TOKEN_TO_BE_REPLACED
Author:
Cathrin Schaer
Date:
Mail:
Send via mail

END_OF_DOCUMENT_TOKEN_TO_BE_REPLACED
Social media
and networks
Subscribe to our
newsletter