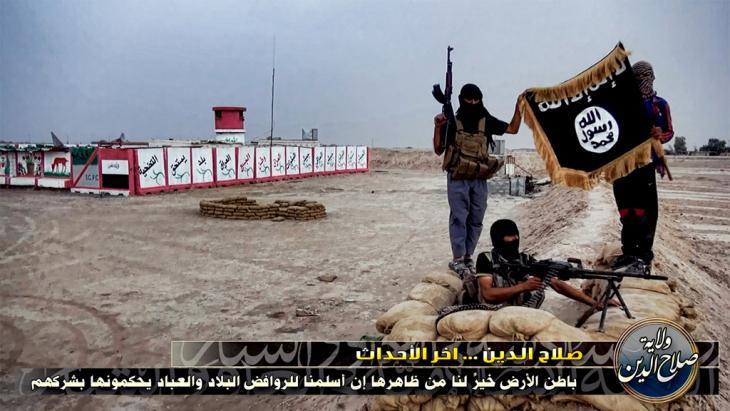 ISIS propaganda and use of social networks
The online jihad

The terrorist group ISIS (which now refers to itself as Islamic State) has been conducting a massive propaganda campaign via social networks on the Internet. In addition to intimidating opponents, the group wants to establish its own media brand. By Nastassja Steudel

Some nine men stand stooped over in a line; their heads are bowed and each one is holding on to the man immediately in front. A masked man aims his machine gun directly at the group. The photo, published by a jihadist organisation, shows a group of captured Iraqi soldiers being paraded by the radical Islamists of ISIS (Islamic State of Iraq and the Levant). In another photograph, several mostly young men lie next to each other on the dusty ground. Behind them stand 15 to 20 ISIS fighters, their weapons pointed at their victims.

The Islamists have been using such images on the Internet to boast about their success. The group's supporters as well as its opponents can now immerse themselves in the horrific world of jihad via Instagram, YouTube and Twitter. From the very start of its campaign against the Iraqi capital Baghdad, a live ticker has been providing anyone interested with a minute-by-minute account of supposed battle successes, looting and executions. The purpose of the media offensive on social networks is to motivate supporters and serve as a warning to adversaries in areas not yet conquered.

"The media communication work done by ISIS is by far the best of all groups within the jihadist movement," says the Islamic scholar Guido Steinberg in an interview with the "taz" newspaper. This development can be traced back to the Iraqi arm of al-Qaida, which professionalised its media work in 2004. All activities were filmed and photographed and subsequently processed by the group's media department. 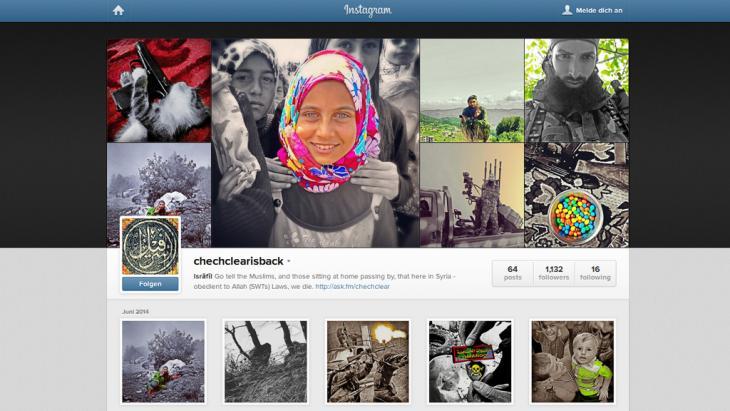 Concerted PR drive on the Internet: with its Internet PR strategy, the Islamist organisation known as ISIS (or Islamic State) is attracting supporters and sympathisers around the world

ISIS is particularly active on the short message service Twitter. The Islamists use a number of accounts to spread Arab hashtags, often bearing the names of martyrs, in an attempt to create, as it were, its own universe. ISIS even has its own app.

"By installing this app, Twitter followers send out – from their own Twitter account – everything published from ISIS' accounts, thereby multiplying the result," explains Yassin Musharbash, an expert on terrorism, in the weekly newspaper "Die Zeit". Musharbash speaks of an extremely powerful propaganda machine. On 11 May this year, when the terrorists captured the Iraqi city of Mosul, which has a population of over a million, more than 40,000 Tweets were sent using this app.

In late June, the people who run Twitter became aware of these activities and blocked around three quarters of the accounts held by ISIS. The app is now no longer available. To date, the organisation has been unable to provide alternative addresses for the service.

Terrorism as a brand

According to Musharbash, the Islamists and their supporters communicate with each other not only via Twitter but also via jihadist websites. "This is where you can still reliably find official statements from the organisation." But some ISIS commanders apparently feel that things have gone too far, explains Musharbash. They are not happy that some of their fighters are constantly present on social networks. "They don't want to reveal too much concrete information about their activities, such as how many fighters are at a particular location at a particular time."

The consumers of this content not only come from the Arab world, but also from Europe and the USA. With the help of its sophisticated PR strategy on the Internet, the organisation has attracted sympathisers to its cause worldwide. Musharbash estimates the numbers of those emotionally supporting the jihadists to be in the thousands to tens of thousands. And this is exactly what ISIS wants to achieve. With public support on Facebook, YouTube and other social media platforms, they are attempting to create their own corporate identity. "ISIS is not yet an established brand, like al-Qaida is. This is what they are working on." 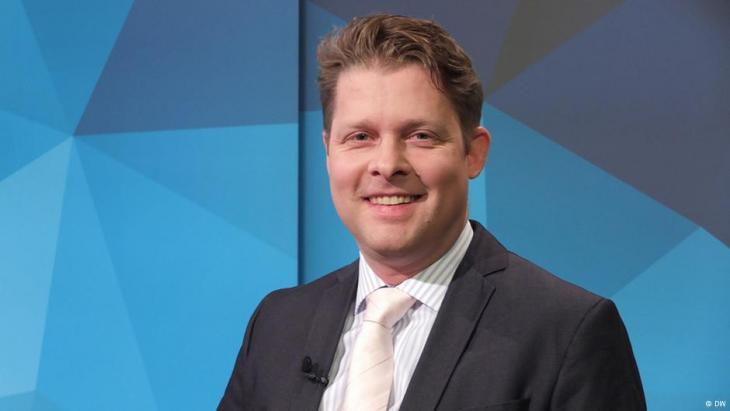 "The media communication work done by ISIS is by far the best of all groups within the jihadist movement," says the Islamic scholar Guido Steinberg of the German Institute for International and Security Affairs

It remains to be seen whether this also applies to the images that have recently been posted on Twitter and Instagram. They show photographs of young "holy warriors" in Syria and Iraq, and it is clear that considerable effort has gone into selecting photos and manipulating them with image-processing programmes.

For example, there is an image of a cat holding a weapon in its paws. A withered tree set on a hill of stones is portrayed in black and white. In the centre of the image sits a presumed Islamist, whose clothing and weapon are emphasised in colour. The terrorism expert Yassin Musharbash refers to such staged images as "Pop jihadism". "This sort of imagery actually has nothing to do with Islam. It is rather a Western form of popular imagery filled with jihadist content." Musharbash believes that the aim, first and foremost, is to reach people in the West who are against jihad.

On 16 June 2014, the Iraqi government completely blocked all Internet access in the provinces controlled by ISIS. The media warfare being conducted by the Islamists had become too dangerous. In some regions, however, the blocked pages were still available because Internet access is in part provided by via satellite connection or directly via landlines to neighbouring countries. It appears that even within the realm of the media, the Islamists cannot easily be held back.

Any reconciliation between Turkey and Syria’s Assad regime would have disastrous consequences for many Syrians, explains Syria expert Kristin Helberg END_OF_DOCUMENT_TOKEN_TO_BE_REPLACED

Iraq bears the scars of decades of conflict and has seen its antiquities plundered, yet the House of Manuscripts' collection has managed to survive END_OF_DOCUMENT_TOKEN_TO_BE_REPLACED

As Syrian camps housing families of Islamic State fighters get more dangerous, there are calls to bring children out, even if the mothers don't want to go. The idea of separating ... END_OF_DOCUMENT_TOKEN_TO_BE_REPLACED

Morocco has taken the 2022 World Cup by storm, with the northwest Africans reaching the semi-finals for the first time in their soccer history. As the knockout match approaches, ... END_OF_DOCUMENT_TOKEN_TO_BE_REPLACED

The Islamic Republic has been unable to quell the civil unrest that erupted three months ago, after Mahsa Amini died after being detained for violating hijab rules. Now the ... END_OF_DOCUMENT_TOKEN_TO_BE_REPLACED

The Kurds are under attack from two sides: from Turkey, and from Iran. The situation in their territories in northern Iraq is becoming increasingly desperate. Birgit Svensson ... END_OF_DOCUMENT_TOKEN_TO_BE_REPLACED
Author:
Nastassja Steudel
Date:
Mail:
Send via mail

END_OF_DOCUMENT_TOKEN_TO_BE_REPLACED
Social media
and networks
Subscribe to our
newsletter