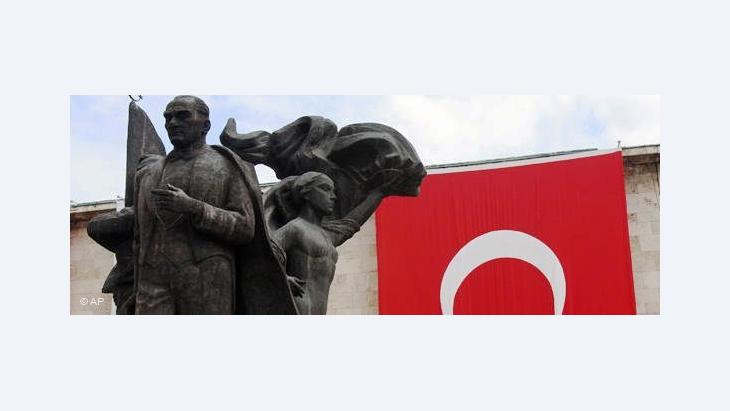 Islam and Politics in Turkey

Turkey's ruling AK Party is splitting the nation in political and geographical terms. It has loyal supporters as well as rabid opponents. In many ways, however, it looks like a faith-based organisation that is capable of stemming Islamist radicalisation, writes Maren Zeidler

Burak Özal is 28 years old. He studied business administration at Harvard and now works for a major consultancy in New York. His Facebook profile picture shows the founder of the Kemalist Turkish Republic, Mustafa Kemal Atatürk, in front of a Turkish flag. Özal is a fanatical defender of the Kemalist republic and its secular values. Özal is one of many.

Denizli is a city in the southwest of Turkey. It has a population of nearly half a million and is dominated by the textile industry. Most of the holding companies are Islamic and follow the rules of the Koran, for example the prohibition of interest. Women seeking work here should wear a headscarf, men should see that their wife does. None of the downtown restaurants serves alcohol. Denizli is one of many, too.

As far as the role of religion is concerned, Turkey's regions and population groups are deeply divided. Nevertheless, the country is politically stable, and other nations consider it a good partner. As regimes teeter and topple in the Arab world, Western as well as Arab journalists wonder whether the Turkish model can be applied to other Muslim countries. 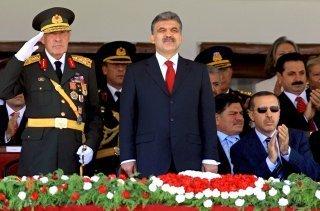 ​​The Turkish model is largely defined by the ruling AKP and its leader Recep Tayyip Erdogan. This politician and "his" AKP are dividing Turkey ideologically and geographically into two camps – fierce opponents and passionate supporters. In the cities and on the Mediterranean coast, the Kemalist establishment and intellectuals like Özal have the people's ears, defending secularism and voicing opposition to the AKP.

In Anatolia and the rural areas of western Turkey – areas like Denizli Province – the AKP has the support of a kind of Islamic bourgeoisie, the new religious-minded middle class.

So what kind of party is the AKP, a party that splits the nation but is perceived as a good partner by many heads of government, a party that is pushing – albeit less and less energetically – for membership of the European Union, a party that implements reforms and presents itself as modern and democratic yet in the weeks before the elections has ordered the arrest of journalists and critics on an unprecedented scale?

Its election manifesto states that the party is neoliberal. But it is also committed to its conservative Islamic roots and values. Supporters often draw parallels with the conservatism of Germany's Christian Democrats.

Opposition to the arch-Kemalist state apparatus

The AKP was established in 2001 by Erdogan, Turkey's current President Abdullah Gül and other politicians. The way was paved for the moderate Islamist party by a new religious-minded middle class with roots in Anatolia. However, ties to religious groups quickly earned the AKP the distrust of the arch-Kemalist state apparatus and entire sections of Turkish society.

The AKP has committed to the principles of the Turkish Republic, and that commitment is so far borne out by its policy decisions. Under the pressure of EU accession talks, the party initiated a host of reforms since it took office in 2002. Europeans were especially in favour of how it reduced the role of the National Security Council. The military's strong influence was diminished, and the prime minister gained new powers.

In recent months, EU accession talks, that did not move forward, lost their priority status in Turkish policymaking. Now the key issue is the fight against the clandestine organisation Ergenekon, a Kemalist ultra-nationalist organization with ties to members of the country's military and security forces, accused of terrorism. 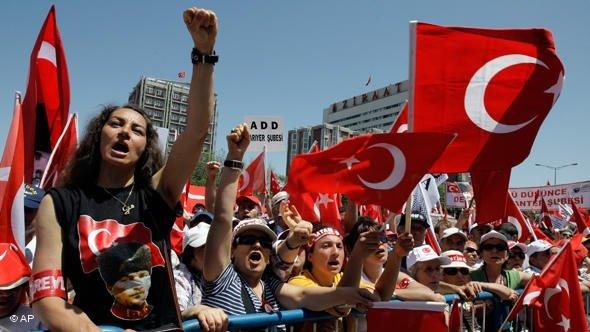 "Warnings of the demise of the Turkish Republic": As far as the role of religion is concerned, Turkey's regions and population groups are deeply divided, writes Maren Zeidler. Pictured: Kemalist anti-AKP protest rally in Ankara

​​The Kemalist establishment views the reformist drive of the AKP and its efforts to secure EU membership with great scepticism. Again and again, moves to boost the power of the party, the parliament or the prime minister have triggered warnings of the demise of the Turkish Republic. A particular grievance is the religious commitment of leading AKP politicians. This issue culminated in 2008, when the attorney general started proceedings to ban the AKP for engaging in alleged "anti-secular activities". The Constitutional Court ruled against a ban with a tiny majority.

Viewed objectively, the fact that politicians hold religious views does not disqualify them from secular politics. The AKP has stressed again and again that democracy is more than just the separation of state and religion; it also grants the freedom of religious expression. But if one takes a closer look at the political background of the AKP leadership, one starts to see why the party encounters vigorous resistance in the cities.

Both President Abdullah Gül and Prime Minister Erdogan have repeatedly used Islamist rhetoric in the past. At a conference in 1998, Erdogan quoted from an Islamic poem: "Democracy is just the train we board to reach our destination. The mosques are our barracks, the minarets our bayonets, the cupolas our helmets and the faithful our soldiers."

For this reason, he was banned from politics for five years and could not become prime minister straight away after the party's 2002 election victory. The alcohol ban in Istanbul's municipal restaurants also was introduced in the 1990s when Erdogan served as the city's mayor.

Development in cities like Denizli – where the number of Islamic enterprises is growing fast – fuels fears that the religious views of party members will also be carried into the political arena. Recent arrests of journalists have added to such fears.

It is a fact that Necmettin Erbakan, who significantly shaped the new Islamist movement in the 1970s, dreamed of Islamising the state by expanding faith-based businesses. Erdogan's career is closely connected with Erbakan. He joined Erbakan's National Order Party in 1970 and became a member of its successors after it was banned.

The strict separation of state and religion

It is also a fact that, in modern history, Turkey is marked by an erratic, but nonetheless close relationship with Islam. In the 1920s, Atatürk, the founder of the republic, ordered the strict separation of state and religion. In the years that followed, Islam was banished from public life. But Turkey was by no means de-Islamised. On the contrary, religion played an integrative role in the country in the wake of the Second World War. 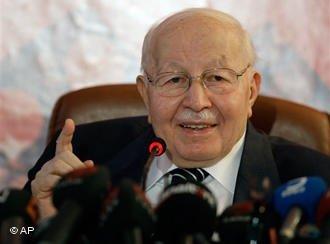 ​​Multi-ethnic Turkey needed a unifying element, and Islam served that function, although the state only granted it a role in private life, but not in public. Movements against the vigorous suppression of Islam soon began to spread.

After the military coup in 1980, Islam's role changed again. The generals sought to use the faith for their own purposes. They introduced religious instruction at all schools and manipulated the state agency for religious affairs. The aim was to nationalise Islam and at the same time Islamise the nation with a new state religion. The military saw republican-nationalist state Islam as a tool for secularising Turkish society and homogenising the different confessional branches to create a united front against Kurdish nationalism.

The AKP is not party to that strategy, but it has to uphold the basic principles of the Turkish Republic. It does not always succeed in doing so, and has thus aroused hostility from many Turks.

Judge by deeds, not words

Despite all fears, it is wrong to judge the party by its intentions instead of its deeds. The Kemalist establishment sees itself as an enlightened force in the country – but it has clung to an authoritarian and undemocratic understanding of the state for decades. No change is to be expected from that quarter any time soon. But if young intellectuals from the Kemalist camp were to initiate a process of modernisation, they could again become a real alternative to the AKP.

Since it was formed, the AKP has steadily evolved into a new kind of centrist party in Turkish politics – a fact confirmed by the outcomes of the parliamentary elections in 2002 and 2007. Erdogan's sweeping electoral victory in 2007 was due to the fact that his government had implemented more reforms in the five years of its first term than all the secular governments had in the 50 years before.

The AKP's transformation into a modern centre-right party seems convincing and makes it attractive to many voters. The party, moreover, has no serious political competition. But it can only command that middle ground and keep the Kemalist camp in check as long as it sticks to its moderately conservative-religious line.

The party's reform zeal and its EU orientation have waned significantly in recent months. That is not a good development and needs to be reversed. Above all, however, the AKP needs to keep its focus on the economic and social needs of the Turkish people. Those needs do not include more religion. The impression that Turkish society has become more Islamic is wrong.

Rural communities and the towns of Anatolia have always been religious, and they have become more important as a result of the economic upswing of recent years. Cities like Denizli are no more Islamic than they were 20 years ago; they have just become more important due to economic success. That development needs to be taken into account, and the only party doing so at present is the AKP.

The party understands the needs and sensitivities of a large section of Turkish society.

No other Western poet was arguably so well-versed in the Koran or so fascinated by Islam as Germany's national hero, Goethe. In a new publication that examines all Goethe's ... END_OF_DOCUMENT_TOKEN_TO_BE_REPLACED

"The people aren’t ready for democracy" has been the constitutional basis for Arab tyranny, its favourite slogan and its sacred narrative for more than a century. Yet, asks Khaled ... END_OF_DOCUMENT_TOKEN_TO_BE_REPLACED

A new global database shows a significant gap in reported COVID-related deaths, suggesting the actual worldwide death toll is short by at least 1 million. That's due in part to ... END_OF_DOCUMENT_TOKEN_TO_BE_REPLACED

Two decades after the attacks of 11 September 2001, the West faces the shattered debris of its failure – not only in Afghanistan, but also in Iraq, Syria, Libya and Yemen. What ... END_OF_DOCUMENT_TOKEN_TO_BE_REPLACED

Caught up in discussions on the future of local Afghan forces and new Islamist threats, people are failing to grasp the historic scale of the debacle, argues Stefan Buchen in his ... END_OF_DOCUMENT_TOKEN_TO_BE_REPLACED

Hamas in Gaza, the Palestinian Authority in the West Bank, and Israel: Palestinians have fewer and fewer rights, says Khaled Elgindy. The Middle East could escalate at any time. ... END_OF_DOCUMENT_TOKEN_TO_BE_REPLACED
Author:
Maren Zeidler
Date:
Mail:
Send via mail

END_OF_DOCUMENT_TOKEN_TO_BE_REPLACED
Social media
and networks
Subscribe to our
newsletter