Islam, Environment and Sustainability
"The Environmental Crisis is also a Spiritual Crisis"

For some years now a global environmental discourse has been underway, one that connects ecological themes with Islamic ethics. But to what extent can Islam really give us guidance on ecological sustainability? Eren Güvercin seeks answers from expert Sigrid Nökel

Concepts of environmental protection are not included in traditional Islamic sources, but Muslims can draw on ideas about the relationship between people and their environment that are of a more general nature

​​ It's rather unusual for Islam and environmental protection to be mentioned in the same breath. What sort of environmental concepts does Islam have to offer?

Sigrid Nökel: The type of environmental problems that we are familiar with are the result of industrialisation and capitalism, so they are relatively recent developments. The Islamic sources, on the other hand, are more than a thousand years old and originated in a completely different context. So we can only draw on ideas about the relationship between people and their environment that are of a more general nature.

There are terms that have come down to us, such as fitra – which refers to creation as an original natural order; tawhid – the unity of creation, which tells us that all things in the world are related to one another and because they are all equal signs of God, all are equally important, valuable and worthy of preservation; mizan – balance, is the state of well-ordered creation, which must be maintained or restored.

Finally there is khilafa, referring to the role of mankind as the trustee of creation. It is the duty of mankind to maintain the order of creation. The fruits of the earth are to be enjoyed, but its resources must not be wastefully exploited.

Also, in the words and deeds of the prophet and the early Muslims, which have come down to us, there are examples to be found that tell us we should be sparing and prudent in our use of natural resources and provide well for our animals. They provide an example to be followed by later generations.

Does the Islamic tradition offer any fundamental concepts related to protection of the environment?

Nökel: There are regulations known from the Islamic regions from former times that one could describe as instruments for nature and wildlife conservation and attempts are now being made to try to revive these. Among these are the so-called harim and hima zones, for example. They include the idea of having protective zones around springs and watercourses, where, for example, no settlements are permitted, so as to keep the water from becoming polluted.

Cotton pickers in Egypt: instruments for nature and wildlife conservation are now revived in Islamic regions; among these are the so-called harim and hima zones, for example

​​ There were also meadow or forest areas, where people were allowed to go at certain times only – after the pollen harvest, for example, or when dry periods were threatening. With privatisation of land, intensification of agriculture and increasing building these practices have been forgotten. There have been attempts at their reintroduction going on for a number of years now as part of water, riverbank restoration and species conservation projects.

You've written about the eco-theology of Seyyid Hussein Nasr in your work. What is that about?

Nökel: Seyyid Hussein Nasr is a Persian philosopher and theologian who was born in 1939. Like some Christian philosophers, Nasr places the question of ecological balance in a religious context. It is based on a cosmological view of the world, with nature, man, God or heaven and earth forming a natural and well-balanced order.

He believes that man has been denying this order since the time of the European Enlightenment, replacing it instead with an anthropocentric order that places man at the centre and gives him free reign, in the absence of a connection to any higher order, to exploit nature.

Nasr sees man as an incredibly selfish and greedy creature, albeit one constantly striving for transcendence. Rootless in a cosmological sense, however, and unable to find true satisfaction, he seeks consolation in ever increasing consumption and the perfection of technology. He sees the environmental crisis as a spiritual crisis. This also applies to Islam and to Muslims who, he believes, need to find their way back to their original path.

Nasr aims, in the Sufi tradition, at individuals first and foremost, who must recognise the cosmological laws and follow them in their own lives. The focus on spiritual orientation would then replace that on consumption. This is at once both very conservative and very topical, if one considers the ubiquitous demands on us to decrease consumption and change our lifestyle.

Muslims have so far not been terribly conspicuous in the debate on environmental protection. Why is that?

Nökel: Muslims are hardly represented in public debate or organisations, at best only very occasionally in their role as ‘migrants'. The religious attitude is seen as a private matter that one does not comment on publicly in order not to compromise oneself. It is, so to speak, a taboo subject. 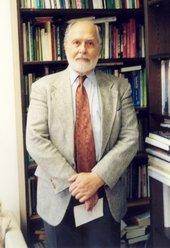 Placing the question of ecological balance in a religious context: the Iranian-American philosopher and theologian Seyyed Hussein Nasr

​​ Most Muslims are unaware of the relationship between religion and environmental conservation, though they are conscious of it in a more general way. The Munich-based foundation Stiftung Interkultur is currently carrying out a small survey. What this has already made evident is that Muslims who take religion seriously express the view that religion demands "respect for nature" which then prompts them to actions in their everyday lives, such as helping to protect green areas or persuading others to be more economical with water and food or to think more about their consumption.

There are, however, no comprehensive empirical studies on the environmental awareness of Muslims. They have so far not been considered as a relevant group in this context, or they have been seen as beyond the reach of these sorts of issues.

What sort of contribution do you think Muslims could make to this currently very hotly debated topic of "environmental protection"?

Nökel: It seems that Muslims still need to more clearly understand the relationship between religion and environment. For many, they are two completely different things that they have so far not managed to bring together. Possibly an idea such as "eco-Islam" could provide new ideas, enable people to identify with the environmental issues, and to look afresh at their lifestyle and everyday habits in this respect.

Nasr does not want to see Islam exhausting itself in the observance of rites and rituals, but instead taking a personal responsibility for the world, one that goes beyond denominational boundaries. This is something that each person has to work on for him or herself. Environmental and climate protection will become matters of spiritual rather than just fashionable significance.

A large number of people could be reached via mosques and Islamic groups, people who do not normally feel that such issues have anything to do with them. Environmental discourses could take root here. Networking with other environmental groups and organizations would be possible. The environmental movement will then have taken a step forward.

Are there any "eco-Islamic" projects or initiatives in Europe?

Nökel: One of the best-known organizations is the British Islamic Foundation for Ecology and Environmental Sciences, IFEES for short. It is a UNO registered NGO and a sister organisation of the internationally active Alliance of Religions and Conservation (ARC), with whom they have worked together on coastal protection measures in Africa. This, along with their initiatives in the UK, has been very effective in helping build up an effective media image for an eco-Islam. They present an impressive synthesis of Islamic and environmental discourses in their professionally produced ecoIslam newsletter.

It provides a skilfully produced mix of articles covering the global issues as well as the everyday and practical. IFEES maintains links with regional British organisations that have started up in the last few years. In comparison, Germany is still something of a developing country in this context.

Dr. Sigrid Nökel is a sociologist. Her PhD on The Daughters of Migrant Workers and Islam (in German) was written at the University of Bielefeld. She has also carried out research work on "Euro Islam" at the Kulturwissenschaftlichen Institut Essen (KWI) and at the University of Bremen. She has authored a study on Islam for the Munich-based Stiftung Interkultur as part of a series on migration and sustainability (Stiftung Interkultur – Skripte zu Migration und Nachhaltigkeit (Link to PDF – in German).

Islam and Development Cooperation
Environmental Protection through the Koran?
Governmental and non-governmental development aid organizations must define the values and goals they share with Muslim partners. But how important is it to refer to Islam in development projects in order to guarantee success? By Martina Sabra

"Toshka" Irrigation Project
How Egypt Plans to Make the Desert Bloom
With its ambitious "Toshka" project, Egypt's government intends to tame the desert and make it fertile using water from the Nile – but at what price? Hassan Znined reports

Islamic NGOs
The Globalisation of Islamic Relief
The experience of one Islamic charity with modest English origins is symbol and portent of changes in the landscape of NGOs worldwide, says Ehsan Masood

Water Conflicts in the Middle East
"There Will Be No Solution without the Exchange of Ideas"
North Africa and the Middle East will have enough drinking water for generations – if resources are sparingly used and efficiently managed. Fathi Zereini, a Germany-based mineralogist from Palestine, elaborates on the outlook

END_OF_DOCUMENT_TOKEN_TO_BE_REPLACED
Social media
and networks
Subscribe to our
newsletter