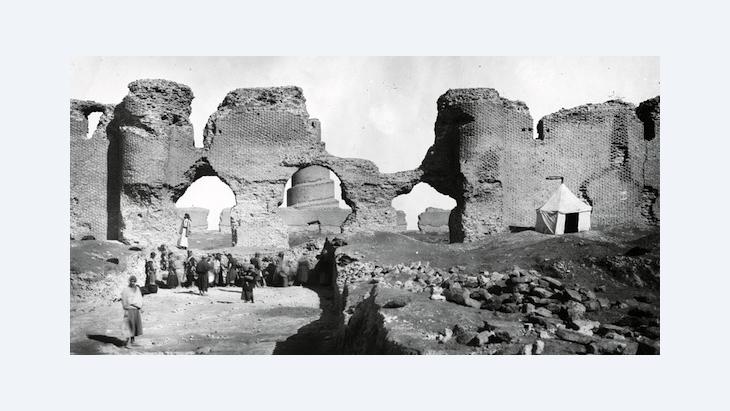 With his excavations in Samarra, the German archaeologist Ernst Herzfeld founded "Islamic Archaeology". On the 101st anniversary of his excavations in the city, which is situated in modern-day Iraq, a special exhibition marking his work has opened its doors in Berlin. By Jannis Hagmann

When describing the gigantic dimensions of the city of Samarra, Ernst Herzfeld liked to draw comparisons with Berlin. When writing about the Palace of the Caliph in 1914, he noted "that the surface area of the palace is approximately the size of the centre of Berlin, which is bounded by Leipziger Strasse in the South, the Brandenburg Gate in the West, and the Spree in the North and East." The seat of the caliphs, the centre of Samarra, measured 125 hectares in size. This was the heart of the magnificent city that was for a short time home to the Abbasid caliphs.

Anyone who entered the city from the desert in the ninth century must have been completely overawed. The city was briefly not only the capital of the Abbasid Caliphate, but also – as the title of the special exhibition at the Berlin Museum of Islamic Art puts it – the Centre of the World. The caliphs who resided in Samarra had it all: courts, baths, throne rooms, gardens and even polo grounds and race-courses for horses; in short, they lacked nothing. 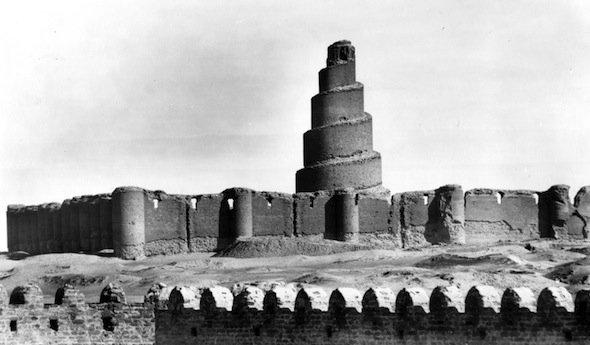 The Mosque of Samarra was the largest mosque in the world. It is said to have been large enough to hold 100,000 people. The mosque was destroyed in 1278 CE after the Mongol invasion. Only the outer wall and its minaret remain

​​The great mosque, with its famous spiral minaret, is said to have been large enough to hold 100,000 people, several thousand more than the capacity of Berlin's Olympic Stadium.

A short-lived centre of an empire

The official name of the city was "surra man ra'a", which translates as "who sees it rejoices". The Abbasids, the second dynasty to rule over the Muslim Empire of the Caliphate, had previously moved their administration from Damascus to Baghdad.

However, conflicts with the military forced Caliph Al-Mutasim, his court and his legions of personal slaves to move for a second time in 836. The caliph and his successors developed Samarra, which was a two days' journey and 125 kilometres to the north of Baghdad, turning it into one of the most complex and sophisticated cities in the world.

For just under six decades, the city on the banks of the River Tigris was the centre of an empire that stretched from Morocco in the West to the Indus River delta in the East.

The excavations at Samarra, which Herzfeld led from 1911 to 1913, were the first of their kind. Never before had archaeologists focussed so systematically and exclusively on the Islamic period. At the time, "Islamic Archaeology" was not an academic discipline.

For this reason, the excavations and research carried out in Samarra are of great academic significance. To mark the 101st anniversary of these excavations, a small exhibition entitled "Samarra – Zentrum der Welt" (Samara: Centre of the World) has opened its doors at the Museum of Islamic Art in Berlin. It includes not only valuable artefacts from Samarra and articles from the museum's permanent collection, but also a number of historic photos of the excavations themselves.

A secret agreement with the Sultan

Initially, conditions for Herzfeld were very good indeed. The artefacts from Iraq – which was, at the time, under Ottoman rule – did not have to be brought to Constantinople. Wilhelm II had concluded a secret agreement with his ally, Sultan Abdul Hamid II of the Ottoman Empire. According to this agreement, the Germans were entitled to half of everything that was found at the excavation sites. Numerous valuable items were transported directly to Germany and put on display in museums there. 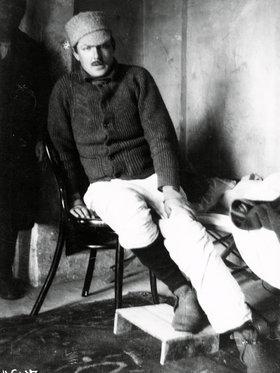 Exploring parallels between Samarra and Berlin: At the capital of the Abbasid caliphs Ernst Herzfeld carried out the first excavations of an Islamic period site in 1911–13. He was later appointed the first professorship for Middle Eastern archaeology in the world

​​Visitors to the exhibition in the German capital will marvel at the stucco decorations, brilliant ceramics, murals and pieces created by master glassmakers from the Abbasid era on display there. The murals, which were taken from the enormous Palace of the Caliph at Samarra, show various figures, including Christian priests. These are rare examples of the fact that the Islamic ban on images was not always applied with equal rigour in the past.

Above all, however, Samarra is famous for its exceptional stucco work. A stucco wall revetment was reconstructed using original fragments. It gives an impression of what the inside of palaces and private homes in the Abbasid capital must have looked like.

The abstract Samarran style, with its rows of patterns, succeeded the tendrils and grapes that dominated the style of Late Antiquity and spread far beyond the borders of the city. In the ninth and tenth centuries, it was all the rage across the Empire. The advantage of this new style of decoration – whereby patterns were carved into stucco or wood instead of working in high-relief – was that it was much cheaper to produce.

Be that as it may, the savings the caliphs may have made in this area did not prevent their financial ruin: too fond were they of large-scale construction projects. In 892, a financial crisis forced Caliph Al-Mutadid to move his administration back to Baghdad. Only a few decades after the foundation of the city, Samarra was abandoned once again.

The city would probably have sunk into obscurity were it not for the shrines of two imams, which meant that it remained a Shia place of pilgrimage. The images of the golden domes of the Al-Askari shrine became famous worldwide when the "Tomb of the Two Imams" was destroyed in a bomb attack.

The curators of the exhibition ib Berlin provide an insight into the desolate state of the city and the living conditions for its residents in a media presentation. Short films show street scenes; a resident recalls on film how busy the city used to be with all the pilgrims who flocked there before war and terrorism ruined its economy. At the end of the presentation, a cameraman adds the following epilogue: "It was very difficult indeed to film in Samarra. The security measures have turned the city into a kind of army camp."

Home
Print
Newsletter
More on this topic
Interview with Jonathan M. Bloom: An Ancient Game of Architectural ''Tit for Tat''Archeology: The Middle East Conflict Fought Out on an Ancient Muslim Cemetery10,000 Years of Art and Culture from Jordan: On the Origins of Human Civilization
Related Topics
Archaeology, Islamic art
All Topics

The Kurds are under attack from two sides: from Turkey, and from Iran. The situation in their territories in northern Iraq is becoming increasingly desperate. Birgit Svensson ... END_OF_DOCUMENT_TOKEN_TO_BE_REPLACED

November 2022 sees the Arab world firmly in the spotlight with the COP27 in Egypt and the FIFA World Cup in Qatar. Public trust in MENA governments is weak, thanks to their ... END_OF_DOCUMENT_TOKEN_TO_BE_REPLACED

Thanks to climate change, the Middle East is heating up faster than any other part of the world, putting the region's ancient pyramids, castles, holy and other heritage sites at ... END_OF_DOCUMENT_TOKEN_TO_BE_REPLACED

In the run-up to the COP27 global climate summit, hosted by Egypt in November, it is worth noting that little rainfall, aggressive heatwaves and worsening drought make the Middle ... END_OF_DOCUMENT_TOKEN_TO_BE_REPLACED

Hundreds of porters, locally known as ‘kolbars’, cross the mountainous border between Iran and Iraqi Kurdistan all year round. With Iran’s economic crisis deepening, ever more ... END_OF_DOCUMENT_TOKEN_TO_BE_REPLACED

END_OF_DOCUMENT_TOKEN_TO_BE_REPLACED
Social media
and networks
Subscribe to our
newsletter