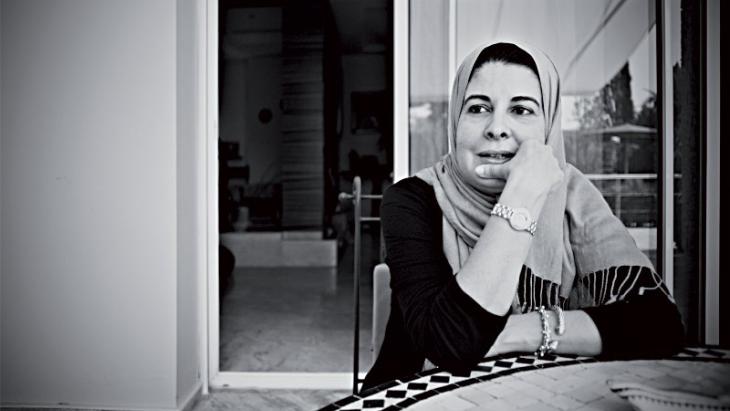 Conservatives in Morocco have forced the Islamic feminist Asma Lamrabet to relinquish her post at the Centre d'Etudes Feminines en Islam in Rabat. A debate on discrimination against women in Islamic inheritance law sparked the conflict, fuelled in part by a draft amendment in Tunisia that would institute an egalitarian law of inheritance there. By Claudia Mende

Asma Lamrabet has gone underground for the time being. She is not giving any interviews or answering her emails. Lamrabet cancelled her participation in a discussion on "Women and Religion" at the Spanish Cultural Institute in Rabat in late March. She needs a break.

Conservative circles have compelled the feminist to give up her post as director of the Centre d'Etudes Feminines en Islam (Islamic Women's Studies Centre) at the Rabita al Mohamadya des Oulemas, a kind of think tank under the auspices of the King that endorses a modern Islam.

Lamrabet's resignation caused quite a stir in Morocco, with the national media styling her a victim of Salafists and conservatives.  "Asma Lamrabet: Sacrificed on the altar of the patriarchy", was the headline in the magazine TelQuel. In a written statement entitled "Fight back!", the prominent feminist gave some clues as to the reasons behind her resignation and then decided to withdraw into silence.

Lamrabet is a physician and author who counts among the leading pioneers of a liberal, reformist Islam in Morocco. She has written seven books describing how Koranic texts can be disengaged from patriarchal interpretations. In her view, there is not a single verse in the Koran that would justify an attitude of male superiority over women.

For a progressive and non-political reading of the Koran

"I have always endorsed a progressive, reformist and non-political reading of the Koran, giving women a new way to access the text," she wrote in her statement. In her books and through her work at the Centre d'Etudes Feminines, she has effected "a deconstruction of patriarchal and restrictive readings".

Regarding her resignation, she writes:  "Due to conflicting positions [at the Centre] on the equality of men and woman in Islam, I was forced to hand in my resignation." 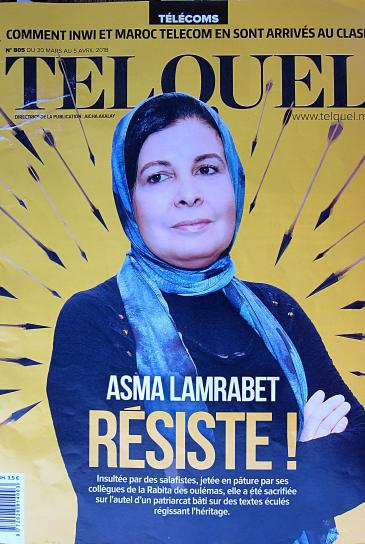 Thrust into the limelight: Lamrabet's resignation caused quite a stir in Morocco, with the national media styling her a victim of Salafists and conservatives. "Asma Lamrabet: Sacrificed on the altar of the patriarchy", was the headline in the magazine TelQuel

This explanation is formulated in very general terms. The actual trigger for the campaign against Lamrabet was her call to end discrimination against women in current Islamic inheritance law. At a conference held by the research institute, she had presented and argued for her demand and the Moroccan media reported on her talk. She is not the only one in the country pushing for egalitarian inheritance law, but her celebrity thrust the issue into the spotlight.

Women at a legal disadvantage

According to Moroccan family law (code marocain de la famille), inheritances are governed by the principle of Ta'sib, which specifies that women are only entitled to half of what a man inherits. For example, if a woman's father dies and she has no brothers, she must share her inheritance with distant male relatives. This provision can lead to great hardship when distant uncles or cousins insist on their rights and deprive women of their economic subsistence.

Liberal families try to circumvent the law, for example by making gifts to their daughters during their lifetime. "More and more parents of girls want to sign over their assets to their daughters during their lifetime," says psychologist Siham Benchekroun from Casablanca. "This shows that we do have a problem." Along with Lamrabet, Benchekroun is among the leading activists in the fight against the discriminatory inheritance law.

Their demands have become increasingly vocal in recent years. An important milestone in the debate was a recommendation made by the Conseil national des droits de l'homme (National Council for Human Rights) in October 2015. The Council expressly spoke out for equality in its report, thus fanning a debate that the conservatives wanted to avoid at all costs. This recommendation initially had no consequences, however, because political parties did not take up the matter.

In April 2017, Benchekroun then published the anthology "L'heritage des femmes" (The Legacy of Women) with contributions in French and Arabic by authors from various disciplines. The psychologist is also the initiator of a March 2018 petition calling for the abolition of Islamic inheritance law.

Around one hundred Moroccan intellectuals have signed it, including the writers Leila Slimani and Driss Ksikes. Islamic law on inheritance "no longer befits the situation of Moroccan families and the current social context", says the petition. "It penalises especially the poorest women and forces many parents to bequeath their assets to their daughters during their lifetime. Moreover, this provision is purely a result of fiqh (jurisprudence) and not a divine commandment."

Nevertheless, Islamic inheritance law is a symbolically charged issue in Moroccan society that touches on deep-seated cultural identities and has an impact on battles for the distribution of material goods. Polls have shown that a large majority of Moroccans of both sexes are against amending the law. Many people deem the regulation to be God-given.

Lamrabet has been trying to change this view in her writings over the past several years. So why are such vehement reactions being witnessed only today? The author herself does not wish to comment on events at the moment. But Siham Benchekroun responded to Qantara's enquiry on her behalf.

Benchekroun rejects the narrative of Lamrabet as a victim of the Salafists. Lamrabet's resignation was a result of normal conflicts within an institution, the psychologist says. Local and international media have blown the issue out of proportion. "Lamrabet's resignation has thus taken on exaggerated significance, distracting people from the real matter at hand." 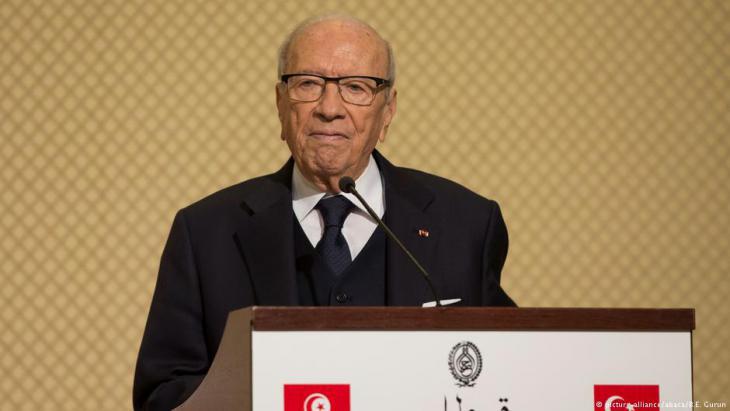 For a reform of Islamic inheritance law: prior to local elections in Tunisia, the countryʹs 90 year-old president and regional pioneer Essebsi grandstanded several wide-reaching initiatives to boost the rights of women: marriage to non-Muslims, a new inheritance law – guaranteeing female heirs the same share as male heirs – as well as legislation foreseeing harsher penalties for violence and sexual abuse against women

The real issue is also coming back to the fore through events in neighbouring Tunisia, which are being watched closely in Morocco. Tunisia is evidently just about to reform its own Islamic inheritance law. President Essebsi announced in August 2017 that the inheritance law would be adapted to fit the new constitution passed in 2014, which specifically treats women and men as equals.

This equality must consequently also be enforced in inheritance law, which in liberal Tunisia still follows Islamic principles. To do so, Essebsi set up a parliamentary commission, which originally wanted to submit a proposal for a new law in February.

Reactions to Essebsi's initiative varied. While the scholars at Al-Azhar University in Cairo were quick to describe it as an act that "goes against the teachings of Islam", the Supreme Mufti of Tunisia and the moderate Islamists of the Ennahda Party agreed to the proposal and forbade interference from Cairo.

The bill has yet to be presented to parliament, however. The Commission decided to delay making it public until after the local elections in May in order to keep the issue out of the election campaign.

Tunisia is thus still wrestling with the abolition of one of the last bastions of women's inequality before the law. And in Morocco, the debate will go on. Asma Lamrabet declared in her statement that she will by no means back down. "One phase may have come to an end," she writes on her website, "but I will carry on with my commitment, calmly and undeterred."

Home
Print
Newsletter
More on this topic
Islamic feminism in Morocco: "We have to re-appropriate the source texts"Moroccan feminism: Emancipation with the Koran?Qantrara dossier: Feminism in Islam
Related Topics
Feminism in Islam, Gender, Koran | Quran, Muslim women, Reform Islam, Rule of law, Women in the Islamic world
All Topics

Chinese President Xi Jinping's visit to Saudi Arabia in December 2022 may have rattled Washington, but it simply highlighted the Arabs’ desire to diversify their foreign relations ... END_OF_DOCUMENT_TOKEN_TO_BE_REPLACED

Nouara may be 65, but she is ready to join thousands of others who burn their ID and pay traffickers for the chance of a new life in Europe. Zineb Bettayeb reports END_OF_DOCUMENT_TOKEN_TO_BE_REPLACED

In Doha, Arabs from Morocco, Tunisia, Egypt and Algeria are gathering to celebrate the first ever FIFA World Cup to be held on Arab soil. The criticism from Europe? Over the top, ... END_OF_DOCUMENT_TOKEN_TO_BE_REPLACED

"Rebel Game: The Power of Football in the Middle East and the Qatar World Cup", an anthology published by Middle East researchers Jan Busse and Rene Wildangel, takes the upcoming ... END_OF_DOCUMENT_TOKEN_TO_BE_REPLACED

After a two-year hiatus, the Arab League re-convened at the beginning of November in Algiers against a backdrop of uncertainty and discord. By Pierre Boussel END_OF_DOCUMENT_TOKEN_TO_BE_REPLACED
Author:
Claudia Mende
Date:
Mail:
Send via mail

END_OF_DOCUMENT_TOKEN_TO_BE_REPLACED
Social media
and networks
Subscribe to our
newsletter