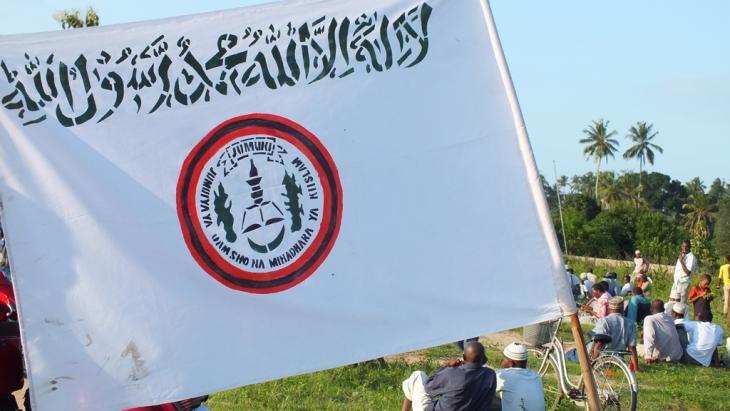 Islamism and Politics in Zanzibar

For the some hundred thousand tourists that visit Zanzibar each year, the island is paradise on earth. Yet, beyond the calm of its tourist venues, religious tensions on the island have been increasing. The attacks on churches, hate tirades by preachers, and leaflets inciting violence are but mileposts of a growing religious radicalization. Danja Bergmann reports

On 13 September 2013, a Catholic priest was attacked with acid. This took place only one month after world headlines reported on the acid attacks on two British volunteer teachers. In November 2012, Sheikh Fadhil Soraga, a moderate Muslim cleric and secretary of the Mufti of Zanzibar, also fell victim to this insidious series of attacks. Speculation on the reasons for these attacks invariably leads back to the name "Uamsho" (Swahili for "awake"). This is the name of a radical Islamic movement that for the past two years has been a driving force in advocating political independence for the semi-autonomous island.

Within the same timeframe, the Tanzanian government has lost considerable support of wide swathes of the population, which, in light of the upcoming parliamentary and presidential elections in 2015, is a cause for alarm among the country's political elite. 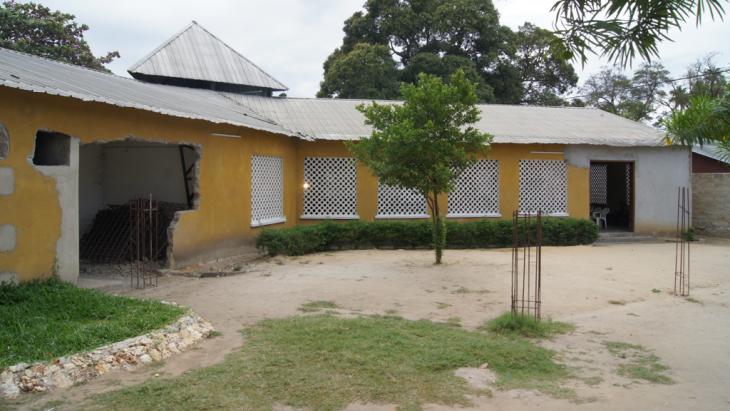 There is a rising tide of radicalism in Zanzibar once famed for its religious tolerance: During New Year's mass this year a violent mob stormed this compound near Stone Town and burned the church inside

In the past two years, there has also been an on-going process of constitutional reform in Tanzania. In the prelude to the reform plan of adopting a new constitution in April 2014, the issue of the political union of Zanzibar with Tanzania has been declared a taboo topic. The media and civil society organizations are not the only parties to have been caught up in the wake of the official position.

Religion as a projection screen

Uamsho appears to have benefited politically from the situation and has adopted the establishment of an independent state of Zanzibar as its cause célèbre. The political arena is particularly marked by power struggles and the fear of losing control. This has provided the perfect context for religion to be used as a projection screen and venue for confrontation.

Between 95 and 98 per cent of Zanzibar's population of 1.3 million are Muslims. The majority profess and practice a moderate form of the Islamic faith. There are many indications, however, that Zanzibar is experiencing a creeping social transformation in the direction of religious radicalization. The number of women who wear the veil, including the sort that completely hide the face, has been on the increase.

Whereas just a few years ago, many students from Zanzibar would apply to study abroad in Europe, Canada, and the USA, they now apply for scholarships from Islamic foundations to study in Saudi Arabia or Iran. While these observations may indicate purely external social changes, reports by visitors to the country of verbal abuse related to clothing considered to be "too Western" puts these changes in a different context.

In January 2012, a member of the island's parliament, the Zanzibar House of Representatives, tabled a proposal to chastise women wearing miniskirts during the month of Ramadan with corporal punishment. An even more direct language can be found in the flyers that circulated around the island last year spouting slogans of religious hatred and calls for violence against Christians. The numerous arson attacks that destroyed or severely damaged many churches last year should have served as a clear warning signal of this tendency. Local bars, numerous hotels, and stores that sold alcohol were also the targets of threats and attacks.

Uamsho first appeared on the political stage two years ago. Although registered in 2001 as an NGO, Uamsho was initially inactive in public. A turning point came only after the coalition of the opposition Civic United Front (CUF) with the Tanzanian governing party Chama Cha Mapinduzi (CCM) to form a government of national unity in October 2010. From this point on, Uamsho experienced a surge of popularity and the group made its explicit demand for the autonomy of Zanzibar. 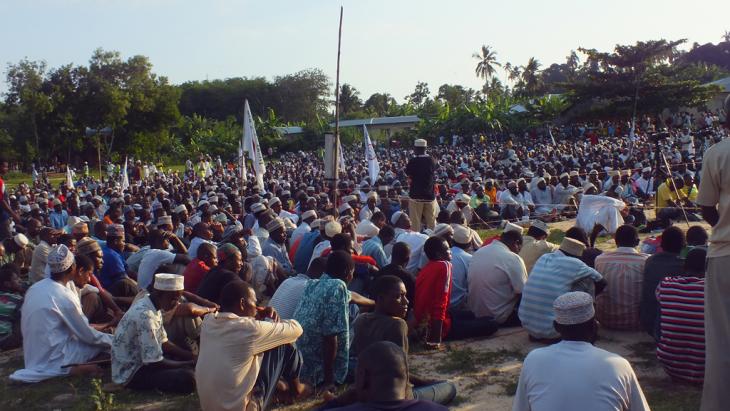 Increasingly hardline religious leaning: The Islamist group Uamsho wants Zanzibar to end its 1964 union with mainland Tanzania, which is ruled as a secular state, and introduce Islamic Sharia law in Zanzibar

This had previously been one of the central political planks of the CUF. The abrupt change of course by the CUF, which had long history of conflict with the CCM over unfair, violent, and falsified elections, was regarded by many in Zanzibar as a breach of trust. The situation was exacerbated in the final intensive months of the constitutional reform process, which in essence focused on the preservation of national unity. The Constitutional Review Act of November 2011 declared the issue of unity as sacrosanct and threatened all those who questioned it with draconian punishment.

Demands for a dress code for foreigners

Such vehemence only served to fire up long-simmering resentments in Zanzibar. By late 2011, public demonstrations organized by Uamsho had grown in size. Thousands had assembled for an open-air religious meeting featuring recitations of the Koran and sermons by the movement's religious leader, Sheikh Farid Hadi Ahmed. He began with demands for a dress code for foreigners, restrictions on the consumption of alcohol, and the establishment of an autonomous state of Zanzibar. Strategic propaganda was spread though flyers and a strong presence in social media.

The first violent clashes between Uamsho supporters and the police took place in the summer of 2012. These were sparked by the arrest of a radical preacher after a demonstration against the constitutional reform process failed to keep within its officially designated boundaries. During the period of unrest, three churches were set on fire and more than 30 protesters were arrested. Most Christians in predominantly Muslim Zanzibar originally come from the mainland, and, for this reason, some regard churches as a negative symbol of the undesired influence from outside the island. Violent conflicts again broke out in mid-October after Sheikh Farid Hadi Ahmed disappeard for three days under still unclear circumstances.

Although Sheikh Farid Hadi Ahmed and nine other top-ranking figures from Uamsho were jailed between October 2012 and January 2013 and no further public unrest has since taken place, tensions still remain high. One sign of this is that social inequity remains unchanged. Zanzibar faces many problems specific to the island and that differ significantly from those on the mainland. These include the illegal drugs trade, human trafficking, and the smuggling of goods. Unbridled corruption, high unemployment, an extreme income disparity, and crushing poverty have plagued the whole country for decades.

The most noticeable recent change has been an extraordinary economic boom in Tanzania with increasing growth rates of more than five per cent, from which, however, only the country's elite seem to have profited. This situation offers ample fertile ground for the emergence of a new generation of ideological religious leaders and radical supporters.

Tanzania has to reset its political course and interreligious dialogue is more necessary than ever before. Political concepts have to be developed in order to overcome the lack of knowledge, the misunderstandings, and the prejudices among the followers of the two major religions and to foster dialogue. In particular, moderate Islamic forces and partners in dialogue must first be found and subsequently supported.

It is regrettable, however, that while political leaders, policy-makers, and manipulators are caught up in a spiral of violence in Zanzibar, the boundaries between good and evil and the delineation of perpetrator and victim are becoming ever more murkier.

Danja Bergmann is the Coordinator for the Konrad Adenauer Foundation's Project "Islam in Africa".

Organised by interfaith NGO Religions for Peace, an international conference in Lindau on Lake Constance is dealing with the peace-building role of women inspired by the faith of ... END_OF_DOCUMENT_TOKEN_TO_BE_REPLACED

The small East African nation of Djibouti has so far evaded musical discovery by the West. Now, however, the country's official national band, Groupe RTD, is picking up ... END_OF_DOCUMENT_TOKEN_TO_BE_REPLACED

The end of July saw the launch of the African Union’s "Sauti" digital publication, the first young feminist platform in Africa, which this year showcases stories by female youth ... END_OF_DOCUMENT_TOKEN_TO_BE_REPLACED

The outpouring of solidarity worldwide following the violent death of George Floyd should prompt us to step back and fundamentally question racist structures and privileges based ... END_OF_DOCUMENT_TOKEN_TO_BE_REPLACED

Jeddah is very different from other cities on the Arabian Peninsula, says Ulrike Freitag, historian of the Modern Middle East. In her book "A History of Jeddah", she explores the ... END_OF_DOCUMENT_TOKEN_TO_BE_REPLACED

END_OF_DOCUMENT_TOKEN_TO_BE_REPLACED
Social media
and networks
Subscribe to our
newsletter