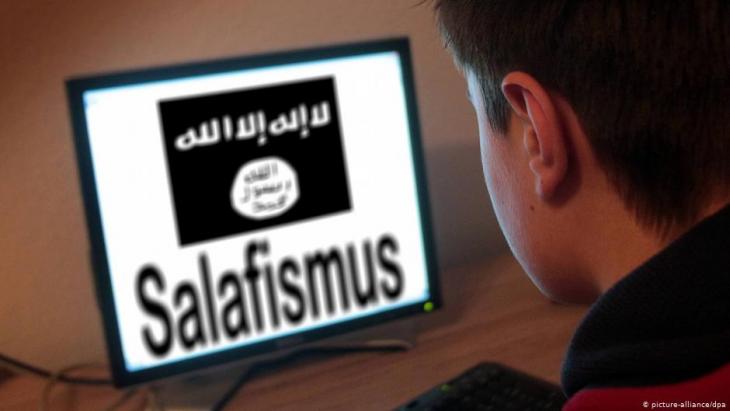 The state government of North Rhine-Westphalia is relying on wit and humour as an antidote to Islamist extremism. "Jihadi-Fool" is the name of a new YouTube channel targeting young people. By Louisa Wright

The comical "Jihadi-Fool" channel, launched in August at the Gamescom computer games trade fair in Cologne, is a sketch comedy format that in NRW Interior Ministry words "satirically addresses the absurdity of radicalisation, terrorism and Islamism," while the educational channel refers to the satirical videos and counters Salafist propaganda with facts. Over the course of a year, 32 satirical videos and 16 factual videos will be released through the €500,000 project.

In one of the episodes that is already online, a right-wing populist and an Islamist meet on the street. Both try to convince passers-by of their different world views, but suddenly discover that they have much in common in their homophobic and sexist views and join forces.

Another episode shows a fictional TV soap opera entitled "Goodbye Syria", in which a returned extremist tries to cope with the challenges of everyday life in Germany. He wants to open a shisha bar. When a friend expresses scepticism, he is stoned to death by the returnee – out of habit.

The channel's videos have been watched more than 11,000 times in total and have received mixed reviews: some viewers find them amusing, while others criticise the use of taxpayers' money.

NRW's Interior Minister Herbert Reul said in a press statement that the military defeat of the so-called caliphate of the Islamic State (IS) did not mean the 3,100 Salafist extremists living in Germany's most populous state had "vanished into thin air"."They are still active and use all channels on which they can find young people," Reul said.

He highlighted the importance of using the same online platforms to combat the radicalisation of young people. "A constitutional protection agency that takes its task of prevention seriously simply cannot opt out of being active on such platforms," Reul said. "We must go where our target group is."

Iranian author Fariba Vafi is adept at describing everyday scenes and concealing within them something ambiguous, in parts strange and grotesque. She writes novels – which have ... END_OF_DOCUMENT_TOKEN_TO_BE_REPLACED

Her grandparents are Jews – born in Tunisia and Algeria. Director Cleo Cohen has now broken the silence about this with a very personal debut. By Nadine Wojcik END_OF_DOCUMENT_TOKEN_TO_BE_REPLACED

Life imprisonment for crimes against humanity: that was the sentence handed down to Anwar Raslan in the world's first trial of a member of the Syrian torture system. Matthias von ... END_OF_DOCUMENT_TOKEN_TO_BE_REPLACED

Every year in December, the team at Qantara.de takes a look back at the articles that proved most popular with our readers. This year is no different. Here is a run-down of the ... END_OF_DOCUMENT_TOKEN_TO_BE_REPLACED

With his new album, "A Voice Keeps Calling Me", the Persian santur player Kioomars Musayyebi is building bridges from Iran across the Arab world to European early music. By Stefan ... END_OF_DOCUMENT_TOKEN_TO_BE_REPLACED

Former lawyer Said Haider has invented a chatbot for those seeking advice on anti-discrimination issues – Meta is the first chatbot of its kind in the world. In conversation with ... END_OF_DOCUMENT_TOKEN_TO_BE_REPLACED
Author:
Louisa Wright
Date:
Mail:
Send via mail

END_OF_DOCUMENT_TOKEN_TO_BE_REPLACED
Social media
and networks
Subscribe to our
newsletter