Skip to main content
Islamism in the Past and the Present

From Anti-Colonialism to Global Jihad

What are the roots of political Islam and what are the ideological tenets and goals of radical Islamic activists in Muslim countries? Franz Kogelmann provides an historic overview 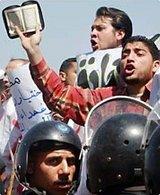 ​​No other phenomenon is making more headlines around the world than religious-political movements that proclaim to act in the name of Islam.

Up until a few decades ago, it was primarily just academics who were familiar with the religiously-inspired liberation struggles of Muslim societies during the colonial period. But that level of awareness changed in the late 1970s when religious leaders overthrew the regime of the Shah of Iran, drawing world attention to the revolutionary potential and mobilizing power of Islamic political movements.

Over the past few years, not only regimes and occupational forces in the Muslim world have been confronted with this phenomenon, but also Western countries to an increasing degree within their national borders.

Islamic political movements range from moderate factions that call for certain aspects of Islam to play a more active role in public life, to radical groups that launch terrorist attacks aimed at bringing down entire political systems of government. This wide range of activism is generally referred to as Islamism.

Present-day Islamism has its roots in the confrontation between Muslims and European colonial powers. In 1798, a French military expedition occupied Egypt, clearly demonstrating to Muslim leaders that they were no match for Europeans when it came to military matters. Many Muslims were quick to interpret this lack of military strength as an indication of economic, political, and finally even intellectual backwardness.

In addition to acquiring scientific knowledge from Europe, reform efforts aimed to shape the political systems of Muslim countries.

Reforms of the legal system greatly diminished the influence of Islamic law. Islamic institutions came under the control of a centralized state bureaucracy, making Islamic scholars directly dependent on the state.

In reaction to this overwhelmingly strong European influence that left many Muslims feeling powerless, Islamic leaders founded the Salafiyya movement in the late 19th century. This movement, which inspires Islamists even today, reveres the first generation of Muslims, called "the venerable predecessors" (as-salaf as-salih).

The two main leaders of this movement, Muhammad Abduh (1849-1905) and Rashid Rida (1865-1935), published a magazine called al-Manar, and soon discovered that it was the ideal medium to disseminate their reformist Islamic ideas to almost every corner of the Muslim world.

In their opinion, the first Muslim society should not be copied, but should serve as an inspiration to overcome the rigidness of present systems and to emulate Islamic teachings.

They felt that the relative weakness of Muslim societies was due to an erroneous understanding of Islam, and that the only way to overcome contemporary problems was to reinterpret Islamic sources.

In contrast to Salafiyya, whose original sphere of influence was largely confined to the elite in society, the creation of the Muslim Brotherhood in 1929 led to the first Islamist mass movement.

Hassan al-Banna (1906-1949), founder and first leader of the Muslim Brotherhood, defined Islam as an all-embracing "Islamic system" based on the Koran and the Sunnah, a universal system that could be applied everywhere and at all times.

However, al-Banna failed by and large to formulate a rigorous ideology. Key issues, such as how such an "Islamic system" could be concretely defined – aside from firmly anchoring Islamic law in public life – remained unresolved.

It was left to the Egyptian Sayyid Qutb (1906-1966) to work out a systematic ideology for the Muslim Brotherhood. Qutb was imprisoned for ten years, and his view of the world from behind bars became increasingly radical.

Inspired by the Indian-Pakistani Islamic scholar and political activist Sayyid Abul A'la Maududi, Qutb popularized in his writings a number of terms that he said were essential characteristics of an Islamic society. For instance, he wrote that the only legitimate rule was "the sovereignty of God" (al-hakimiyyah li'llah) and the "only being to worship is God" (al-'uboodiyyah li'llah).

One of the cornerstones of Qutb's ideological approach is the concept of "jahiliyyah," which describes the period of ignorance in pre-Islamic Arabian society. Qutb characterizes it in modern society as the transfer of political rule and law to the despotism of man, replacing the rule of God and His laws. Even if individual members of society are true Muslims, Qutb claims that society in general remains in an intolerable state of jahiliyyah.

This deplorable state, according to Qutb, can only be overcome by force in the form of jihad. In Qutb's writings, jihad becomes a revolutionary struggle for liberation, a religious war, a struggle for God, and a struggle to free people from oppression.

Many contemporary militant Islamist groups base their ideologies on the ideas of Qutb. One of the key tenets of this doctrine is the concept of an individual struggle for Islam, or against everything that is nonislamic, which even justifies the killing of unarmed civilians.

Although Islamic scholars have a multitude of interpretations for the term jihad, militant groups have reduced its meaning to an armed struggle, and even proclaimed it as the personal religious duty (fard 'ayn) of each and ever Muslim. Bombers who sacrifice their lives in suicide attacks are motivated by promises of sumptuous rewards in the afterlife.

Rise to power of the Islamists

Ever since numerous national modernization programs began to fail in the 1970s, the political leadership of Muslim states has come under increasing pressure from Islamist oppositional groups that use religious arguments to question the legitimacy of the power of the state.

As a result, significant emphasis is given to Islamic issues in political debates. This has had effects on a number of levels. Many rulers have moved into political arenas that until recently had been occupied only by Islamists.

To combat the influence of the Islamists, politicians have also enhanced the status of the Islamic establishment – a sector of society that is dependent on the state and despised by the Islamists. In some countries, moderate Islamists have been given an opportunity to establish legal parties that have enjoyed success at the polls in free elections.

When it comes to security issues, confrontation has intensified between the state and militant Islamists. There have been a rising number of terrorist attacks and the state has reacted with increasingly repressive measures.

One of the catalysts of this development was the war in Afghanistan in the 1980s. During the conflict, Muslim countries sent volunteer combatants to fight against the Soviet occupation. When the war ended, thousands of ideologically steadfast and battle-hardened Mujahideen returned to their home countries.

While the military struggles of these former Afghanistan fighters were largely limited to the confines of national borders during the 1990s, today's militant Islamist movements have taken on a global dimension.

Long-term stationing of Western troops in core Muslim countries, Western support for authoritarian regimes, and inequitable economic and political developments have lent weight to the arguments of Islamist demagogues.

From a Muslim perspective, the push for a global war on terrorism, coupled with Western campaigns to promote self-determination and democracy in Muslim countries, is perceived as nothing more than lip service.

Islamists argue that Western commitment to Muslim countries only serves to secure key natural resources. This reminds many Muslims of the era of European colonialism, when the Salafiyya movement inspired a struggle to liberate national territory.

Currently the Islamist threat is perceived as global, thus legitimizing a worldwide reaction. The fight against global Islamist terror, however, has essentially proven counterproductive. In addition, independent predictions on the continued development of militant Islamism are not particularly optimistic.

Militant Islamism
Giving Life to the Jihad
One global idea, many local terrorist cells. Al Qaida's attacks are a response to the vacuum created by the mainstreaming of Islamic movements. By Reinhard Schulze

END_OF_DOCUMENT_TOKEN_TO_BE_REPLACED
Social media
and networks
Subscribe to our
newsletter