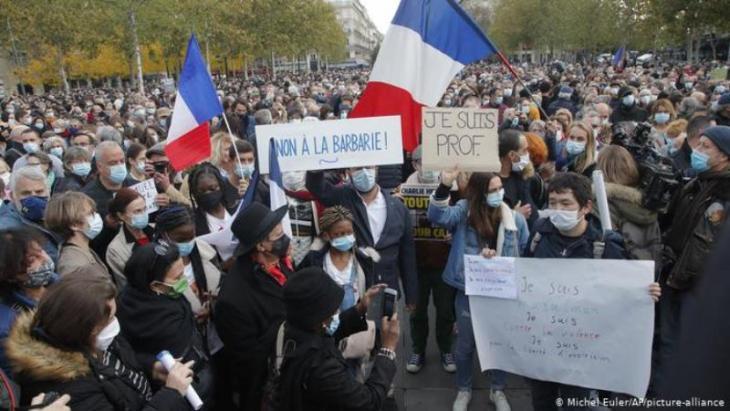 Islamist terror in France
The agitators are right next door

"Je suis Prof": in the wake of the horrific murder of teacher Samuel Paty, thousands of people took to the streets in cities across France in a show of support for the values of the Republic and in honour of the deceased. Details from Leo Klimm in Paris

The applause washes over the square. Like an acoustic Mexican wave, the clapping surges on the north side of the square and then moves over to the south side. The Place de la République is full of people; coronavirus doesn't scare them. What does scare them is the thought of France bowing to terror and allowing itself to be divided by religiously-charged hatred.

To stand close together, that's what they want on this Sunday in Paris, old and young, smart ladies carrying poodles, ordinary people, families. Some hold up placards featuring a cartoon of Mohammed and a single word in large font. That same word can also be seen on the top of the monument in the middle of the square: "Liberté".

Juliette has written "Je suis prof" on her mask, "I am teacher". The murder of the teacher Samuel Paty last Friday has left her shaken. "We were all at school once," says the architect, who only wants to give her first name. "We were all taught the importance of free speech."

Juliette says she is also here to resist the conflation of Islam and Islamism. She has come with a friend; they came to express their grief and process this latest shocking attack and to defend their country against the sinister, deadly Islamist ideology. 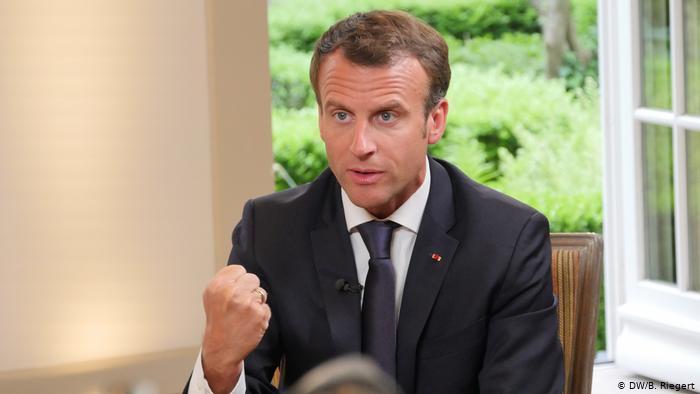 An attack that pierced the heart of the country

They came to uphold freedom of speech – this fundamental value of the French Republic that also includes the right to blaspheme against religion. Paty, 47, sought to teach this core value and paid for it with his life. Since the attack on the satirical publication Charlie Hebdo in January 2015, which left 12 people dead, French teachers were given special instructions from the schools' ministry to convey these values. This is what Paty was doing when he showed his students the controversial Mohammed cartoons from Charlie Hebdo.

In 2015, 1.5 million people gathered in Paris to protest against Islamism. Their slogan was: "Je suis Charlie". On this Sunday, the motto is "Je suis prof", an expression of the solidarity called for by Emmanuel Macron. The name of the president might have changed since 2015, but the watchwords used by both are similar: "They won't get through", Macron promises. "They will not divide us."

And yet the picture now is quite different to that of 2015. Since then, 259 people have died in France in Islamist attacks. While the country has not grown accustomed to this state of affairs, it has been gripped by fatigue. Pitting oneself against radicalised Muslims is draining – not least in schools, where Muslim students in some places refuse to take part in sports and biology lessons or dispute gender equality.

Fanning the flames of hate on social media

In contrast to 2015, the intellectual rabble-rousers are not in Syria or Afghanistan, but in France. They agitate on Facebook against a teacher who is then decapitated with a knife. Furthermore, unlike in 2015, this time politicians are arguing very little about failures in the wake of the killing.

There weren't 1.5 million people on the Place de la République on Sunday, but several thousand nevertheless. People joined rallies in many cities across the country at the weekend. At the secondary school in Conflans-Sainte-Honorine, where Paty taught, hundreds of people gathered for a vigil. Many people in the quiet suburb to the northwest of Paris knew Paty. He taught here, he lived here with his family, he was killed here on Friday. The mid-term break had just begun. 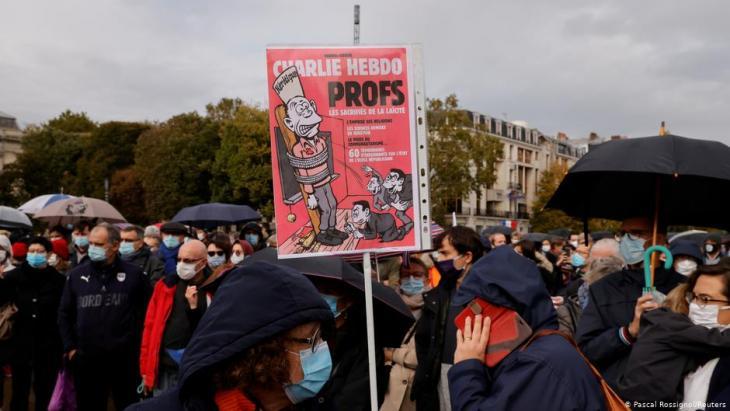 "In the long series of attacks that France has experienced, the one that targeted Paty is one of the most symbolically and emotionally charged. The attack seems like an attack on the institution of school itself, which in the understanding of the state fosters the integration of people of all backgrounds and religions," writes Leo Klimm. Pictured here, people marching in Lille in honour of Samuel Paty

In the long series of attacks that France has experienced, the one that targeted Paty is one of the most symbolically and emotionally charged. The attack seems like an attack on the institution of school itself, which in the understanding of the state fosters the integration of people of all backgrounds and religions. "There can be no doubt," says education minister Jean-Michel Blanquer, "we are dealing with enemies of the Republic." He added: "School is the backbone of the Republic."

People are especially shocked by the fact that it was in all likelihood the videos of an indignant father that incited the attacker, Abdoullakh A.The man denounced his 13-year-old daughter's teacher for the lesson he taught, gave his name and the address of the school. Some of the videos were shared by mosques and known Islamists. The murderer, it would seem, was agitated by people living in the heart of France.

The Paris anti-terror public prosecutor Jean François Ricard says Abdoullakh A. waited for Paty outside the school. He had never seen his victim personally but knew his name. "A. asked several students to show him who Paty was," says Ricard. Abdoullakh A. was born in Moscow in 2002, was of Chechen origin and lived as a recognised refugee in Normandy.

He had never come to the attention of the authorities as a radical Muslim, but was known to be violent. When police officers tried to apprehend him after the killing in Conflans, he was killed with nine shots. Public prosecutor Ricard says that A. fired on the officers with an air gun and attacked them with a knife. He had previously published a photo of Paty's severed head on Twitter. This was the revenge carried out on "the person who dared to humiliate Mohammed," he wrote. The account was quickly taken down.

Investigators are now searching for potential accomplices or accessories to the crime. Police detained 11 people at the weekend, including the perpetrator's parents and grandparents. The father of the student who posted his enraged video online is also being interviewed.

This coming Wednesday, Macron intends to honour Samuel Paty as a hero with a state funeral. "A hero?", says Juliette, the demonstrator on the Place de la République. "He wasn't a hero, he was just doing his job." What Paty did – teaching children about tolerance and democracy – should remain self-evident, she says. It shouldn't become a test of courage.

One year ago the Taliban returned to power, seizing Kabul; the U.S. and its allies made a panicked exit from the country. Of all the books written on the subject, four stand out ... END_OF_DOCUMENT_TOKEN_TO_BE_REPLACED

In "Iran. Die Freiheit ist weiblich", journalist Golineh Atai describes the dogged resistance of courageous Iranian women against the Islamic Republic and the mullahs who have ... END_OF_DOCUMENT_TOKEN_TO_BE_REPLACED

Unflattering terms were used at a German Football Association human rights congress aimed at "intensifying the discussion" ahead of the World Cup. One speaker in particular made ... END_OF_DOCUMENT_TOKEN_TO_BE_REPLACED

Egyptian authorities have Mada Masr in their sights once again after critical reporting. But the editor of the country's last independent news source is adamant they will continue ... END_OF_DOCUMENT_TOKEN_TO_BE_REPLACED

Like Christianity, Europe's history is one of migration. Both have strong roots in the Orient and in cultures thousands of years old. Cultural historian Bernhard Braun invites us ... END_OF_DOCUMENT_TOKEN_TO_BE_REPLACED
Author:
Leo Klimm
Date:
Mail:
Send via mail

END_OF_DOCUMENT_TOKEN_TO_BE_REPLACED
Social media
and networks
Subscribe to our
newsletter