Islamophobia and Anti-Semitism
Mechanisms of Exclusion and Discrimination

According to Wolfgang Benz, head of the Center for Research on Anti-Semitism at Berlin's Free University, there are structural similarities in the stigmatisation of Muslims and Jews. An interview by Claudia Mende 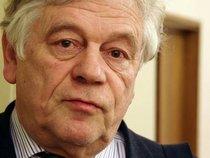 Professor Dr. Wolfgang Benz: "We seem incapable of understanding that prejudices, resentments and demonisation are always harmful and should never be used against any minorities."

​​Herr Benz, your article in the Süddeutsche Zeitung, which draws parallels between current Islamophobia and the Berlin Anti-Semitism Dispute in the 19th century, has caused some strong reactions. Has this surprised you?

Wolfgang Benz: I expected a reaction of the sort. Back in September 2008 when I organised a conference on the similarities between Islamophobia and anti-Semitism at the Technical University of Berlin, I could already see what I was setting in motion. Those who have been most critical of me on the Internet were not even present at the conference. Their reaction was simply a Pavlovian reflex. And some of them already knew before the event that they were going to condemn it.

Here we were comparing anti-Semitism and Islamophobia, for those people that amounted to a wicked sin. To some of the critics I was on a par with those who deny the Holocaust. To give way before a politically determined storm of outrage, however, would be contradictory to the spirit of scholarship

Why do you think the debate has been so virulent?

Benz: As a historian, I am not really qualified to offer such an explanation. It's up to the psychologists and psychoanalysts to explain why it is that we evidently need someone to demonise. We are dealing with a small but vocal group that seems to be concerned that the Holocaust could maybe lose its unique features, that Israel will be damaged.

Benz: It is assumed that anyone who shows understanding for Muslims is somehow turning away from Israel. Anyone who commits him or herself to trying to prevent the defamation of Muslim neighbours is automatically, according to this logic, an enemy of Israel and supporter of Iranian president Ahmadinejad. This is Manichean thinking, where the world is divided into good or evil. In fact, I have always clearly condemned the Islamist anti-Semitism espoused by Ahmadinejad or Mohammed Mahathir, the former prime minister of Malaysia. This just goes to show how little the debate has to do with reasoned argument. 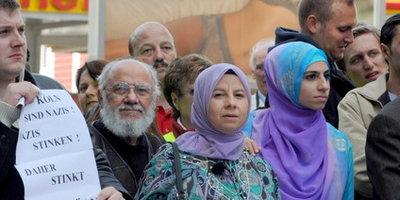 Protesting against anti-Islamic sentiments and the demonization of Islam: last year in Cologne several thousand people joined a peaceful demonstration against the anti-Islamisation Congress of the populist right-wing "Pro Köln" group

​​You talk about structural parallels between anti-Semitism and Islamophobia. But the stereotypes applied to Jews are not the same as those used applied to Muslims. Muslims, for example, are denigrated as being resistant to modernity.

Benz: But these are only differences of degree. The structural similarities in the stigmatisation of the respective minorities are greater. Part of the stereotype, for example, is the allegation of self-segregation, that is that the minority, supposedly, does not want to integrate and is happy to simply enjoy the advantages of living at the cost of the majority. These are alienation and conspiracy theories, like the notion that minorities want to take over our country or, as we have at the moment, to Islamise us.

In the 19th century it was the Jews, now, supposedly, it is Islam that is threatening the West. We attribute an otherness to the respective minorities, something which must not be taken away from them. They are the common attributes which prejudice can lock on to and build on.

Why don't you see any differences?

Benz: I am interested in the ostensible arguments that the majority society used against the Jews and what they are now applying to Muslims. To a large extent it is about ascribing attributes. This means that Muslims are in fact different from the Muslims that exist in the imaginations of those who are anti-Islam. Just as Jews are actually different to the idea of them that anti-Semites have.

I don't mean to say that there are no differences between Jews and Muslims. But the mechanisms of exclusion and discrimination are not only similar; they also share the same motivation. The majority in a society needs foreign minorities, someone to blame for the feeling of being threatened, their alienation and subjugation fantasies. This strengthens the cohesion of the majority society and helps it to find neat, tidy explanations and definitions for what is going on in the world.

In contrast to the 19th century, we live in a democracy nowadays. Have we really not made any progress? 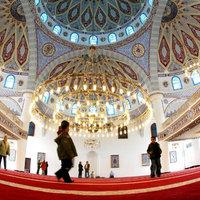 Thorn in the flesh of the right-wing populists: the "Pro NRW" group planned a protest demonstration to the Merkez Mosque in Duisberg last March

​​Benz: Enlightenment is a long, slow process. We have learned that Jews are now sacrosanct because we did horrible things to them. Apparently, however, this has not led us on to the next step, learning to respect other minorities, Muslims but also Sinti and Roma, or people who deviate from sexual norms for example. We've not reached that stage yet. We seem to have taken one step – though I as an anti-Semitism researcher am sceptical about whether or not the majority is really so enlightened.

If humanity was really so capable of learning, we wouldn't have anti-Semitism any more. We seem incapable of understanding that prejudices, resentments and demonization are always harmful and should never be used against any minorities.

But the public debate on Islam and Muslims in Germany has taken a more objective turn in the last few months.

Benz: I don't see it quite so positively. There is no indication of any change in thinking. Fortunately, some of the larger quality newspapers such as the Süddeutsche and the Frankfurter Allgemeine Zeitung are now giving a voice to reason – more a ray of hope than a breakthrough however. The debate still has a long way to go. It gets people aroused, feelings simply run too high. I fear that the next time there is a significant offence committed by a Muslim, let's say a so-called honour killing or something, we will suffer another setback.

Where would you draw the line between legitimate criticism and Islamophobia?

Benz: The kind of hostility towards Islam that some of its proponents refer to as criticism and others as Islamophobia is what we have when hate has replaced all argumentation and debate. What goes on in some blogs, for example, has nothing to do with argumentation and everything with discrimination. Negative qualities are simply attributed to Muslims as part of who they are. That is exclusion, not debate.

What can be done about this?

Benz: Education, debate and exchange of opinions are best. It has to be said, however, that there is as little chance of discussion and exchange with the hidebound enemies of Islam as there is with an anti-Semite. Usually these are people who feel themselves threatened and who often, though not always, are poorly educated, people who are ready to believe something without questioning it. But I am convinced that the majority in our society does not see a solution in propagated intolerance. For this majority the democratic values are the basis for consensus.

It is very important to keep the majority on this course, to strengthen them and to inform them about the way prejudices function and the effect it has. They need to understand the function of prejudices in order to improve human well-being and to be able to explain the world.

END_OF_DOCUMENT_TOKEN_TO_BE_REPLACED
Social media
and networks
Subscribe to our
newsletter