"Protecting Israel against Its Own Strength"

The Israeli sociologist Lev Grinberg is of the opinion that Israel's politicians always have one eye on American foreign policy. This is why preparations for the war against Gaza began the day Barack Obama was elected US president 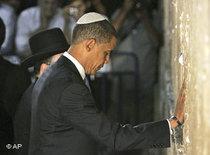 Barack Obama at the Wailing Wall in Jeruslam: The fact that Obama kept silent about Israel's aggression caused disappointment around the world, says Lev Grinberg

​​ Israel's offensive in Gaza was the government of Israel's farewell present to outgoing US president George W. Bush. "Israel's best friend ever" has supported it through every conflict and war, justified its aggressive moves, and prevented any international intervention against it. Bush awarded Israel the position of a central forward striker in his war on terror, thereby strengthening its most extreme right wing. With real friends like these, who needs illusionary enemies?

But Israel is not a satellite state of the US. It does try to accommodate US policy, but also to act according to its own agenda. Thus, for example, the eight years of "peace process" during the Clinton administration (1992-2000) were an Israeli initiative that bypassed and neutralized Clinton's mediation, just as the eight years of war and unilateral policy of the Bush era (2000-2008) began in Israel before Bush's inauguration.

Now too, Israel initiated the escalation in Gaza without anyone noticing, on November 4th, 2008, Election Day in the US. Israel's aggression cannot be understood without considering its timing, i.e., the "window of opportunity"; between Obama's election and swearing in.

I remember a conversation I had with the renowned late American scholar Charles Tilly, during his visit to Israel in May 2000. He asked me what is the political logic of the then Prime Minister Ehud Barak? I told him about his political "schedule": withdrawal from Lebanon in July, negotiations with the Palestinians completed in September, US elections in November.

It's not politics, but military logic

Tilly halted my speech, arguing that this is not political behaviour but military logic: giving ultimatums, avoiding negotiations, and then unilateral actions. He was right, in the peculiar democratic/military regime in Israel the politician/generals have acted unilaterally since then:

Withdrawal (from Lebanon, 2000) and redeployment (in Gaza, 2005), non-proportional violent reactions (In the occupied territories in 2000-2004 against the Intifada, in Lebanon and Gaza after the soldiers abductions in 2006, and now in Gaza), building the separation wall on its own account and illegally.

US presidential elections and a military schedule

All these are unilateral military moves, without recognition of the other, without negotiations. The US support is crucial; hence the presidential elections are part of the military plan schedule in Israel. 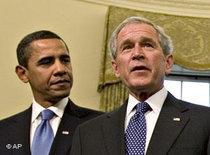 ​​The attack on Gaza was a continuation of the unilateral and aggressive policy of the last eight years, aiming to exploit the support of Bush administration while forcing President-elect Obama to take a position under crisis, immediately as he enters office. The move began on November 4th, 2008, when the Israeli Defence Forces, IDF, entered the Gaza Strip, blew up a tunnel and killed six Hamas men, thereby breaking four and a half months of Tahadia (ceasefire).

The Palestinians responded by firing Kassam missiles at Israel; in response, the IDF closed the border crossings and tightened the siege over the Strip. The siege has been kept ever since, so the Hamas government announced that the condition for renewing the ceasefire was lifting the siege and opening the crossings. Israel chose to regard the condition of opening the crossings as a refusal by the Hamas to renew the ceasefire.

"Repeating the mantra of 'self-defence'"

This is the heart of the conflict: Gaza is a huge prison controlled by the Israeli army, which prevents entry and exit of persons and goods, not only from the border crossings with Israel, but also from the Egyptian border, as well as by sea and air.

This deception by the government of Israel would not have been accepted if it hadn't been for the war on terror by President Bush, with the deception of the invasion of Iraq and the mass killing of civilians at its core.

Prior to the occupation of Iraq in April 2002, when the IDF recaptured the towns of the West Bank, killing hundreds of Palestinians and taking apart the institutions of the Palestinian Authority, there was harsh international criticism of Israel, and it was only at the Bush administration's intervention that a UN commission was prevented from arriving to investigate the massacre in Jenin.

Who is going to establish an investigative commission now? The Bush administration has managed to impose the war on terror over the entire world by bluntly ignoring global public opinion, but since then, Bush has remained in Iraq while Europe and the conservative Arab countries have gradually aligned with his policy. 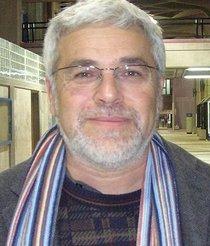 Grinberg: "Let us all hope that the war in Gaza is a farewell ceremony marking the end of President Bush's destructive era"

​​If there is anything resembling Israel's invasion of Gaza, it is the US occupation of Iraq, and if Israel manages to crush Hamas rule, as Bush has crushed Saddam Hussein's rule, it will not be able to get out of Gaza.

Many around the world were disappointed with Obama's silence during the first week of the Israeli aggression. Such disappointment is justified by the bad experience with the US policy in the Middle East, indeed since Carter's administration one cannot expect too much. If the new President continues Bush's policy, only with a Clinton-style improved image, it would be disastrous.

The threat of radical Islam

There is a strong link between Iraq and Gaza, and if the US's withdrawal from Iraq is not accompanied by a honest and viable Israeli-Palestinian agreement, then the threat of radical Islam could indeed reach Cairo, Tel-Aviv, Paris and London.

But there is another, more positive possibility. It's possible that Barack Obama understands the trick Israel is trying to pull, and therefore opted to be silent for as long as he has no executive powers. I hope that this is the case, and that upon beginning his office, Obama would behave as a true friend to Israel and save it from itself. He must stop Israeli aggression.

Israel's problem is an excess of military power stemming from the trauma of the Holocaust. Israel is behaving like the neighbourhood bully expecting someone to stop him, because it does have the power to destroy everything around it, while destroying itself in the process.

Anyone who sincerely wishes to help Israel must release it from its position as the central forward striker in the war on Islam, in which the Bush era of war on terror has framed it. Let us all hope that the war in Gaza is a farewell ceremony marking the end of President Bush's destructive era. It is indeed high time for the promised "change". Obama, yes you can.

Lev Grinberg is co-founder of the Arab-Jewish student movement of 1974. Today he teaches sociology at Ben Gurion University in Tel Aviv. His book, Politics and Violence in Israel/Palestine: Democracy versus Military Rule, will be published by Routledge in May.

Escalation of Violence in the Middle East
The Road Leads via Jerusalem
The latest escalation of violence in the Gaza Strip illustrates all over again: Hamas and Iran can only be weakened if the Palestinians finally have the prospect of a proper state. An analysis by Volker Perthes

Turkey's Role as Mediator in the Gaza Conflict
Dubious Diplomacy
As in other countries, Israel's attacks on Gaza have been greeted in Turkey with angry protests. Nevertheless, the government of Recep Tayyip Erdoğan is currently making every effort to mediate between the two sides. According to Can Baydarol, in doing so, it is protecting its own interests too

END_OF_DOCUMENT_TOKEN_TO_BE_REPLACED
Social media
and networks
Subscribe to our
newsletter