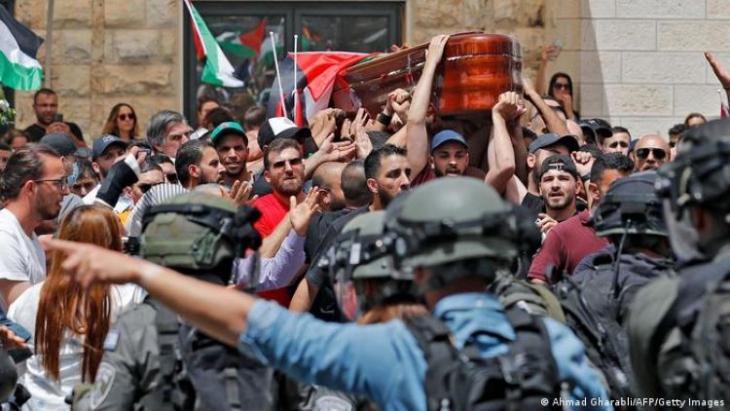 Israel is to conduct a ballistics test on the bullet that killed Al Jazeera journalist Shireen Abu Akleh, the Israeli army said on Sunday, a day after the Palestinian Authority handed the bullet to U.S. experts.

Israeli army spokesman Ran Kochav's comment on army radio came after the Palestinian Authority gave the green light for the U.S., but not Israel, to examine the bullet that killed Abu Akleh while the veteran reporter was covering an Israeli army operation in the northern West Bank on 11 May.

A Palestinian official, who requested anonymity, said the Israeli comment raised questions about whether the Palestinian Authority could "trust the Americans".

Speaking to army radio, Kochav said: "The test won't be American, the test will be an Israeli test with an American presence."

"We are waiting for the results, if we killed her, we'll take responsibility for it, and will be sorry for it. We are also sorry when people that are not involved are killed by Palestinian gunmen," Kochav also said.

Israel's army was not immediately available to provide further explanation of Kochav's remarks, including whether an Israeli ballistics test was already under way.

Palestinian sources in Ramallah have said they expected the test to be conducted at the U.S. embassy in Jerusalem, AFP reported.

Abu Akleh, who held Palestinian and U.S. citizenship, was wearing a vest marked "Press" and a helmet when she was killed.

The official Palestinian investigation found that the Qatar-based television channel's star reporter was killed after being hit by a bullet just below her helmet.

It found that Abu Akleh was killed with a 5.56 millimetre armour-piercing round fired from a Ruger Mini-14 rifle.

Investigations by the United Nations, as well as several journalistic probes, have found that the shot that killed Abu Akleh was fired by Israeli forces.

Despite those findings, Israel has maintained that she may have been hit by stray Palestinian gunfire.

The Israeli army has also said "that Ms. Abu Akleh was not intentionally shot by an IDF soldier".    (France24/AFP)

END_OF_DOCUMENT_TOKEN_TO_BE_REPLACED
Social media
and networks
Subscribe to our
newsletter