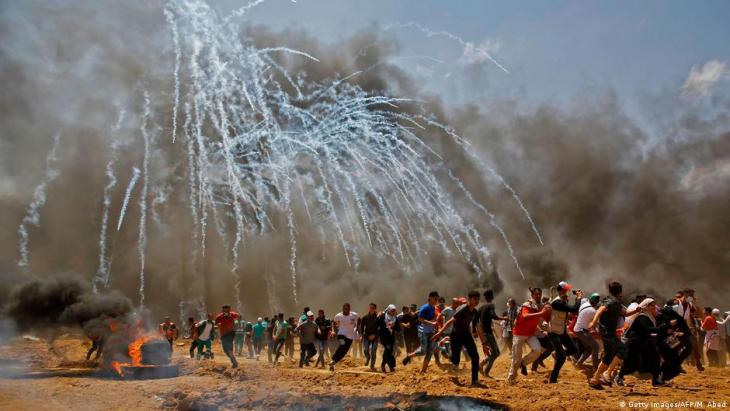 "The Memory Monster" was a success for Israeli author Yishai Sarid. His latest book hasn't been published in English yet, but given his reach among Anglophone readers, it won't be long before there's a publishing deal for this controversial new novel. Sarah Judith Hofmann read the book

There is a scene in this novel that could hardly be more Israeli. Mendi, an aged artist, sits in a moshav – a kind of kibbutz – and peels oranges that he has picked himself. It's quiet in the moshav; only Abigail, his friend and psychotherapist, is there. It's actually quite a romantic picture. But the two of them don't just chat aimlessly in the orchard. No, the artist tells of the people he once killed; and who now come to him in his dreams to take revenge on him. He reports – orange slice by orange slice – "how he killed, with the knife, by strangling and with the pistol, always silently at arm's length."

Yishai Sarid's new novel Minatzahat (literally: 'victorious') penetrates deeply into the psyche of soldiers and thus into the psyche of Israeli society. Because, in Israel, practically everyone has to do military service – men and women, for between two and three years. Only ultra-Orthodox and Arab Israelis are exempt from this duty. Since the establishment of the state – and before – Israelis have fought against their neighbours, against Egypt, Syria, Lebanon. And the ongoing conflict with the Palestinians in the occupied West Bank and the Gaza Strip.

"It is reality," says Yishai Sarid. "Israel recruits young people, almost children, 18 years old, and some of them have to go to combat units and kill from time to time. They grow up like my children: they are interested in their smart phones; they don't slaughter chickens with their hands, but instead buy them nicely packed in a supermarket. They are not any different from others. You have to train them to kill. This is both fascinating and tragic." 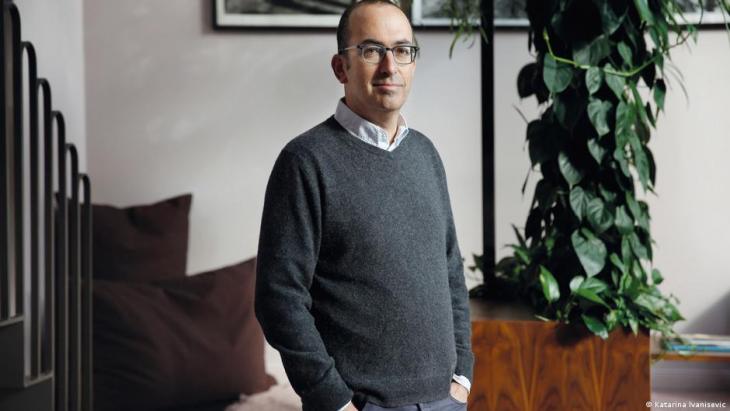 Not afraid of tackling sensitive issues: Israeli author Yishai Sarid is afraid neither of touching raw nerves nor of breaking taboos. His latest novel "Minatzahat" penetrates deep into the psyche of female and male soldiers

That is exactly what Abigail, the protagonist of the novel, address in her profession. As a psychologist for the Israeli armed forces, she gives lectures to officers, but is also sent directly to the front lines to speak to young soldiers who are traumatised by what they have experienced and yet often have to return to battle the following day.

"Psychology is an important part of armies nowadays. Not only in Israel. To teach young people to perfom well on the battlefield and to kill the enemy and not be killed," says Sarid. He himself was a member of the army and later became an officer in military intelligence. For his novel, he also did thorough research, read several studies on trauma in the Israeli and U.S. armies, and spoke to military psychologists.

"Most people have a hard time killing other people. Most are unable to do it. It's not a matter of morals, but of instinct. Especially when it comes to close range battle. Only a small minority are natural born killers. You have to train people to do it."

Mendi, the artist and former soldier of an elite unit in the novel, believed he was one of these "natural born killers". As a young man, he was assigned to terrorists, invaded their homes at night and killed them. He had fun killing, he told Abigail at one of their meetings. He almost felt a sexual pleasure.

"I didn't want to be sanctimonious," says Sarid. "It is a trauma for most everyone. But still there are people who like wars, who like to kill. War means breaking all restrictions of humanity. It is fun for some people. They have no problem killing people in a war. They are operating in cold blood. In ordinary life they would not be murderers. But war suits them."

Women are no exception. Part of Israeli feminism, said Sarid, is to show that women can kill just as much as men. Even if they are still not allowed into every combat unit. One of Abigail's patients is a helicopter pilot. She is plagued by the fear of being shot down and kidnapped. Here, the psychologist is even more driven to help the female pilot overcome her fear than she is with male soldiers. And, she is successful.

Abigail is rational, even cold-blooded, throughout the novel. During one of her lectures she says to a young officer: "(...) I know that the ones you killed were bastards who deserved it."

No mention of civilian victims 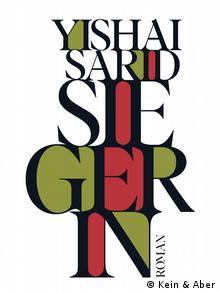 All victims are "terrorists": Israeli critics have pointed out that in Yishai Sarid's novel 'Minatzahat',"not a single incident is described that also mentions civilian victims. It is always terrorists, whose actions leave the soldier no choice but to kill, or be killed," writes Sarah Judith Hofmann

Sentences like these are probably why Sarid has had to weather criticism from the political left about his new book. He himself is one of Israel's "leftist" intellectuals, advocates a two-state solution to the conflict with the Palestinians and accuses Prime Minister Benjamin Netanyahu of stoking fear, even though Israel has long since acted from a position of strength in relation to hostile neighbouring states.

"Abigail loves wars and encourages people to kill," says the author. "I cannot come and say 'oh, what a terrible thing to kill other people; it should not happen.' We are doing it. We kill and we are being killed. So you have to take a stance that is not so judgemental about your protagonist. I took someone who is very active in it. And I like her."

In fact, the novel can be criticised for not describing a single incident that also mentions civilian victims. It is always terrorists, whose actions leave the soldier no choice but to kill or to be killed.

His previous novel, The Memory Monster, read as a bitter reckoning with the Israeli culture of Holocaust remembrance. Instead of going after the German perpetrators, Israeli youths direct their hatred against Poles and Arabs, Sarid revealed in a DW interview about that book.

Trauma of the Holocaust

In his new novel, Sarid doesn't mention the Israeli trauma of the Holocaust at all. And yet, according to Sarid, it naturally always resonates in the subconscious of the Israelis.

"It's the essence of Zionism to raise a Jew who can defend himself, unlike in the Holocaust," he says. "Nowadays, we are strong, not helpless anymore; but the psychology is still the one of the weak, battered child who has to find his or her strength in order not to be bullied again."

Most of the "operations" mentioned in the book are general references to battles and wars. But there is also a passage that obviously refers to May 2018 after the U.S. embassy was relocated to Jerusalem. At that time, Palestinians in Gaza regularly ran towards the border fence – some of them with incendiary devices or knives in hand. Dozens were shot dead by Israeli snipers.

"It was terrible," recalls Sarid. "When I write, I don't write from the perspective of a stranger. I live here, I was in the army, my older daughter is a soldier now. I cannot write like someone from Europe or from outer space. I am part of it. It is almost like I shot the gun myself. So as a writer I have to deal with that."

In the novel, during this particular mission, Abigail doesn't stay in the background. She accompanies the snipers to their posts, looks through a rifle scope and then lays her own finger on top of an officer's holding a gun – and ultimately pulls the trigger.

Home
Print
Newsletter
More on this topic
Breaking the Silence: The ″turncoat″ sons of IsraelIsraeli author Lizzie Doron on Independence Day: "Israel is facing crucial decisions"Interview with Amos Oz: ''I love Israel even in times when I don't like it''Assaf Gavron's novel "The Hilltop": Message of political reconciliation
Related Topics
Book reviews, History of the Near and Middle East, Israeli literature, Literature, Middle East peace process, U.S. policy in the Middle East
All Topics

German Middle East analyst Guido Steinberg and television journalist Ulrich Tilgner have both published new books on the conflicts in the Middle East. Their analyses and their ... END_OF_DOCUMENT_TOKEN_TO_BE_REPLACED

In his latest documentary, "The First 54 Years", Israeli director Avi Mograbi demonstrates how catastrophic and traumatising the occupation has been, not only for Palestinians, ... END_OF_DOCUMENT_TOKEN_TO_BE_REPLACED

FIT TLV is the latest initiative by Tel Aviv’s youth to keep on partying during the coronavirus crisis. FIT describe themselves as "Free. Individuals. Together" – cycling, ... END_OF_DOCUMENT_TOKEN_TO_BE_REPLACED

In 2012, fed up with people expressing clear-cut opinions on the rights and wrongs of the Middle East conflict, Canadian conflict researcher and long-time Israeli resident Corey ... END_OF_DOCUMENT_TOKEN_TO_BE_REPLACED

The Islamic Republic of Iran has been subject to sanctions ever since its creation in 1979. The more the regime has entrenched itself and expanded its power in the region, the ... END_OF_DOCUMENT_TOKEN_TO_BE_REPLACED

Given that the political landscape in Israel is once more expected to shift to the right in the upcoming general elections, philosopher Omri Boehm argues in his forthcoming book ... END_OF_DOCUMENT_TOKEN_TO_BE_REPLACED
Author:
Sarah Judith Hofmann
Date:
Mail:
Send via mail

END_OF_DOCUMENT_TOKEN_TO_BE_REPLACED
Social media
and networks
Subscribe to our
newsletter