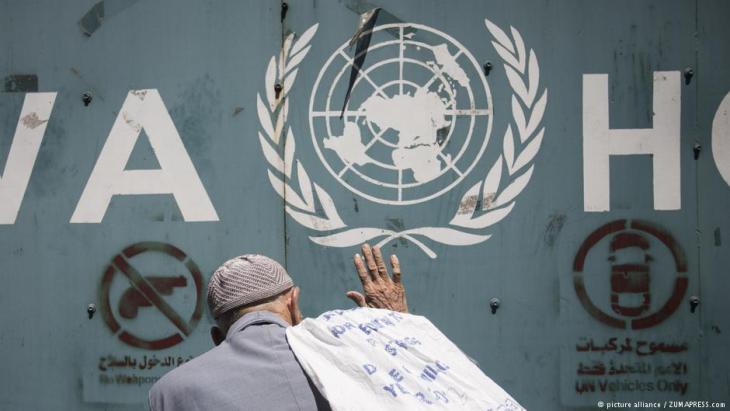 UNRWA, the relief agency for Palestinian refugees, is feeling the crunch since the United States, its main donor, slashed its contributions. The crisis comes amid a military escalation between Hamas and Israel. Tania Kraemer reports from Gaza

A determined Suleiman Abu Oudeh makes his way through the busy UNRWA distribution centre in the Al-Shati refugee camp in Gaza City. With his ID card and coupons in hand, he gets in line where food items are being handed out.

"Of course, everyone here is worried and knows that UNRWA is in a difficult situation," says Abu Oudeh, accepting a box of sunflower oil once he reaches the counter. "People are worried that rations might be cut in the long run. It has happened before. The situation in Gaza is so bad. There is no work and many are completely dependent on help."

Although food distribution is by no means under threat at the moment, the organisation's financial crisis hangs like a dark cloud over all of its services. In mid-January, U.S. President Donald Trump announced his administration's intention to drastically reduce payments to the relief organisation.

The move came after Trump had recognised Jerusalem as the capital of Israel in December, a move that angered Palestinians and led them to scale back communication with the Trump administration. The U.S., which had been the largest donor to UNRWA, slashed its annual $360 million (€310 million) contribution by more than 80 percent to $60 million.

UNRWA depends on continued funding to support 5 million Palestinian refugees across the Middle East. Even though other countries stepped in to help fill the gap, UNRWA has been left in a financial crunch. In Gaza alone, the organisation supports 1.3 million registered refugees through schools, health centres, social services and food aid. 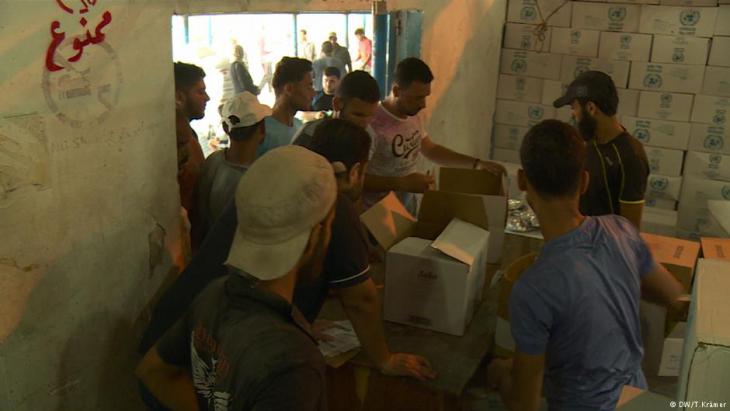 Conditions in Hamas-controlled Gaza have been deteriorating for over 10 years: the small enclave has been sealed off by Israel and Egypt, a policy that has crippled its economy and severely restricted the ability of Gazans to move in or out.


Later Abu Oudeh arrives at the area where bags of flour are handed out. At other counters, cans of sardines, lentils, chickpeas and rice are packed into bags. The amount they receive is barely enough to last a family through the three-month distribution intervals, but it's a big help in everyday life, says the 57-year old. Abu Oudeh has a family of seven and would rather work than stand in line at the distribution centre. Outside donkey carts and cars are waiting to transport the heavy bags of flour to the Al-Shati camp nearby for a small fee.

Everyone seems worried by reports that the U.S. may want to see the relief organisation dismantled. Aside from providing aid, UNRWA also symbolises the continued recognition by the United Nations that the Palestinian refugee issue still awaits political resolution. To Palestinians, UNRWA's dismantlement would threaten to diminish their stake in the issue of the right of return to what is now Israel, one of the thorniest issues in the Palestinian-Israeli conflict.

Hamas in Gaza, the Palestinian Authority in the West Bank, and Israel: Palestinians have fewer and fewer rights, says Khaled Elgindy. The Middle East could escalate at any time. ... END_OF_DOCUMENT_TOKEN_TO_BE_REPLACED

Joe Biden promised to make democracy and human rights central to US foreign policy. But that means not insisting on Israel's right to defend itself without mentioning its ... END_OF_DOCUMENT_TOKEN_TO_BE_REPLACED

As the Biden administration attempts to promote democracy and human rights in the Middle East, it will confront the deep-seated belief among Arabs that U.S. policies are unfair to ... END_OF_DOCUMENT_TOKEN_TO_BE_REPLACED

Ben Aylon’s debut international album sees him elevate the traditional music and instruments of Senegal and Mali into a fresh contemporary setting. Seven years in the making, " ... END_OF_DOCUMENT_TOKEN_TO_BE_REPLACED

Years ago, the International Holocaust Remembrance Alliance formulated how hatred of Jews can be recognised. Now a new definition is causing controversy. By Sarah Judith Hofmann END_OF_DOCUMENT_TOKEN_TO_BE_REPLACED

When it comes to talent, Palestine may well be able to compete with other football teams in the region, but growth and development are hampered by the situation in the Palestinian ... END_OF_DOCUMENT_TOKEN_TO_BE_REPLACED

Comments for this article: U.S. aid cuts bite in Gaza

What a shame for all the rich islamic states - Saudi-Arabia and Iran especially - that the US had to be, until now, the largest contributor to the UNWRA. The so often acclaimed Islamic solidarity appears a hollow slogan.

END_OF_DOCUMENT_TOKEN_TO_BE_REPLACED
Social media
and networks
Subscribe to our
newsletter