Concerned about the Dignity of the Palestinians

An organization of Israeli women spent six years monitoring activities at Israeli checkpoints. What motivates these women to monitor the men who are supposed to be protecting them? Beate Hinrichs reports

Yehudit Kirstein Keshet and other Israeli women like her have spent six years monitoring activities at Israeli checkpoints leading to the West Bank. What motivates these women to monitor the men who are supposed to be protecting them? Beate Hinrichs reports 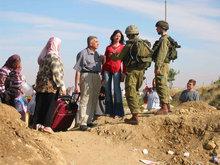 At the checkpoints, Israeli soldiers exert arbitrary control over Palestinians. Israeli women have decided to act as monitors

​​Every morning, Jewish women from Israel set out for the military checkpoints on the border with the West Bank, where Palestinians wait in long queues in the hope of being allowed to pass. Over the course of several hours, these women observe and take note of the way Israeli soldiers treat the Palestinians and whether they allow them to pass or turn them away.

Sometimes they are able to help the sick or those who have been turned away. These women are members of the human rights organisation MachsomWatch (CheckpointWatch).

Curfews, border closures, and the wall

The Hebrew word "Machsom" (barricade or control point) is the term used for the checkpoints dotted along the border with the West Bank, which severely restrict Palestinian freedom of movement.

The Israeli roadblocks, checkpoints, and terminals - some of which are staffed by soldiers, some of which are unstaffed - have separated neighbouring villages and have carved up villages, cities, and whole swathes of land within the Palestinian territories. The situation is exacerbated by curfews, border closures, and the wall, which not only separates Israelis and Palestinians, but also keeps Palestinians apart.

Only those who have gone through a complicated application procedure and been granted a permit are allowed to pass. Human rights violations and degrading treatment are par for the course. All of this combines to create a system that allows the Israeli army to exercise arbitrary control over the Palestinian population.

​​By forcing them to stand in line and wait day in, day out, this system is robbing the Palestinians of a precious, irreplaceable resource: time.

This is how Yehudit Kirstein Keshet describes the situation in her book CheckpointWatch. The author is one of the founding members of MachsomWatch.

In February 2001, five women set out to see for themselves what was going on at the checkpoint in Bethlehem. What they saw beggared belief: pregnant women forced to give birth on the side on the road because soldiers would not allow them to pass.

Humiliation at the checkpoints

Today, about 500 Jewish Israeli women regularly observe what goes on at the checkpoints. Most of them are middle-aged, educated, left-wing liberals, members of the middle class who emigrated from Europe and are employed. Many of them have been shaped by the holocaust and are concerned about both the dignity of the Palestinians and the moral state of Israeli society.

According to Yehudit Kirstein Keshet, they have set themselves the task of bearing witness to the humiliation and oppression at the checkpoints so that they will also be able "to testify at future war crimes trials and to make our contribution to the construction of a collective memory."

Heightening awareness of human rights violations and anchoring these abuses in the collective memory of Israeli society is the hidden theme of Keshet's book.

The MachsomWatch women have not restricted the public relations work that is so central to achieving this goal to Israel alone. Roni Hammermann, who has been with the group since day one, regularly lectures interantionally on the checkpoint system.

"When we began our work six years ago," she says, "no-one apart from us and the military knew what was going on there. Today, everyone in Israel knows that a checkpoint is a bad thing."

However, most Israelis believe that the checkpoints are essential for their country's security. "We always invite the public to spend three hours of an afternoon with us at a checkpoint so that they can see for themselves what is happening in their name," says Hammermann, "so far, not one single person has gone away unmoved."

Since its inception, MachsomWatch has been the exclusive reserve of women. In Israel's militarised society, it is easier for women to confront soldiers at the checkpoints. Hammermann also says that women are more patient: "We have taken men with us to the checkpoints in the past and on occasion, brawls have broken out between them and the soldiers within two minutes."

Is what the MachsomWatch women are doing humanitarian aid, an attempt to make conditions at the checkpoints more bearable, thereby trivializing the occupation? Or is it political involvement and a criticism of the system? This is a hotly debated issue within the group itself.

Some of the women are involved primarily out of concern for the morals of Israel's sons, the young soldiers at the checkpoints; as mothers, these women feel particularly entitled to voice criticism.

For radical left-wingers and feminists like Yehudit Kirstein Keshet and Roni Hammermann, on the other hand, it is all about human rights and showing political solidarity with the Palestinians. They hope that their work will build "not only a shield to protect against even worse abuses, but also a bridge for future reconciliation."

END_OF_DOCUMENT_TOKEN_TO_BE_REPLACED
Social media
and networks
Subscribe to our
newsletter