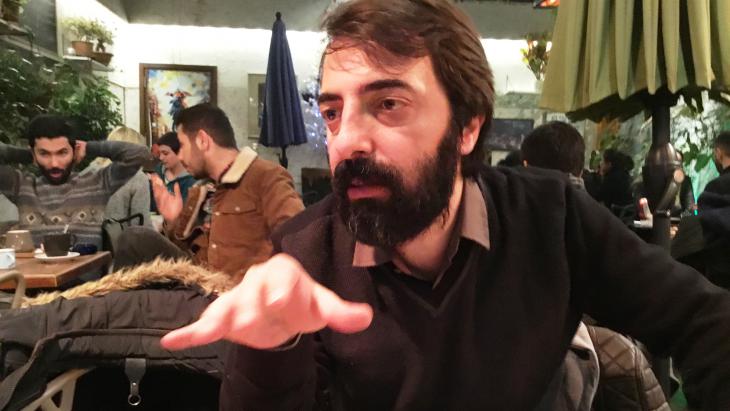 Author and translator Kawa Nemir has just finished translating James Joyce′s masterpiece of Irish literature into the Kurdish language of Kurmanji. His aim? To build bridges between the Kurdish culture and world literature. By Tom Stevenson and Murat Bayram

Kawa Nemir, the prolific author and translator of English-language classics into Kurmanji has spent more than five years answering these questions. Last year, Nemir completed the first full translation of Joyce's Ulysses in Kurdish and is set to publish the text through the Istanbul-based Everest publishing house later this year.

"It was frankly very difficult, but also a lot of fun. I have a great love of Joyce and I think that was absolutely necessary in order to finish the job," Nemir said in a recent interview in Istanbul during a lecture tour.

The translation was a trial not only for Nemir, but for the Kurdish language itself, which has a centuries-long literary tradition of epic poetry but is not known for its avant-garde modernism. Nemir began his translation on 16 June 2012 and finished late last year.

That a full translation has taken so long is less a product of Ulysses’ obscenity than its complexity. The novel is so notoriously unconventional that during the Second World War elements of the British state came to believe it must be a pre-arranged pro-German tract written in code. 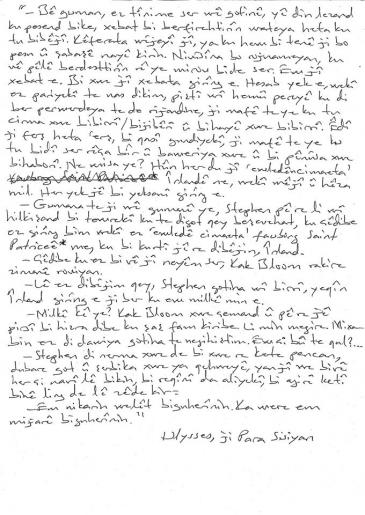 A pageant of different textures and registers: James Joyceʹs classical references meant seeking analogies in the classical literary Kurdish of the 17th century poet Ahmed Khani, forcing Nemir to push the borders of his own linguistic knowledge. Moreover, Joyceʹs extensive use of slang and idiom necessitated an exploration of popular Kurdish slang, an area Nemir claims is under-explored

″It′s my grand' oeuvre,″ he said. ″Even translating Shakespeare′s plays and sonnets was really only a preparation for translating Ulysses.″

Born in Igdir, a majority Kurdish province in eastern Turkey, Nemir now lives in Mardin in the south-east. As well as having written six volumes of his own poetry, he has published 25 translations of English works in Kurdish, including works of Shakespeare, T.S. Eliot, Emily Dickenson, William Butler Yeats, Sylvia Plath, and Walt Whitman.

A book tour that began in Van last December took Nemir to the cities of Batman, Diyarbakir and Ankara, and culminated in the author speaking at Istanbul′s Bogazici University.

The current political climate in Turkey is fraught, particularly for Kurds and expressions of Kurdish culture. Over the past three years the country is generally considered to have undergone a marked rise in authoritarianism accompanied by a bloody military campaign in the predominantly Kurdish south-eastern provinces and a large-scale government crackdown on political dissent.

Nemir′s lecture tour was not immune to the difficulties of this climate. At his reading in Van, plain clothes police officers showed up and the event′s organisers were given to understand that the word ″Kurdistan″ should not be uttered.

In Syria, Iran, and Iraq, the conditions for Kurdish culture are also beset by war and repression. ″Our generation feels afraid and many have either already left or are planning to leave the region. Those who stay aren′t creating much because we′re all at risk.″

In south-eastern Turkey the conditions are especially harsh. According to Nemir, the small Kurdish literary society that was emerging there just a few years ago now feels directly threatened by the government crackdown.

″They′ve taken a lot of our friends as political prisoners, our websites and forums are monitored and we′re not free to write anything on Twitter for example,″ he said. ″The last two years have been the hardest time of our lives.″

Nemir studied – and has translated from – both English and American literature, but he sees parallels in the Irish literary tradition that are valuable to Kurds today.

″The colonial experiences of Kurds and the Irish bears some similarities,″ he said because of the shared history of British invasion and occupation. ″Of course Irish literature has Swift, Wilde, Joyce, and all those great names. In terms of the status of world literature Kurdish isn′t similar, but I think there is a kind of bridge between the two languages and nations despite their great geographical distance from one another.″

Welcome to the stream of consciousness

The pageant of different textures and registers in Ulysses demanded that Nemir push the borders of his knowledge of his own language. The book′s classical references meant seeking analogies in the classical literary Kurdish of the 17th century poet Ahmed Khani. And Joyce′s extensive use of slang and idiom necessitated an exploration of popular Kurdish slang, an area Nemir believes is under-explored. 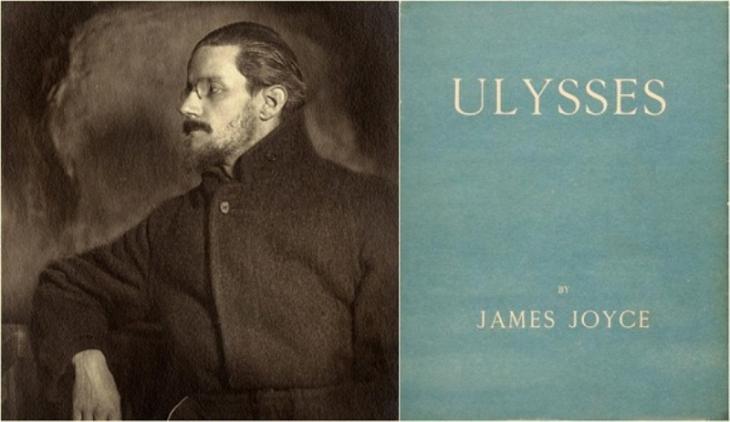 The entire modernist literary movement in a nutshell: since its publication, "Ulysses" has attracted controversy and scrutiny, ranging from the 1921 obscenity trial in America to some protracted textual "Joyce Wars". Ulysses' stream-of-consciousness technique, careful structuring and experimental prose – full of puns, parodies and allusions – as well as its rich characterisation and broad humour, have led it to be regarded as one of the greatest literary works in history

″'Ulysses' gives us the opportunity to use everything we have, to play with our own language and national dictionary and to explore traditions that are new to Kurdish literature such as stream of consciousness,″ Nemir said.

Ulysses is challenging enough in its original form and Nemir wants Kurdish readers to get the most from his translation, so he is also preparing a reader′s guide in Kurdish that will explain some of the references, the Kurdish slang choices and introduce the novel to new readers.

Kurdish literature, while acknowledging its own history, needs to come into closer contact with the triumphs of world literature, Nemir says.

Having translated Ulysses, Nemir is now looking to promote a newly published collection of his own haikus written in Kurmanji. With the aim of building another long bridge for his fellow Kurds to another new tradition, Nemir is about to embark on another odyssey across snotgrean seas.

Home
Print
Newsletter
More on this topic
Kurdish artists in Diyarbakir: "No room to breathe anymore"Interview with Kurdish author Bachtyar Ali: "I only exist where my words take flight"Kurdish in exile: The right to a mother tongueKurdistan′s Book Cafe: In praise of female entrepreneurs
Related Topics
Kurdish-Turkish Conflict, Kurds, Literature
All Topics

Bachtyar Ali sends the hero of his latest novel – "Mein Onkel den der Wind mitnahm" – literally flying. Jamshid is so thin after his years as a political prisoner that a gust of ... END_OF_DOCUMENT_TOKEN_TO_BE_REPLACED

In this essay, renowned Lebanese journalist and writer Hazem Saghieh asks whether the Arab Levant, which stretches from Iraq in the east to Egypt in the west, will remain an ... END_OF_DOCUMENT_TOKEN_TO_BE_REPLACED

More and more voices are being raised in Turkey that challenge previous versions of the country's history. These alternative accounts, still largely ignored by official quarters, ... END_OF_DOCUMENT_TOKEN_TO_BE_REPLACED

Extreme drought in Iraq has given German and Kurdish archaeologists the unique chance to examine an ancient Bronze Age city that was hidden beneath the water of a reservoir for ... END_OF_DOCUMENT_TOKEN_TO_BE_REPLACED 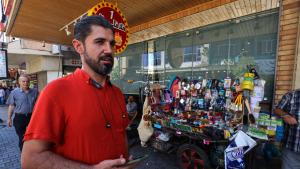 Iraqi Kurd Haresh Talib says he struggles to get paid and his children's schooling is disrupted in his conflict-riddled country, so he wants to try to flee with his family to ... END_OF_DOCUMENT_TOKEN_TO_BE_REPLACED 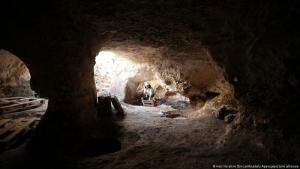 Welcome to the underground! In Midyat, Turkey, the gateway to a huge underground city has been discovered. It was used for over 1900 years and could accommodate up to 70,000 ... END_OF_DOCUMENT_TOKEN_TO_BE_REPLACED
Author:
Tom Stevenson and Murat Bayram
Date:
Mail:
Send via mail

END_OF_DOCUMENT_TOKEN_TO_BE_REPLACED
Social media
and networks
Subscribe to our
newsletter