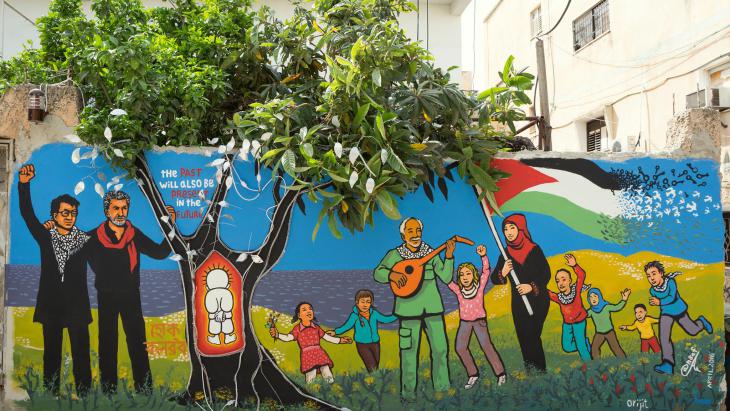 What′s next for ″cultural resistance″?

Last week, local and international artists and activists converged on the Jenin refugee camp for a week of workshops, talks and performances to mark the 10th anniversary of the Freedom Theatre. A report by Ylenia Gostoli

Based in camp itself, the Freedom Theatre is one of the best-known Palestinian cultural institutions, particularly abroad. The festival opened on 4 April with a silent march to protest the unsolved murder of Juliano Mer Khamis, one of the theatre′s co-founders, who was assassinated exactly five years ago.

The assassination of its ″spiritual leader″ dealt a huge blow to the theatre, whose members were then subjected to a campaign of harassment and arbitrary arrests. Another of the theatre′s co-founders, Zakaria Zubeidi, a former fighter in the Al Aqsa Martyrs′ Brigade, an armed wing of the Fatah political party, spent three years in ′safe custody′ in PA prison after Israel revoked his amnesty.

Originally from Nazareth and the son of Palestinian writer Saliba Khamis and Jewish activist Arna Mer, Mer Khamis′ project was a radical, not a philanthropic one. He didn′t see culture as a substitute for other forms of resistance. Rather, his aim was to make real theatre, real art, in perhaps the most unlikely of places. 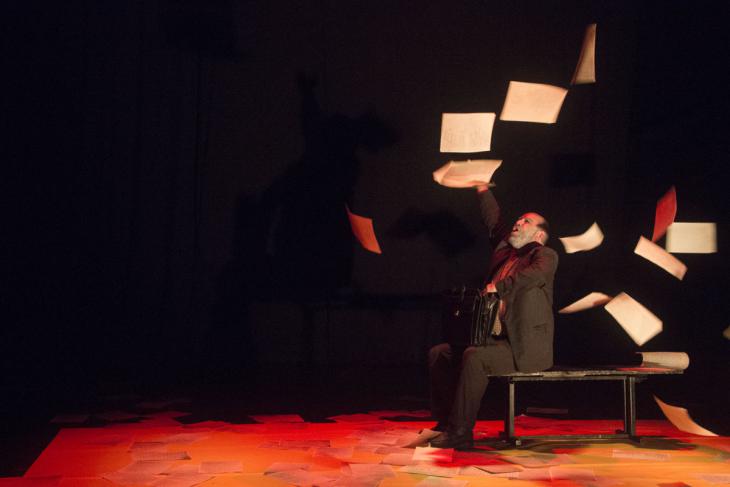 ″[Mer Khamis] didn′t want to make a social theatre, but real art,″ Hlehel explained. ″Cultural resistance is what Juliano had here. It means making the change inside our society. Because we can′t really influence the other side. We should concentrate on changing our society - and give them the opportunity to rethink things and to open their minds″

Conservative sectors of society in the Jenin refugee camp have not always welcomed the presence of the theatre there; over the years it has been subject to a number of attacks. As Nabil Al-Raee, the theatre′s artistic director, put it in a previous interview with Qantara, it′s been ″a love-hate relationship.″ The theatre, which offers a three-year drama course, has trained many now successful young artists from the camp and elsewhere in the West Bank. It has also staged and toured more than 20 productions.

The festival brought together former students and artists who had previously collaborated with the theatre and well-known Palestinian performing art groups, including the Jerusalem-based Quds Arts and the Palestinian Circus School.

A 20-day ″cultural resistance forum″ saw the participation of prominent intellectuals such as Israeli historian Ilan Pappe, Palestinian author and professor Mazin Qumsieh and Omar Barghouti, author and co-founder of the BDS (Boycott, Divestment and Sanctions) movement, discussing the role of culture in the context of the Palestinian struggle.

″This is a typical colonial, anti-colonial struggle. If one agrees with this ′diagnosis′, the classic situation is that the coloniser wants to wipe out not only the presence of native people, but also their culture,″ Professor Qumsieh, who gave the forum′s opening lecture, commented. ″Establish a new society, a new version of it, something new which cannot exist without wiping out the old.″

″However, we shouldn′t do art just in opposition to something else, but because it is intrinsically valuable.″

Amer Hlehel, an actor and writer based in Haifa, performed at the Freedom Theatre′s opening night ten years ago. He took part in the festival with ″Taha″, a solo show he wrote and directed, based on the life of the Palestinian poet Taha Muhammad Ali. He recalls that this was precisely Juliano′s aim when he established the Freedom Theatre. 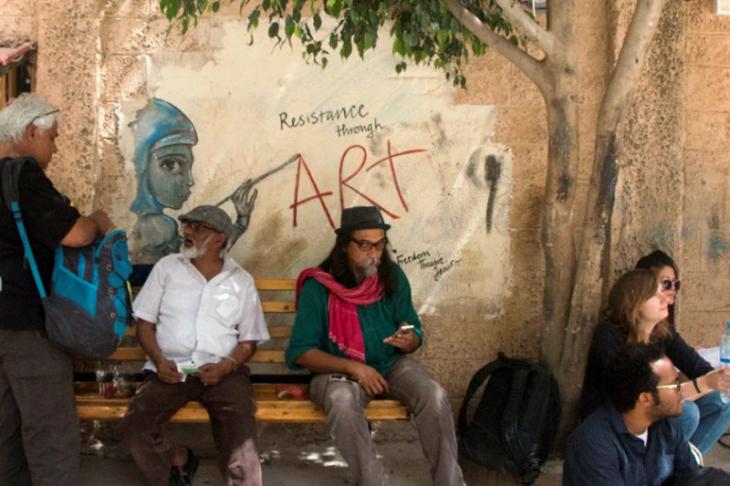 As the forum's opening lecturer, Professor Qumsieh, commented, "″This is a typical colonial, anti-colonial struggle. If one agrees with this ′diagnosis′, the classic situation is that the coloniser wants to wipe out not only the presence of native people, but also their culture"

″He didn′t want to make a social theatre, but real art,″ Hlehel explained. ″Cultural resistance is what Juliano had here. It means making the change inside our society. Because we can′t really influence the other side. We should concentrate on changing our society, and give them the opportunity to rethink things and to open their minds,″ he said.

The ″project of liberation″

Mer Khamis′ legacy seemed to transcend the practicalities of keeping the theatre running despite his absence – as well as any criticism directed at its current management.

In his intervention at the forum, Ilan Pappe reflected on Mer Khamis′ project in relation to what he called the Palestinian ″project of liberation″ and to his well-known position in favour of a one-state solution with full equality for all citizens.

″The project of liberation has to go through a redistribution of resources, including a scenario where a Palestinian return could change some of the demographics,″ said Pappe. ″Now this is something that most [Israelis] who talk about a one-state solution cannot envisage. Even if you are an enlightened person who believes in peace and justice, you don′t think that this requires integration with the native community. This is the reality the Zionist movement has built in the past 120 years.″

″Juliano, because of his personal circumstances, challenged daily the notion of segregation as peace, the notion of exclusion as peace, of autonomy as peace,″ Pappe continued. ″His legacy is one of humanity, one that does not contradict the project of liberation.″ 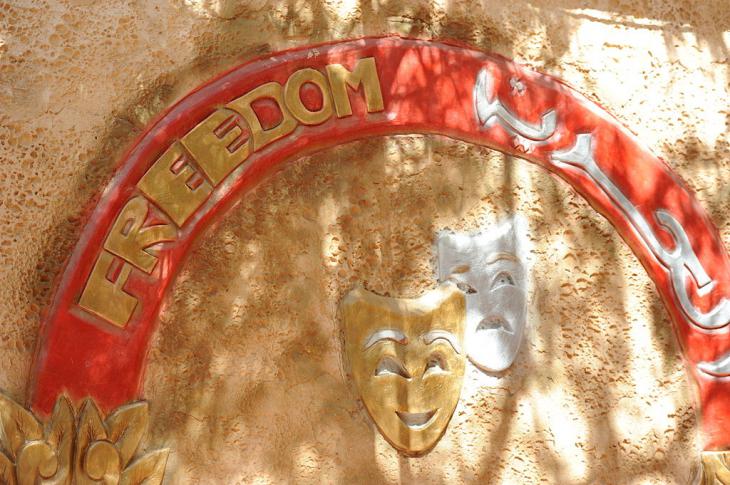 ″We have to reverse the conversation. Until today, it was Israel that talked about Palestinian rights, identity, narrative, and tried to direct. One of the most powerful acts of liberation is talking about the role of the settlers [third generation Israelis] in your future vision as part of enhancing your historical role as the native indigenous population,″ said Pappe, addressing the audience

″We have to reverse the conversation. Until today, it was Israel that talked about Palestinian rights, identity, narrative, and tried to direct. One of the most powerful acts of liberation is talking about the role of the settlers [third generation Israelis] in your future vision as part of enhancing your historical role as the native indigenous population,″ Pappe said, addressing the audience.

For Nabil Al-Raee, the theatre′s artistic director, the role of cultural institutions should be to do what political parties have been unable to – unify the Palestinians.

″People do not trust political parties anymore, or the leadership in general,″ Al Raee, who directed the theatre′s first production in 2006, admitted. ″In my opinion, the greatest alternative to unify the people and make them aware of what is happening is culture.″ That includes, according to Al-Raee, efforts to unify culture in order to go beyond the geographical fragmentation imposed on the Palestinians, not only through ad-hoc collaboration, but also at an institutional level.

″I am talking about being more together in a practical way that will at least give hope to the new generation. To unify and ask – what do we want?″

The outpouring of solidarity worldwide following the violent death of George Floyd should prompt us to step back and fundamentally question racist structures and privileges based ... END_OF_DOCUMENT_TOKEN_TO_BE_REPLACED

As he sees the first of his successes making its way towards local markets, Azem Abu Daqqa feels very positive. The launch of an agricultural project in the south of the Gaza ... END_OF_DOCUMENT_TOKEN_TO_BE_REPLACED

Mikhal Dekel’s father was part of a contingent of Jewish children who went on an odyssey from Poland to Iran as a result of the Holocaust. Dekel has now written a book exploring ... END_OF_DOCUMENT_TOKEN_TO_BE_REPLACED

From Syrian war crimes to U.S. hypocrisy in the Julian Assange case, the global "erosion of human rights standards" is of critical concern, UN Special Rapporteur on Torture Nils ... END_OF_DOCUMENT_TOKEN_TO_BE_REPLACED

Turkey is the second-largest exporter of TV series in the world, boasting a growing presence on international screens from Pakistan to Chile. The "dizis" offer audiences an ... END_OF_DOCUMENT_TOKEN_TO_BE_REPLACED

There were signs of a return to something akin to normality at the weekend as mosques in Saudi Arabia and the Al-Aqsa mosque in Jerusalem re-opened for the first time since COVID- ... END_OF_DOCUMENT_TOKEN_TO_BE_REPLACED
Date:
Mail:
Send via mail

END_OF_DOCUMENT_TOKEN_TO_BE_REPLACED
Social media
and networks
Subscribe to our
newsletter