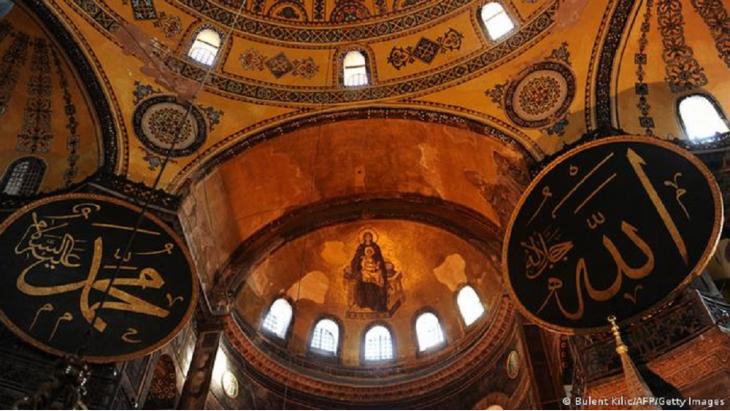 Jesus and Mary in the Koran
The message of mercy

Jesus – Issa in Arabic – doesn’t merely enjoy the highest place among the prophets in the Koran. He is also revered in Islam’s mystical tradition for his message of love and mercy. By Aziz Fooladvand

The blessed birth of Issa Massih, Jesus Christ, the messenger of peace, is a festival of light. His birth is a message of liberation for all mankind from its constraints, whether unconscious or externally imposed. On that day, a child saw the light of the world, and proclaimed: "and He hath made me blessed, wheresoever I may be" (Koran, Sura 19:31).

Jesus of Nazareth was chosen to "waken people to life", to open their "eyes and ears", to give them the strength to "arise", to walk, to act, to take their fate into their own hands and pit themselves against authorities of every kind. He is the light that shows us the way: "I am the light of the world. Whosever follows me will not walk in darkness, but will have the light of life" (John 8:12).

The Koran accords Jesus Christ – Issa Massih – the highest place among the prophets. In addition to his miraculous birth, he also performed miracles himself. Issa and his mother are described in the Koran as "a sign for all peoples" (Sura 21:91). In three places, the Koran refers to Jesus by the remarkable title kalimatollah, "Word of God". This title is used exclusively for Jesus (Suras 3:39 and 45; 4:171).

The position of Jesus Christ in Islam is a pre-eminent one. He is called the Spirit of God, ruh min allah, rasulollah, the Prophet of God, and kalimatollah, the Word of God (Sura 4:171). He is known in Persian and mystical literature for his healing dam (breath), with which he works miracles, heals and raises people from the dead. In two places, the Koran mentions the "bird miracle", according to which as a boy, Jesus brought birds made of clay to life, by fa anfokhu fihe "breathing his breath into them" (Suras 3:49 and 5:110). 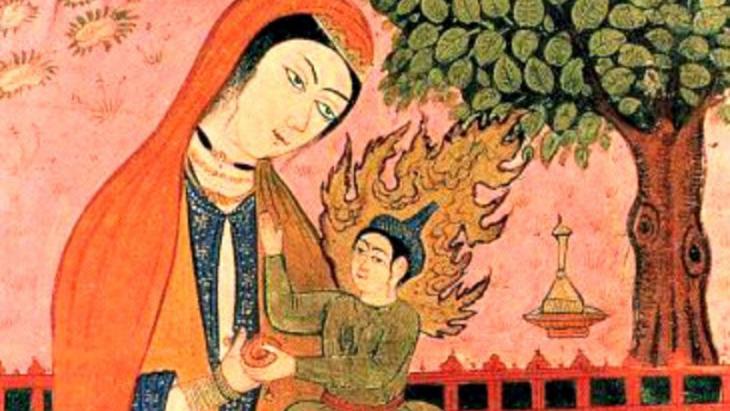 Mary with the infant Jesus in a Persian miniature. "The Koran accords Jesus Christ – Issa Massih – the highest place among the prophets," writes Aziz Fooladvand. "In addition to his miraculous birth, he also performed miracles himself. Issa and his mother are described in the Koran as 'a sign for all peoples' (Sura 21:91). In three places, the Koran refers to Jesus by the remarkable title 'kalimatollah', literally 'Word of God'"

The Persian Islamic scholar, mystic and theologian al-Ghazali (1066-1111) gives us the following anecdote: Jesus was walking with his hawariyoun (disciples), when they passed the corpse of a dog. "Ugh!" the disciples cried out, "What a stench!" At this, Jesus stopped to point out the dog’s gleaming white teeth. And Jesus chided his disciples and told them not to speak ill of the poor dog, explaining: "Do not speak anything but praise about God’s creatures."

In his part of the Roman Empire, Jesus, the itinerant preacher, appealed for communication without violence, and for an understanding between people based on deep love and mercy. He even extended this idea of mercy to his own torturers: "Father, forgive them, for they do not know what they are doing" (Luke 23:34).

Exclusivity and terrorism, by contrast, arise through ignorance, not to mention social and political illiteracy, and have a hate-filled mindset at their core.

Jesus Christ was seen as a sage who didn't just talk to people, but took action; someone who invested his message with thoughts, consciousness, planning and specific aims. This kind of communication was seen as social action with a specific agenda. And these aims represented a danger to the stability of the Roman Empire. "Give back to Caesar what is Caesar’s, and to God what is God’s!" (Matthew 22:21).

Be merciful: an instruction to mankind

Earthly authorities are called into question and their power limited, but at the same time they are also cast as our "neighbours", whom we should love as ourselves. This poses a great challenge, requiring an act of willpower that goes beyond our imagination. This idea of mercy is an instruction to mankind. Yet how far are we from enacting it in our own times?

With enjil, the "Gospel, wherein is guidance and light" (Sura 5:46), Issa (Jesus) confirms "that which was (revealed) before him in the Torah", which was sent to us for the salvation of all mankind. In this understanding, the prophets proclaim the same message from God in various historical contexts (Suras 14:4; 16:36).

Jesus Christ, the light of mercy that heals our hearts and opens our eyes and ears, who wants to bring us to life, is saddened by the state of the world and the actions of its people. He promised us blessedness. In his Sermon on the Mount, he promised justice to the hungry, thirsty and oppressed of this world; he promised the meek they would inherit the earth, promised mercy to the merciful, the kingdom of heaven to the persecuted, and comfort to those who were suffering. The project of freeing mankind from its personal, social, traditional, economic and political chains is still unfinished.

Aziz Fooladvand teaches Islamic religion at a school in Bonn. For him, Jesus is a central figure who connects Christianity and Islam. Jesus promised justice to the hungry, thirsty and oppressed of this world in the Sermon on the Mount. His birth is a message of liberation for all people from unconscious and externally determined constraints. Today, however, the region where Jesus worked is sinking, mired in hatred and religious intolerance. "This hatred is foreign to the spirit of monotheism in all its forms, and cannot be reconciled with the monotheistic understanding of faith," Fooladvand writes. "The dividing line in monotheistic teachings does not run between 'believers' and 'unbelievers', but between despots and tyrants on the one hand, and the socially weak and underprivileged on the other, independent of their religious, national or ethnic affiliation"

At the same time we should not forget his mother. Mary, or Maryam in Arabic, is the only woman who is mentioned several times by name in the Koran. The entire 19th Sura with its 98 verses is called Maryam. Jesus Christ is constantly referred to as the "son of Mary". The Islamic tradition – and Islam’s mystical literature in particular – sees her quite simply as the "holy" woman. The mercy of God appears in her, Maryam ozar, the "immaculate Mary", who prophesies: "From now on all generations will call me blessed, for the Mighty One has done great things for me – holy is his name" (Luke 1:48-49).

We venerate an exemplary woman, in whom the Holy Spirit (ruhon minho, رُوحٌ مِنْهُ, Sura 4:171) was incarnate, a woman who teaches us fortitude and has become a symbol of virtue for humanity. Despite the immense trials she faced, she walked the path that God had laid out for her with confidence, revealing her devotion.

Hatred and religious intolerance are now distorting the message of Jesus

The region in which "the God made flesh" defied the mighty Roman Empire 2000 years ago, where he proclaimed the message of mercy and love, "healed" people in the streets and houses, "opened the eyes of the blind" and raised the "dead", and where he sacrificed himself for this message, is today sinking, mired in hatred and religious intolerance.

This hatred is foreign to the spirit of monotheism in all its forms, and cannot be reconciled with the monotheistic understanding of faith. The dividing line in monotheistic teachings does not run between "believers" and "unbelievers", but between despots and tyrants on the one hand, and the socially weak and underprivileged on the other, independent of their religious, national or ethnic affiliation.

In the vision of the Koran, then, the dividing line falls between the people who embrace plurality and diversity, and those who demand exclusivity and reject the spirit of democracy.

Monotheism rejects any kind of infantilisation, any adulation of people, ideas or thoughts. God is the only valid guiding principle. God is rahma, mercy and love for humanity. In the Koran, God pledges his mercy to mankind: "Your Lord has prescribed for Himself mercy, so that if any one of you does an evil deed out of ignorance and thereafter repents and mends his ways, then (you will see that) He is Most-Forgiving, Very-Merciful" (Sura 6:54).

The Arabic word rahma is related to the word rahim. At its root, in both Hebrew and Arabic it refers to the mother’s body, specifically the womb. This gives the word "mercy" a strong emotional connotation. The womb is associated with warmth, love, tenderness and security. It is only with the light of mercy that we will succeed in shaping a peaceful world.

Aziz Fooladvand holds a doctorate in sociology and Islamic studies. He teaches Islamic religion at a school in Bonn. As an expert on Islamic fundamentalism, he is active in integration and prevention work and in the de-radicalisation of young people. He has also been an active member of Amnesty International for several years. Since 2009, he has been active in interreligious dialogue and as a speaker in schools, youth welfare offices, and as a volunteer refugee aid worker.

Since returning to power in Afghanistan, the Taliban have steadily eroded the rights and opportunities of women and girls, particularly their access to education. But Afghans are ... END_OF_DOCUMENT_TOKEN_TO_BE_REPLACED

The book "The Invention of the Maghreb: between Africa and the Middle East" prompts us to review basic terminology. This includes terms that we use almost every day as if they are ... END_OF_DOCUMENT_TOKEN_TO_BE_REPLACED

Tunisia has been going through a severe economic and political crisis in recent years. More than one in three young people there are unemployed. For many skilled, qualified and ... END_OF_DOCUMENT_TOKEN_TO_BE_REPLACED

At the end of every year, the team at Qantara.de gives you a run-down of the ten most-read articles on the site over the past 12 months. Here is a quick overview of the stories ... END_OF_DOCUMENT_TOKEN_TO_BE_REPLACED

The government in the Netherlands, one of the last European nations to abolish slavery, has made an historic apology. But some feel that there is still a long way to go. By Ella ... END_OF_DOCUMENT_TOKEN_TO_BE_REPLACED

To celebrate the bicentenary of the deciphering of the Rosetta Stone, the British Museum is running an exhibition entitled "Hieroglyphs: unlocking ancient Egypt" until February ... END_OF_DOCUMENT_TOKEN_TO_BE_REPLACED
Author:
Aziz Fooladvand
Date:
Mail:
Send via mail

END_OF_DOCUMENT_TOKEN_TO_BE_REPLACED
Social media
and networks
Subscribe to our
newsletter