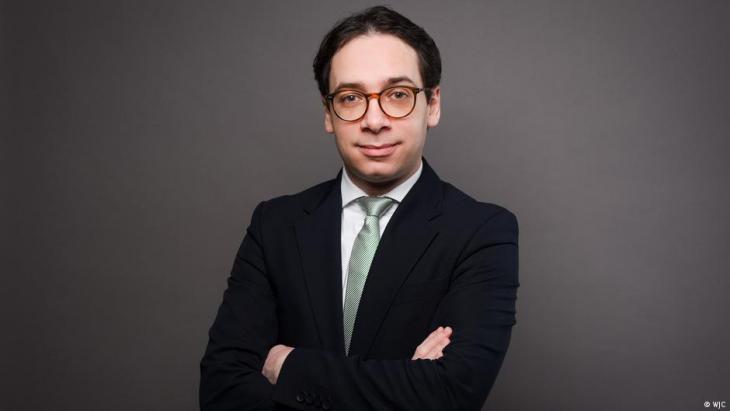 Hamburg lawyer Eugen Balin is a member of the World Jewish Congress' Jewish Diplomatic Corps. At the end of 2021, a delegation of the Corps visited the United Arab Emirates, which established full diplomatic relations with Israel in the summer of 2020. Interview by Christoph Strack

Mr Balin, what impressed you most in the Emirates?

Eugen Balin: We travelled to Abu Dhabi at the invitation of the United Arab Emirates (UAE) with 40 young diplomats from the World Jewish Congress with the aim of building bridges and forging links with all sectors of Emirati society. To this end, we met representatives from the government, the business community, the cultural sector and, of course, the local Jewish community. The overall impression was overwhelming. We had all followed developments in 2020 and the signing of the Abraham Accords with joy and hope. But the reality on the ground was vastly different from what I had imagined.

Balin: First of all, in terms of the warmth with which we were met. The words spoken by Emirati government representatives on the ground were directed at Israel and the Jewish people. None of us had expected that. Among our delegation were also people with roots in Arab countries who had once had to flee as Jews to save their lives. There were definitely a few tears.

Especially when, for example, a government representative explained that the Emirates' raison d'etat, based on the vision of the state's founder Sheikh Zayid bin Sultan Al Nahyan, includes harmony and tolerance, coexistence and innovation, to be implemented at all levels. That the Jewish community is not only welcome in the Emirates, it should also feel at home. That is quite unlike anything Jews in the Arab world have experienced before.

Balin: Our counterpart explained that the UAE seeks to be a place for all religions, for Jews and Christians, Muslims, Buddhists and Bahais. "If we don't have Jews here, then we would be missing something. You are part of us." That moved me. To paraphrase, "We don't just want you to be here. We want you to feel at home."

In terms of the state of Israel, it is about future relations at all levels, not simply at the formal governmental level. Society, economy and culture, specifically also exchange between young people and women. Such a rapprochement would be a strong basis for a peaceful future of coexistence. 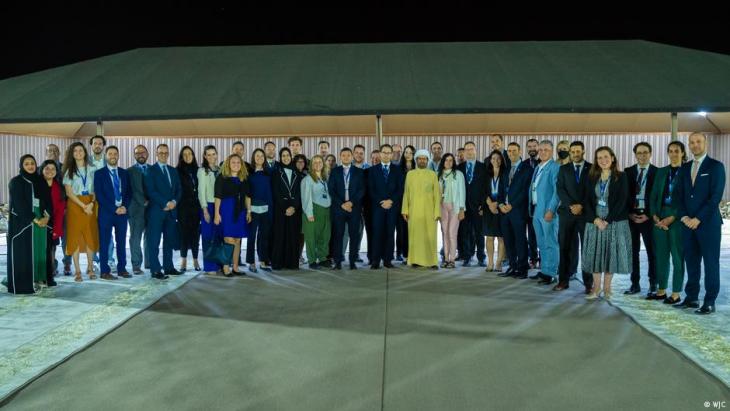 An overwhelming experience: "We travelled to Abu Dhabi at the invitation of the United Arab Emirates (UAE) with 40 young diplomats from the World Jewish Congress with the aim of building bridges and forging links with all areas of life in the Emirates," says Eugen Balin, a lawyer from Hamburg. The warmth was overwhelming, he says. "The words spoken by Emirati government representatives on the ground were directed at Israel and the Jewish people. None of us had expected that. Our delegation also included people with roots in Arab countries who had once had to flee as Jews to save their lives. There were definitely a few tears"

Just how credible is that? From a human rights point of view, the Emirates are certainly subject to criticism. It is not a democracy. And when it comes to the question of conversion, religious freedom has its limits. Are Israelis and Jews from European countries likely to go there enthusiastically anyway?

Balin: I believe so. I returned from this delegation trip transformed. For the first time ever I was in a country outside of Israel where I could move around completely freely with a World Jewish Congress delegation. Without any security precautions. Over the past twelve years this has never happened to us in any other country in the world. There we were in the market in Dubai, wearing our kippahs, recognisable as Jews and not in any danger at all. We spoke Hebrew, were cheerful and sometimes even loud. And we were greeted by vendors in a friendly manner and sometimes with "shalom". Israelis are not used to anything like that. Of course, there are now five or ten flights a day from Tel Aviv to Abu Dhabi and Dubai.

You felt less fear there than in Germany?

Balin: In Germany, France and other countries, it is not possible to travel openly as a Jew without putting yourself at risk.

You studied in France. Did you feel worse there than in the Emirates?

Balin: Absolutely. I studied in Aix-en-Provence in 2005 and 2006. At that time, in January 2006, Ilan Halimi, a young Jew, was kidnapped in Paris. Because the kidnappers thought all Jews were wealthy and wanted ransom. But the family was not wealthy. Halimi was tortured and massacred. And since then – you have to be objective – the situation in France has been getting worse and worse. Consider the attacks in Toulouse and Paris.

And, it is not just France, look at Brussels and Copenhagen. All over Europe, Jews are at risk. In the United Arab Emirates, on Shabbat, Friday evening and Saturday morning, we walked from our hotel to the synagogue for prayer. Wearing kippahs, some even wore their prayer shawls openly through the streets of Dubai, without security. In the mall, prayer in the synagogue was signposted, the doors were open. To experience this in an Arab country.... our preconceptions are at odds with reality. None of us expected anything like this.

It is indeed unusual....

Balin: And it fills me with hope. Community members here in Hamburg or leading representatives of the Jewish community in Germany are saying: This is something we would like to experience as well.

Women's empowerment in the Gulf has become a tool of deflection, rather than a genuine effort to promote women’s full and equal participation in society. By Mira Al-Hussain END_OF_DOCUMENT_TOKEN_TO_BE_REPLACED

A straightforward message emerged from last week’s meeting in the Negev desert of the foreign ministers of four Arab countries, Israel and the United States: Israel is key to the ... END_OF_DOCUMENT_TOKEN_TO_BE_REPLACED

A number of Arab League member states have announced in recent weeks that they intend resuming relations with the Syrian regime. A potential invitation to the Arab League summit ... END_OF_DOCUMENT_TOKEN_TO_BE_REPLACED

The catastrophic human rights situation in Bahrain is being largely ignored by the rest of the world. Despite all the damning evidence, which includes a Human Rights Watch report ... END_OF_DOCUMENT_TOKEN_TO_BE_REPLACED

Germany's foreign policy is explicitly values-based. But what happens, Ralf Bosen asks, when democracy, the rule of law and human rights collide with the logic of trade and ... END_OF_DOCUMENT_TOKEN_TO_BE_REPLACED

The rollout of coronavirus vaccines in the Middle East and North Africa is already taking place on a massive scale, with the United Arab Emirates leading the way. Nevertheless, ... END_OF_DOCUMENT_TOKEN_TO_BE_REPLACED
Author:
Christoph Strack
Date:
Mail:
Send via mail

END_OF_DOCUMENT_TOKEN_TO_BE_REPLACED
Social media
and networks
Subscribe to our
newsletter