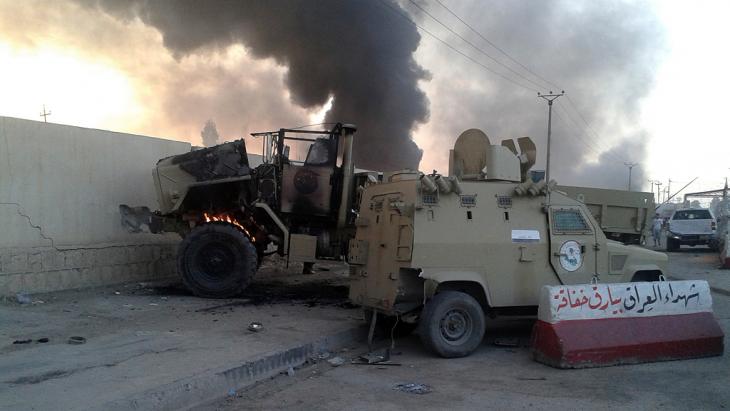 Wave of terror washes over Iraq

After the fall of Ramadi and Fallujah, the Islamist militants of ISIS have now seized Mosul, Iraq's second-largest city. Some 500,000 civilians are now fleeing the insurgents. The deputy prime minister has called it a security disaster. By Birgit Svensson in Baghdad

A new wave of terror is washing over Iraq. More than 150 people have been killed since last weekend, and more than a thousand injured. In the city of Ramadi in the western province of Anbar, the university was stormed and students were taken hostage. It was hours before the army managed to free them. Much blood was shed in the process. Meanwhile, bombs continue to go off in the eastern province of Diyala and in the capital, Baghdad.

Since Tuesday, 10 June, the insurgents have had their sights set on Iraq's second biggest city, Mosul. The governor's residence was stormed and some 2,400 prisoners were freed from prisons. While the governor was able to save himself at the last minute, 70 per cent of the city is said to be in the hands of terrorists. The government has, to all intents and purposes, lost control of Mosul.

The audacious operation was the work of ISIS (the Islamic State in Iraq and the Levant, which is also known as ISIL), an offshoot of al-Qaida that has been waging its war in both Iraq and Syria for at least the past six months. After Fallujah, Mosul is the second Iraqi city that ISIS has been able to seize. 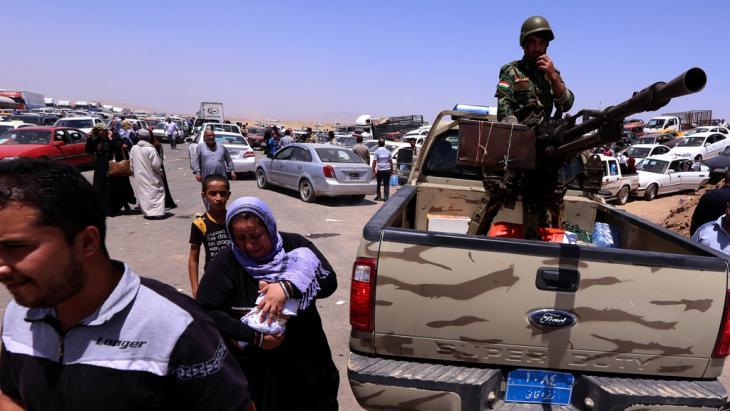 Utter chaos: residents of Mosul fleeing ISIS fighters at a checkpoint in Aski Kalak in Iraqi Kurdistan. According to international organisations, about 500,000 people fled Mosul, which has a population of about 3 million

"We have a security disaster," said Deputy Prime Minister Saleh al-Mutlaq, adding that the country's security forces have "collapsed". Mutlaq is from Fallujah, which is mainly populated by Sunnis and where ISIS has established itself. From here, it has even managed to conduct bomb attacks in the Bagdad suburb of Abu Ghraib.

In the run-up to the parliamentary election on 30 April, Prime Minister Nouri al-Maliki promised a comprehensive military operation to liberate Anbar province, in which Fallujah is situated, but nothing happened. Instead, ISIS has expanded its base of operations. That now appears to include the northern province of Nineveh and its capital, Mosul, 350 kilometres north of Baghdad.

Although Mosul was seen as al-Qaida's last stronghold, the alliance of tribal leaders known as Sahwa, convened by the Americans, pacified the area until US troops left at the end of 2011. Now, however, Baghdad says that the region is in utter chaos and that ISIS is aiming to take over the entire north of Iraq. Maliki's call – made on state TV – to convene the newly elected parliament and impose a state of emergency in the area sounds almost like an admission of defeat.

"You have to imagine," said Deputy Prime Minister Mutlaq, "the army has 1.5 million soldiers, and they can't establish calm and order?" Prime Minister Maliki, who is also commander-in-chief of the armed forces, failed to appoint a defence or an interior minister during his previous tenure.

When US diplomat Paul Bremer, who governed Iraq following the US-led invasion 11 years ago, dissolved the Iraqi army overnight, the Americans were forced to recreate the country's security forces. The aim was to ensure that all of Iraq's minorities were represented – a goal that was achieved. This meant that until three years ago, the Iraqi army had an exceptional reputation for neutrally protecting the nation's interests. 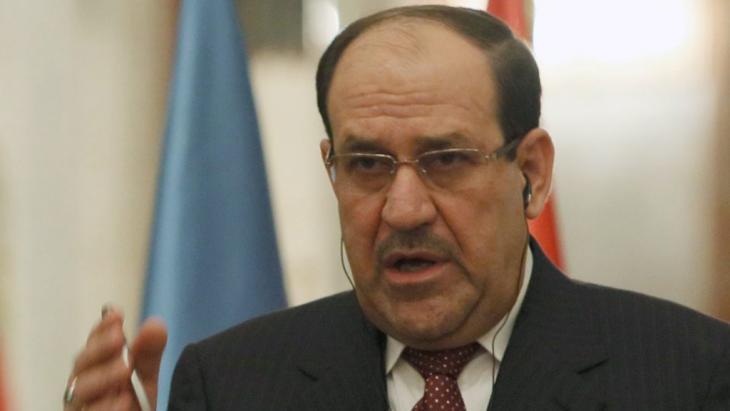 Too little too late? In the run-up to the parliamentary election on 30 April, Prime Minister Nouri al-Maliki promised a comprehensive military operation to liberate Anbar province from the Islamist jihadists. Nothing happened and they made comprehensive territorial gains. Now that the country's second city has fallen to them, al-Maliki has vowed to fight the jihadists and punish any members of the security forces that abandoned their posts

That has all changed: soldiers are now deserting the army in droves; entire battalions have laid down their arms. The Kurds in particular have almost entirely withdrawn from the army after Maliki picked a fight with the regional Kurdish government in Erbil over Kirkuk and control of Iraq's oil resources. In Mosul, dozens of mostly Sunni soldiers are said to have demonstratively taken off their uniforms and deserted their posts when ISIS moved in. It is clear that many Sunnis do not want to fight on the same side as a Shia prime minister who treats the concerns of the Sunni minority with contempt.

Maliki and his Sunni deputy, Mutlaq, have been at loggerheads for quite some time. Two-and-a-half years ago, Mutlaq described Maliki as a "failed dictator" and was suspended from his post as a result. Maliki revoked all licenses and authorisations for Mutlaq and his team and curtailed their right to travel.

Then Maliki found that he needed Mutlaq as a mediator in his hometown of Fallujah. The Sunni demonstrations that began there in December 2012 did not die down, and the protestors demanded a greater say: more participation in the political process and more positions in the army and police.

Mutlaq claims that his intervention back then prevented a civil war, but when he visited Abu Ghraib in April this year to talk to ISIS representatives, he narrowly escaped an assassination attempt with his life. It wasn't the terrorists that shot at him, he claimed, but members of the Iraqi army. Now, just a few months on, he is no longer sure a civil war can be prevented.

In his book "Ground Zero: 9/11 und die Geburt der Gegenwart" (Ground Zero: 9/11 and the Birth of the Present) Islamic scholar Stefan Weidner analyses the consequences of the ... END_OF_DOCUMENT_TOKEN_TO_BE_REPLACED

The rollout of coronavirus vaccines in the Middle East and North Africa is already taking place on a massive scale, with the United Arab Emirates leading the way. Nevertheless, ... END_OF_DOCUMENT_TOKEN_TO_BE_REPLACED

German Middle East analyst Guido Steinberg and television journalist Ulrich Tilgner have both published new books on the conflicts in the Middle East. Their analyses and their ... END_OF_DOCUMENT_TOKEN_TO_BE_REPLACED

The Pope’s journey to the "land between the rivers": places of terror and a dialogue to promote hope and optimism. His meeting with Shia Grand Ayatollah Ali al-Sistani was a ... END_OF_DOCUMENT_TOKEN_TO_BE_REPLACED

When Pope Francis sets foot in Iraq, he will be breaking historic ground while manoeuvring religious and political minefields. So will his foremost religious counterpart, Grand ... END_OF_DOCUMENT_TOKEN_TO_BE_REPLACED

Comments for this article: Wave of terror washes over Iraq

Re: Crisis in Iraq with advance of ISIS

I am of the opinion as follows:-
1) The perceived wrong Sunnis got from Shia Government (led by al-Maliki) has allowed
ISIS to strike at lightning fast speed, capturing Northern Cities & execution of prisoners!
2) Provided the Shia Government holds out the olive branch to the aggrieved Sunnis NOW, & join forces to repel the brutal invading Forces (mainly extremist militants) -- if need be 'Some' Representative Broker between these two Factions for a compromised deal to stop the common enemy to do further damage to the Country of Iraq,
3) If this "Deal" fails to happen, then al-Maliki (Shia Gov't) may ask Iranians to help to
fight both the Sunnis & invading Forces (alqaeda affiliate?),
4) Iran has the capacity together with Shia Gov't to put down ISIS & Sunni participants,
due to the superior armoury of the Iranians, ( they are almost a Neuclear power now),
5) In a scenario where Iran & Shia military alliance prevailing & winning the conflict in Iraq, over Sunnis & the Invaders,
6) It is possible that Syria, & Iraq will be joined in to form the "Greater Iran"-- an alliance
predicted in Ezek chapter 39 as an entity for the 3rd World War or Armaggedon!!
It is imperative a solution be found to bring about a reconciation between Shai & Sunnis before it's too late! --------------------------------------------------------------- humbly, BL

END_OF_DOCUMENT_TOKEN_TO_BE_REPLACED
Social media
and networks
Subscribe to our
newsletter