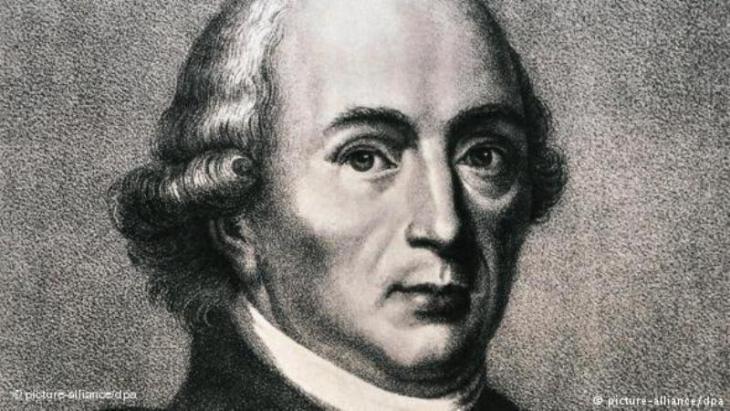 Johann Gottfried Herder and the Orient
Faith as silent spirituality

All his life, the German philosopher and poet Johann Gottfried Herder grappled with issues of the Orient and Islam, preaching his vision of a society shaped by humanity, tolerance and the individual, spiritual practice of faith. By Melanie Christina Mohr

In "Gedanken einer Orientalistin zu Johann Gottfired Herder" (An Orientalist′s Thoughts on Johann Gottfried Herder, 1994), the German Islamic studies scholar Annemarie Schimmel wrote: "Neither in Yemen nor Iran, neither in Bengal nor in Pakistan could the listeners understand how a poet who had never come face-to-face with an Arab, a Persian or an Indian could empathise with foreign peoples to such a degree in spirit and form [...]." Her remark gives us some idea of Herder′s special significance, even today.

When Johann Gottfried Herder was born on 25 August 1744, the philosophy of the Enlightenment had already catapulted the century into the modern age. Voltaire was approaching his 50th birthday, while Kant – who would later teach Herder – was studying philosophy, physics and mathematics among other subjects at the Albertus University in Konigsberg. Prussia was heading for the Seven Year War, America for independence and France for a revolution. In the Islamic calendar, the year was 1157. The Ottoman Empire had reached the geographical extent of its power and would continue to exist into the first quarter of the twentieth century, while the Persians were living under the short-lived rule of the Afsharids, who were replaced just a few years later by the Zand dynasty.

The European image of Islam in the eighteenth century was ambivalent. The first two translations of the Koran had appeared in 1694 and 1698, but the negative picture established prior to this, largely due to the Islamic faith having been consistently slandered, seemed to be deeply anchored in the Christian consciousness and relativising that image using these flawed translations was a slow process.

Arab fame: a "miracle of nature"

In 1710, Leibniz had pointed out the clear crossovers between the tenets of Christianity and Islam, but Voltaire made no secret of his religious aversion and manifested his dislike of the Prophet in his tragedy Mahomet, which portrays the founder of the faith as a liar and a charlatan. But this was also the century in which European Orientalism first began to flourish and slowly moved away from theology – with a lot of travel writing contributing to a better understanding of that "other", the Orient. 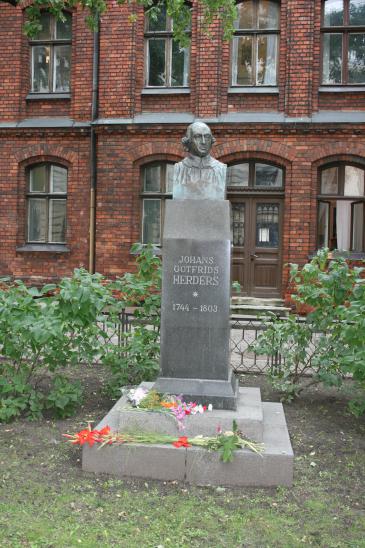 The Herder memorial in Riga: the German poet, philosopher and theologian Johann Gottfried Herder is a major figure of German intellectual history. His writings introduced and shaped the "Sturm und Drang" movement. Herder was born in Mohrungen on 25.8.1744 and died in Weimar on 18.12.1803

In the fourth and fifth chapters of his classic work Ideas on the Philosophy of the History of Mankind, Herder discussed what he believed there was to say about the Arabs and their Prophet at that time. The fame of the Arabs was to be understood as a "miracle of nature" – not as something initiated or consciously created – something that had merely waited for "the man to appear" who could make the Arab people "blossom".

The Koran – a mirror held up to Muhammad′s soul

Herder deliberately describes the Prophet – a "curious being and a mixture of all that nation, tribe, time and place could bestow" – as an individual, without any explicit divine connotation. "His Koran, this curious mix of poetic art, eloquence, ignorance, cleverness and hubris," was to be understood as a mirror held up to Muhammad′s soul.

But Herder personalised both the Koran′s content and its linguistic character and – much like Goethe – wanted the Prophet to be regarded as a poet. Faithful to his own beliefs – with all due respect to tolerance – he declared Protestantism to be the true faith and underlined this with an attestation that Muhammad and his faith community were "deceiving themselves".

Even so, this didn′t mean that Herder regarded Islam and its founder with displeasure – on the contrary, he believed that there was room for criticism in every well-founded study , as long as the necessary respect was maintained. The language, which he said had blossomed "long before Muhammad" and on which the pride of the whole people and the prophet was built, was the only thing Herder was willing to let himself be dazzled by.

Alongside the Koran, he also commends the fairy-tale and was keen to make it available to his readers, since it had made its mark "beneath the Eastern sky [as] the most marvellous element of the literary art".

Tolerance and reflection as features of faith

What makes Herder stand out, particularly in those times of vicious right-wing populism, is his pronounced sensitivity and the way he valued other cultures and ways of life. He was not only a committed anti-missionary, who understood faith as an "inner conscientiousness" – something that could under no circumstances be forced or accelerated – he also made no secret of the fact that he viewed the Church with scepticism, or even rejected it.

For him, it was a "political structure", an institution that should be regarded as separate from the essence of religion. It was no surprise, then, that Herder viewed the absence of a Muslim pope as an admirable thing. For him, faith embodied a kind of silent spirituality, not distinguished by a definite dualism, but manifested in tolerance and reflection. In his essay "The Oldest Document of the Human Race" (1774), he interpreted the Holy Scripture freely, recording at the end that it was "the oldest piece from the dawn of time" and – in defiance of his own faith – despite this, one of many.

According to Herder, humanity – to which he devoted a great deal of thought – was a latent, "undeveloped" quality in the individual. It was the character of the human race, he said and over the course of time was adopted and developed, ultimately distinguishing man from the animals. Gerhardt Schmidt gives a trenchant description of Herder′s imperative in an essay on the idea of humanity, calling it a "moral tautology" representing a smiling positivism, to be understood as a kind of bliss, which one should be in a position to celebrate without shame.

In his letters on the advancement of humanity, Herder regrets the fatal error of some of his contemporaries, who set the concept of humanity on a par with "lowliness, weakness and false pity". The term, he said, was even used with a look of disdain and "a shrug of the shoulders". With the utmost incomprehension and regret, Herder continues: "The lovely words ′human kindness′ have become so trivial [...] and yet this should be the goal of our striving."

This debasement of humanity should, by rights, be halted. Humanity and human kindness are – as Herder rightly stated – "the fine features of our existence" and as such they should be preserved and protected.

Home
Print
Newsletter
More on this topic
10th anniversary of the death of Annemarie Schimmel: Searching for the inner life of IslamKarl Wilhelm Friedrich and August Wilhelm Schlegel: The Orient – so near and yet so far Goethe and Islam: Religion has no nationality
Related Topics
Dialogue of Cultures | Intercultural Dialogue, Dialogue of Religions, History of Islam, History of the Near and Middle East, Islam and the West, Johann Wolfgang Goethe, Koran | Quran, Travels in the Orient
All Topics

Iranian artist Parastou Forouhar has lived in Germany since 1991. Full of rage, just like the protesters, she hasn't yet given up on the idea of justice. By Julia Hitz END_OF_DOCUMENT_TOKEN_TO_BE_REPLACED

Unflattering terms were used at a German Football Association human rights congress aimed at "intensifying the discussion" ahead of the World Cup. One speaker in particular made ... END_OF_DOCUMENT_TOKEN_TO_BE_REPLACED

Fariduddin Attar’s "The Conference of the Birds", one of the seminal works of Islamic mysticism, has recently been published in sumptuously illustrated German translation. It ... END_OF_DOCUMENT_TOKEN_TO_BE_REPLACED

Egyptian authorities have Mada Masr in their sights once again after critical reporting. But the editor of the country's last independent news source is adamant they will continue ... END_OF_DOCUMENT_TOKEN_TO_BE_REPLACED

Like Christianity, Europe's history is one of migration. Both have strong roots in the Orient and in cultures thousands of years old. Cultural historian Bernhard Braun invites us ... END_OF_DOCUMENT_TOKEN_TO_BE_REPLACED
Author:
Melanie Christina Mohr
Date:
Mail:
Send via mail

END_OF_DOCUMENT_TOKEN_TO_BE_REPLACED
Social media
and networks
Subscribe to our
newsletter