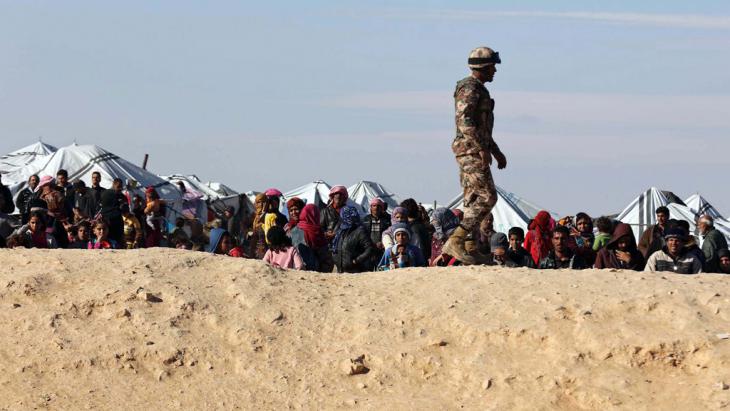 Jordan and the Syrian refugees

Across a great divide

In mid-2013, Jordan stopped letting Syrian refugees freely through its borders and shut all but two of the 45 informal crossings. The current policy of only permitting the war-wounded to enter the country, while in itself commendable, is separating families and leaving people with disabilities and in need of constant care to fend for themselves in Jordan. By Ylenia Gostoli

Aadia Oade prefers being called by her informal name, Um Salah, ″mother of Salah″ – from the name of her first son. Bound to a wheelchair and wearing a neck brace, she looks pensively out the window of the large, two-storey detached house in the Amman periphery she has been calling home for over a year. Four years ago, the place was turned into a rehabilitation centre for war-wounded Syrian refugees.

Um Salah hasn′t seen her husband and six children since she was taken to Jordan for treatment. When a bomb hit her home in Dera′a, Syria, it left her paralysed. Her family – her children are aged three to twelve – was not allowed to cross the border with her. Only the war wounded and other exceptional cases are allowed to use the crossings at the western end of the Jordanian-Syrian border.

The rest go to Rukban and Hadalat, in the east. But Jordan has only been allowing a trickle of people in and makeshift camps in these two desert posts are now housing an estimated 59,000 and 7,000 people respectively – the majority of whom are women and children in dire humanitarian conditions, according to aid workers. Jordan deems these camps a security threat, arguing that many of the asylum seekers come from IS-controlled areas. There is a burgeoning humanitarian crisis at the border and the number of stranded refugees has been rising dramatically from 12,000 last December.

″I was taken directly from a field hospital to the Tel Shihab border crossing, where they wouldn′t let me into Jordan without an ID. My husband went back home and brought it, but he couldn′t come. They were only letting patients through,″ Um Salah recalls of her journey. 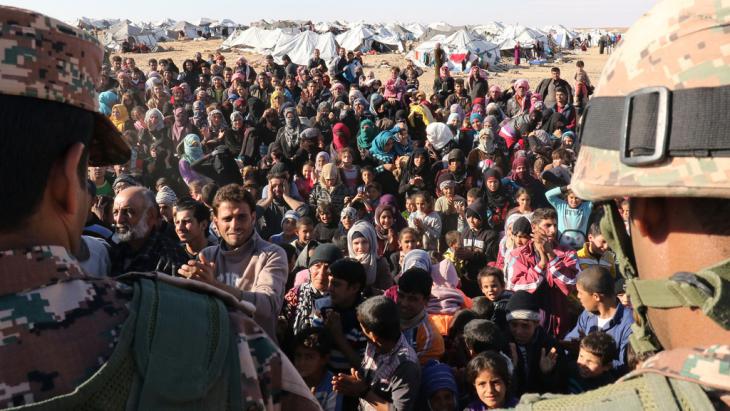 The two desert posts of Rukban and Hadalat: Jordan has only been allowing a trickle of people to cross the border and makeshift camps are now housing an estimated 59,000 and 7,000 people respectively – the majority of whom are women and children in dire humanitarian conditions. Jordan deems these camps a security threat, arguing that many of the asylum seekers come from IS-controlled areas

According to a report published last April by Amnesty International, one or two war-wounded people were denied entry at the Tel Shihab border in 2015 on a daily basis, in violation of the principle of non-refoulement, which prohibits governments from sending asylum seekers back to a country where they would be in danger. The main reason, according to the humanitarian workers Amnesty interviewed, is that they did not have an ID when they arrived at the border, with some cases being sent back due to the fact their injuries were not assessed as life-threatening. Assessments, however, have sometimes been made by officials who are not professional medics. There have been a few cases of death at the border.

Um Salah asked the UNHCR, the UN refugee agency, to intervene to bring the rest of the family to Jordan a year ago, but was told that first they would have to make it to the border.

″It′s harder now. My husband has diabetes. When they get to the border, they might have to wait one month. Without medicine and with six children it′s difficult,″ Um Salah said.

In mid-2013, Jordan stopped letting Syrian refugees freely through its borders and shut all but two of the 45 informal crossings. It remains the only neighbouring country with an organised support programme for treatment of war-related injuries – among the patients are both civilians and combatants. However, the policy of only letting in the war-wounded, while in itself commendable, is separating families and leaving people with disabilities and in need of constant care to fend for themselves in Jordan.

According to NGOs Handicap International and HelpAge International, 26% of Syrian refugees in Jordan have some form of impairment, mostly deriving from war-related injuries. Some of the war-wounded require post-surgery rehabilitation, which is not available on the Jordanian public health service. In addition, the introduction of user fees for Syrians in 2014 has made it more difficult for them to access the services available.

Fees may not seem high, but the vast majority of Syrian refugees living in Jordanian cities – 80 percent of the Syrian refugee population in Jordan – live below the poverty line. According to Amnesty′s report, they are facing increasing barriers in accessing health care in Jordan, with at least 58.3% of adults with chronic conditions unable to access medicines or other health services. 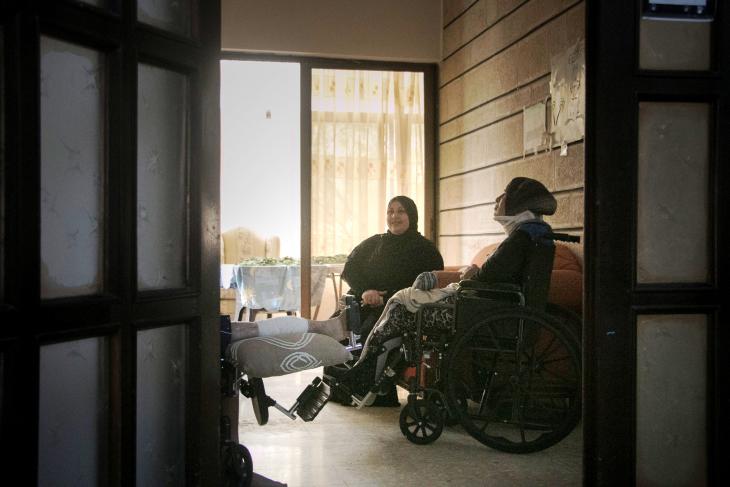 A desperate situation: "according to NGOs Handicap International and HelpAge International, 26% of Syrian refugees in Jordan have some form of impairment, mostly deriving from war-related injuries. Some of the war-wounded require post-surgery rehabilitation, which is not available on the Jordanian public health service," writes Gostoli

More than 630,000 Syrian refugees are registered with UNHCR as residing in Jordan, but the actual number may be double that.

NGOs are also stretched. In the report, MSF (Medecins Sans Frontieres), which runs clinics across the country, including in the refugee camps, is quoted as stating that it does ″not have the capacity to address the specific long-term and permanent needs of war-wounded with spinal injuries.″ They therefore rely on privately-run and funded centres such as Souriyat Across Borders, which offers free physiotherapy and a host of other services. It currently accommodates 28 patients.

It was MSF that referred 15-year-old S. to the clinic. She no longer goes to school, as her condition makes it hard to access it, but she gets private lessons and is learning English at the centre. She lost a leg below the knee when her home in Dera′a was shelled.

Over two years ago, an uncle took S. and her 10-year-old brother A., from the border to Al-Makassed hospital in Amman, where she underwent the operation. The three lived in Zaatari refugee camp for a few months, but when the uncle died of a stroke, the two siblings found themselves alone in Jordan. Their parents, eight sisters and four brothers are still in Syria and unable to join them.

S., a quick-witted girl with blue eyes, now moves briskly on her crutches, her movements confident and sharp.

″I′m not lazy,″ she snaps when gently rebuked by one of the administrators of the centre for favouring drawing over studying.

She takes out some of her pictures. One depicts a vase containing a teary eye. A poem below it says, ″I speak to the sea, my tears are wider than the sea.″ Some of her drawings, she says proudly, were part of a recent exhibition.

After her physiotherapy session in the morning, S. hangs out with A., a girl roughly her age, whose father left Zaatari refugee camp illegally in order to be closer to his daughter. Syrian refugees can only leave Zaatari with the help of a Jordanian bailout sponsor, who must submit a legal guarantee. 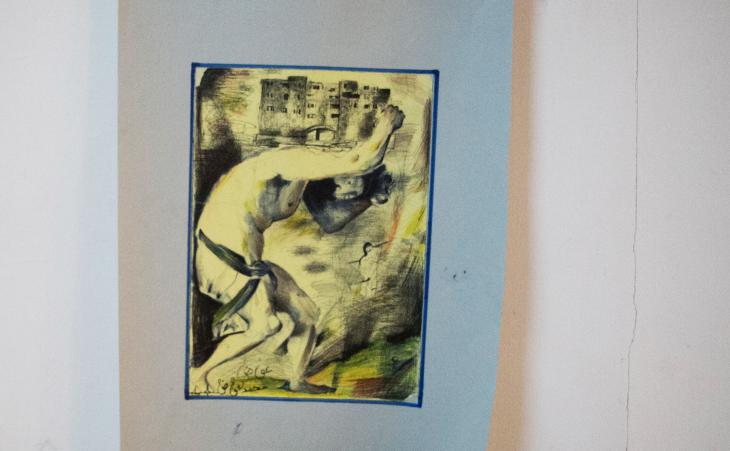 As of November 2015, UNHCR reported that there are 4,289,994 Syrian "persons of concern" of whom 630,776 are registered as refugees in Jordan. There are about 1.4 million Syrian refugees in Jordan, only 20 percent are living in the Zaatari, Marjeeb al-Fahood, Cyber City and Al-Azraq refugee camps

According to Amnesty International, Jordanian authorities shut down at least two rehabilitation clinics in 2014, allegedly for operating without a licence. Nisreen Katbi, director of Souriat Across Borders, said they are one of the few that survived the crackdown two years ago.

″Almost all of our patients are here alone,″ Katbi explained. ″And the majority want to return to Syria upon leaving.″ Between May and September 2015, there was an increase in the number of Syrian refugees choosing to return to Syria. Although some might be combatants who return to fight, others do so in order to be reunited with their families.

The response of the international community to Jordan′s appeal for assistance far from meets the country′s needs. At the end of 2015, only 26% of Jordan′s funding requirements for health had been met. Human rights groups, including Amnesty International, have been calling on the international community to step up the resettlement of refugees, particularly the vulnerable or those in need of medical treatment. Only just over 10 percent of refugees fleeing Syria have attempted the perilous journey to Europe.

Um Salah said that if her family cannot come to Jordan, she would rather return to Syria once she leaves the rehabilitation centre. Once refugees leave Jordan, they will not be allowed to re-enter legally.

″I would like them to come here, or go anywhere. But if that′s not possible, I′d rather go back,″ she said.

Home
Print
Newsletter
More on this topic
Interview with Andre Bank, political scientist: "The refugees are part of Jordanian politics"Jordan and the influx of refugees: The true SamaritansCamps for Syrian refugees in Zaatari and Atma: Cut off from the rest of the world
Related Topics
Policy on refugees and migration, Refugees, Syrian Civil War
All Topics

They’ve already got the Louvre; they’ll soon have a Guggenheim Museum as well – and now the Emirates have added literature to their quest for cultural supremacy in the Arab world ... END_OF_DOCUMENT_TOKEN_TO_BE_REPLACED

The rollout of coronavirus vaccines in the Middle East and North Africa is already taking place on a massive scale, with the United Arab Emirates leading the way. Nevertheless, ... END_OF_DOCUMENT_TOKEN_TO_BE_REPLACED

Faced with a deteriorating economy and a discontented populace, Jordan's ruling family is feeling the pressure. END_OF_DOCUMENT_TOKEN_TO_BE_REPLACED

Founded in 1921 as a temporary solution, Jordan managed to establish itself as one of the most stable countries in the Middle East. The inclusive and flexible approach taken by ... END_OF_DOCUMENT_TOKEN_TO_BE_REPLACED

German Middle East analyst Guido Steinberg and television journalist Ulrich Tilgner have both published new books on the conflicts in the Middle East. Their analyses and their ... END_OF_DOCUMENT_TOKEN_TO_BE_REPLACED

Comments for this article: Across a great divide

A day not possible without the grandfather of ‪#‎KingAbdullahII‬ (on his father's side) ‪#‎PrinceTalal‬ forming the government and constitution of the ‪#‎HashemiteKingdom‬, then afterwards being checked into a mental institution by the British government in the ‪#‎UK‬ after attempting to murder his ten year old son and his wife.

And a day, impossible without the grandfather of #KingAbdullahII (on his mother's side) ‪#‎WalterPercyGardiner‬ fighting against Palestinians for the British in 1936.

END_OF_DOCUMENT_TOKEN_TO_BE_REPLACED
Social media
and networks
Subscribe to our
newsletter