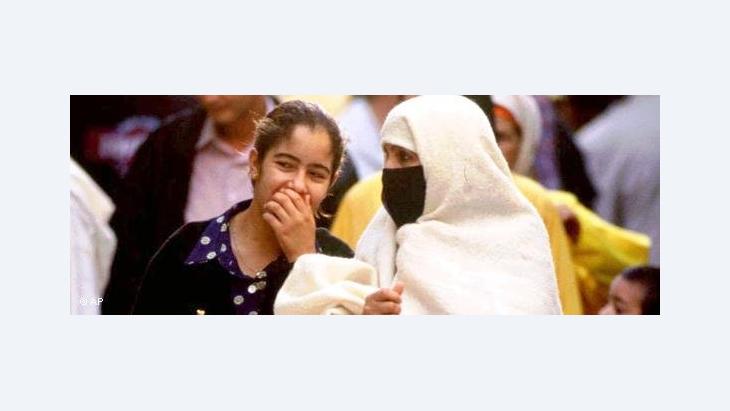 Journalists with Headscarves in Morocco
Kept under Cover

As in many other Muslim countries, increasing numbers of women in Morocco are entering the labour market. Among these women, there are many who wear headscarves. However, there would appear to be an unwritten rule in Moroccan radio and television that women in headscarves should not be employed in these media. Siham Ouchtou reports

﻿Many Moroccan women wear headscarves, and the number has increased considerably in recent decades. It's a tendency that can be seen in the workplace, and especially in the media, where a growing number of women with headscarves work. Some of them have been covering their heads since they started their professional careers; others only chose to do so at a later stage. But they all pay a high price for their decision, especially those who work in radio or television.

Halima Abrouk is one of them. She's been through journalism school and now works for a Moroccan newspaper, but she originally wanted to work for radio or television. As she told Qantara.de, "I had hoped to find a place in the audio-visual media, but when I graduated, it quickly became painfully clear to me that that would be very difficult, if not impossible, as long as I wore a headscarf. This is especially true in television, where, aside from a few editorial areas, no-one with a headscarf can get a job. You certainly never see one on screen."

Abrouk had to give up her dream of working in her chosen area of the media profession, and she took a job in print, where, she says, there are no restrictions on women who wear headscarves. But Abrouk still doesn't know why such women can't get jobs in radio. 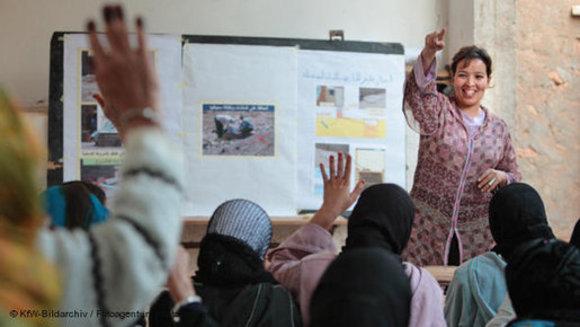 The French concept of laïcité in Islamic Morocco: although the majority of women in Morocco wear headscarves, very few of them work in radio and television, even though they cannot be seen in radio broadcasts

"You can justify the rejection of presenters with headscarves on television as a way of ensuring that no specific ideological cliché is broadcast," she points out, "but that's completely incomprehensible on radio, where no-one can see the women and the listeners don't know what they look like."

She says that it's very rare for a Moroccan radio station to employ a woman with a headscarf, however qualified she may be. Appearance is often considered more important than ability. "Even when we are given a job," she adds, "the numbers remain very small, as if we were just a token. It would be completely unthinkable for even half the women to wear headscarves."

In response to the argument that headscarves on television would convey a certain religious image, she says: "That's a very flimsy argument: there's nothing you could have against it in a Muslim country like Morocco. Not everyone who wears a headscarf holds a particular ideology. But the decision-makers in the media decide according to outward appearances, even if the person involved is in full agreement with them on other issues."

The French concept of laïcité in the Moroccan media

There's no law that prohibits the employment of women with headscarves in the Moroccan media, but it has become so normal that everyone knows that women with headscarves have no place on Moroccan television. No-one has ever seen a woman with a headscarf presenting on television, with the exception of specifically religious programmes. And even though there is only this unwritten rule, every now and again one hears public complaints from people in the Moroccan media that they can't get a job in radio or television because of their headscarves. Even women who were well-known on television have disappeared from the screen because they decided to wear a headscarf. Journalists have even been sacked for this reason alone. 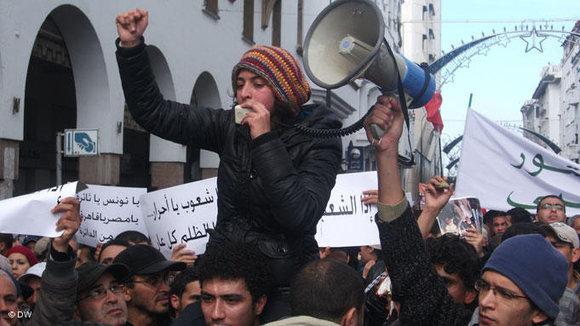 A Moroccan woman speaking through a megaphone during a protest on 20 February 2011: even well-known woman television presenters who were fired because they chose to wear headscarves are keeping quiet about the situation

​​Mustafa al-Ramid, who is a leading member of the opposition Islamist Party for Justice and Development, told Qantara.de: "The reason is simple: the people who are in charge of Moroccan television are supporters of the French concept of laïcité, which rejects the visible presence of religious symbols in the media. So the fact that a woman wears a headscarf is enough to have her taken off air." And, says al-Ramid, that applies even when she is clearly qualified.

Al-Ramid goes on to say that "those with influence have their own rules and don't need a law to justify themselves. They just use their power and their authority. Unfortunately we don't live in a state that is so democratic that such arbitrary behaviour doesn't occur."

The situation, he says, is only made worse by the fact that those affected keep quiet about it. They don't go to the media or to the courts to challenge those in charge, and that makes it easier for such behaviour to continue and be accepted.

Al-Ramid says that, as a party with Muslim values, his party is currently talking about the issue with the government, "but every case we raise is rejected because the people affected remain silent and won't speak publicly about their experience, so that we can't bring any evidence to back up our arguments to the relevant authorities."

According to Aziz Bakoush, "a headscarf would make a journalist seem introverted and shy and would convey a completely unclear and confused complex of emotions, which would make it impossible to deal with her in a relaxed way"

A political and ideological conflict?

Those who oppose the employment of women with headscarves on Moroccan television argue that they are concerned that a station that broadcast a programme with a women presenter in a headscarf would find itself with a religious image. They say that a presenter who wore a headscarf and who reaches an audience of millions could offer a veiled ideological message.

The Moroccan writer Aziz Bakoush believes that women who wear headscarves would not have brought anything positive to Moroccan media – in fact, he feels that the opposite would be the case: "A headscarf would make a journalist seem introverted and shy and would convey a completely unclear and confused complex of emotions, that would make it impossible to deal with her in a relaxed way."

Bakoush explains that a woman journalist does not give up her identity if she removes her headscarf, and that not wearing a headscarf is the expression of a secular modernity that is socially desired in Morocco. Morocco may be a Muslim country, he says, but it's also a modern, secular state. As he points out, "Each country has a specific way of thinking about things that it wishes to convey, and Princess Lalla Salma, the wife of Kind Muhammad VI, who himself carries the title 'Ruler of the Faithful', does not wear a headscarf at international events."

For Bakoush, women who wear headscarves in the media personify an ideology defined by certain political conditions, especially since the arrival of satellite stations, above all Al-Jazeera. Bakoush's conclusion is clear: "For me it's all just a political and ideological conflict; there's no other explanation for it."

Home
Print
Newsletter
More on this topic
The Niqab Debate in the Maghreb: A Negation of Women or Religious Freedom?Opus Prize for Aicha Chenna: ''Secular in My Head, Muslim in My Heart''Qantara dossier: The Headscarf Debate
Related Topics
Freedom of religion, Freedom of the press, Human rights, Media in the Arab World, Muslim women, New media in the Muslim world, The Headscarf Controversy
All Topics

Sultana Khaya, 41, has been peacefully resisting the Moroccan occupation of Western Sahara for many years. Because of her campaign to assert the self-determination of the Sahrawi ... END_OF_DOCUMENT_TOKEN_TO_BE_REPLACED

Back in 1995, when The Times asserted Islam was to blame for the poor levels of education among women in the Muslim world, Mohammad Akram Nadwi began scouring ancient Arabic ... END_OF_DOCUMENT_TOKEN_TO_BE_REPLACED

Since Spain abandoned its traditional neutrality towards the conflict in Western Sahara, Morocco has announced a "new phase" in relations between the two countries. But what is ... END_OF_DOCUMENT_TOKEN_TO_BE_REPLACED

Tunisia's president has been carrying out a coup by degrees, demolishing the country's hard-fought democratic gains bit by bit. With an economy in turmoil and a splintered ... END_OF_DOCUMENT_TOKEN_TO_BE_REPLACED

The German government is planning to legalise cannabis before the end of this legislative period. So what does Islam have to say about its consumption? Will changing the law alter ... END_OF_DOCUMENT_TOKEN_TO_BE_REPLACED
Author:
Siham Ouchtou
Date:
Mail:
Send via mail

END_OF_DOCUMENT_TOKEN_TO_BE_REPLACED
Social media
and networks
Subscribe to our
newsletter