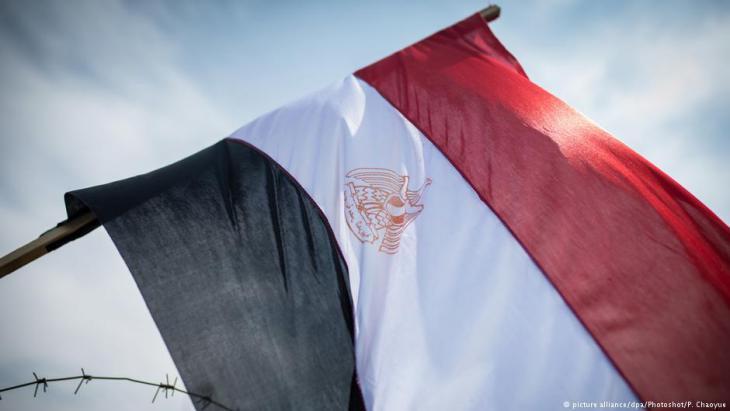 Justice under Abdul Fattah al-Sisi
The law′s an ass

During the Mubarak regime, there were about four per year. Under Mubarak, most sentences were issued for murder or drug-related charges and were rarely carried out. However, since the military government came to power in July 2013 most of these death sentences – 1284 people between 2014 and 2016, according to Amnesty International, up from 109 in 2013 and about 180 per year under Mubarak – were protesters accused of allegedly forming terrorist cells and subsequently charged with threatening national security. Although these cases vary widely in their circumstances and seriousness, they all involve a violation of the principles and rules of a fair trial.

Under secret service lock and key

Most of the cases are based on investigations instigated by Homeland Security – the domestic intelligence agency known before the January 2011 revolution as State Security, which has long been the government′s primary weapon in crushing political opposition. Homeland Security cases are frequently based on confidential sources, which intelligence agents keep hidden even through the final stages of a trial. 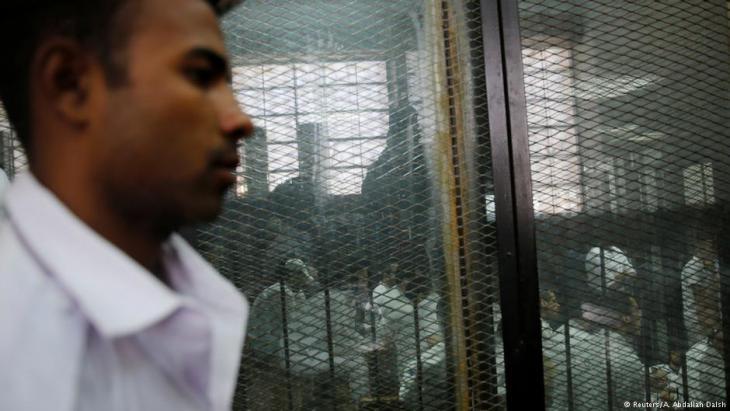 Regime opponents subjected to politically motivated, arbitrary trials: "Most of the cases are based on investigations instigated by Homeland Security – the domestic intelligence agency known before the January 2011 revolution as State Security, which has long been the government′s primary weapon in crushing political opposition," criticises Sherif Mohy Eldeen

In most cases, this means death penalties and life sentences are based on sources unknown to anyone but the intelligence agents themselves – not even to the judges.

The case of the ″Mansoura Six″, for whom the court reaffirmed the death penalty on 7 June, is a telling example. After reviewing the court documents, the Switzerland-based Committee for Justice highlighted eight different types of violations in a damning report on the case. Several of the defendants stated that they had been forcibly disappeared, not officially arrested and the circumstances and dates of their detentions vary sharply from the official story. In addition, they gave accounts of torture and claimed they were forced to confess.

They later retracted these confessions once they were transferred to public prisons, not Homeland Security′s own informal detention centres, where many forcibly disappeared detainees are kept until charges are made and where torture is more prevalent than in public prisons.

The confessions were videotaped beforehand and broadcast by the Ministry of Interior before the prosecutors concluded their investigations. Defendants were not given access to attorneys during interrogations and the case too relied on confidential sources as the main evidence to the civilian court. These sources were still not disclosed at any point during the trial.

Petition against the death sentence

Activists campaigned to stop the execution of the Mansoura defendants based on the lack of a fair trial and gathered over 15,000 signatures on an online petition asking Egyptian President Abdul Fattah al-Sisi to exercise his legal right to commute the death penalty within 14 days of a final ruling, but to no avail. Sisi instead appointed Magdy Abul Ela as president of the Court of Cassation. Abul Ela was the judge who would have presided over the appeal of the Mansoura Six sentences, but notably turned down the defence attorney′s request for it. This in itself was a rare occurrence, as the Court of Cassation since July 2013 had typically agreed to try appeals of death sentences in blatantly politicised cases. 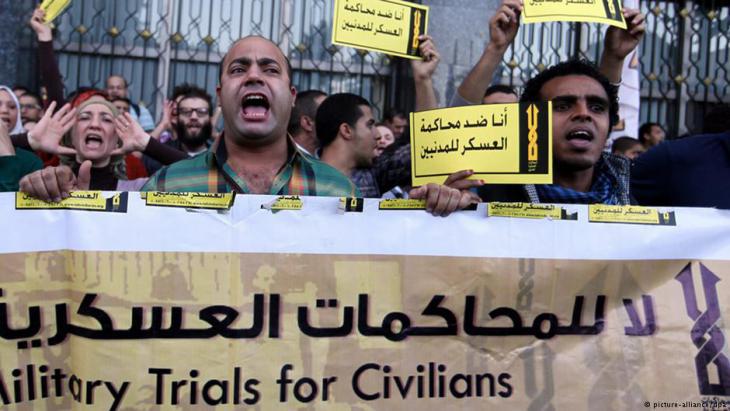 Demonstrating against military tribunals in Egypt: following the attacks on Sinai in October 2014, President al-Sisi greatly expanded the powers of the military courts. Human rights groups such as Human Rights Watch (HRW) continue to complain about the swift sentencing and unfair penalties imposed by Egyptian military tribunals. Verdicts are often arbitrary, punishments draconian

The flaws in the court proceedings in the Mansoura case are illustrative of a disturbingly common pattern for hundreds of similar cases since July 3, 2013, both in civilian and military courts – the latter having been greatly expanded since 2014 to put thousands of civilians on trial.

Most of these trials are based on unsupported or minimal evidence. An example is the military trial of the seven alleged bombers of a War College bus in the Kafr el-Sheikh stadium.

The Supreme Court of Military Appeals in Cairo reaffirmed the death penalty for the accused on 19 June, even though the military investigation admitted that it ″had not identified the incident′s perpetrator, as there were no cameras at the bombing site and… it was difficult from camera number one to identify the incident′s perpetrators due to the distance and impediments to the line of sight.″

Fakih Abdel-Latif, a middle school science teacher in Kafr el-Sheikh, was one of the defendants sentenced to death. The Egyptian Initiative for Personal Rights, an independent NGO, obtained an official statement from the provincial school district stating that he was at school all day long during the attack on 15 April 2015.

This directly contradicts the Tanta military prosecutor, who alleged that Abdel-Latif was present at the scene of the bombing. Likewise, the defendants in the Arab Sharkas case were executed even after local NGOs offered evidence that at least three of the six young defendants were already being held by the Ministry of Interior at the time of the attacks. 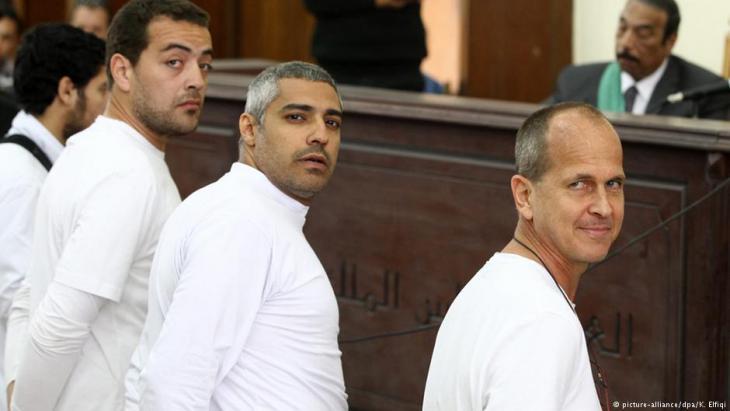 Freed following 400 days detention: in June 2014, the Al Jazeera journalist Peter Greste was sentenced – along with several other Al Jazeera colleagues – to several years in prison, supposedly for sympathising with the Muslim Brotherhood. The sentence triggered severe international criticism. Greste was released following a presidential pardon issued by Abdul Fattah al-Sisi and returned to his home country of Australia

In addition to the systematic violations of fair trial standards, there are a number of examples that suggest these death sentences and subsequent executions are politicised and retaliatory.

One glaring example is the execution of six young defendants in the Arab Sharkas case on 17 May 2015, the day after an attack on judges in Arish in the northern Sinai. Their families had no prior warning and the execution was carried out despite a pending appeal, just as an administrative court was in the process of issuing a stay of execution.

However, apparently Sisi′s regime was more interested in demonstrating a heavy hand in the wake of the Arish attack. In a similar case, Adel Habara – the alleged mastermind sentenced to death for an August 19, 2013 attack on military conscripts in northern Sinai known in the media as the ″Second Rafah Massacre″, in which 25 soldiers were killed – was executed on 15 December 2016, four days after a suicide bomber killed 29 at the St. Peter and St. Paul′s Church in the heart of Cairo.

The timing of Sisi′s approval of the pending judicial order for his execution appeared to be part of the government′s reaction, even as the investigation into who was responsible for the church bombing was ongoing.

The disregard of fair trial standards has led to thousands of harsh sentences, including the death penalty. That Homeland Security carries out these investigations instead of the national police force demonstrates that the legal system is more concerned with sending a message of fear and intimidation than with carrying out justice.

Egypt had known severe repression under Mubarak, but the justice system had managed to maintain some degree of autonomy and, more importantly, trust. Today, the unlawful trials, the heavy sentences and the quick executions – at times without informing family members – are all eroding what little trust Egyptians have left in their justice system and government.

Sherif Mohy Eldeen is a researcher on counter-terrorism, security studies and political sociology.

Palme d’Or winner "Boy from Heaven" is a classic crossover film in which cultural elements are mixed together in haphazard and random fashion. Shady Lewis Botros bemoans the ... END_OF_DOCUMENT_TOKEN_TO_BE_REPLACED

In Doha, Arabs from Morocco, Tunisia, Egypt and Algeria are gathering to celebrate the first ever FIFA World Cup to be held on Arab soil. The criticism from Europe? Over the top, ... END_OF_DOCUMENT_TOKEN_TO_BE_REPLACED

November 2022 sees the Arab world firmly in the spotlight with the COP27 in Egypt and the FIFA World Cup in Qatar. Public trust in MENA governments is weak, thanks to their ... END_OF_DOCUMENT_TOKEN_TO_BE_REPLACED

COP27 in Sharm el-Sheikh is turning into a PR disaster for Egypt’s military regime. Instead of praise for the host, the news is full of solidarity for imprisoned activist Alaa ... END_OF_DOCUMENT_TOKEN_TO_BE_REPLACED

END_OF_DOCUMENT_TOKEN_TO_BE_REPLACED
Social media
and networks
Subscribe to our
newsletter